In March 2020, Métis artist Nathalie Bertin turned to social media with a question: “Why haven’t I seen any beaded masks?” This led her to Lisa Shepherd, a fellow Métis artist. By the end of that month, the artists had co-created “Breathe: A collection of traditionally crafted masks demonstrating resiliency through 21st century pandemic.” On April 6, the project went live on Facebook as a group page and a platform for Indigenous artists to create and share beaded masks in their traditional style.

"Within the first two weeks, I think, we had over a thousand members from all around the world," says Bertin. "Within two or three weeks, we started seeing these amazing creations with the most incredible stories.”

The Breathe project inspired the Tsi Tyónnheht Onkwawén:na Language and Cultural Centre and the Enyonkwa’nikonhriyo:hake (Good Minds) program in Tyendinaga Mohawk Territory to invite beaders in their community to create Rotinonhsyón:ni-style masks. “It’s been important to engage the community because language, culture — those connections — can be very healing for people,” says Erica Gray, administrative assistant at TTO.

Bertin and Shepherd were thrilled to hear that the community had been inspired. “That’s what it's about,” Bertin says. “Communities coming together to help one another.”

TVO.org spoke with 12 of the 46 beaders in Tyendinaga who participated in the Breathe-inspired challenge about the stories behind their masks. 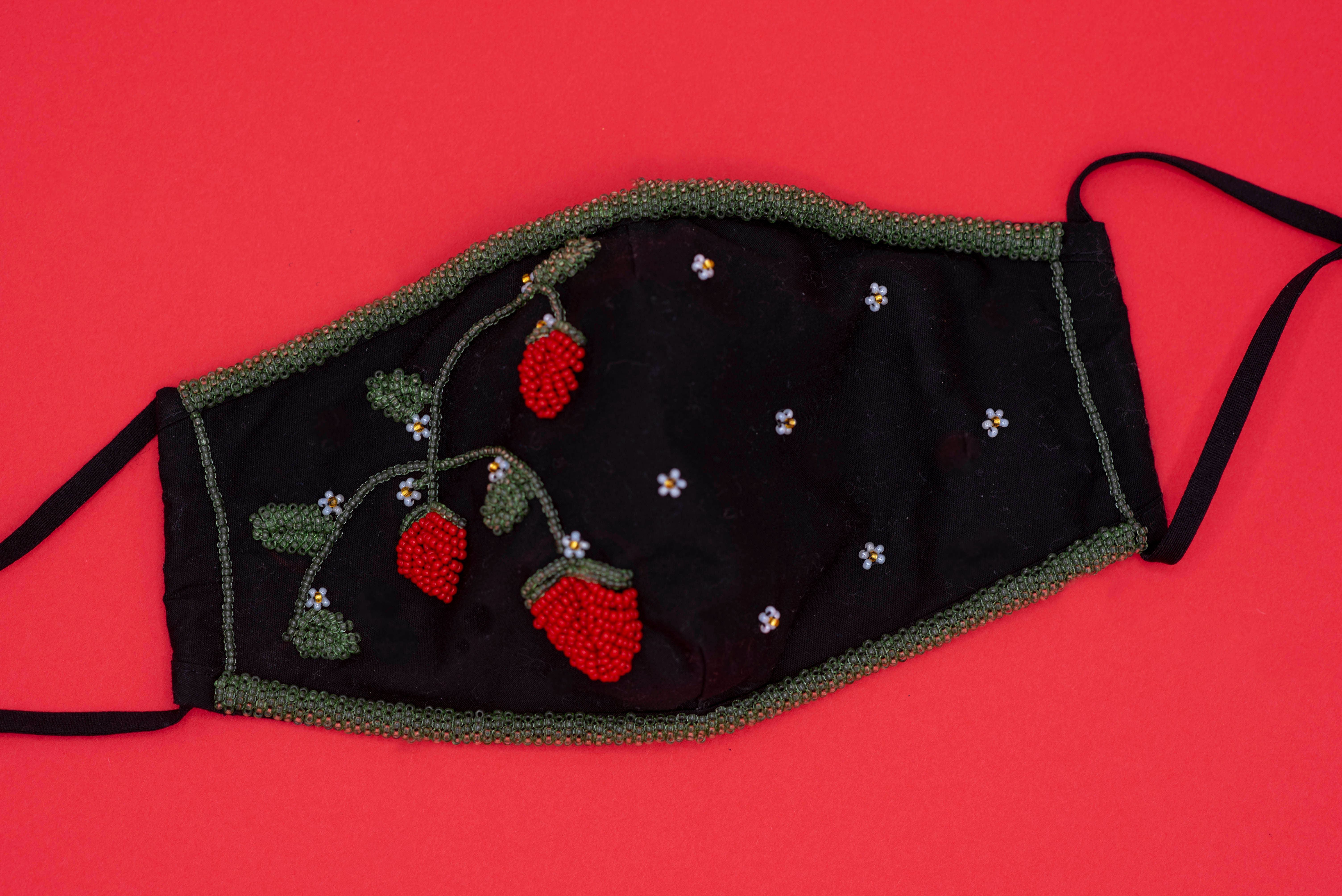 Erin is Wolf Clan Mohawk from Tyendinaga Mohawk Territory. She first learned how to bead when she was six. Three years ago, she started a small business selling her jewelry on Instagram.

“I chose strawberries because they are an important medicine in our culture, one of the first foods and the first berry that ripens in the spring and summer. These berries are used to strengthen our blood and cleanse our bodies, something we could all use during this pandemic. Even though COVID is horrible, this challenge gave an opportunity to showcase our art and make something beautiful out of it.” 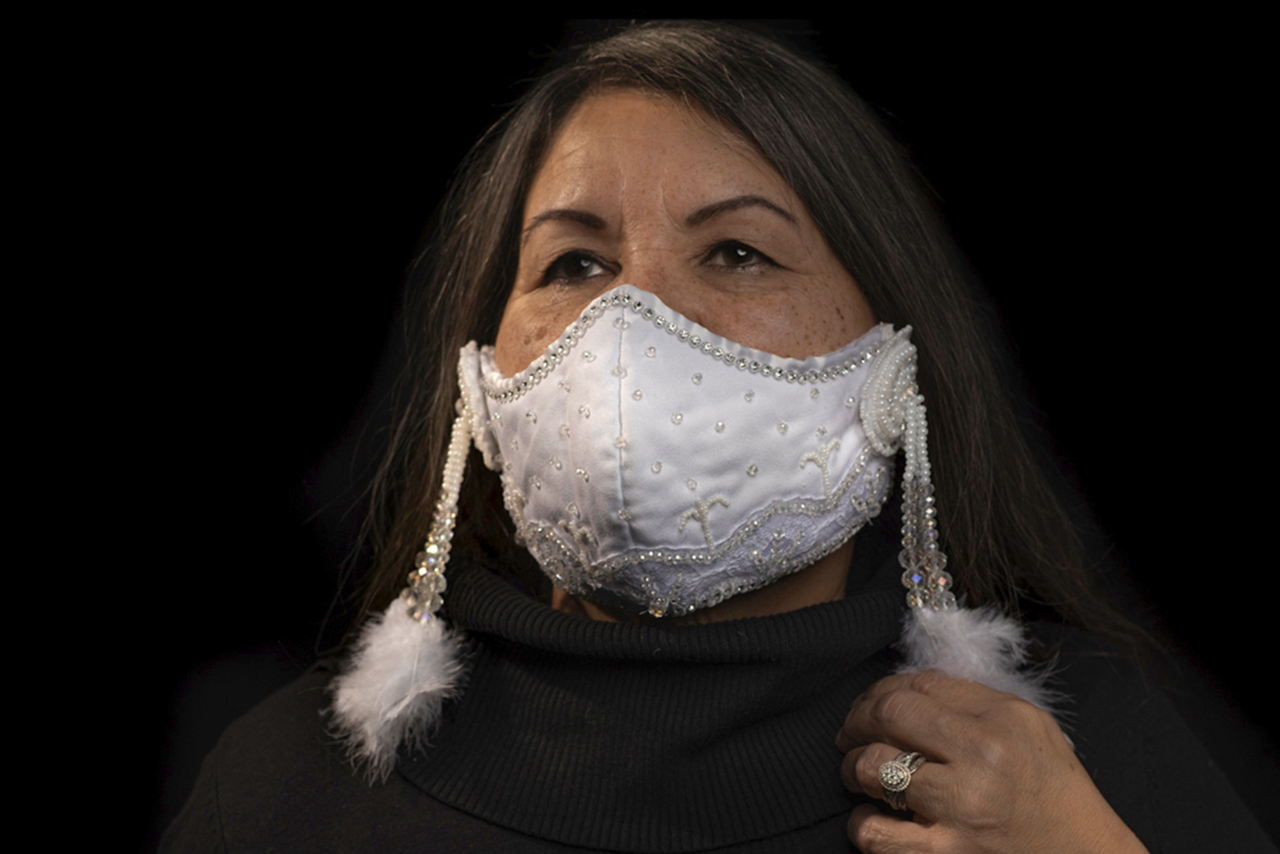 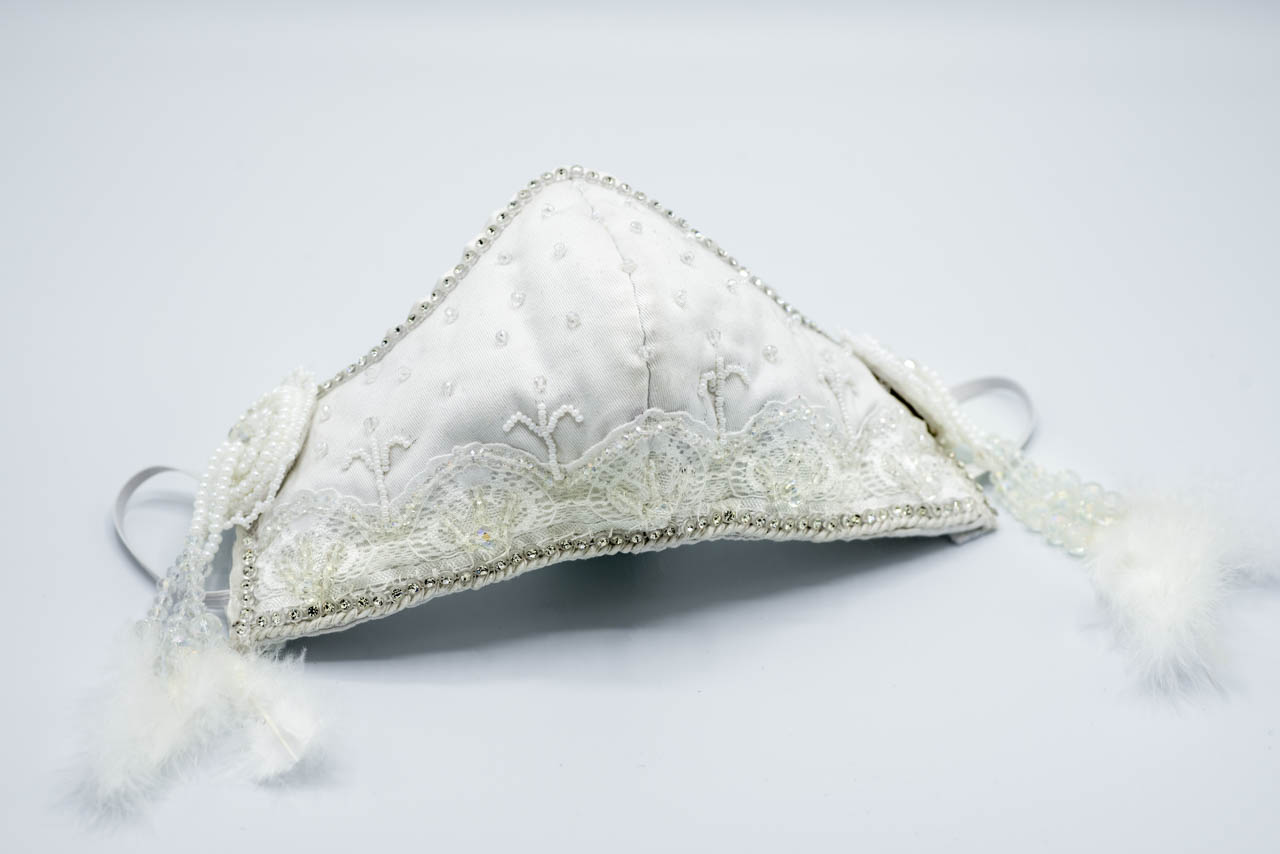 Carol Anne is Bear Clan Mohawk from Tyendinaga Mohawk Territory. She started beading as a child, surrounded by her mother and grandmother’s bead and leatherwork, and has now been beading for more than 50 years. She was set to be married in the fall of 2020 but, because of provincial restrictions, had to postpone the wedding. 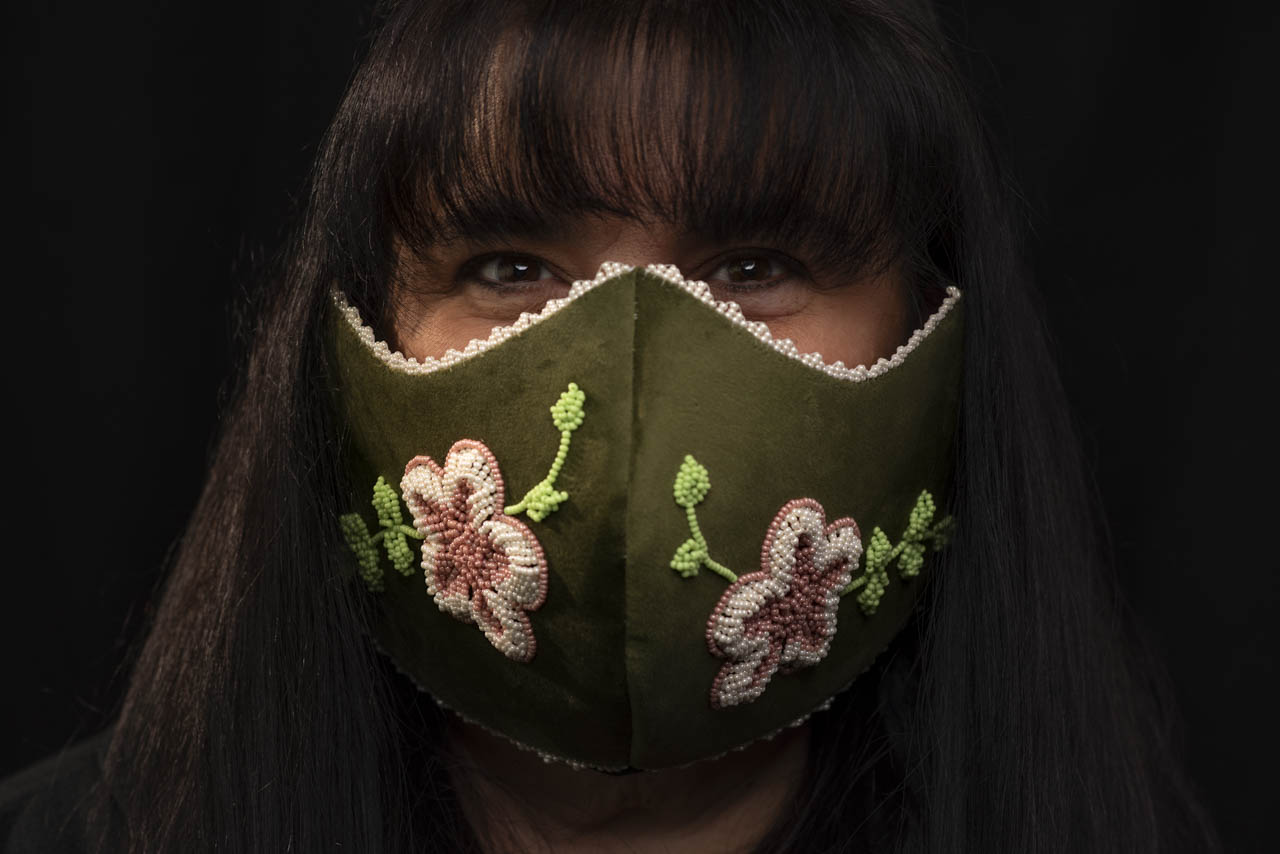 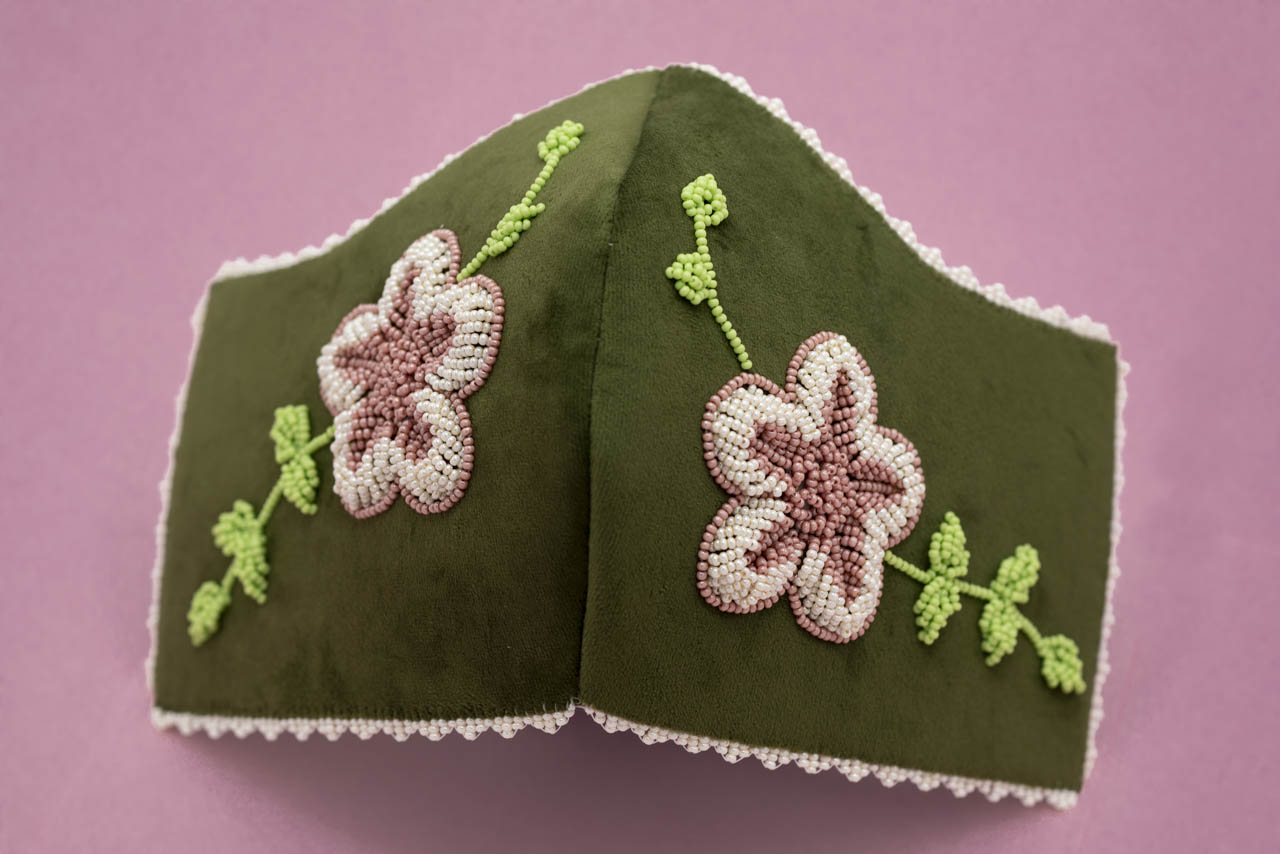 Amy is Mohawk from Tyendinaga Mohawk Territory.  She has been beading for many years but, after setting it aside for about a year, she saw this challenge as an opportunity to get back into it.

“I did a basic five-petal flower design, and, in the centre, I did raised beading, which I’ve only ever done once before. But I really liked the looks of it, because it’s something that’s purely Haudenosaunee style. A lot of nations do the flat beading but when you see raised beading, nine out of 10 times that’s a Haudenosaunee item.” 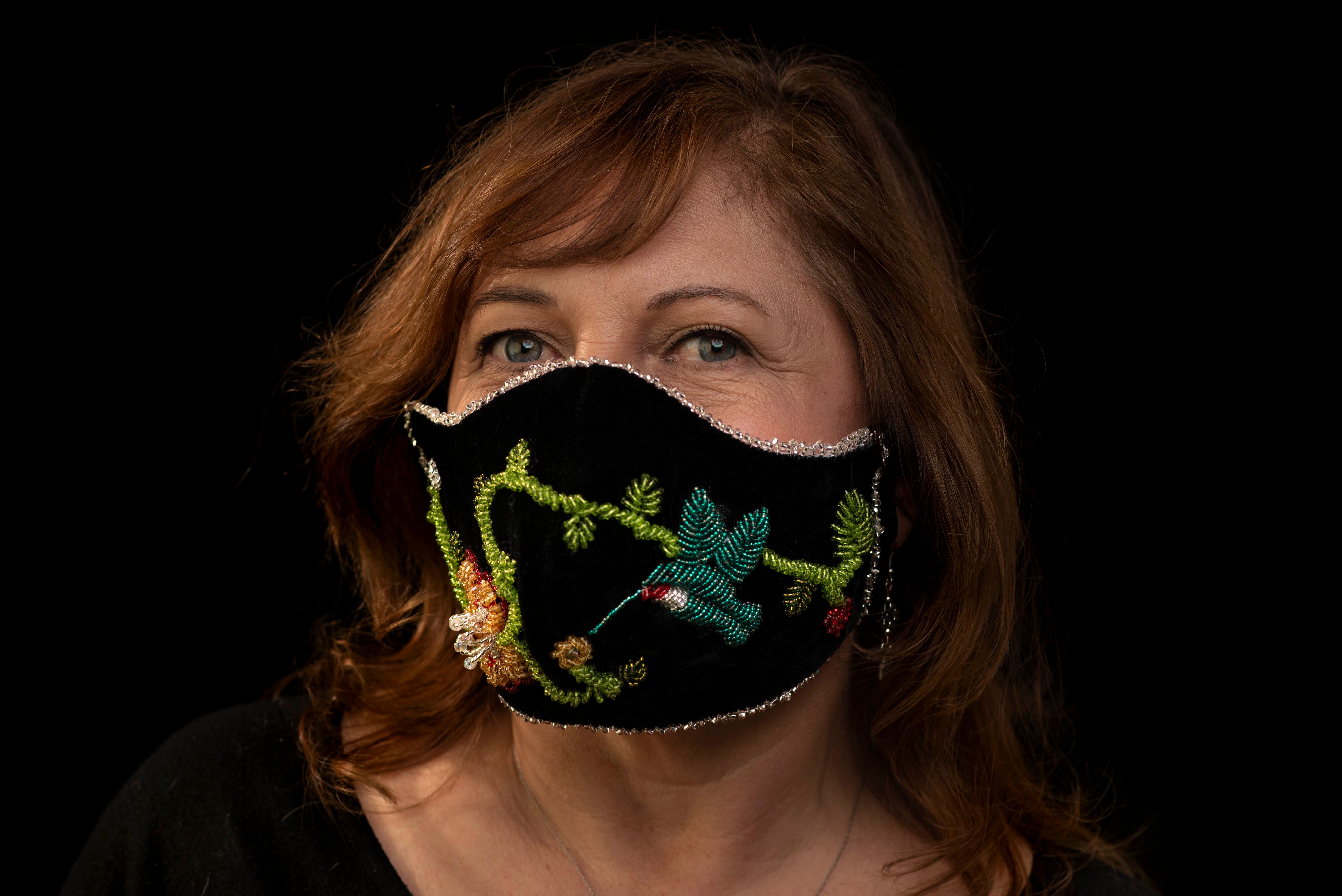 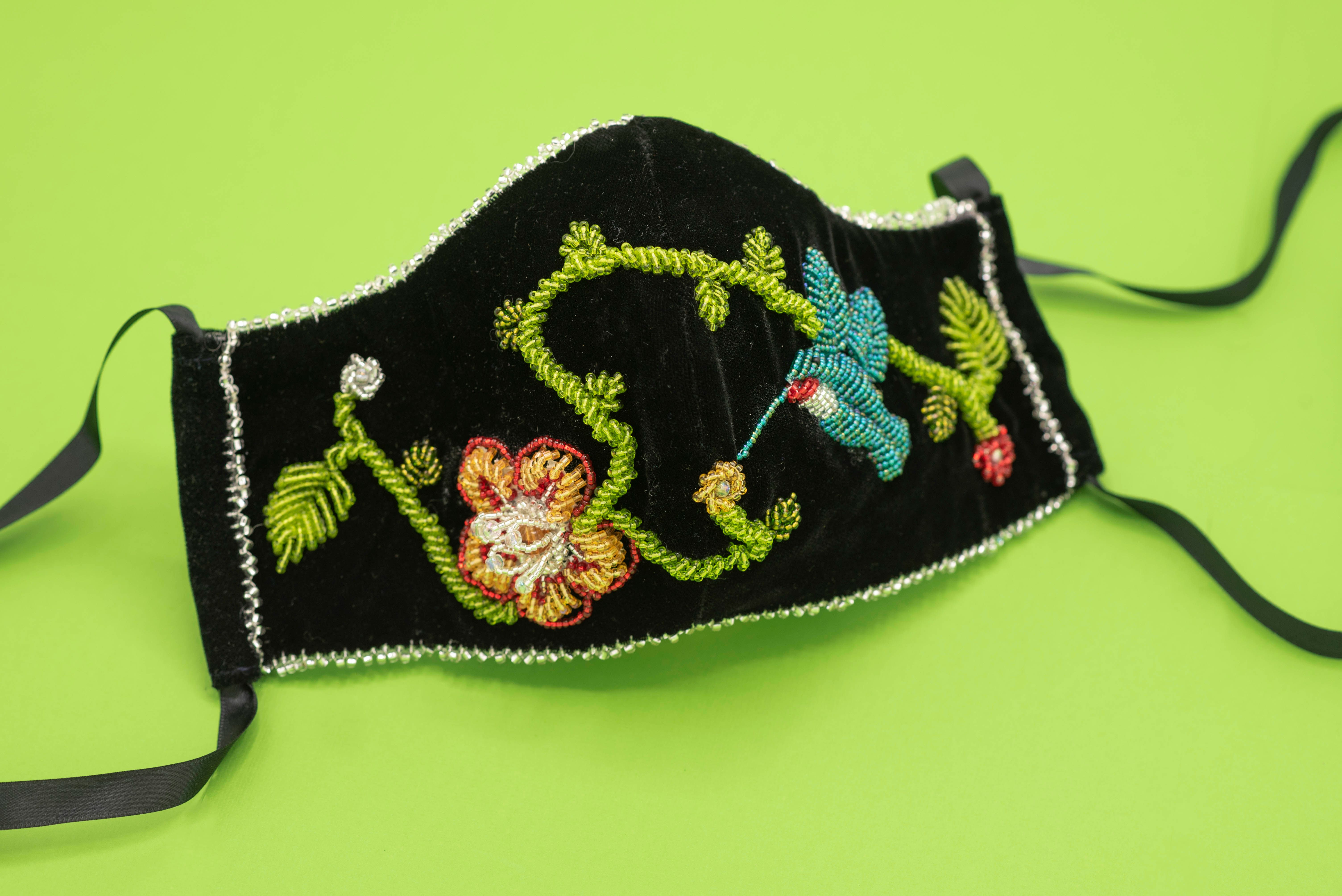 Callie is Turtle Clan Mohawk from Tyendinaga Mohawk Territory. She has been beading on and off for 40 years, dabbling in free-hand, loom work, and raised beading.

“My mask is based on traditional Rotinonhsyón:ni raised beadwork, which is the technique I am newest to but enjoy most. My late mother’s favourite bird was the hummingbird, and so this is a tribute to her. My paternal grandmother was a beader. I don’t know what techniques she favoured, but this piece is also in memory of her. I feel that I am carrying on a long-standing family tradition with my beading.” 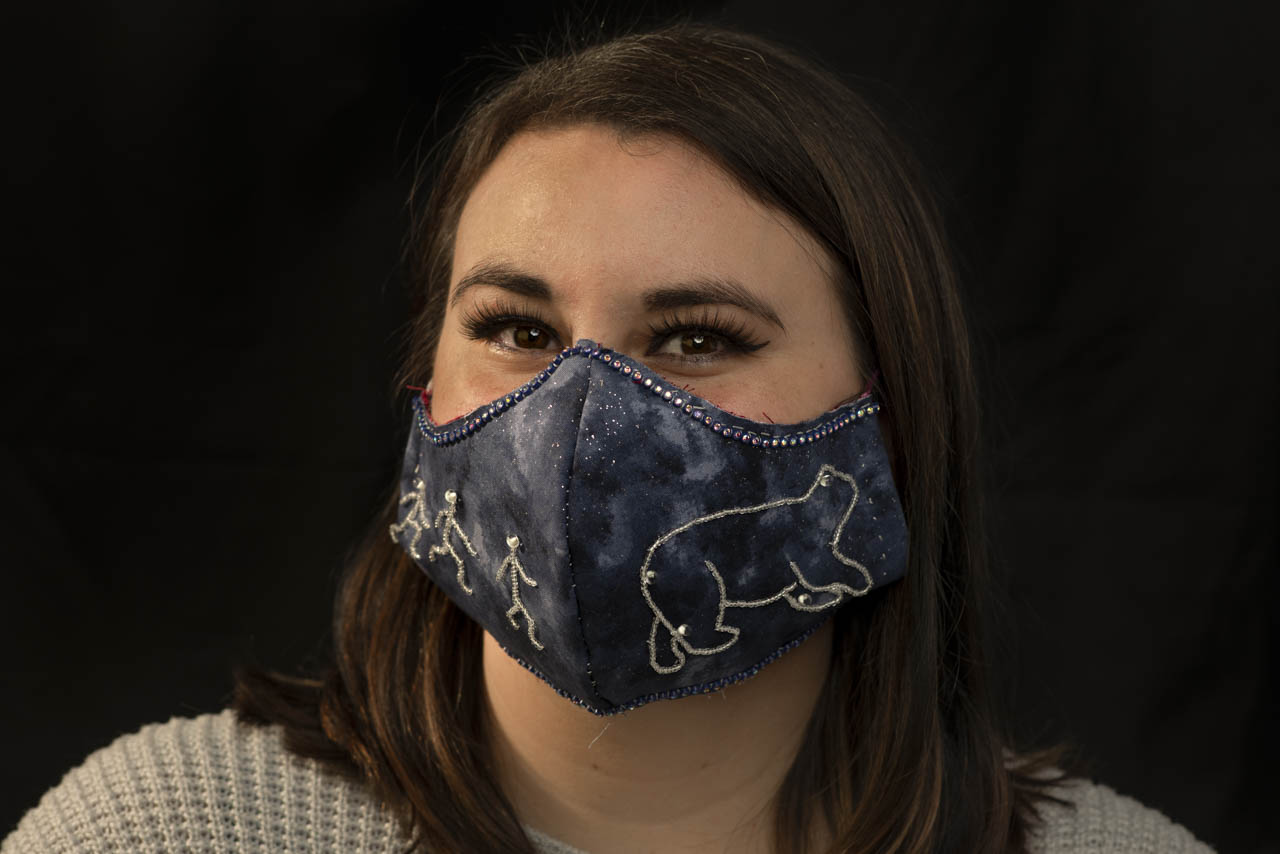 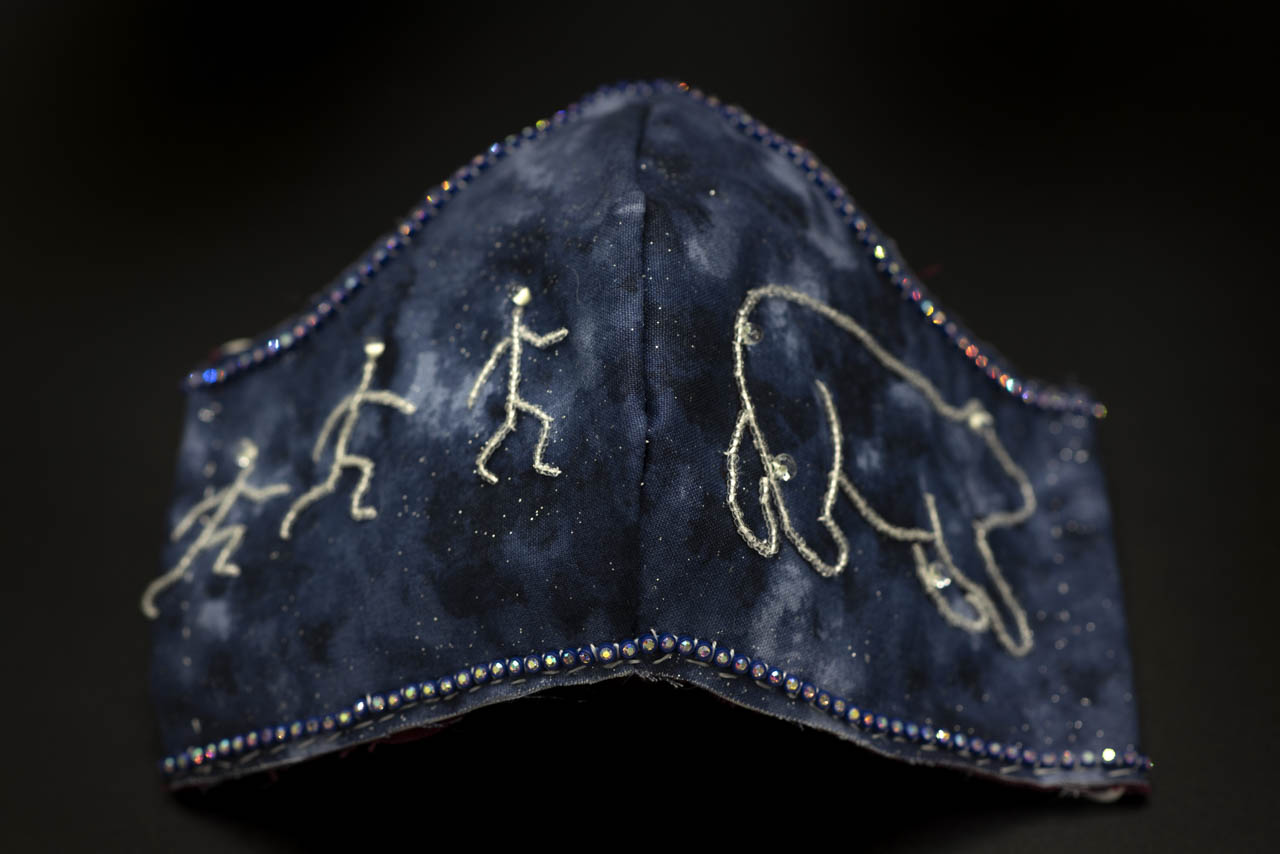 Catherine is Mohawk from Tyendinaga Mohawk Territory and lives in Belleville. Catherine took up beading in 2013 and, four years ago, started a business, Urban Natives, which sells her beadwork creations.

“I chose the story of the Big Dipper for my mask. It shows the three hunters and the bear [the hunters are represented by the stars of the handle of the Big Dipper, and the bear by the stars of the cup]. There are many versions of the tale, but to sum it up, when the three hunters catch and kill the bear, his blood falls from the sky to change the colour of the leaves in the fall. In the winter, the bear is dead and appears in the sky upside down. Then, in the spring and summer, the bear lives again and appears right side up. The beaded constellation also glows in the dark.” 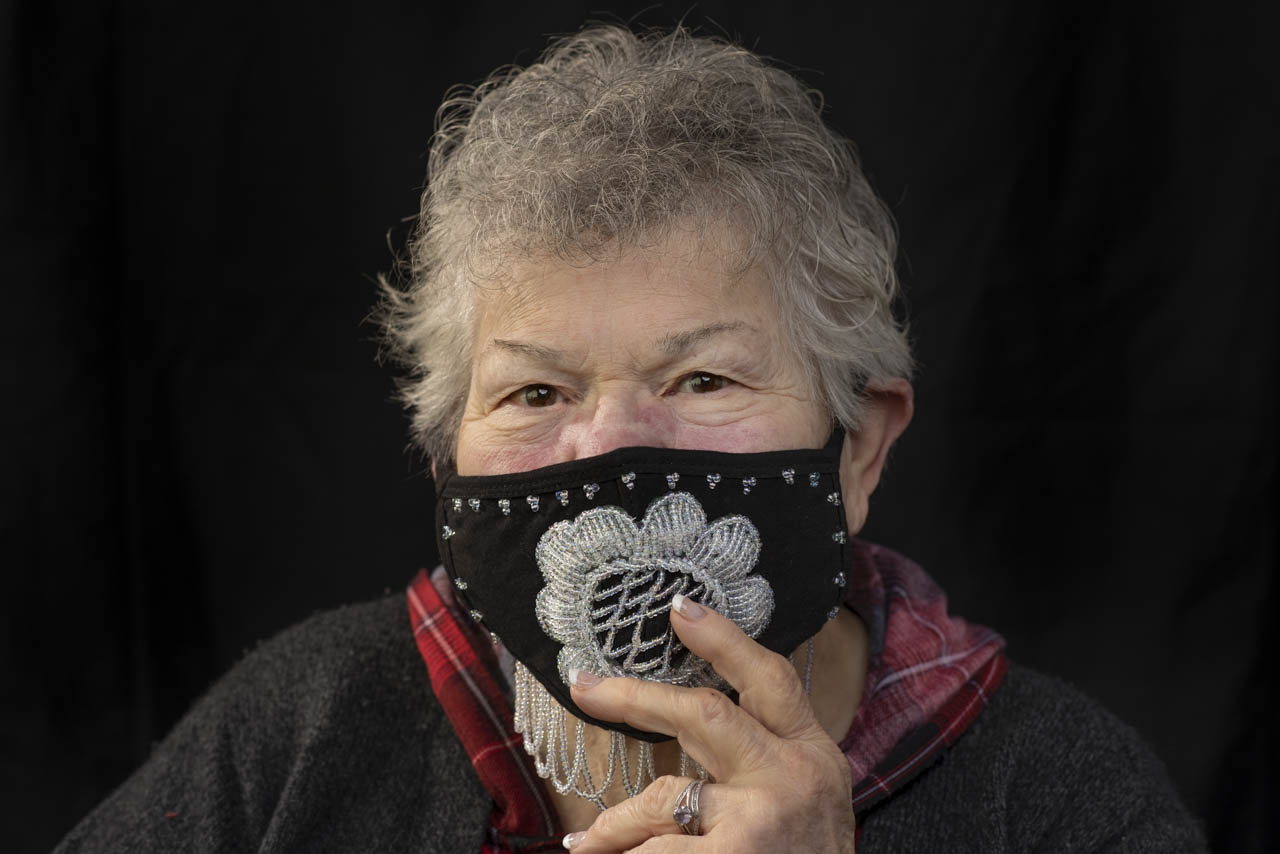 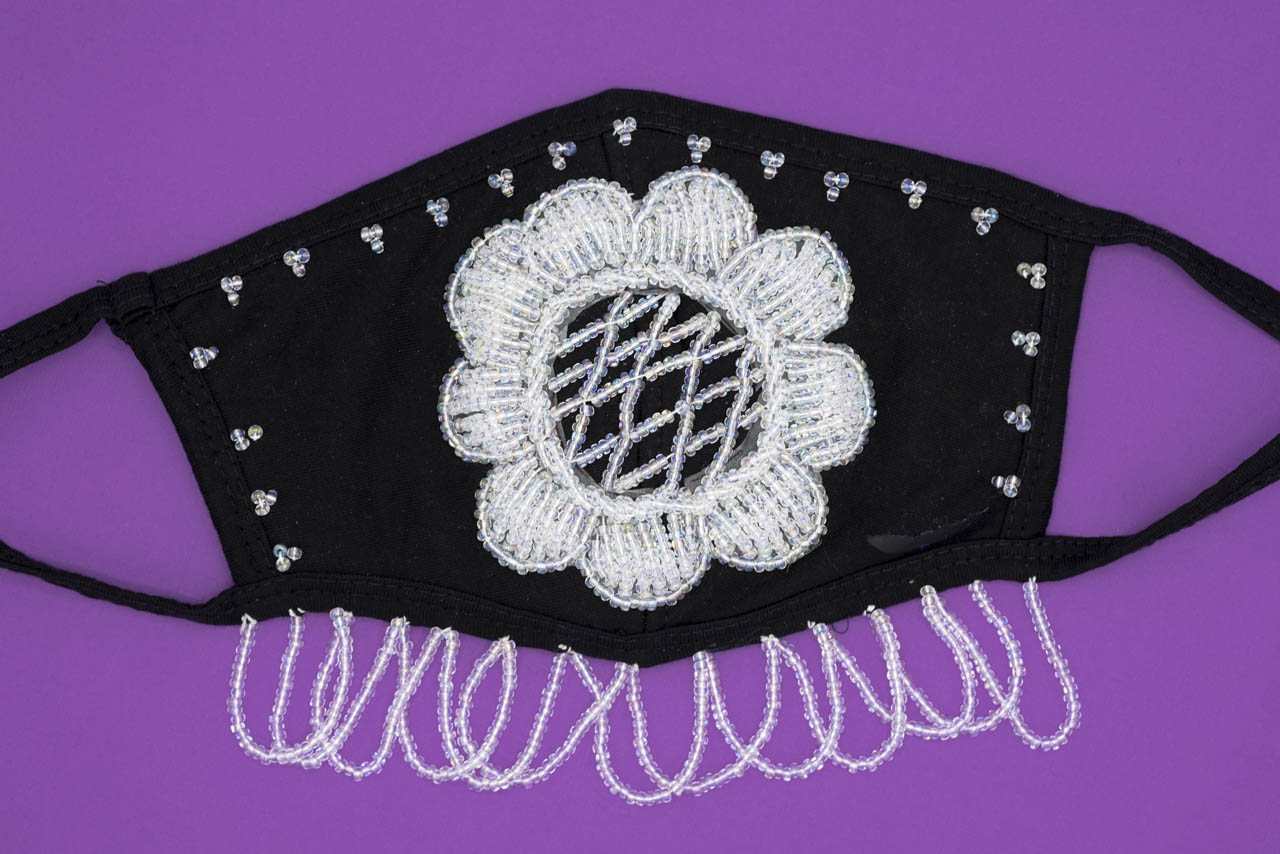 Joy is Wolf Clan Mohawk from Tyendinaga Mohawk Territory. She has been beading for more than 10 years and is part of a beading group in Tyendinaga.

“I grew up in Buffalo, and I’d have summers here with [my grandmother]. She taught me to cook, sew, bake, knit, and crochet but never taught me to bead. Then I came across this little sewing box in the attic that was hers with some beads in it, and it warms my heart to have these beads that she used. For the challenge, they wanted us to stay with our culture, so we had to really do something that reflects Mohawk beading, so that’s where the raised beading comes in and these little doodads [points to beaded loops hanging from mask]. I love the look of it.” 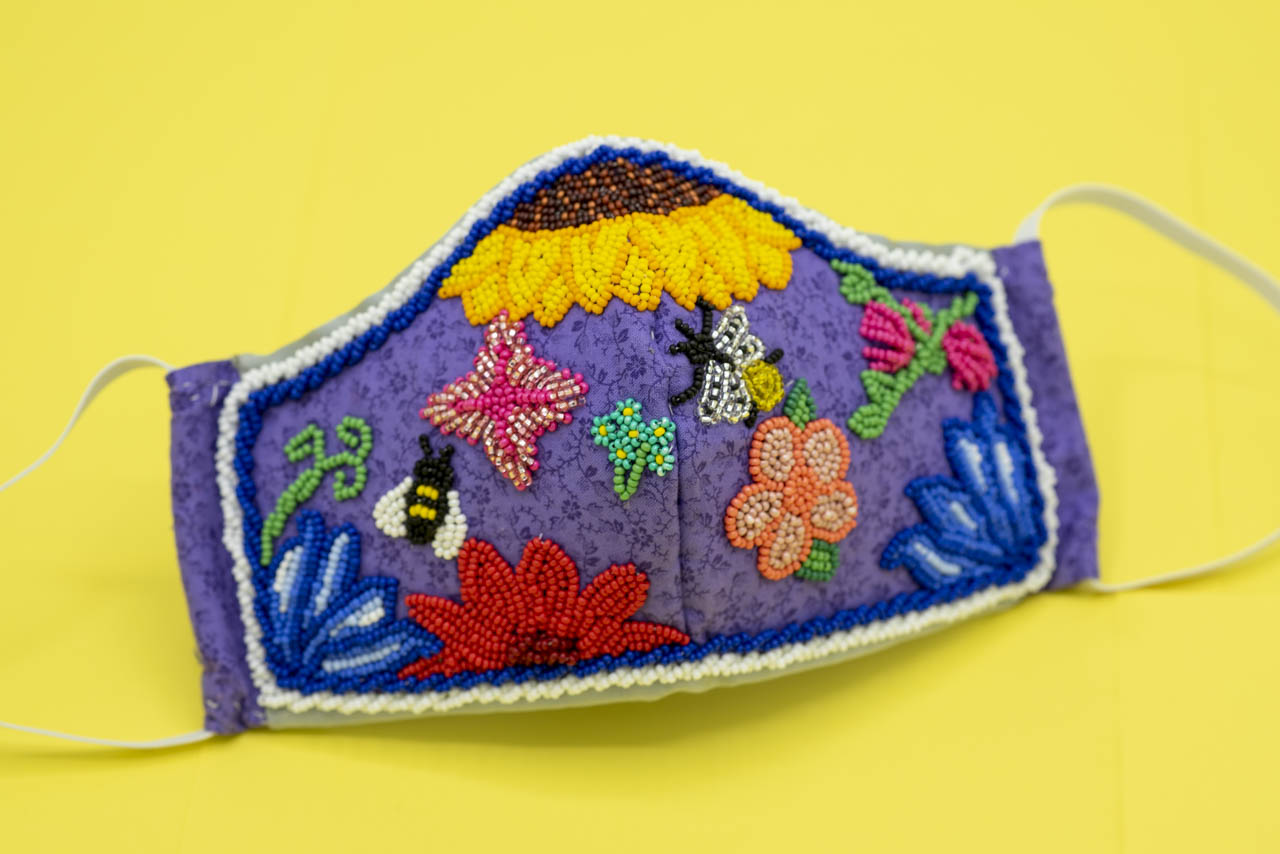 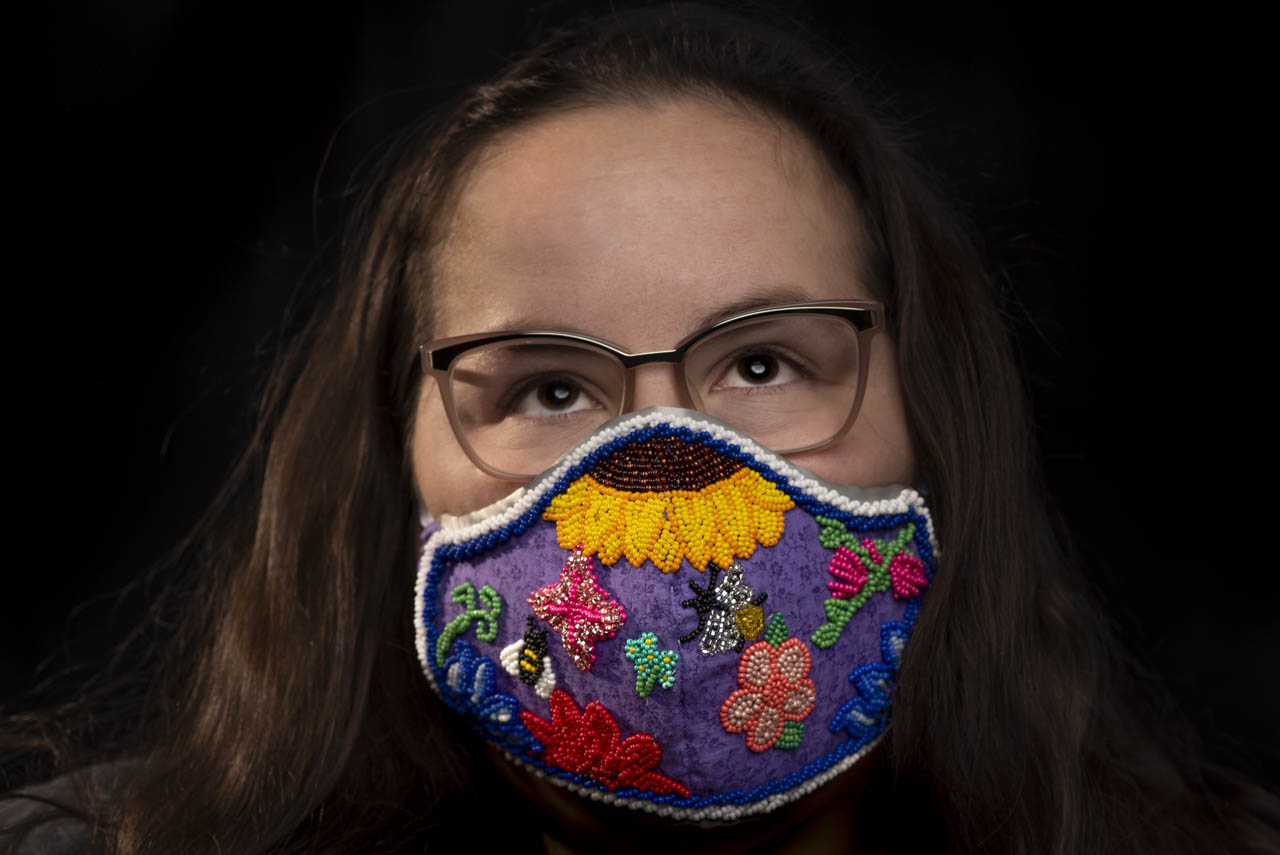 Melanie is Wolf Clan Mohawk from Tyendinaga Mohawk Territory. She has been beading on and off since she was eight, when her cousin taught her how to make a daisy chain.

“I continuously find myself drawn to flowers. I want them around me all of the time. Luckily, flower beadwork is common for Haudenosaunee and other Indigenous artists, so I took my inspiration and ran with it. I included two bugs — the bumblebee and the firefly. As a gardener and flower lover, I have gratitude for the bugs that help make the beauty happen.” 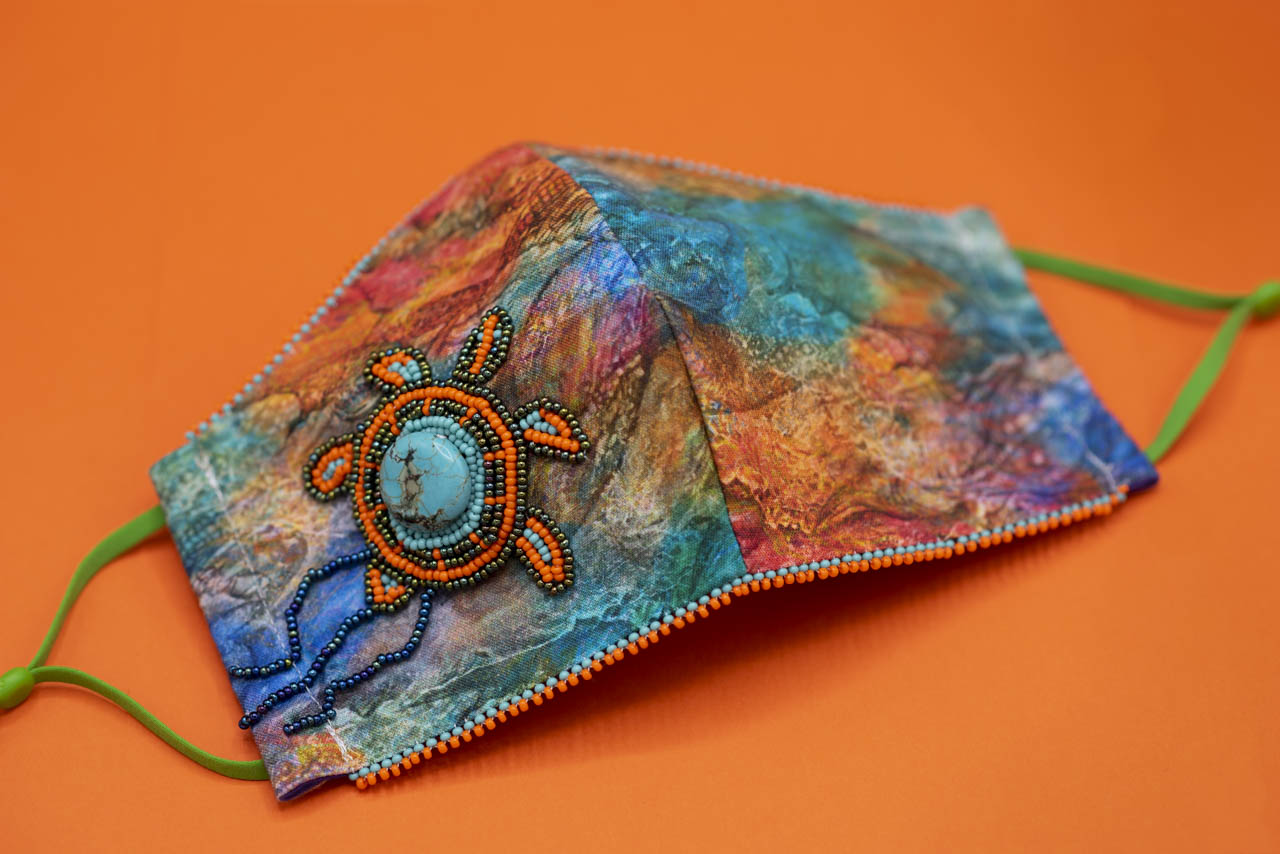 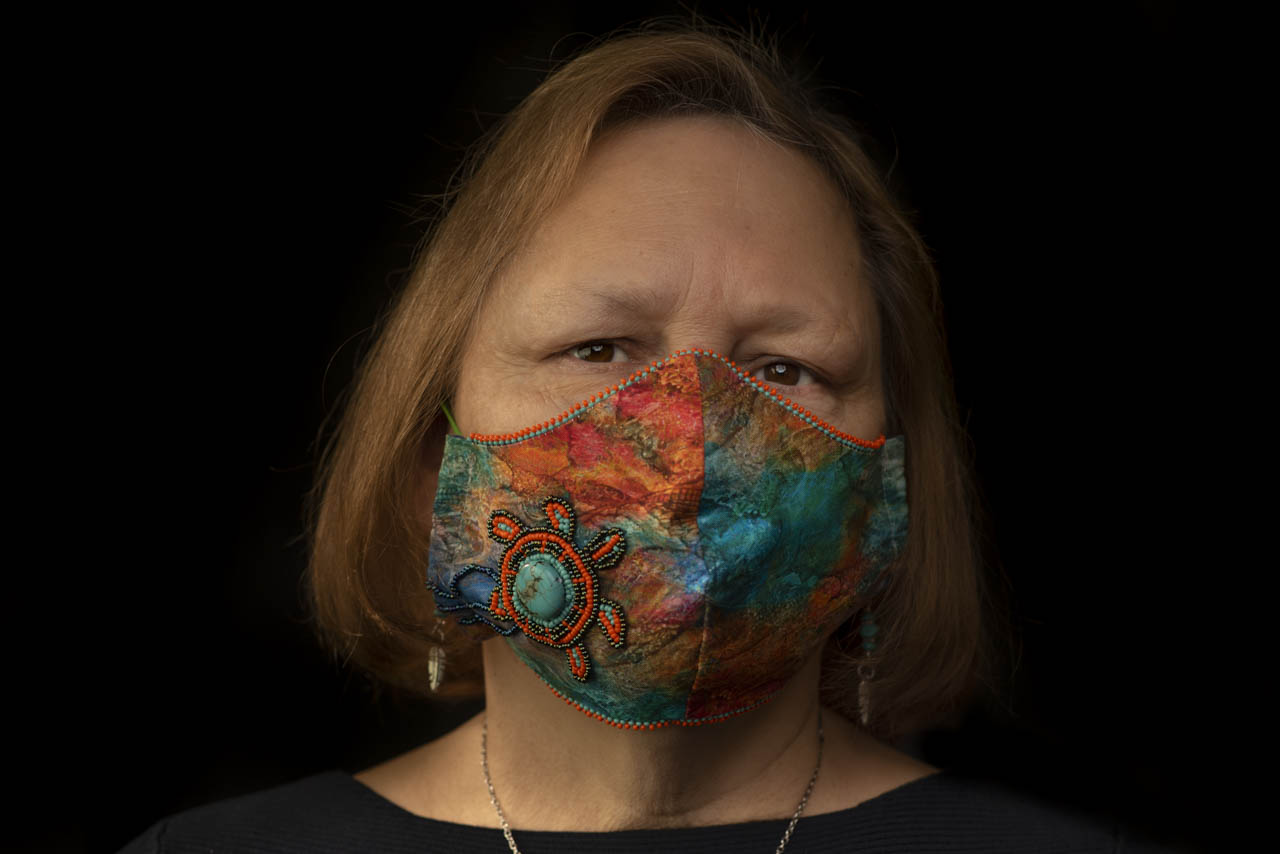 Cindy is Turtle Clan Mohawk from Tyendinaga Mohawk Territory and lives in Belleville. She has been beading for about four years.

“I didn’t know much about being Turtle Clan growing up. I did see beadwork of turtles on many handmade items, such as purses, traditional regalia, etc., made by my aunt Laura. When I was a teenager, I finally asked my grandmother the significance of the turtles. She said, ‘It’s our clan’ … nothing more was said. Being Turtle Clan provides a connection to my ancestors for me.” 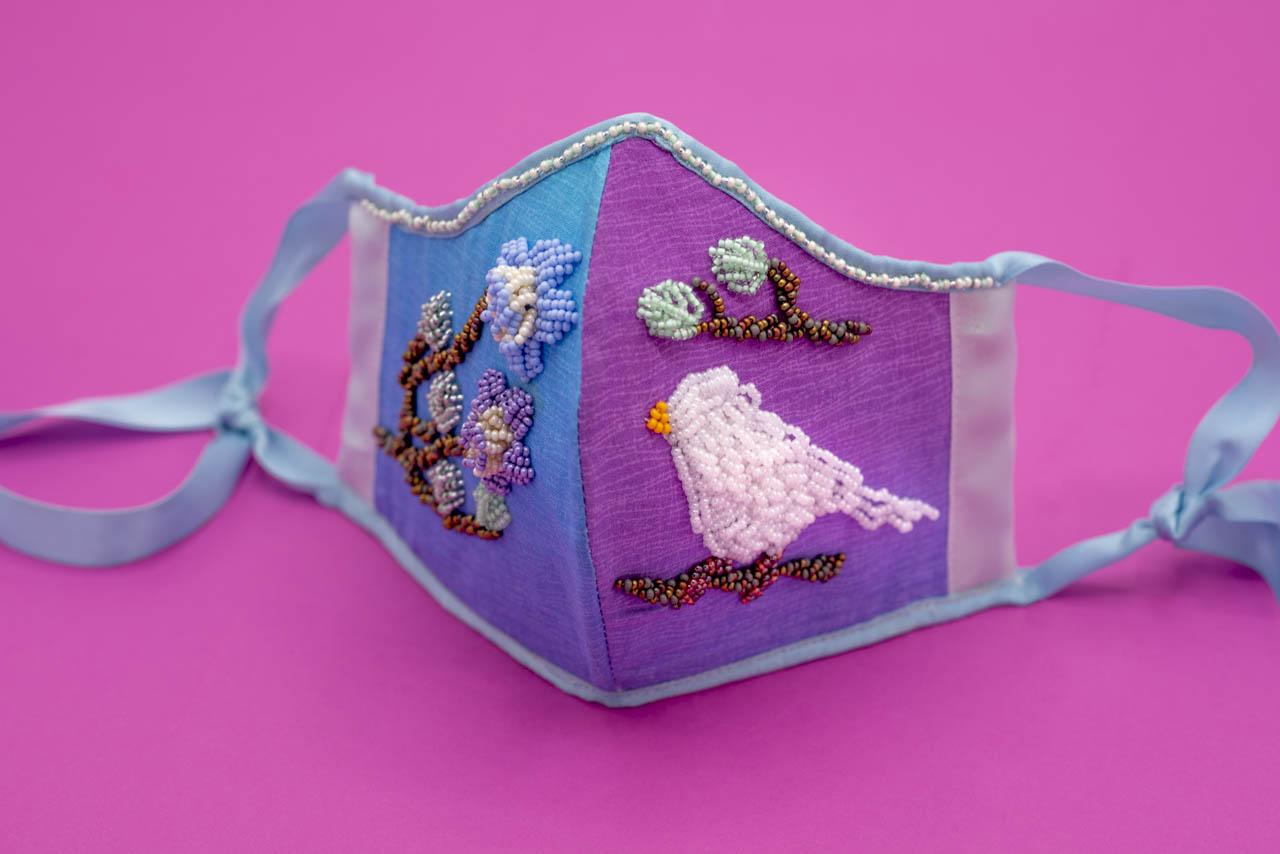 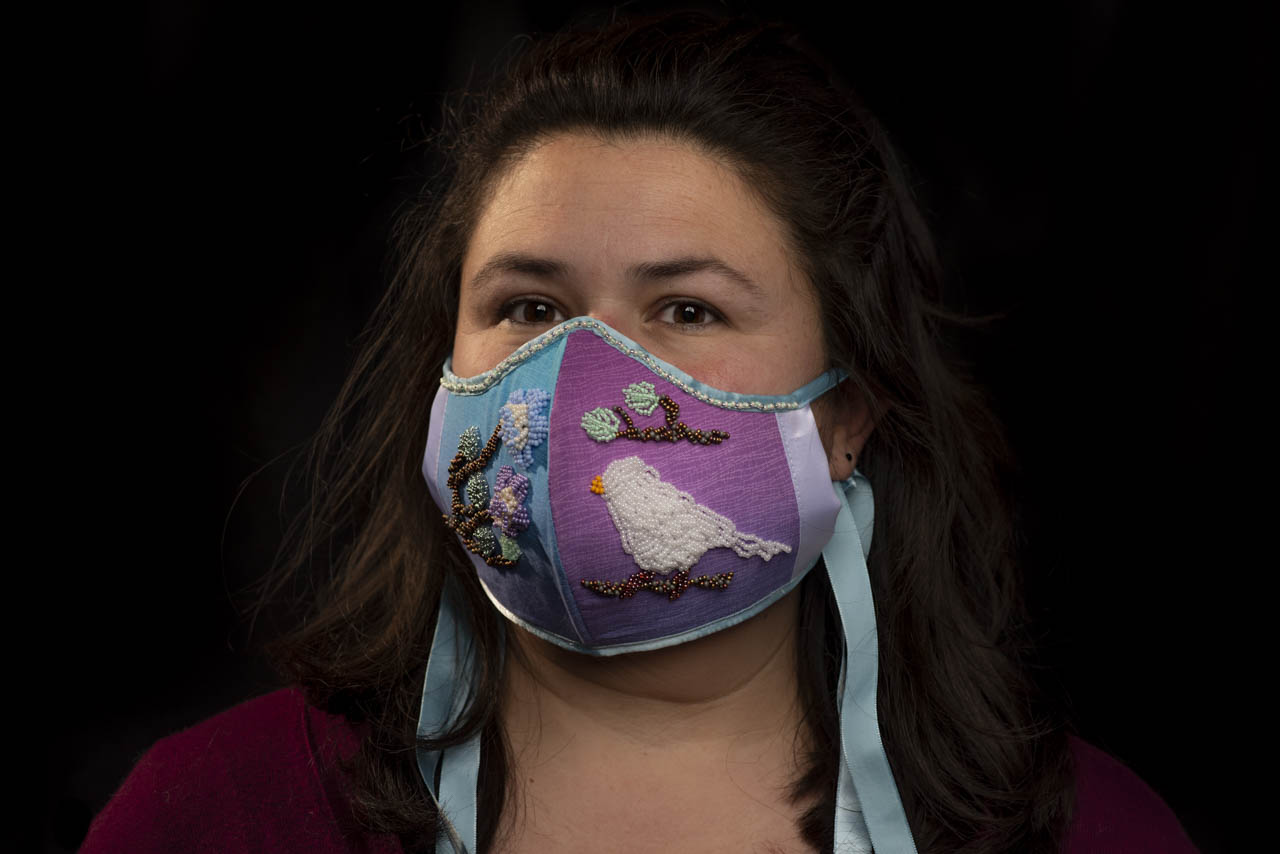 Tina is Mohawk from Tyendinaga Mohawk Territory. She started beading about three years ago when she joined a weekly beading group in the community.

“I really enjoy looking at heirloom and antique beadwork. I am in awe of their artistry and abilities, especially when you think of the materials they had to work with at the time. I felt a particular connection to one piece I had the opportunity to view in a collection here on the territory, which was a bird beaded onto a small bag. The idea really stuck with me, and this was the result.” 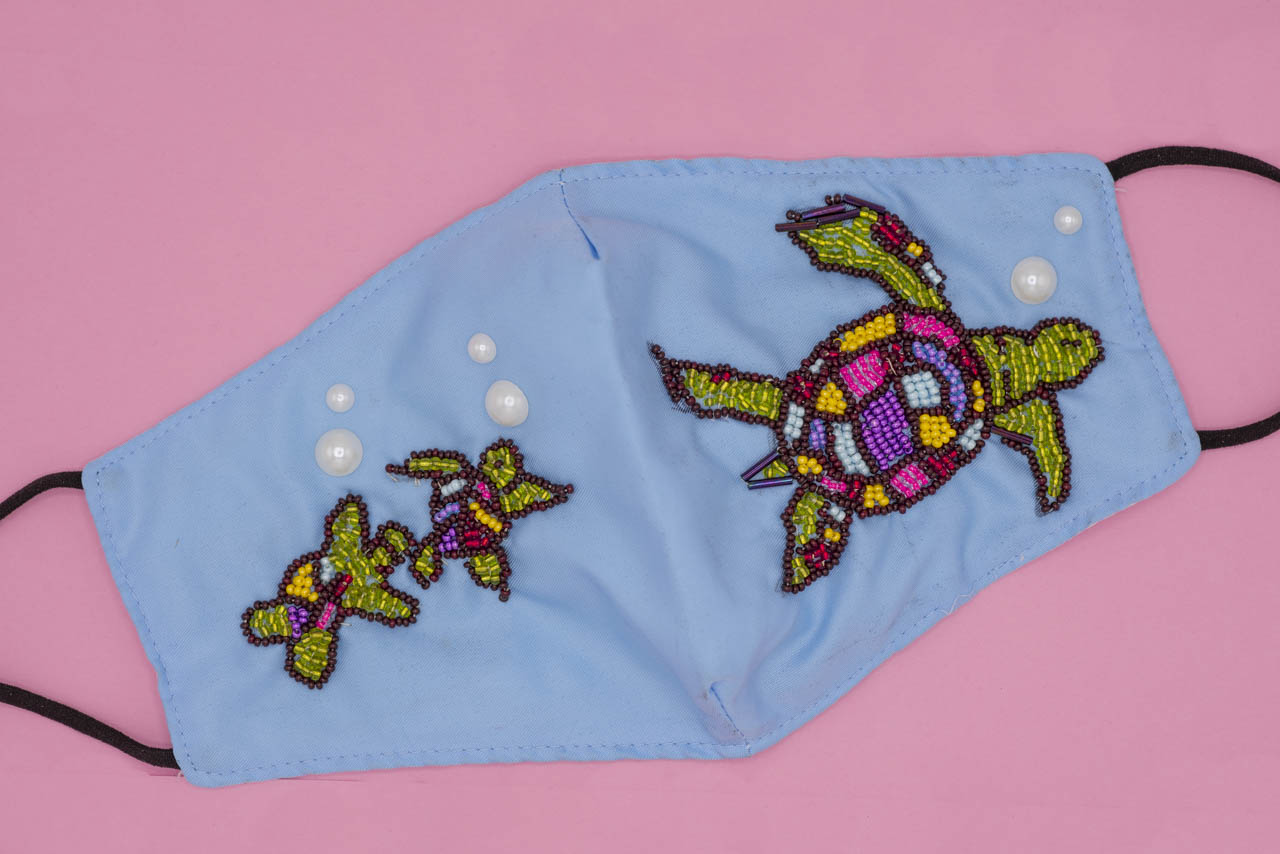 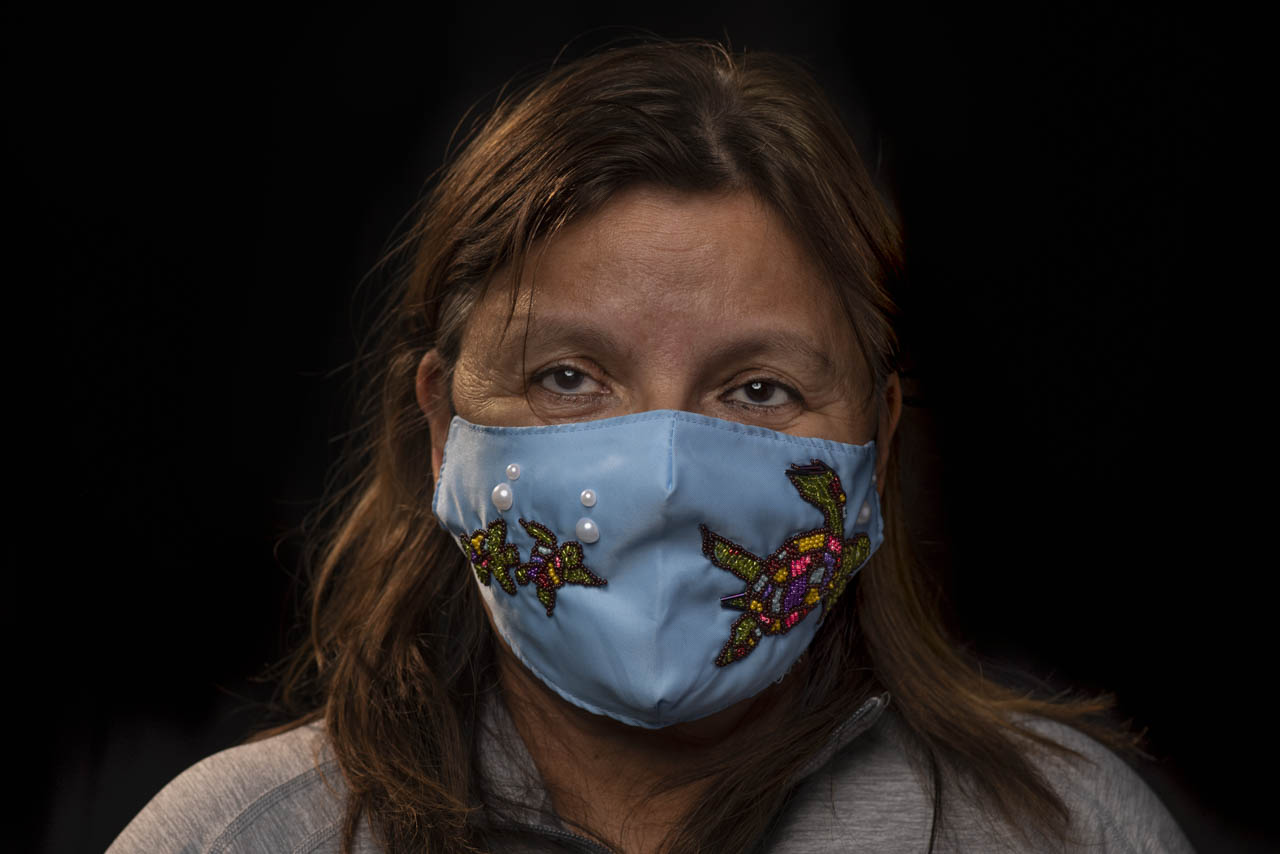 Daphne is Turtle Clan Mohawk from Tyendinaga Mohawk Territory and lives in Deseronto. She has been beading for 10 years.

“What I decided to bead on my mask was three turtles. I have a big turtle at the front of the mask on the one side; that turtle is me, and I have two little babies following behind, which are my children.” 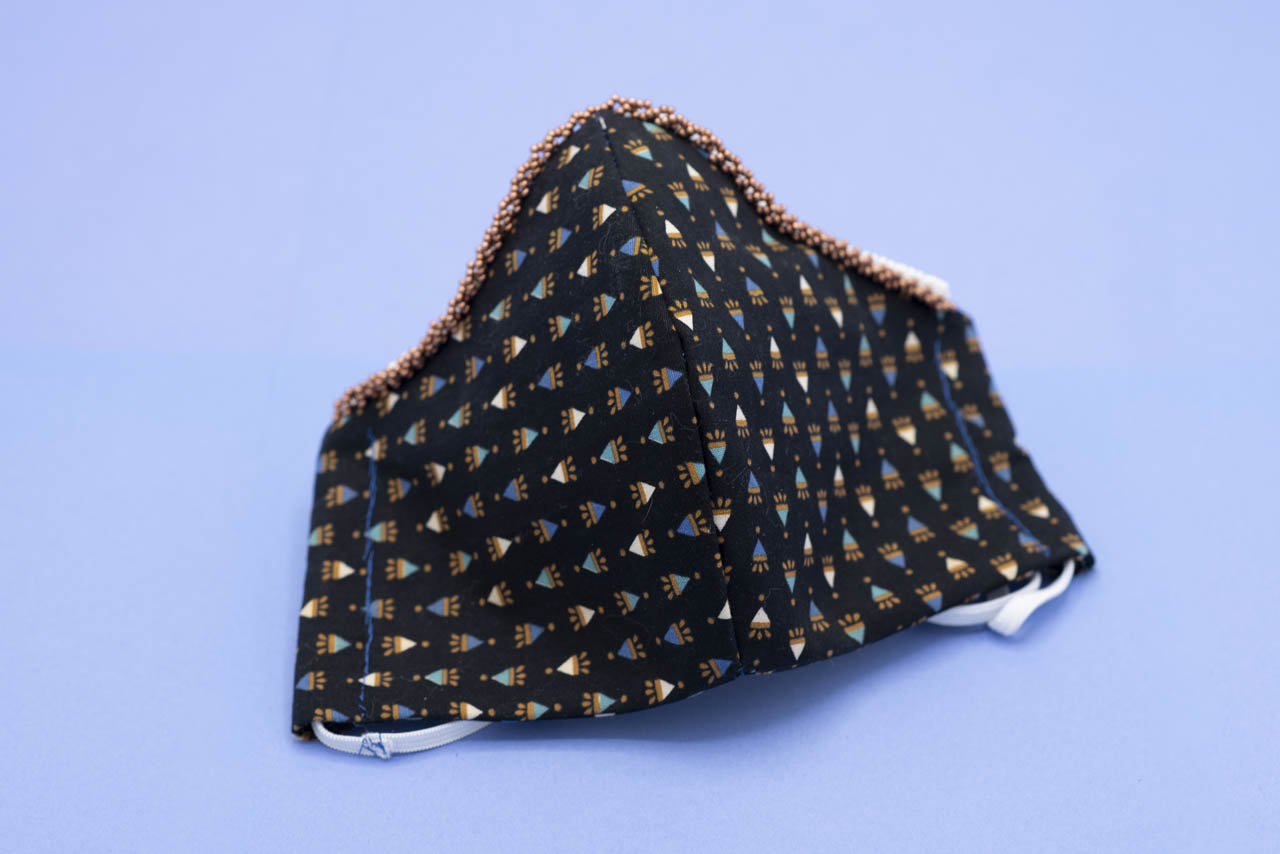 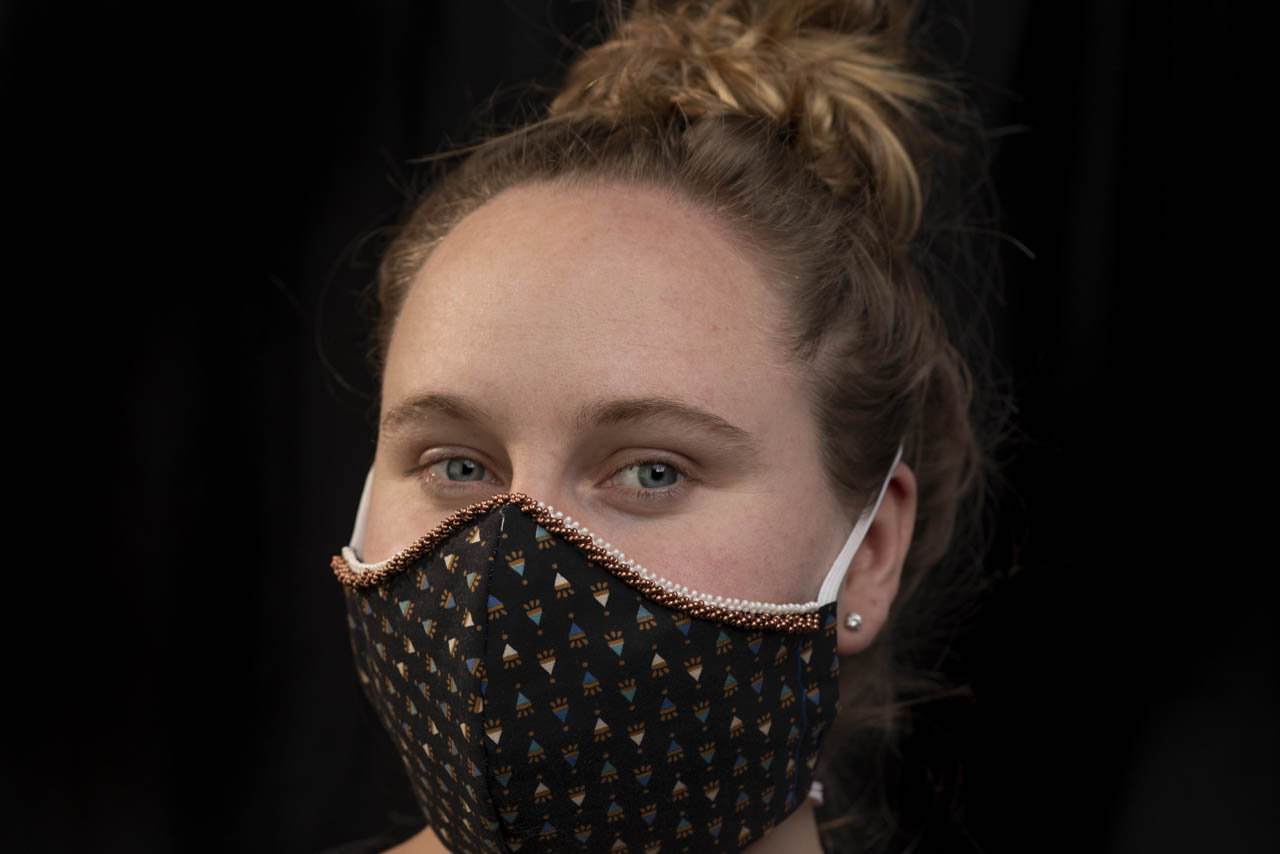 Brittany is Mohawk from Tyendinaga Mohawk Territory and lives just outside Belleville. She started dabbling in beading five years ago.

“I tried raised beading for the first time. The inspiration for the raised beading was to include some Haudenosaunee-style beading on the mask. I kept it minimal because I chose a patterned fabric. It was challenging to get the raised beading right. However, it was very exciting and fulfilling to learn the style of beading that our people were known for.” 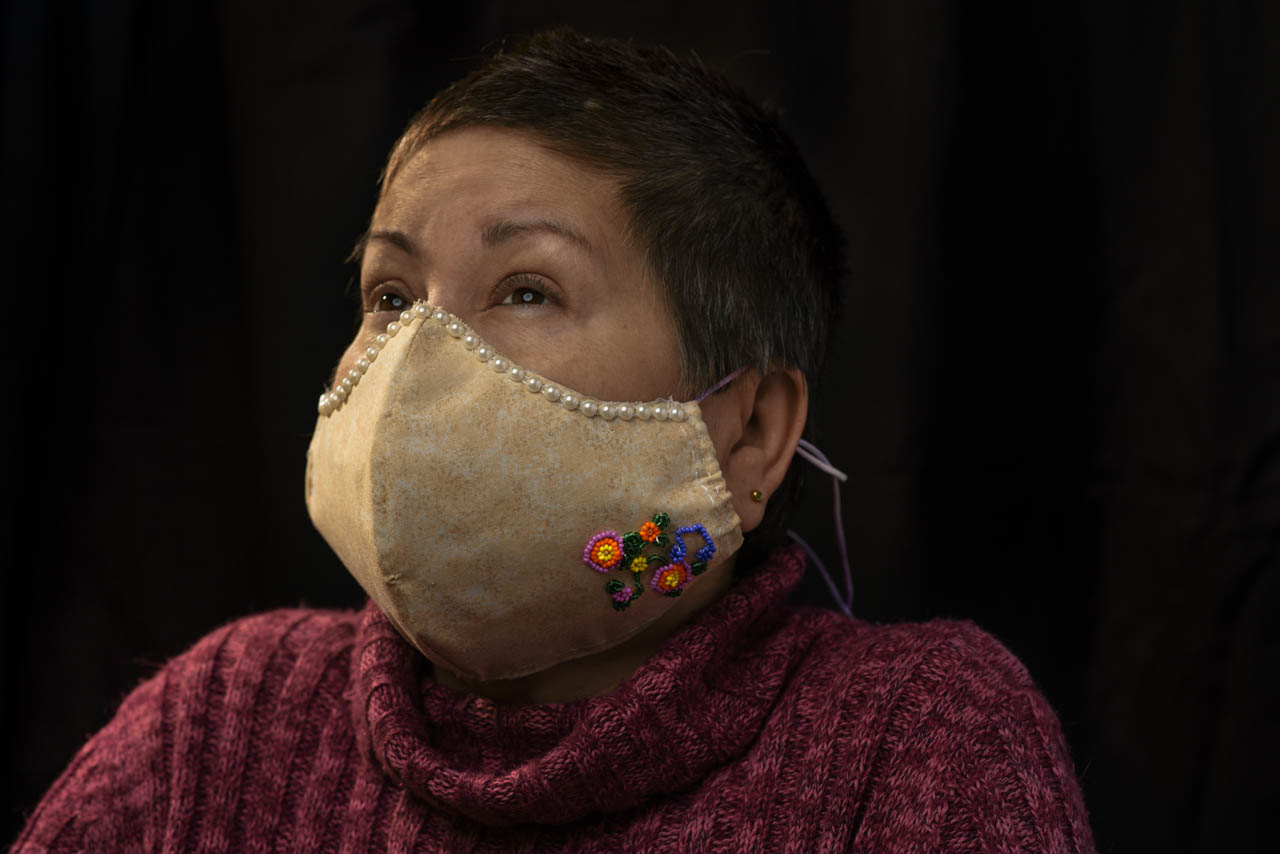 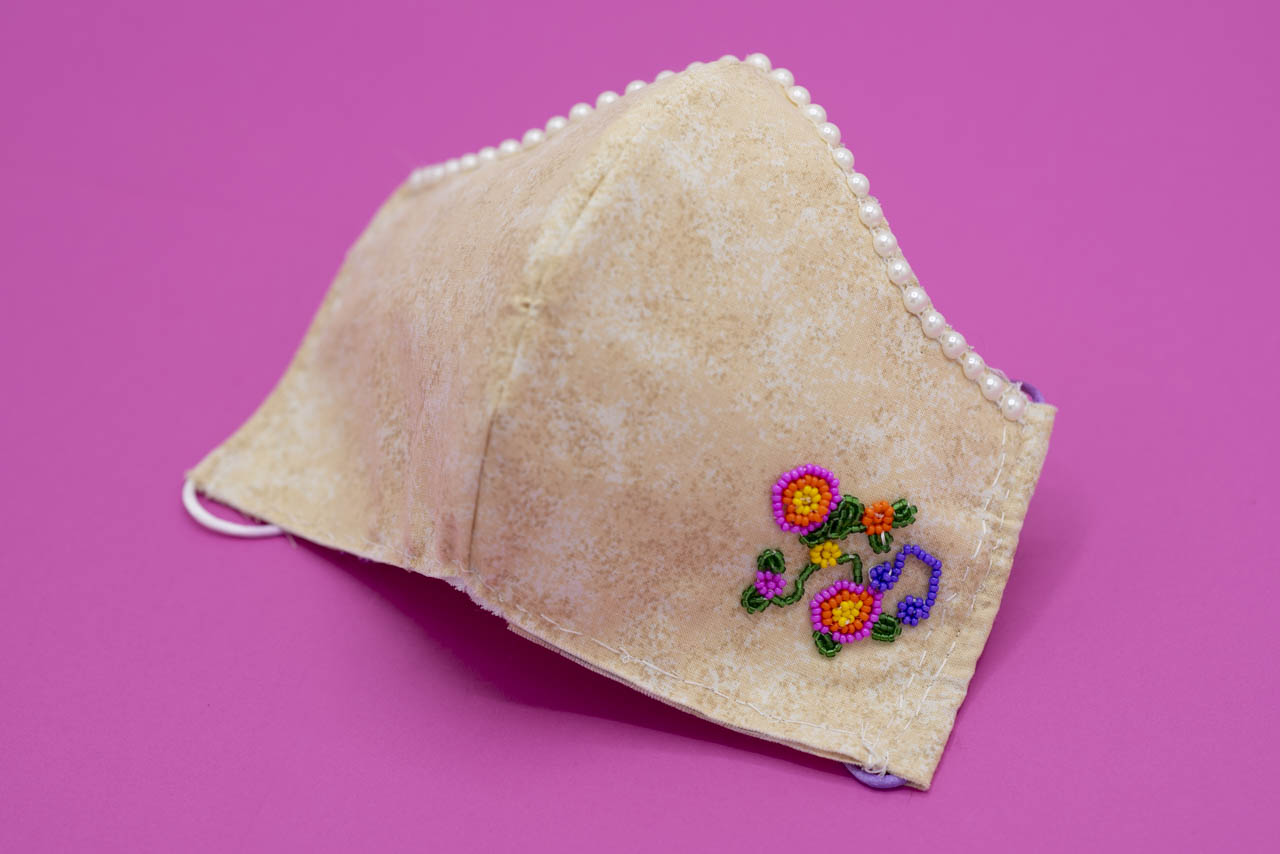 Tammy is Mohawk from Tyendinaga Mohawk Territory and currently lives in the city of Belleville. She rediscovered beading four years ago as one way to connect with her Mohawk culture.

“My inspiration for this mask is my father, Robert Maracle. They called him Fiddler Bob. He was a musician, and so I added some musical notes in the beading as well. We lost him to COVID this year, in April.

He had been in hospital, and when they were returning him to Hastings Manor [a long-term-care home in Belleville], they said that we couldn’t even see him to transition him back into his room, because they had it locked down, so I never got to say goodbye.” 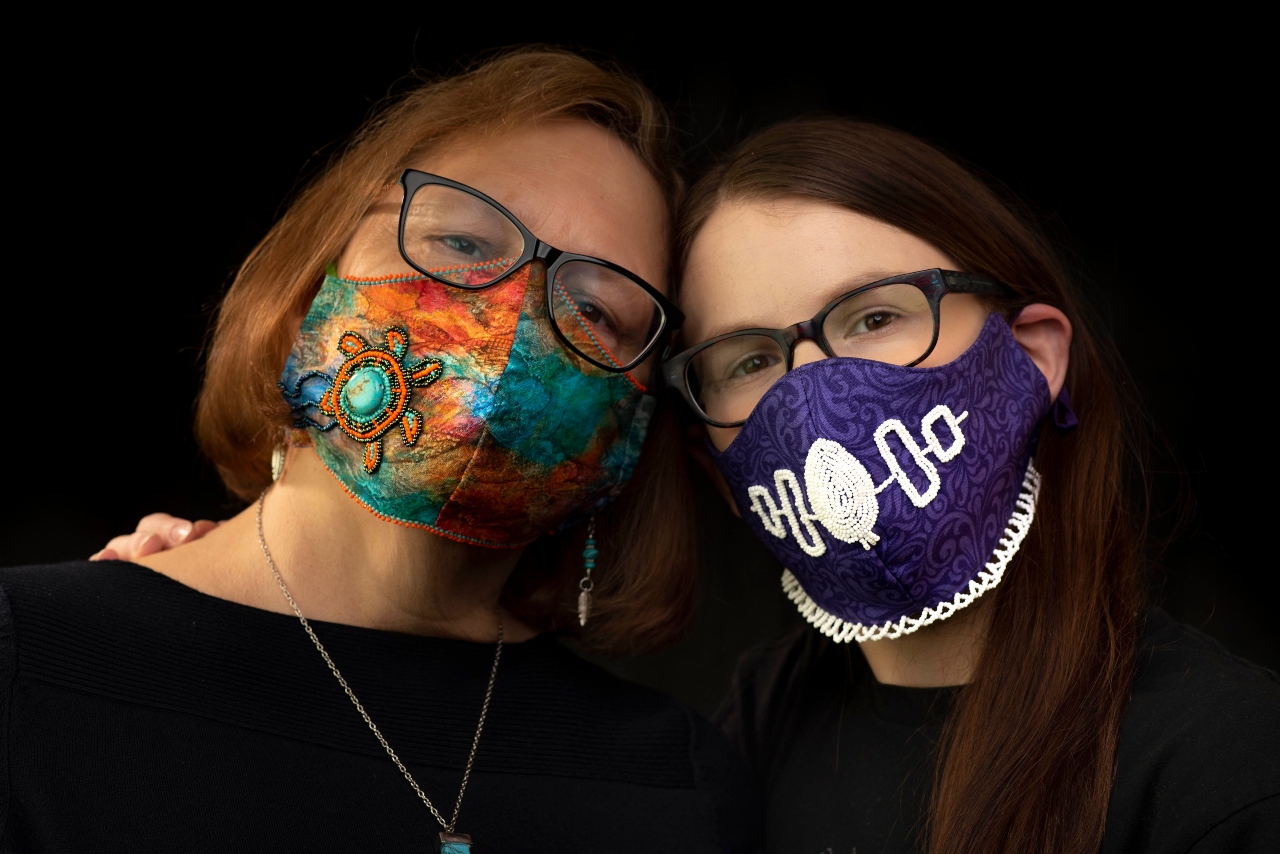 Shelby Lisk, reporter for TVO.org's Indigenous Hub, travelled to her home community to photograph these artists. Here she is with her mother, Cindy Lisk, on location in Tyendinaga Mohawk Territory. Both women are wearing masks beaded by Cindy.