Why Windsor may be a hotbed of Canadian populism

New research suggests the attitudes that made Brexit and Donald Trump happen are present in Ontario’s traditional manufacturing cities — especially Windsor
By Adam McDowell - Published on Feb 01, 2018
Windsor is the only major urban area in Canada where there are more ordered-minded residents than open-minded ones. (iStock.com/RIverNorthPhotography

​Anyone who failed to heed the rise of protectionism and nativism in the United Kingdom got a rude surprise when, in 2016, the country voted to leave the European Union. The election of Donald Trump just a few months later made it impossible to ignore that many Americans harboured inward-turning sentiments too.

A major new survey suggests that plenty of Canadians might’ve voted along the same lines, and that the traditional manufacturing cities of southern Ontario are especially fertile ground for 21st-century populism — perhaps Windsor most of all.

“The same forces are at play in Canada,” says Frank Graves, president of EKOS Research Associates, which surveyed more than 13,000 people across the country. “But they’re playing themselves out differently.”

Commissioned by The Canadian Press, the poll placed respondents on a scale from most “open” to most “ordered” based on their responses to questions about economic optimism, racial tolerance, and other factors. An open outlook roughly corresponds with acceptance of racial diversity, hope that prosperity is on the rise, and rejection of populist politics. Someone with an ordered outlook, conversely, will tend to be wary of multiculturalism and fearful of de-industrialization, and may see smaller government and protectionist trade policies as means of addressing their concerns.

When EKOS analyzed the results for 22 large urban areas across Canada, it found that five of the most significant hotbeds of ordered attitudes were in southern Ontario: Barrie, Hamilton, London, Oshawa, and Windsor.

Windsor had the lowest portion of “open” respondents in the country at 32 per cent, and one of the highest quotients of ordered feelings (34 per cent of survey respondents). Taken together, these figures indicate that Windsor is the only major urban area in Canada where there are more ordered-minded residents than open-minded ones. 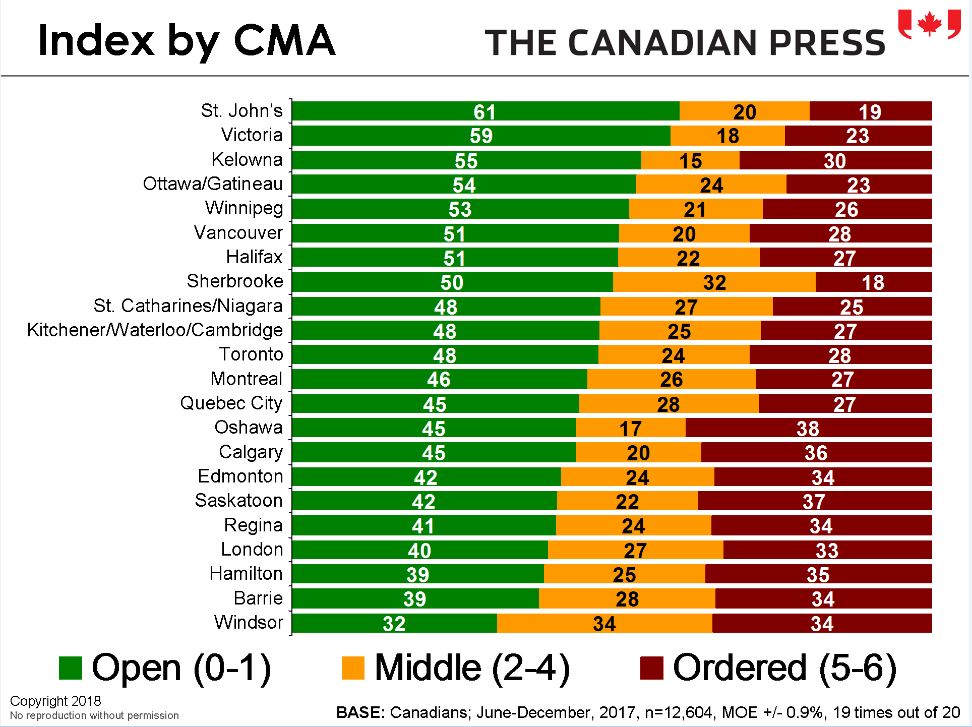 Looking at the data, EKOS concludes that economic upheaval has given rise to order-seeking outlooks. For southwestern Ontario, “upheaval” means lost factory jobs. In a story about the region’s “lost decade” in manufacturing, the CBC noted that the region used to be known as a place that made everything “from cars to ketchup.” But it still hasn’t recaptured the well-paying blue-collar jobs that it lost during the Great Recession — and it may never get them back. “They were part of the manufacturing heartland of Canada, and to some extent, they aren’t anymore,” Graves says.

Economic downturns tend to make immigration — a bugbear for many ordered thinkers — less popular. University of Windsor sociologist Jane Ku suggests the effect can be more pronounced in places like Windsor. In big cities such as Toronto, Ku says, immigrants span the whole socioeconomic range: there are rich and poor newcomers alike. In Windsor, by contrast, newcomers tend to cluster in relatively low-income neighbourhoods. For other Windsorites who are struggling economically, immigrants are perceived as competition in a way that isn’t as obvious in bigger, more cosmopolitan cities.

Another factor helping to make Windsor an outlier on the open/ordered axis: its media market. The border city is uniquely saturated with American radio and television broadcasts. Ku says she’s unsure how big a role U.S. media play in shaping Windsorites’ attitudes, but that the American conversation is impossible to ignore when you live inside Detroit’s broadcast range.

Graves says the EKOS research shows that Canadian populism is a different animal than the U.S. variety: for one thing, it’s less racially charged. Graves says ordered attitudes are not highly concentrated among white, working-class males in Canada the way they are in the U.S.

Echoing the language of his company’s report, Graves stresses that ordered attitudes aren’t a bad thing, but he believes a society functions best when they’re counterbalanced by open outlooks. “Both of these worldviews,” he says, “are critical to a healthy, functioning economy or society.” Graves worries that economic despair coupled with a heightened sense of external threat (say, from terrorism) could combine to make ordered thinkers clamour for an authoritarian “strongman” to come to the rescue.

The EKOS report notes that “ordered” doesn’t necessarily mean “conservative” — while ordered thinkers usually vote for conservative parties and open thinkers for progressive ones, the open/ordered axis does not map directly onto traditional notions of left and right. For example, most open voters support freer trade (contrary to left-wing orthodoxy), while ordered voters tend to favour protectionism (contrary to most establishment conservatives).

So while the report might appear to give some comfort to the embattled Progressive Conservatives, who are trying to stitch themselves back together and compete in a provincial election this spring, Graves says there’s an opportunity for any party that listens sympathetically to the concerns of voters struggling in the 21st-century economy — whether they’re ordered or open in their outlook. As Graves laments, “There’s a lack of communication across … these two different points of view on the world.” 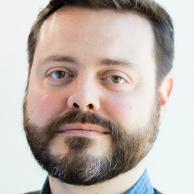 Windsor
Rallying against racism: Students educate and empower at the University of Windsor
TVO.org is speaking to activists across Ontario to find out what's happening in their communities — and how they're fighting injustice. Today, we interview Princess Doe and Natasha Daley of the student-run advocacy group Making It Awkward
Mary Baxter