OPINION: My wife and I booked appointments for the whole family. They were cancelled “due to a lack of vaccine supply.” That’s politically embarrassing for the government — and a warning of things to come
By Matt Gurney - Published on Nov 02, 2020
This year, demand for the flu vaccine in Ontario has overwhelmed supply. (Lars Hagberg/CP)

One of the things you realize as you grow up is that your parents were right about more than you’d want to admit. Among other things, it turns out my mom was right about the flu shot.

A few weeks ago, my wife and I booked ourselves and both our kids for flu shots at our local pharmacy. Our appointments would have been later this week — or as soon as possible, given the waiting list. On the weekend, my mother emailed us to say that her appointment for her flu shot had been cancelled and that ours probably would be, too. She had booked with the same chain of pharmacies that I had hoped to use, but at a different location. This email came after a handful of friends and neighbours had told us the same: they had booked appointments but had them cancelled. I said to my wife, well, I guess we’ll see what happens to our appointments.

We did not have long to wait. Less than 24 hours later, we were notified that our appointments had been cancelled due to a lack of supply. 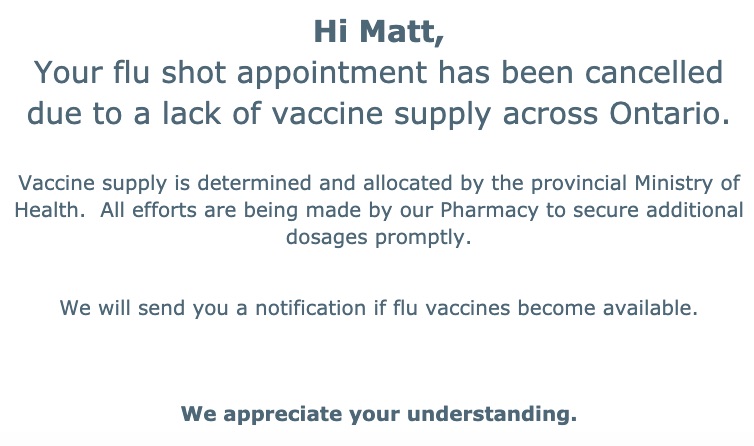 ​Just a few weeks ago, I wrote in praise of the government’s decision to broaden the distribution of flu vaccine as part of its pandemic-response effort. Keeping Ontarians out of the hospital with influenza is an important part of managing the second wave. Every bed that is not taken up with something avoidable is a bed available for COVID-19 patients. Influenza sickens thousands and kills hundreds of us every year. Pushing hard on flu shots seemed a good way to support our hospitals and ease demand on our testing system (COVID-19 and flu have similar symptoms) for what might be a dark winter.

But if you can’t get the vaccine, what’s the point?

Our experience is not in any way an exception. Both Rexall and Shoppers Drug Mart confirmed to me that they are struggling. “Rexall has communicated to customers and patients that flu shots have been temporarily paused due to supply issues that are currently being experienced across the province,” said a spokesperson for McKessen, Rexall’s wholesale supplier. “Vaccine supply is determined and allocated by the provincial Ministry of Health. All efforts are being made by our pharmacy to secure additional dosages promptly.” A Loblaw spokesperson (Loblaw is the parent company of Shoppers Drug Mart) was more succinct: “We’re experiencing a high demand for flu shots, and are working closely with our public health partners to get in vaccinations as quickly as we can.”

Rexall was a bit more direct, but it’s the same message: Don’t look at us. It’s the government’s fault.

The Ministry of Health, in a statement to TVO.org, said that the vaccination program has been very busy this year. “As of November 1, over 4.7 million doses of the flu vaccine have been distributed — more than 1 million doses compared to the same time last year,” the statement said. “In a typical year, by the end of October Ontario’s pharmacies have administered between approximately 200,000 to 250,000 flu shots – this year, they have provided just over 1 million doses.” The statement continued, “The province continues to receive regular shipments of its total order, in addition to continuing to explore all options to procure additional flu vaccine doses. Last week Minister Elliott spoke to Minister Hadju to request that the federal government work with manufacturers to deliver the remainder of the province’s doses purchased through its national bulk purchasing program at an accelerated rate, as well as explore the provision of additional doses beyond what was procured. We are also engaged in conversations with our private sector partners regarding additional opportunities to procure supply beyond the historic levels that have already been distributed to Ontarians.” (Find the full statement below.)

Meanwhile, Premier Doug Ford minced no words in his Monday press conference, chastising both Rexall and Shoppers Drug Mart, by name, for the overbooking that has led to frustrating cancellations. “You know how many flu shots you have,” he said. “So don’t overbook."

So the problem at least is clear: not enough vaccine. But why isn’t there enough vaccine? What happened to what was, as noted, one of the key planks of Ontario’s pandemic plan?

According to Justin Bates, the CEO of the Ontario Pharmacist’s Association, the flu vaccine is distributed to the population via two channels. Public-health agencies procure vaccine from producers and distribute directly to health-care facilities for the inoculation of medical personnel and high-risk patient groups. The public-health agencies also distribute it to pharmaceutical wholesalers, such as McKessen (Shoppers is its own wholesaler), for distribution to pharmacies and then administration to the public. But demand this year has totally overwhelmed supply. And this is, Bates noted, actually good news — of a kind.

“Last year, the Ontario government ordered 4.4 million doses of flu vaccine, but 300,000 of those were never used, and spoiled,” he said. “The government planned this year to order just over 5 million vaccines, so 1 million more than were actually used last year. That’s a 16 per cent increase in the size of the order compared to last year. But what we are seeing at the pharmacies is that demand is up 500 per cent.”

I asked Bates whether this is an example of the government buying only as much vaccine as it wanted to spend money on. He couldn’t comment on the government’s thinking (or was smart enough not to) but noted that industry experts and pharmacists’ associations had themselves tried to forecast what demand would be this year. Using previous years as a baseline and predicting how much extra demand they would see this year, they concluded that they would need approximately 12 per cent more supply for this season than last. The government’s decision to order 16 per cent more, he said, was certainly in line with what experts were forecasting would be needed. No one, Bates added, predicted a 500 per cent surge in demand.

“The process of securing vaccines begins in February,” he explained. “We look at what is happening in the southern hemisphere and get a new vaccine ready. It has to first go through clinical trials. Once it is certified, it needs to then be produced on a massive scale. And then there is a global distribution process to get it from the manufacturer to the public. It is a massively complicated effort — and a very sophisticated manufacturing process. Once a vaccine is certified safe, it takes months to manufacture it in bulk.”

I asked Bates whether there was any realistic chance we would get more this year. He said yes, definitely some. Vaccine that had already been ordered will arrive in the coming weeks. While vaccination is overseen at the provincial level, he added, there are federal reserves and stockpiles. Public Health Canada may choose to release some of that reserve to provinces with high demand. (Recall that the statement from Ontario’s health ministry also noted hopes of securing more from Ottawa.)

But given the long timelines involved in producing a new vaccine, he said, the experience of this year will mostly serve to inform the process next year. There is no enormous idle global production capacity that can rapidly whip up new vaccine to meet demand that’s become clear only in the last few weeks. Many of the key decisions were made months ago, Bates noted — some even before the pandemic hit the West. The best we can plausibly hope for this year is that demand will ease in the coming weeks and supplies will catch up. But that’s not a guarantee or even a prediction. Just a possibility.

It’s not hard to ponder the broader implications of this. Shortages of flu vaccine in Ontario are irritating and politically embarrassing for the government. But this is also a preview of the struggle we will have when and if an effective COVID-19 vaccine is certified as safe and effective. We’ll have to manufacture it, billions of doses of it, and get it distributed everywhere on Earth. Bates said that Canadian officials may well need to adjust the models they’re using to estimate how much COVID-19 vaccine will be needed, given the overwhelming demand for flu vaccine in Ontario.

They may well, indeed. And, in the meantime, if anyone knows where I can get four flu shots, please let me know.

See below the full statement from Ontario’s Ministry of Health:

“Earlier this fall, Ontario launched the largest  flu immunization campaign in the province’s history. Flu season puts pressure on Ontario’s health system every year, and we are particularly cognizant of the risk it presents in the context of COVID-19. That’s why the province has invested nearly $70 million to purchase flu vaccines to deliver a robust and expanded campaign this year, prioritizing vulnerable populations in our long-term care homes, hospitals, and other settings. This was increased by $26.5M to purchased and administer additional doses if they become available from manufacturers as part of the Fall Preparedness Plan.

The province’s campaign has resulted in more Ontarians getting the flu shot, and earlier, than ever before. As of November 1, over 4.7 million doses of the flu vaccine have been distributed – more than 1 million doses compared to the same time last year. In a typical year, by the end of October Ontario’s pharmacies have administered between approximately 200,000 to 250,000 flu shots – this year, they have provided just over 1 million doses.

The province continues to receive regular shipments of its total order, in addition to continuing to explore all options to procure additional flu vaccine doses. Last week Minister Elliott spoke to Minister Hadju to request that the federal government work with manufacturers to deliver the remainder of the province’s doses purchased through its national bulk purchasing program at an accelerated rate, as well as explore the provision of additional doses beyond what was procured. We are also engaged in conversations with our private sector partners regarding additional opportunities to procure supply beyond the historic levels that have already been distributed to Ontarians.

Due to early, increased demand, we urge all Ontarians to contact their local health care provider for more information and to schedule an appointment.

We are also encouraged to report that influenza cases per the national and Ontario surveillance systems are low for this time of year compared to previous years. This is evidence that the historic uptake of the flu vaccine, in addition to the safe hygiene practices being practiced diligently by all Ontarians, is working and will continue to work as we move through the fall and winter season.”