Why society needs to make room for single, childless women

OPINION: Fewer women are having children, and more are now living alone — but we continue to treat the nuclear family as the norm. It’s time to change our cultural attitudes, writes Carla Lucchetta
By Carla Lucchetta - Published on Aug 15, 2018
"I still regularly have to debunk the notion that I hide out with my cats, my knitting needles, and my loneliness," the author writes.

Two new books exploring what life is like for single women without children have made the rounds this year —and, as I am a part of that rising demographic and still regularly have to debunk the notion that I hide out with my cats, my knitting needles, and my loneliness, I welcome them.

Both authors appear on The Agenda in the Summer tonight to discuss why they hope their books will serve as touchstones for others. Kelli Korducki’s Hard to Do: The Surprising Feminist History of Breaking Up looks at historical precedents for women choosing to pursue their own interests, vocations, and paths. Andrea Bain’s Single Girl Problems makes the case that living solo is not a problem that needs to be solved and gives advice about the financial realities of going through life alone.

Recent statistics show that one in five Canadian women will remain childless, and given Canada’s low fertility rate — 1.6 births per woman, one of the lowest among developed countries — it’s clear that more women are delaying childbearing, having just one child, or not having any at all.

The 2016 census also showed a continuing shift in the make-up of the Canadian family. There are now more people living alone than there are couples with children and couples without children. Coming in behind those three groups are lone-parent families, non-family households shared by two or more people, and multigenerational households. Although those solo-living numbers include older Canadians, the census also indicated that fewer seniors are now living alone. 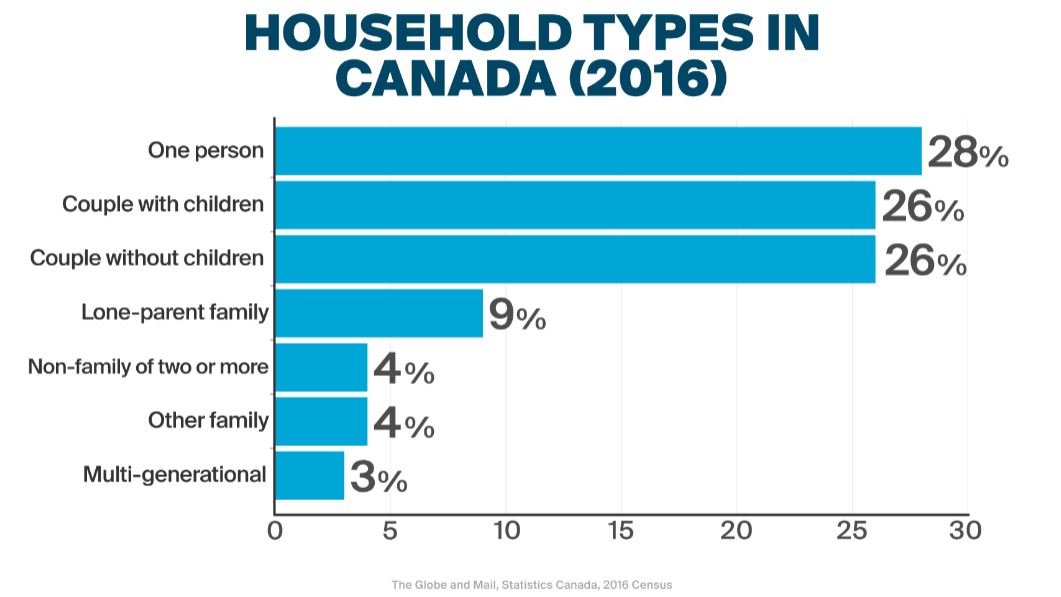 Demographers believe that low birth rates and one-person households are the result of such factors as the 2008 recession, women’s financial independence, and fertility options that were unavailable to earlier generations.

The fact that more people are choosing to live alone and not have children will have a significant effect on the country’s economy, policies, and social programs.

“Canada’s population growth currently depends entirely on immigration,” writes Doug Saunders in his 2017 book Maximum Canada. “The national population has been growing, at a modest rate averaging about 1.2 per cent each year, but not as fast as the average age of Canadians has been increasing ... This has a direct impact on Canada’s capabilities — that is, on the ability of our governments, agencies and charities to act effectively on things like environment, infrastructure, poverty, and justice for indigenous peoples. That’s because an aging, slow-growing population means a country that has both fewer fiscal resources and higher costs.”

I call being unmarried and childless “my accidentally alternative life” because ours is a society that, as Korducki puts it, privileges married couples with children and often fails to acknowledge lives that lie beyond the norm, beyond nuclear families.

“I don’t really think a lot of women realize how common their situation is,” says Korducki. “I don’t know if people are aware that they’re not anomalies. When I was going through the breakup that I wrote my book about, I didn’t realize I wasn’t a freak of nature. I think we need to be louder about our existence.”

In an attempt to counter assumptions about my life, I often find myself rhyming off my haves (my career, my friends, the freedom to travel, the time and ability to help support the younger members of my family, and, yes, my cat) and downplaying the more concerning aspects of living alone — loneliness, fears about my financial future and about who will take care of me in my old age. (If I’m honest, it’s that last one that gets most of my anxious attention.)

My positively spun answer is perhaps designed to alleviate my embarrassment and shame about not having adequately contributed to society, to the economy, to my family’s bloodline. The truth is that, unlike some of the younger women I know, I haven’t yet learned to be comfortable going against the grain. And as Sheila Heti writes in her novel Motherhood, “There is a kind of sadness in not wanting the things that give so many other people their life’s meaning,” she writes. “There can be sadness at not living out a more universal story — the supposed life cycle.”

When I asked Korducki why she was initially so afraid of being alone after her breakup, she said, “I had concerns about dying alone, not having a partner, not having someone who has my back through life. The way our society is structured — everyone fragmented, no real community anymore — you really do die alone.” As she was talking, I felt my chest tighten. This is my reality, my deepest fear. This is why I’ve taken an interest in the new trend of co-shared houses and starting asking my friends about their plans for their older years.

Thankfully, younger generations of women don’t seem to feel such pressure to conform. They may worry about not having a partner, but there’s more willingness to question the norms enforced by their families and by society. I’ve seen this happen in my own Italian Catholic family.

“Marriage is no longer a prerequisite for child-rearing, and child-rearing is no longer a given altogether,” writes Korducki in Hard to Do. “Even within the many subsets of society whose conservative values govern adherence to a nuclear-family model, personal satisfaction is framed as the central facet of the package deal.”

Korducki wonders whether her millennial generation will be the one to create a new paradigm for thinking about family. “Maybe we will be at the forefront of a trend toward extended familial networks of friends and partners that more manageably fulfill our many needs. Maybe we will recognize the value in different types of close relationships in a way that lifts the existential pressure currently bearing down on romantic partnerships.”