Why rooftop beehives are bad for native bees

Companies tout the environmental benefits of their rooftop apiaries, but researchers say that honeybees can have a negative impact on biodiversity
By Tim Alamenciak - Published on June 26, 2018
Research suggests that introducing invasive bees creates more stress for native pollinators. (iStock.com/bo1982)

What would you do if thousands of strangers suddenly started going to your favourite bars and restaurants? Every time you wanted a table, it would be taken. Your order would take ages. Your spot would no longer be your spot.

It’s a situation that locals in tourist areas like Prince Edward County would probably sympathize with. It’s the kind of issue that brings hundreds out to oppose condo developments. And it’s exactly what Ontario’s native bees are now facing.

Property owners have turned to beekeeping as an environmental strategy, claiming that hosting honeybee hives is good for the ecosystem — but it’s not that simple.

There are 20,000 species of bee worldwide, more than 700 of which are native to Canada. Honeybees, though, are not native to this country, meaning that each hive introduces thousands of invasive bees into the ecosystem.

A study published last week in Scientific Reports that looked at a protected natural area in southern France found that managed hives suppressed native bee occurrence by 55 per cent and foraging success by 50 per cent — managed honeybees, then, get to jump ahead in the buffet line before native bees even get seated.

The results of the study suggest that introducing invasive bees creates more stress for native pollinators. A 2016 paper by USDA research entomologist Jim Cane found that a honeybee colony consumes enough pollen to feed about 110,000 offspring of average-sized solitary bees.

And managed honeybees, in addition to being more numerous than their indigenous counterparts, are better at finding and collecting pollen, according to Charlotte De Keyzer, a PhD candidate at the University of Toronto.

“They have bees that go out and scout and look for resources, come back to the hive, have amazing communication skills, and can bring foragers back to that spot — whereas solitary bees are working alone in isolation,” says De Keyzer, who studies bees in urban environments.

More than 90 per cent of bee species in Ontario are solitary — meaning they don’t live in hives, De Keyzer says.

“There's just massive confusion among the public,” says Sheila Colla, assistant professor of environmental studies at York University. “Most people growing up think bees make honey, they're yellow and black, they sting, they live in hives — but the vast majority of [Ontario] bees don't live in hives, are not black and yellow, do not sting, and do not make honey.”

Colla and University of Toronto bee researcher Scott McIvor recently co-authored a paper warning of the negative effects managed honeybees can have on biodiversity and urging caution in the expansion of urban beekeeping.

“I think [beekeeping] is a really good hobby for people,” she says. “People want honey. But if your goal is to conserve bee populations, then putting in 40,000 non-native insects into a system without adding to the habitat will basically never be a good thing.”

Increasingly, though, property owners have taken to hosting hives and touting their environmental benefits (some researchers have taken to calling this “bee-washing”). Oxford Properties Group Ltd. — the real-estate-investment arm of OMERS pension fund — is partnering with urban-beekeeping supplier Alvéole to bring hives to the rooftops of its businesses. (Full disclosure: TVO’s offices are located in an Oxford-owned building that now boasts hives on its roof.) In 2017, they launched a two-hive pilot with 5,000 bees at Richmond Hill’s Hillcrest Mall — the colony now numbers nearly 70,000.

Blake Retter, Toronto director of Alvéole, says that rooftop hives have significant educational value and that when they’re installed on downtown buildings, they can start a conversation and raise awareness about pollinator health.

“What we see as the true value of what we do, when you say save the bees, it's more about raising awareness of these issues that are facing both wild bees and honey bees,” says Retter. “It makes them seem less alien and strange. They're a great gateway insect for the general appreciation of all pollinators and insects.”

The mall highlights the hives on its sustainability page, and staff promote its apparent environmental bona fides on television.

"We just thought that it was a wonderful way to augment what we're already doing for our environment, and we really liked the way this would positively impact the biodiversity in the area. And it's just fun, right? Like, it's just fun to have beehives on the roof,” Lisa Resnic, marketing director at Hillcrest Mall, said in a spot on the Rogers TV YouTube channel. (Resnic declined to speak with TVO for this story.)

But managed hives do not have a positive impact on biodiversity — in fact, research indicates that they could be bad for it. Because our native bees co-evolved with the local plants, they are uniquely suited to pollinate them. Some crops, like blueberries and tomatoes, need to be “buzz pollinated,” meaning the flower is vibrated by the bee. Honeybees can’t do this, but bumblebees can. Solitary bees don’t venture far for nectar, while honeybees can travel up to 5 kilometres from the hive, which could put pressure on solitary bees in that environment. Real estate is just as scarce for bees in Toronto as it is for humans.

“It's quite difficult to just move over if a huge amount of honeybees just plop down on a rooftop next to where you were making your nest and happily foraging,” says De Keyzer.

Colla is also worried about the potential for the transmission of disease. The rusty-patched bumblebee, once the most common bee in Ontario, disappeared in the 1980s and 1990s— researchers believe disease from managed bumblebee hives may have been a factor.

The strategy for conserving native pollinators may not seem as pretty to humans as quaint jars of honey, but it respects biodiversity and maintains the health of the ecosystem: to help indigenous bees thrive, native plants and grasses should be left to grow long and wild. Native flowers should be planted, and dead stems and leaves should be left at the end of the year, as bees sometimes nest in them.

“Everyone likes perfectly manicured lawns, but if the goal is to conserve bees, things do have to get to get a little bit messy,” says Colla.

Environment
The Dangerous Mosquito
Historian Timothy Winegard discusses his book, "The Mosquito: A Human History of our Deadliest Predator."
Food
The Future of Food on a Hotter Planet 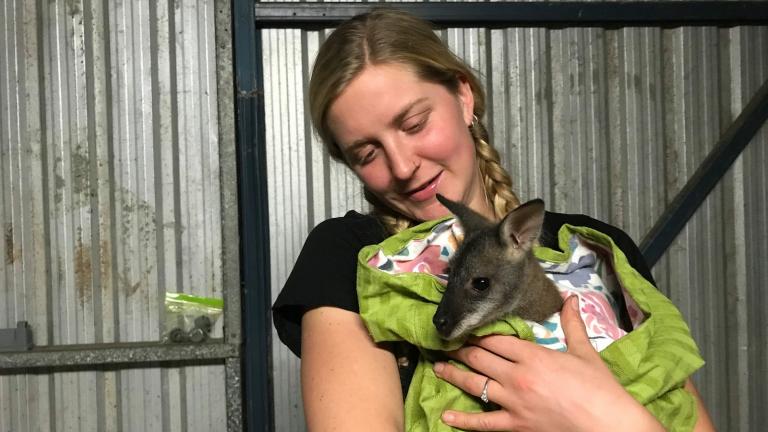