OPINION: Ontario’s recently signed agreement-in-principle with the Algonquins of Ontario is the largest land claim ever negotiated in the province and its first modern-day treaty. As Russell Diabo writes, it’s also deeply flawed
By Russell Diabo - Published on Nov 08, 2016
Minister of Indigenous and Northern Affairs Carolyn Bennett signed an agreement-in-principle with Algonquins of Ontario last month. (Chad Hipolito/Canadian Press)

Last month, the governments of Canada, Ontario and an entity called the Algonquins of Ontario (AOO) signed an agreement-in-principle (AIP) for a land claim covering 36,000 square kilometres of eastern Ontario.

In exchange for giving up their historic claim to the land, the Algonquins of Ontario will receive $300 million and 1,175 square kilometres, among other benefits — the final treaty will take years to negotiate.

It’s the largest land claim ever negotiated in the province, and includes swaths of territory Algonquin peoples have claimed since the late 18th century. Newspaper editorials, and the federal and Ontario governments themselves, have hailed it as a step forward in terms of both modern treaty negotiations and the work of reconciliation.

However, as both an Indigenous policy specialist and an advisor to several Algonquin First Nations currently challenging this recently signed agreement, I’m deeply aware of several significant flaws: This isn’t the ideal agreement it’s being made out to be. 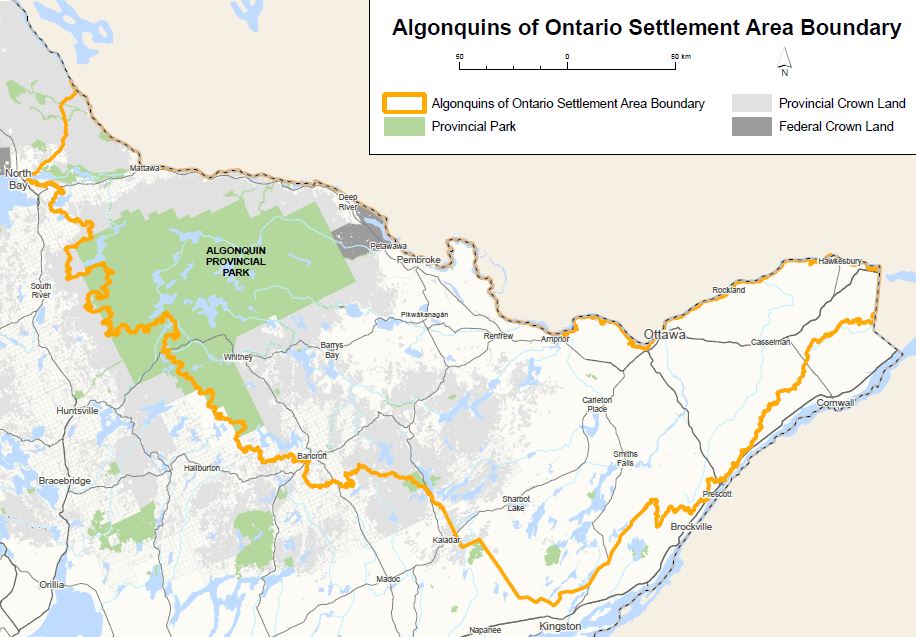 Missing from the negotiation table

There are currently 10 federally recognized Algonquin communities, with a total population of approximately 8,000 to 10,000 people. Nine of these communities are headquartered in Quebec with one, the Algonquins of Pikwakanagan (at Golden Lake), located in Ontario. Three other Ontario First Nation communities (Wahgoshig, Matachewan and Temagami) are of partial Algonquin descent.

In January 2013, three of the nine Quebec Algonquin communities, who are not currently part of the Ontario treaty — Timiskaming, Wolf Lake, and Kebaowek (Eagle Village) — issued a legal notice of assertion of Aboriginal title and rights to the governments of Canada and Ontario, consistent with a 1997 Supreme Court of Canada decision that set out guiding principles for asserting Aboriginal title.

The territory covered under this legal notice measures over 34,000 square kilometres and straddles the Quebec-Ontario border along the Upper Ottawa River, with a large portion of it located in Ontario. And since the rights being asserted cross provincial boundaries, reaching an agreement will require the attention and commitment of the government of Canada, as well as the governments of Quebec and Ontario. If the federal and Ontario governments do not want to negotiate the title and rights of the Algonquins of Timiskaming, Wolf Lake and Kebaowek (Eagle Village) in the current claim area, they could potentially file a formal statement of claim. Depending on what they might ask for in that statement of claim, it could slow, alter or halt the negotiation process.

The claims these three Quebec First Nations are making in their assertion also overlap with more than 3,600 square kilometres of the territory covered by the Ontario-Algonguin agreement-in-principle, and involve a separate parcel of land than the AIP gives the Algonquins of Ontario. 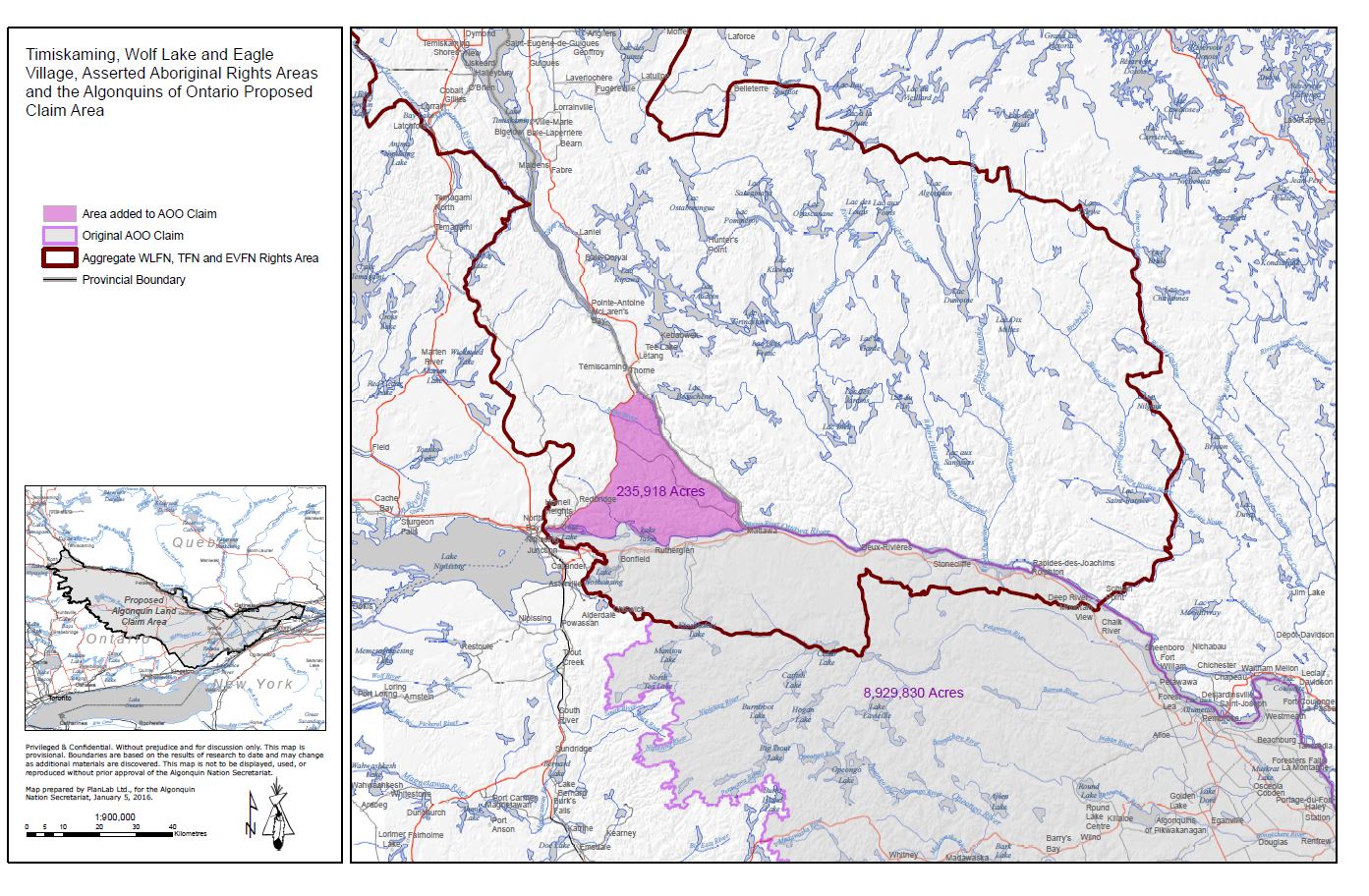 Just who is an ‘Algonquin’?

Another major flaw in the agreement is its definition of who is an Algonquin.

Some context: In the early 1990s, without any consultation with the Algonquin communities headquartered in Quebec, the governments of Canada and Ontario began negotiating a land claim specifically with the Algonquins of Pikwakanagan — recognized as a "band" within the meaning of the Indian Act and as "Indian peoples" under section 35 of the Constitution Act — to deal with land rights solely on the Ontario side of the border.

In the years since, Canada and Ontario expanded the definition of who qualifies as an Algonquin and who is entitled to participate in those negotiations, to the point where the Pikwakanagan Algonquins are now outnumbered, according to government records, by nine satellite groups on the Ontario side of the Ottawa Valley. These satellite groups are made up of mostly unregistered individuals who claim some Algonquin ancestry or connection.

The just-signed, broad Ontario-Algonquin agreement uses these same criteria for identifying Algonquins. The problem is that these criteria focus on individual genealogy rather than looking at the existence of a community, which is the legal standard as set out by case law.

The chiefs from Timiskaming, Wolf Lake and Kebaowek (Eagle Village) have a very real concern that the federal government’s current approach to beneficiaries in the Algonquins of Ontario claim gives standing to individuals and groups who may not meet those community-based requirements for title holders.  By allowing this, and because of how federal rules on treaty-making works, it’s possible that non-title holders could be in a position to extinguish Algonquin title claims and rights to territory that federally recognized, status Algonquins in Quebec are currently asserting their rights to in court.

These definitions also have an impact on the negotiation process itself. For example, in March the Algonquins of Ontario held a referendum on the agreement-in-principle. Just under 3,350 votes were cast, with over 90 per cent of participants voting in favour of the AIP. However, registered members of Pikwakanagan made up less than 10 per cent of the list of eligible voters in this referendum. When the Pikwakanagan Chief and council for registered members of the Algonquins of Pikwakanagan held its own vote, 57 per cent rejected the AIP.

These large numbers of “instant Algonquins” undermine the legitimacy of the treaty negotiations, and threaten the interests of legitimate rights-holders.

The third flaw with the agreement is one that affects all land claims in Canada: It is subject to a federal policy called the Comprehensive Land Claims Policy, which has guided all land claims in Canada since 1973. While some Indigenous peoples have agreed to negotiate under the policy over the years, others have objected to it on the grounds that it includes a number of terms prejudiced against Indigenous people’s interests.

Currently, the Comprehensive Land Claims Policy requires all land claims of unextinguished Aboriginal title (i.e. areas where historic land treaties weren’t signed) to comply with a set of seven “core” mandates. Among these: negotiating parties must give up pre-existing Indigenous land rights and accept that the Crown is the underlying title-holder to all lands and resources in the claim area. Another of the terms requires Indigenous groups to consent to the legal release of the Crown from liability for past violations of Aboriginal title and rights.

While the recently signed Algonquin-Ontario agreement is non-binding, it does mean that the AOO is essentially agreeing to extinguish Algonquin land rights and release the federal and Ontario governments from any liability for their unjust treatment of Algonquin peoples.

There are a number of reasons to question these conditions as the basis for final treaty negotiations. To start with, they don’t reflect current precedents in case law. Last December, the Assembly of First Nations also formally called on the federal government to replace the Comprehensive Claims Policy with one that acknowledges these title rights.

The Algonquin AIP also doesn’t reflect international principles regarding Aboriginal peoples. In 1999, the UN Committee on Economic, Social and Cultural Rights and the UN Human Rights Committee recommended the “extinguishment, conversion or giving up of Aboriginal rights and title should on no account be pursued by the State Party” in terms of land claims.

The agreement-in-principle has set out a five-year timeline for reaching a final signed agreement. But unless everyone’s at the table, unless the participants have a sharper sense of who an Algonquin and beneficiary is, and unless the federal government starts resolving the problems with Canada’s Comprehensive Land Claims Policy, that timeline doesn't matter. The Algonquins who are excluded from negotiations are likely to take political and/or legal action before a final agreement is reached, and they will be entirely justified in doing so.

Russell Diabo, a member of the Mohawk Nation at Kahnawake in Quebec is a policy adviser to the Algonquin Nation Secretariat, a Tribal Council representing the Algonquin First Nations of Wolf Lake, Timiskaming and Barriere Lake.

Russell Diabo, a member of the Mohawk Nation at Kahnawake in Quebec is a policy adviser to the Algonquin Nation Secretariat, a Tribal Council representing the Algonquin First Nations of Wolf Lake, Timiskaming and Barriere Lake.