A Slovenian and a Canadian flag flap listlessly, one gaining wind as the other settles, outside a retirement and long-term care centre in Etobicoke.

To the left of the entryway is a small chapel with vaulted ceilings where daily Catholic mass is offered. It’s almost noon, and the residents are shuffling into their dining rooms for lunch. Mati, my grandmother, lives here. As I cut her pork cutlet and boiled potatoes for her, she has a friendly conversation in Slovenian with the woman to her right. “Moja granddaughter!” she says to the woman, nodding her head in my direction. After she finishes her apple strudel – a dessert familiar to her and many other residents here – I push Mati’s wheelchair past pastoral paintings of her home country into her sunny, semi-private room. I tend to her plants, and we chat while watching daytime television.

This is Dom Lipa Nursing and Retirement Home, one of more than 50 ethno-culturally focused long-term care centres in Ontario. The queue for a bed in any Ontario nursing home is long, but seniors looking for culturally specific homes endure the longest wait of all.

This backlog puts a strain on hospitals, and more significantly patients and their families. In 2013 and 2014 the median wait time for a bed in a long-term care home in Ontario was 116 days for those who wait at home, and 69 days for those in hospital. Nine years ago, those numbers were 68 and 18 days respectively. Seniors hoping for a place in an ethno-culturally specific care home wait far longer: up to six months more than those who apply to mainstream homes.

According to a recent Wellesley Institute report about delivering equitable long-term care to the Greater Toronto Area’s diverse population, the long wait times suggest applicants hold out for the home of their choice and “indicate that our current system does not meet the linguistic and ethno-specific needs of those who need long-term care.” For spaces at GTA care homes such as Mon Sheong Centre, Hellenic Home for the Aged and Yee Hong Centre for Geriatric Care, applicants can wait upwards of 2,400 days — up to six years. 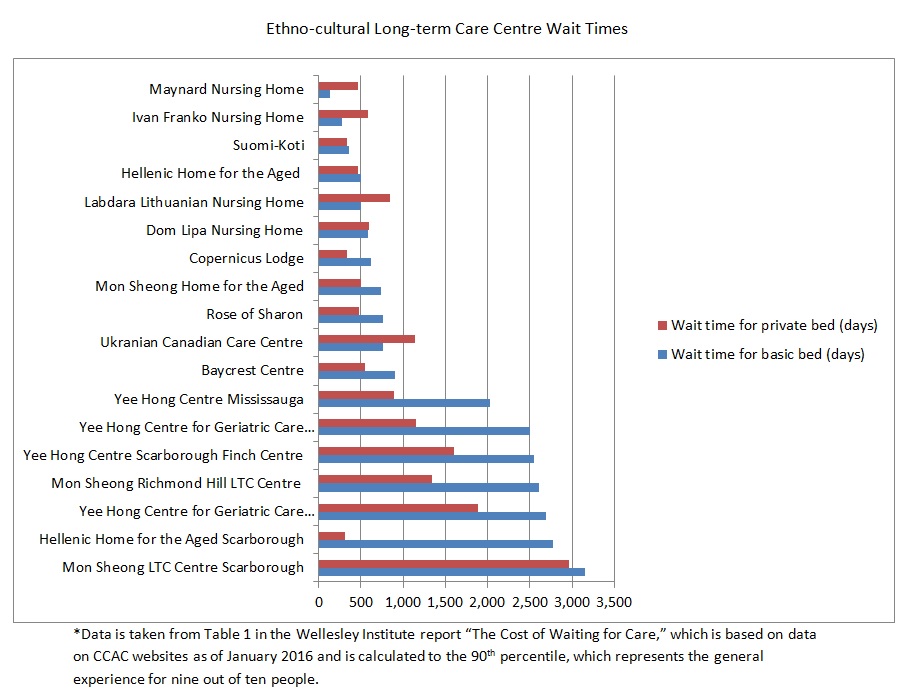 There are 56 ethno-specific homes across the province, serving ethnicities from Finish to Filipino to Portuguese, and faiths such as Catholicism and Confucianism. Given the GTA’s dense and diverse cultural landscape, many of these homes are based in and around Toronto.

A number of them have long histories, deep community involvement and offer culturally specific activities and cuisines to their residents. Toronto’s Baycrest, one of the earliest, opened in 1918 as the Toronto Jewish Old Folks Home. According to its website, the home was “established to provide Jewish elderly people with care that reflected their religious traditions.” Many more, such as Villa Colombo (Italian), Mon Sheong Long-term Care Centre (Chinese), Copernicus Lodge (Polish) and The Hellenic Home for the Aged (Greek) were built in the 1970s.

While many of these homes maintain that their centres were established to address a growing senior population of a particular ethnicity, their proliferation coincides with a time that some policy experts classify as long-term care aversion, where “issues of geriatric concern were overshadowed by the ambitions of political actors committed to a national health system centred on hospital and curative medicine,” from approximately 1945 to 1970, writes Canadian studies scholar Amy Twomey. The next 10 years, she continues, were characterized by vacillating government involvement.

Long-term care has evolved and improved since, but it has by no means been perfected. As governments grapple with addressing an aging baby boomer population that will likely require long-term care by 2030, building more nursing homes and fitting in more beds is only part of the challenges Ontario’s long-term care system faces. Tom Carrothers, chair of the advocacy committee for Family Council Network 4, says long-term care should be focused on socialization, not institutionalization. “[Residents] are operating as if they are on an assembly line, in my opinion. They have to get up. They have to get fed. They have to get toileted, etc ... it’s not what we want for our loved ones and our family,” he says in an interview with 580 CFRA News Talk radio.

By their very nature, however, Ontario’s ethno-cultural or ethnic-specific homes actively put into practice socialization over institutionalization.

Seniors whose lives before they entered care were rooted in culturally specific backgrounds can face culture shock and a multitude of barriers and inequity when it comes to quality long-term care.  A 2015 study from the University of Texas Health Science Centre found residents in mainstream homes experienced a particularly difficult transition to long-term care, with issues such as inefficient communication, discrimination, isolation, misdiagnosis and misleading assessment due to language barriers, nutrition problems and an overall decrease in quality of life.

When placed in a home suited to their ethnic or cultural needs, on the other hand, the study found that minority elders experienced reduced stress and eased transition; higher resident morale, self-esteem and satisfaction; and greater physical and psycho-social well-being.

Before moving to Dom Lipa, Mati’s experience with long-term care was vastly different. Scowls, hunger strikes, screaming fits and general misery made up her days and our visits. My mother would try to calm her and coax her to stop screaming to no avail. This became routine, as did the teary, guilt-ridden and silent car ride home.

While most ethnic-specific long-term care centres gain strong acceptance among their own community and others, some critics have trouble with their premise. In 2012, Toronto Star columnist Heather Mallick considered the ethicality of these homes. “I dislike the idea that anyone, even the elderly, can be made comfortable only with others of their own ethnicity, which is more than language,” she wrote. “I’m worried that Canadian ethnic groupings now run from birth until death. This was not the multiculturalism Pierre Elliott Trudeau dreamed of. He was talking about tolerance, not avoidance.”

Whether you consider such residences a pillar or pitfall of multiculturalism, the demand for quality long-term care for elders, especially visible minorities, will only rise in tandem with the onset of baby boomers aging into that demographic.

Most importantly, ethnic-specific homes practise a philosophy of person-centred care. The Alzheimer Society of Canada has long touted the benefits of providing care that addresses the unique needs, personalities, histories and values for individuals with dementia.

“[Person-centred care] is simply to understand the person, what their goals are in life, what their experience has been, the relationships that they value and how can their current circumstance be addressed in a way that reinforces things that that person thinks is important,” says David Harvey, chief public policy and program initiatives officer at the Alzheimer Society of Ontario.

Harvey illustrates this philosophy with a helpful exercise he learned at a recent workshop on person-centred care: “The speaker asked everyone to take a couple of minutes and to think about what they would want a care provider to know about them if they were no longer able to communicate that information themselves. And it was really interesting … so little of it had to do with social status, income, or the work they had done. So much has to do with the things we enjoy in life, our relationships, primarily with family, the things we enjoy and the things that we don’t enjoy. And that’s really the idea of person-centred care.”

In typical Slovene stoicism or maybe out of modesty, Mati doesn’t offer much of an impassioned response when I ask her how she likes Dom Lipa. “It’s not bad!” isn’t very convincing, I know. But take it from me, that translates to pretty darn great.

Sarah Dziedzic is TVO’s Current Affairs and Documentaries intern and a student of professional writing and communications at Humber College. 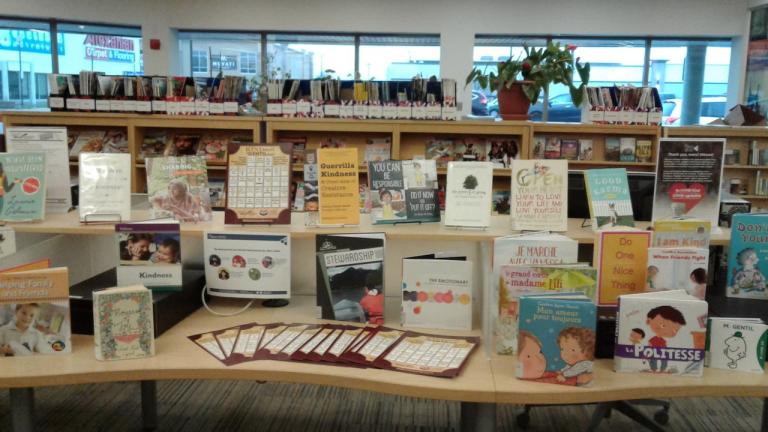 Ottawa
Long overdue: Why more Ontario libraries are going fine-free
A growing number of libraries are turning a new page — and ditching the late fees that can act as barriers to marginalized and lower-income patrons.
Kieran Delamont
Society
Time for Canada to Scrap the Monarchy?
Society
Justin Ling: Reporting on Toronto's Serial Killer
Politics
Harnessing the Power of Canadian Expats
sfy39587stp16