Why LGBTQ indigenous communities struggle with healthcare for the homeless

By Steph Wechsler - Published on Jun 17, 2016
Local health providers in urban areas must do more to support their two-spirit and queer indigenous community members.

When asked about his lifestyle at a medical appointment last year, Chris Pike disclosed the following: alcohol isn’t traditional to indigenous culture, so he doesn’t drink, or do drugs or smoke commercial tobacco.  But when he told his two doctors of his participation in sweat lodges, they referred to this ceremonial participation as an “odd and secret ceremony.”

That doctors at a major downtown hospital would say this in 2015 is “quite disturbing,” he says. Pike, a clinician and therapist, is a proponent of culturally safe healthcare, a major focus of his employer Anishnawbe Health Toronto. The approach requires understanding of the myriad ways individuals experience their identities, how that relates to culture, and respecting how those facets have been affected by legacies of colonization and residential schools.

“Homophobia, transphobia and two-spirited phobia are not traditional,” says Pike. While no two Indigenous communities are the same, many have undergone drastic adaptations in the way they interpret, react to and welcome gender diversity. These variations have had lasting and intergenerational effects on how Indigenous youth’s identity and health will fare.

Two-spirit, third and fourth gender are just some of the gender identities given names by Indigenous communities, with countless more being represented in their languages. Two-spirit, a term founded in 1990 at the third annual intertribal Native American/First Nations gay and lesbian conference in Winnipeg, is a derivation of the Ojibwe and Anishnabe term niizh manidoowag, or “two spirits.” It has different meanings to different peoples, but the phrase, designed to help recover pre-colonial ways of being, often signifies a person’s dual embodiment of masculine and feminine spirits. Traditionally, two-spirited and gender nonconforming people were revered in their communities, given high ceremonial roles and access to male and female duties.

While the legacies of colonialism and residential schools have had far-reaching intergenerational impacts on Indigenous communities across Canada, two-spirited people have experienced distinct setbacks. Once revered, Christianization and the inflection of patriarchal and heteronormative standards stigmatized two-spirited people for the first time.

This stigma has material consequences in health. Both Indigenous and queer youth are disproportionately represented in local and national populations experiencing homelessness, at risk to attempt suicide or to experience violence.

Last year, Toronto opened its first LGBTQ shelter, YMCA’s Sprott House. Street Needs Assessment data reflect the disproportionate rates of queer youth homelessness, and mental and sexual health outcomes. But in a city with a large and growing Indigenous population, not as much is known about Indigenous health outcomes for two-spirited youth.

In 2002, researchers with the McGill School of Social Work ­– Shari Brotman, Bill Ryan, Yves Jalbert and Bill Rowe – co-authored “Reclaiming Space-Regaining Health: The Health Care Experiences of Two-Spirit People in Canada” to engage with what they call a dearth of information on two-spirit health outcomes in queer academia. According to them, “few practitioners, policy makers or researchers in the field of glbt health are even aware of the term Two-Spirit.” And, according to the National Aboriginal Health Organization, studies that included transgender and two-spirited people in Ontario showed that 28 per cent had attempted suicide because of ways that have been treated due to their identity. Different communities have different health outcomes, but national averages reflect that suicides in First Nations are twice the rest of the Canadian population.

“Where there’s intersections of oppression or marginalization, you have a lot of wounding and pain,” says Pike, who identifies as two-spirit. 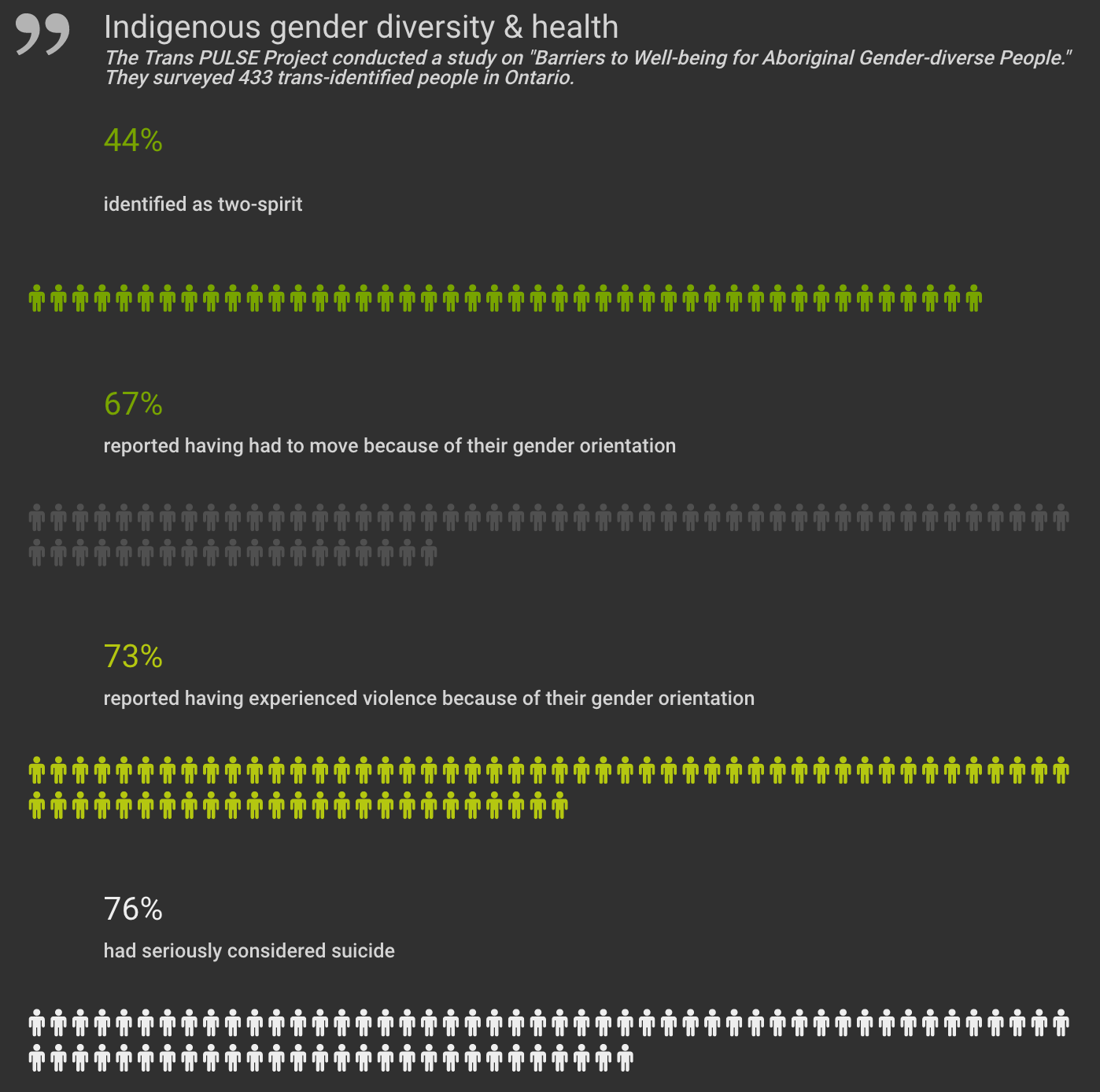 “It’s not just a health issue: it’s a social issue,” says Nicole Tanguay, who has lectured on social determinants of health, worked as an HIV/AIDS educator at Anishnawbe Health Toronto and works with the Native Youth Sexual Health Network. “It’s about how we feel about ourselves and how other people treat us.”

Anishnawbe Health, and other providers that practice culturally safe health care, don’t compartmentalize the aspects of what they see as vital to wellness: self-esteem, culture, land and justice all have roles to play in healthy bodies.

All these elements affect individuals uniquely: “We try to contextualize people’s problems here, so a lot of what many practitioners in dominant culture would see as a diagnosis we see as a natural consequence of colonization,” says Pike.

Anishnawbe Health is unique in offering wraparound healthcare in both Western and traditional models. Pike estimates that 60 per cent of their staff are Indigenous, offering their clients a staff who reflects their reality and the option of whichever biomedical or traditional treatment that they’re most comfortable with. While one patient may prefer, for example, a general practitioner of medicine in a biomedical framework, another may be better served by a traditional healer, elder or naturopathic doctor.

Tanguay emphasizes the importance of having healthcare staff that represents their patients, pointing to the deployment of non-Indigenous workers to the mental health crisis unfolding in Attawapiskat as an example of an approach perpetuates the problem.

Tanguay has spent the last 30 years on social work, and is now focusing on the integrative healing power of art and social service. At the Native Youth Sexual Health Network, Tanguay conducts skills-sharing and writing workshops with youth that explore the meaning of two-spiritedness. 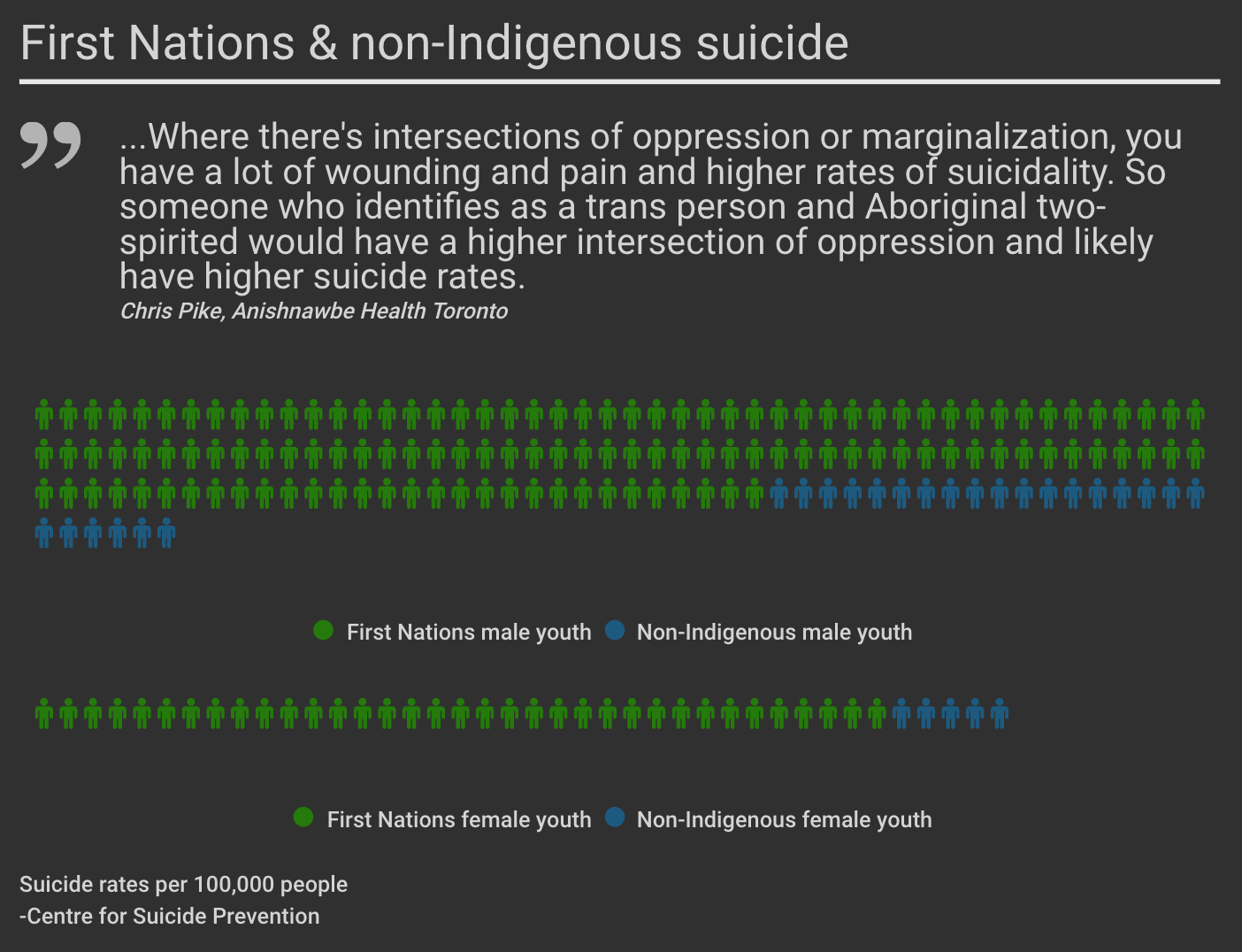 Kira Vallen says she learned more about herself off the reservation than on. She dreams of going to visit the Smithsonian Museum in Washington, D.C. to see its history of transgender people. She often says you can call her the “Trans Grandmother.” Sitting on a bench outside downtown Toronto’s Allen Gardens on the first palpable day of spring, Vallen calls over someone she recognizes across the way, who runs over to hug her. This person looks barely 20 years old and very thin, wearing a leather jacket and missing most of her front teeth. She tells Vallen that she’s just skipped out on detox at the hospital, not being able to hack the methadone, and ran off from her boyfriend after getting stabbed. But she said they’re hanging in there.

“She is a suicide candidate on reserve,” says Vallen.

Indigenous — particularly two-spirit, third gender and queer youth — flock to cities to find community in each other, says Vallen, and gain access to health services geared towards them. On reserves, she says, “you don’t have Women’s Health Clinic across the street or the Anishnawbe Health two-spirit sweat,” she says, referring to the organization’s sweat lodge hosted for their two-spirit community members.

Vallen, who identifies as third-gender – a term used by some people who identify as neither male nor female, and Vallen prefers – from the Saugeen First Nation, says that people “are more accepting of transgender natives” in cities than on reservations: “Where would you want to be? Where I’m accepted or not accepted?”

Art Zoccole, executive director of 2-Spirited People of the 1st Nations, says that all First Nations and communities approach gender diversity differently, but some areas are reliably less hospitable than others.

Zoccole, who is from Northwestern Ontario and has done a lot of foundational research on HIV/AIDS and Indigenous communities, says he thinks that two-spirited people are accepted in many rural areas like Fort Francis, Kenora, Dryden, and Thunder Bay area. “But if you go further north,” says Zoccole, “to the fly-in communities, there seems to be more stigma and discrimination against two-spirit communities.”

In places that feel forgotten, like Attawapiskat, people are out of care’s reach, Tanguay says. And, despite increased attention to this one community in the wake of its emergency declaration, Tanguay observes that, despite general knowledge about mental health risk factors, no one has addressed how many of the youth who have taken their own lives there were two-spirited.

Some are concerned about the invisibility conferred by the sheer lack of information on two-spirit and gender nonconforming Indigenous youth. “It’s just very telling,” says Pike. “I think it goes to the hidden nature of our community, that there’s more work to be done.”

But he feels that, through community-based programs and more openness in the wake of the Truth and Reconciliation Commission report, increased awareness can create space for two-spirited communities. “As we each do our healing work and our wellness work, and the TRC’s part of that for some of us, we will have our voice,” says Pike. “As more of us get healthy and well, and we support each other to get more healthy and well, we will just have our space in that alphabet soup of queer identity. Because we have a very unique space.”

Steph Wechsler is a freelance writer and master’s candidate at the Ryerson School of Journalism. Recently, she has contributed to the Ryerson Journalism Research Centre, J-Source and rabble.ca.

This story originally appeared online as part of a Ryerson Journalism School project on Truth and Reconciliation, and is reprinted here with permission.

Steph Wechsler is a freelance writer and master’s candidate at the Ryerson School of Journalism. Recently, she has contributed to the Ryerson Journalism Research Centre, J-Source and rabble.ca.