Why isn’t Waterloo Region a leader in open government data?

In a technology-focused area, ‘civic engagement doesn’t pay the bills’
By Allison Leonard - Published on Jan 25, 2018
The Region of Waterloo and its three largest cities – Waterloo, Kitchener and Cambridge – trail behind other local governments in Canada when it comes to offering data openly to their residents. (Illustratedjc/Wikimedia.org)

​WATERLOO — The mayor of Waterloo says his city faces the classic shoemaker’s dilemma: Despite its status as a leading technology hub, it lags when it comes to freely and constructively sharing its own data.

“What children run shoeless? The shoemaker’s children,” Dave Jaworsky says of his city’s existing open data platform, which recently failed to measure up to equivalents in a country-wide ranking.

“The city is very tech savvy. There is tons of opportunity — we’re home to companies like Shopify, Thalmic Labs, two universities,” he says. “But I believe that’s left us shorthanded when it comes to exploring open government projects.”

A quick search on Waterloo’s open data portal reveals that the city is not walking around entirely shoeless: Its datasets include everything from budget forecasts to election results, road closures and freedom of information requests.

However, many other municipalities across the country are running with open data while Waterloo walks. In last year’s Open Cities Index — an annual ranking conducted by Public Sector Digest and Canada’s Open Data Exchange — the City of Waterloo failed to reach the Top 20 list of municipalities leading the charge on open data initiatives.

Three other local governments in what’s often referred to as Canada’s Silicon Valley were also included in the survey: the Region of Waterloo, and the cities of Kitchener and Cambridge. They too fell short of the Top 20 ranking that considered three key factors: readiness to foster open data initiatives, implementation of open data goals, and impact of open data.

At their best, open data (also known as “open government”) initiatives allow people to browse, publish, and redistribute publicly available information as they see fit. Possible applications for open data are widespread: With easy access to budgets, journalists can better report on governments; citizens benefit from easy-to-access maps of road closures; transit systems (or third parties) can build an app that shows bus locations in real time. An example of the last of these exists in Waterloo Region: Grand River Transit releases data from vehicle location systems to the public, and its EasyGO app harnesses that data to show how close a bus is to any given stop.

“Data is most useful when it’s accessed to solve economic issues, or social issues,” says Kevin Tuer, managing director of Canada’s Open Data Exchange. “With the notion of smart cities at top of mind, we’re going to see a convergence with open data as a strategy to increase the quality of life.”

Leading jurisdictions, such as Edmonton — which has held first place on the Open Cities Index for three years running — rank highly for their easy-to-use platform and dedication to meaningful impact. For example, municipal staff in the Alberta capital use the city data platform to circumvent internal wait times when requesting information between departments, and a real estate company uses the portal to share community information with potential buyers.

Tuer says ventures that improve a service or help to generate revenue are on the rise. “Open government is important. It gives the public insight on how the municipality runs. But that takes time, effort, and resources,” he says. “Today there’s an appetite for better outcomes from the investment governments put into open data initiatives, to show there is potential for return.” 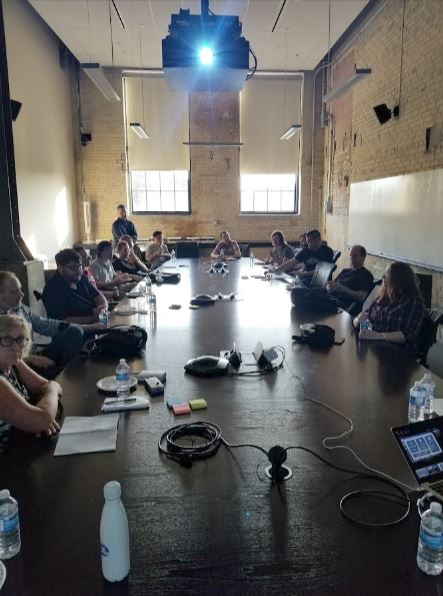 Right now, the effort of demonstrating that potential often falls on the citizen.

“Some municipal governments are open by default. They need to make a case to keep data private,” says Kristina Taylor, co-founder at Civic Tech Waterloo Region, a meet-up group that uses technology to solve community issues. But when it comes to the local governments of Waterloo Region, she says, “If data isn’t available, citizens need to submit a request, and that needs to go through a vetting process … City staff members aren’t under marching orders to catalogue and release municipal data by default.” That poses a challenge for creative projects involving municipal data, because anyone looking to initiate one can encounter a few extra steps in requesting and waiting for the necessary information.

With or without a perfect open data portal, citizens have still managed to find some ways to use the regional portals available to them — for example, a group of local high school students mapped all of Waterloo’s 30,000 trees during a hackathon in 2015.

All of Waterloo Region’s open data portals are still in their infancy.  While they've made some progress on transparency, there is much work to do when it comes to impacting civic life. Jaworsky pointed to a pilot project for water meter monitoring, in which the meter data automatically pours into the city for easier water consumption analysis. The project — which the city categorizes among its “Smart City” initiatives — could be a first step toward making a measurable impact with data, instead of just releasing it.

Of course, changing a longstanding municipal process takes considerable staffing and resource commitments. Taylor, whose day job is at TextNow — a cloud-based phone company in Waterloo — says the private sector has the advantage when it comes to investing whatever it takes to create a high-performing open data initiative. If, for example, a startup can envision a core function or means of generating income that involves using open data (whether municipal data or something else), it’s a safe bet that the startup will assemble a talented team dedicated to the successful use of that data.

Taylor suggests Waterloo Region’s booming tech community, which arguably has all the skills and interests needed to initiate leading open government initiatives, is simply occupied with other things. “Everyone has their own project on the go,” she says. “There are a handful of companies focused on open data in the region, but civic engagement doesn’t pay the bills.”

Tuer says the city can expect private companies to use swathes of municipal data for creative projects eventually. Meanwhile the federal government has put $75 million up for grabs in the Smart Cities Challenge, a competition that will award funds to projects that use information technology to improve life in Canadian municipalities and First Nations. The financial incentive might be what the governments of Waterloo Region need to move forward with open data.

Opinion
What do Ontario Liberals have to offer on housing?
OPINION: With the election more than a year away, it’s not realistic to expect them to have all the details. But there are some big questions they’ll need to answer.
John Michael McGrath

Politics
Is Democracy In Need of A Serious Shake-Up?