Why is Canada the only G8 country prohibiting the sale of raw milk?

By Liane Kotler - Published on Mar 04, 2016
The Ontario Milk Act prohibits the sale of raw milk, though farmers are allowed to consume milk produced on their own farms.

Of all the G8 countries, Canada is the only one to ban the production for sale, transportation and consumption of raw milk: milk that is unpasteurized. Raw milk can contain dangerous and sometimes deadly pathogens.

In Ontario, the Milk Act has prohibited the sale of raw milk for over 26 years, though farmers are allowed to consume their own if it’s produced on their farms. Dairy farmer and raw milk advocate Michael Schmidt of Glencolton Farms, an hour’s drive south of Owen Sound, provides raw milk to over 100 consumers through a farm-share program — a means for raw milk proponents to skirt the law by owning part of the farm or the cow that produces the milk.  Championing the sale of raw milk has cost Schmidt; his farm has been raided three times in the past 22 years by the Ministries of Agriculture, Natural Resources, and Finance and local and provincial police.

Shifts in food culture such as locavorism, the 100 Mile Diet, Food Freedom and gut health science have spawned a growing market for raw milk — not just for Schmidt but around the world. Many proponents do not believe that raw milk produced in sanitary conditions contains dangerous pathogens and many believe consuming it has beneficial effects on their health.

Anyone here in Ontario who drinks raw milk is taking a calculated risk, because the Ontario market is underground and unregulated.  Art Hill, a food science professor at the University of Guelph, assesses these risks.

Prof. Jeffrey Farber at the University of Guelph believes in enforcing stringent food safety regulations.  The dangers of unpasteurized milk, he says, far outweigh any benefits that ingesting this product could provide.

Because raw milk is illegal in Canada, data for food-borne illness specific to raw milk is not tracked. By contrast, in the United States from 2007 to 2012 there were 81 outbreaks of food-borne illness attributed to raw milk with no deaths reported. Here in Canada, a 2008 listeriosis outbreak linked to processed meats at a Maple Leaf Foods plant in Ontario caused 22 deaths and 57 confirmed cases across the country in total.

On January 26, Schmidt was notified that he is again in violation of the Milk Act. This time, the province hopes to close the farm-share loophole by including fractional owners. Schmidt’s hearing is set to take place in a Newmarket court on March 16.

On March 16, demonstrators gathered outside a Newmarket courthouse to protest the illegality of raw milk as Michael Schmidt arrived for his latest court hearing. Also there to greet Schmidt was May, a four-year-old Guernsey cow brought in by a local dairy farmer and raw milk supporter. May provided the crowd of over 200 with the showmanship they have grown accustomed to seeing from Schmidt in his over two decade legal battle with the province of Ontario.

May’s owner, Paul Nobel of Elbon Shady Haven Farm near Kenilworth, Ont., milked her and offered people in the crowd raw milk to drink. Others brought glass jars of their own and served it with cookies to demonstrate their disagreement with the government’s stance that raw milk is harmful and should remain illegal to sell and distribute for consumption. Inside the courthouse, at the hearing, Justice Mary Vallee set court dates of September 26 and 27. That’s when the province will try to prove that Schmidt is operating a dairy processing plant without a licence to supply herd-share members with raw milk. 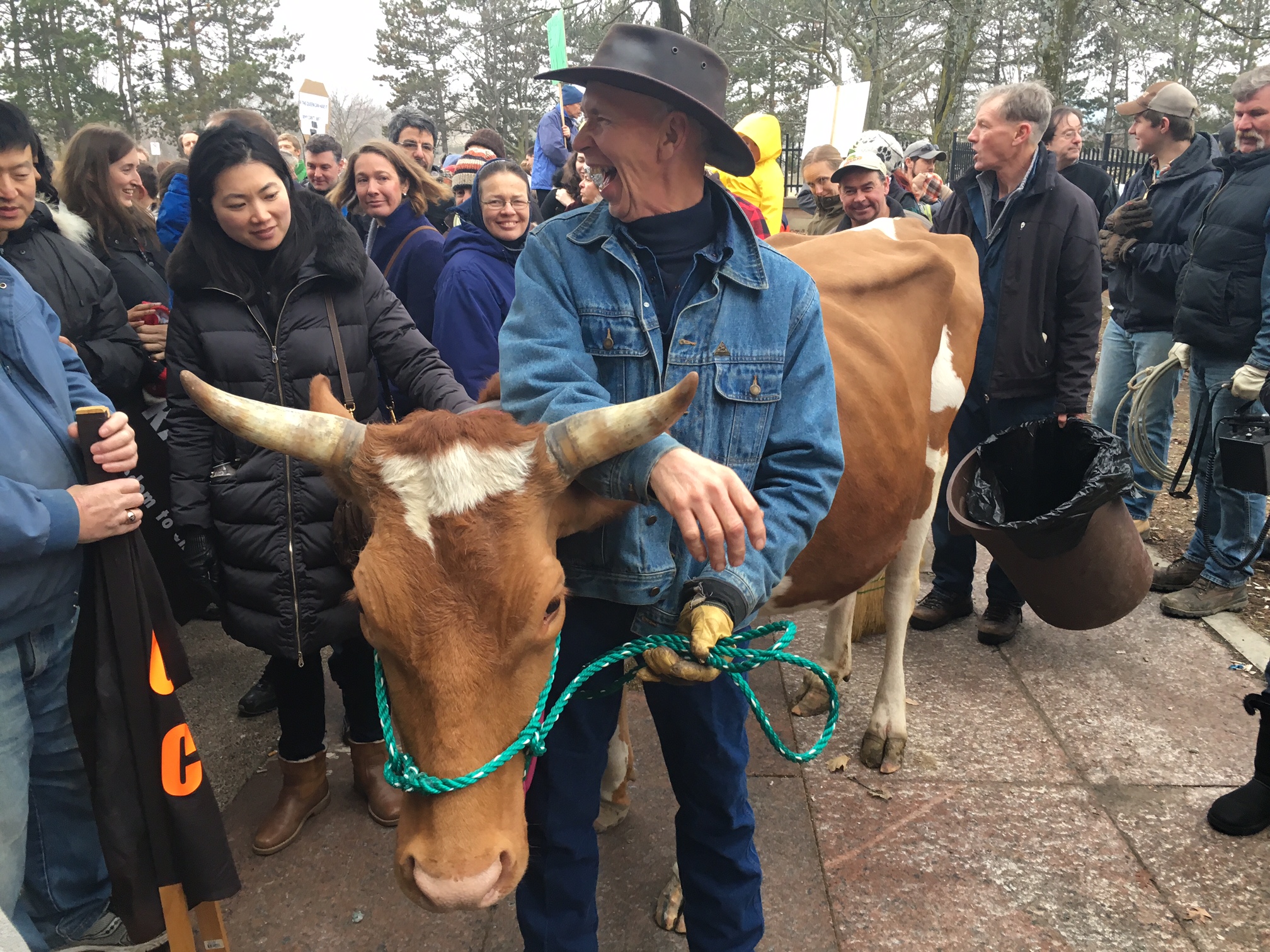