ST. JOSEPH ISLAND — Colleen Stadnyk felt helpless as she looked out her window at her family sugar bush. The crunching and snapping of branches and the thuds of falling trees had kept her up all night. “What a sound you could hear — it was just horrible,” says Colleen, who, together with her husband, Dave, runs Fairisle Maple Products, a syrup-production outfit, on their 100-acre property. The sugar maples, already soaked in freezing rain, leaned toward the ground as if wilting.

It was New Year’s Eve, and a snow-and-ice storm had hit Sault Ste. Marie and the surrounding area, causing widespread power outages and damage. Among the most deeply affected were the maple-syrup producers of St. Joseph Island, whose operations were nearly destroyed by the barrage of freezing rain and wet snow that persisted until January 3. “I haven’t slept all week. It’s terrible: you put so much work into it. It’s such a beautiful thing. It’s just heart-wrenching,” says Colleen a few days after.

St. Joseph Island, located on Lake Huron about 45 kilometres southeast of Sault Ste. Marie, is the province’s leading regional producer of maple syrup. It is estimated to have between 5 and 10 per cent of Ontario’s taps and is the country’s largest producer outside Quebec, which lays claim to 90 per cent of the national output. Maple trees abound on the 365-square-kilometre island, and a combination of historically cold winters and the island’s limestone base, which gives the soil an alkaline quality, has allowed the sugar bush to thrive.

But research suggests that climate change, and the severe weather it brings, poses a threat to the future of the island’s main industry.

Joshua Rapp, an ecologist who works at Harvard University’s Harvard Forest, says that unpredictable weather events are one factor that is reducing the trees’ yields in North America. Syrup requires a consistent freeze-thaw cycle, he explains. “If you get periods of warmth and then return to [cooler] periods of likely good sap flow, [the syrup] may clog during those warming periods,” says Rapp. While his work focuses on the United States and Quebec, he says his findings also apply to Ontario.

On St. Joseph Island, Dave has noticed that tapping season is coming earlier each year and that winter temperatures are fluctuating more wildly. John Williams, executive director at the Ontario Maple Syrup Producers’ Association, says that he’s heard similar reports from others: “Most producers believe there has been climate change at play: our weather patterns are less stable and predictable, and we are tapping earlier.”

While improved technology has offset most of the losses, Williams says, the ideal climate zone for sugar maples is moving northward, and that could adversely affect syrup yields. “Of course, these effects are not spread evenly over maple-production areas,” he notes. “Some places may experience extreme events, like St. Joe’s did.”

On St. Joseph Island, there are about 30 maple-syrup producers; the Gilbertson’s Maple Products, which boasts 40,000 taps and dates back to 1936, is the largest and the oldest. Kyle Gilbertson, who helps run the family business, says that he’s never seen a storm on the island like the one that struck on December 31. “Thankfully … the weather knocked most of that ice off the trees,” he explains. “It still ended up causing a good amount of branches and some trees to fall down, which means more maintenance work in the sugar bush. It could have been much worse than it was if the weather hadn’t co-operated near the end there.”

Gilbertson does acknowledge, though, that the scale of his operation makes it easier to deal with the fallout from storms.

On Dave and Colleen’s syrup farm, the elaborate web of lines that collect sap is in disarray. The lines are supposed to be taut and above the snow, but some have been pulled under it by branches, and others have been completely torn off. In total, there are 32 miles of tubing to check. Colleen says that the work has set Fairisle Maple Products back weeks, just a month before the sap season.

Dave says he’s overwhelmed by all that needs to be done. Immediately after the storm, he had to check the building in which syrup is boiled: because of the fallen trees and wet snow and ice, it took him five hours to snowshoe to the back of the property — a walk that usually takes a fraction of that time. To check the tubing, he’ll use a vacuum pump to blow air through it: when he hears a whistling noise, he knows there’s a hole. “There’s a lot of walking,” Dave says. “And every line is going to get walked through and pulled out and straightened and checked to make sure it’s okay.”

The 2019 year-end storm won’t affect the production of syrup, but another weather event like it could end their season. As Dave works outside, Colleen chokes up for a moment. “He works really hard at it,” she says. “He does it himself. He just got the bush cleaned up, ready to go, and then,” she stops mid-sentence and points outside. “We’re not young spring chickens,” she adds, noting that she and her husband are both in their 60s.

The Stadnyks, who boil their syrup on a wood stove, still manage to find some time to laugh. They joke that they won’t have to buy any cords of lumber to process the sap this year — maybe not even next year — thanks to all the felled trees.

Dave acknowledges that syrup production comes with a certain level of inherent risk. “I’ve got roughly 6,200 taps, so you want 6,200 litres — but mother nature isn't predictable.” 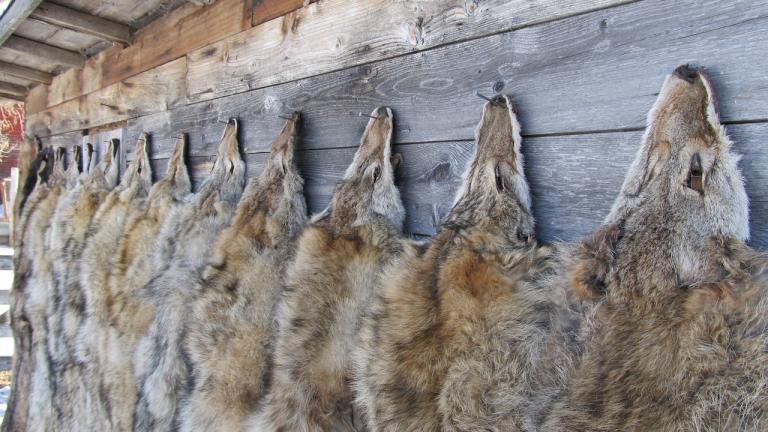