Why Bill Davis’s legacy outlives his political career in Ontario

Let's just consider the man’s achievements off the top.

Four consecutive election victories, which no one had done since before the First World War.

At 14 years, he's the second longest serving premier of Ontario, behind only Oliver Mowat.

As education minister for nearly a decade in the 1960s, he's the father of the community college system, five universities, TVO, and the Ontario Institute for Studies in Education.

He was an indispensable player, along with the current prime minister's father, in the 1981 repatriation of our Constitution with an accompanying Charter of Rights and Freedoms.

He did a ton of controversial things such as extending full public funding to the Roman Catholic school system, buying 25 per cent of the oil company Suncor, creating the rent review system, making the decision to build the SkyDome in downtown Toronto, and cancelling the Spadina Expressway. He was also a conservative who never balanced a budget.

He appointed the first female cabinet minister in Ontario history,  Margaret Birch (who's still a force of nature at age 95).

He was the North American Transit Man of the Year for championing public transit.

He led a minority parliament for six years (1975-81) by practising the politics of inclusion rather than the politics of personal destruction. In fact, one of his best friends in those legislative assemblies was the NDP leader, Stephen Lewis. That kind of working together across the aisle today is virtually unimaginable.

Beyond all that, he had one of the most capable and loyal cabinets in Ontario history, featuring the likes of Roy McMurtry, Frank Miller, Larry Grossman, Darcy McKeough, Dennis Timbrell and Bette Stephenson. And two future PC premiers  ̶  Mike Harris and Ernie Eves  ̶  both first got elected as “Bill Davis Tories” in 1981. 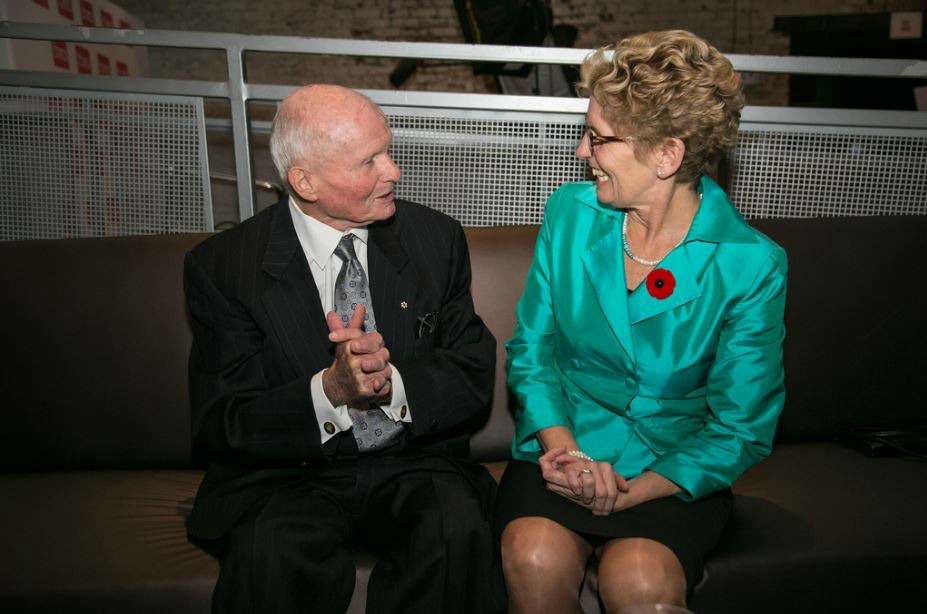 For all those reasons and more, I've wanted to write a biography of Ontario's 18th premier for more than a decade. But for years, Bill Davis always rejected my entreaties.

Davis won his first election when Leslie Frost was premier  ̶  June 11, 1959. And he is still deeply involved in politics, regularly in conversation with the current premier (Kathleen Wynne, whose high school graduation diploma he signed as minister of education), the current mayor of Toronto (John Tory, who was his principal secretary more than three decades ago), and the mayor of Brampton (Linda Jeffrey, whom he urged to run for that office, and has occasionally advised and fought with over transit plans in the Flower City).

It's precisely that record, plus his vast institutional knowledge of politics, that has interested me in Davis's story, ever since I first covered his government's exploits in the early 1980s. But whenever I suggested to him that he ought to have someone write his story, he always rejected the idea.

Part of it was Davis's own modesty, which his parents drummed into him from his earliest days. Part of it was not having the massive ego that leads many politicians to believe the world just can't wait for another political biography. Part of it was that he was never one to make big decisions quickly.

But over the years, and assisted by some of his closest friends and advisors, I've tried to make the case that Davis had a duty to history and future generations to share his views about that quarter-century in which he dominated politics in this province as few ever have. Finally, two years ago, he succumbed. And not only that: he said I could have access to all his personal papers in the Ontario Archives and write whatever I wanted. As much as he no doubt has wanted to know what I was writing about him and influence it as much as possible, Davis has co-operated with my book-writing efforts, but that's all.

He sat down for numerous interviews at his home in Brampton, in downtown Toronto, at his glorious Georgian Bay cottage, and at his modest condominium in Florida. I think he has revealed more about his public and private lives for this book than ever before, which is saying something because he has been a notoriously closed book about so much of his life before this. For example, Davis's first wife died at 31, leaving him a widower with four children. He has never publicly discussed this part of his life in any significant detail before now.

Davis has not seen the manuscript, which I just sent to Dundurn Press. He has called me a few times over the last few months to express his interest and/or concern about what I might be writing. But he has resisted the temptation to ask me to see what I've written, not that it would have done any good anyway. I wouldn't have showed it to him. And he understands that the finished product will have more authority and integrity if the reader knows the subject hasn't been trying to overly influence it.

But I understand, even without asking him, why Davis hasn't pestered me more to see a copy of the book before it's published. Our conversations suggest he genuinely believes a fair treatment of his more than 25 years in politics, 14 of them as premier, will demonstrate that on balance he did a good job managing the affairs of Ontario Inc., while making some enormously hard calls along the way.

Davis only asked for two things at the outset of this project: “I'd like a chapter on my father and another on the Constitution. But it's your book. You write it as you see fit.”

Those conditions were easy to say yes to, because no book about the man would be complete without examining the influence of his father (who was his hero), nor the seminal role Davis played to bring prime minister Pierre Trudeau and seven reluctant premiers together on a constitutional deal. This book will break new ground on how that happened.

It took two years in my “spare” time to write this book on Bill Davis. But in effect, I've been writing it in my head ever since I met him more than three decades ago. I will confess I wish the premier had said yes sooner. On July 30, he will turn 87, and although he's in better shape lately than he has been in years, he's still in quite fragile condition. Every time I speak to him, I remind him, “Mr. Davis, we have a book launch in October. Please take care of yourself.”

I have only two hopes for this book. First, that it makes a small contribution to our better understanding this man and his times, which were enormously consequential for Ontario and for Canada. And second, that he stays healthy enough to allow him to attend that book launch in October. Something tells me it's gonna be one helluva party for one of this country's truly admired and respected ex-premiers.

Coronavirus
COVID-19: What you need to know for February 24
TVO.org staff
sfy39587stp16