When the Spanish flu came to Ontario

A century ago, the virus infected hundreds of thousands of Ontarians, spreading fear and panic throughout the province
By Jamie Bradburn - Published on Feb 15, 2018
In Ontario, 300,000 cases and 8,705 deaths were recorded. (Toronto General Hospital, 1913. City of Toronto Archives.)

​This year’s wave of influenza is one of the worst in recent memory, but its effects have been minuscule compared with those of the global pandemic that struck a century ago. The numbers associated with the Spanish flu of 1918 to 1919 are staggering. Worldwide, that flu, which was related to the H1N1 virus, is estimated to have claimed the lives of up to 100 million people. In Canada, which then had a population of 8 million, as many as 50,000 died. In Ontario, 300,000 cases and 8,705 deaths were recorded. But these figures likely don’t tell the whole story: medical systems were overwhelmed, meaning that many fatalities almost certainly went unreported.

We now tend to think of the young and the elderly as being most at risk, but most of those who died during the Spanish flu epidemic were between the ages of 20 and 40 — the same demographic already decimated by the First World War. Symptoms could turn dangerous within 24 hours. As Isra Levy of the Canadian Medical Association noted nearly a century later, the strain “seemed to cause a massive immune reaction that led to respiratory distress in previously healthy people. Many of them succumbed to hemorrhagic pulmonary oedema [bloody fluid in the lungs].”

Various factors made it easy for the virus to spread in Ontario during the fall of 1918. The war effort had depleted medical and nursing staff across the province. Heating coal was scarce, which was a problem in areas where September had been cold and damp. And returning troops brought with them more than horror stories of European battlefields and trench warfare — they also brought back the flu.

During the early days of the pandemic, authorities focused on averting a public panic. On September 30, the provincial board of health declared that the flu was less dangerous than measles or scarlet fever. The public was advised to avoid crowded streetcars, large gatherings, and anyone showing symptoms. “It is advisable to eat moderately, take plenty of outdoor exercise, sleep with windows open, drink lots of good water, and do not get excited about newspaper reports.” As infections reached the thousands, Provincial Officer of Health J.W. McCulloch issued a statement on October 7 in which he urged local health officers not to “dislocate business or ordinary affairs of life,” as shutting down stores and institutions were “ill-advised measures which only serve to irritate the public and accomplish no useful purpose.”

Events in Brantford illustrate the tensions at play. Local board of health chairman T.J. Minnes gathered his own statistics, the Globe reported, “in order to set at ease the minds of citizens and protect the good name this city had enjoyed as being a healthy place of abode.” On October 8, he declared that the flu was not present in the city, dismissing 795 cases of “grippe” as non-critical, and describing the large number of school absences as precautionary. Brantford General Hospital, though, was so overwhelmed it was turning away patients, and at least one doctor died. A week later, there were 2,500 cases of flu in Brantford: 10 people died in a single day. While an emergency hospital site was prepared, Medical Officer of Health F.G. Pearson found many of his efforts were, as the Globe put it, “pooh-poohed” by Minnes. In face of such obstruction, Pearson resigned.

Others, though, like G.R. Cruickshank, Windsor’s medical officer of health, condemned a business-as-usual approach in no uncertain terms, likening sick people who went out in public to Canada’s wartime enemy. “Anyone who goes into a crowded streetcar and coughs is worse than the German Kaiser,” he told the local chamber of commerce. “Any child that goes to school is worse than any German atrocity.”

Municipalities soon enforced stronger control measures. The following order, issued by Hamilton’s board of health on October 16, was typical of the actions taken across the province to prevent flu from spreading:

All schools, seminaries, Sunday schools, dance halls, billiard and pool rooms, bowling alleys, theatres (music or concerts), halls – public or places or amusement, places for public gatherings and amusement are to be closed. Declared: All meetings or assemblies are prohibited, Public funerals prohibited, all utensils in boardhouses/restaurants must be immersed in boiling water for three minutes, no use of common towel/drinking vessels, only four passengers plus elevator operator, all gatherings essential for the war are excepted.

Such orders met with some resistance. The Reverend A.J. Fidler, the rector of St. Clement’s Church in Toronto, believed closing churches was unnecessary and un-Christian: people would be denied the opportunity to seek spiritual solace. Toronto Medical Officer of Health Charles Hastings, in response, said that people didn’t need to visit a church to be closer to God and that Fidler needed “a truer conception of God’s relationship to man and of man’s humanity to man.” When Kingston closed its theatres, the president of the Canadian Theatre Managers’ Association protested that actors would suffer — they weren’t, he claimed, known for saving their money.

As hospitals filled and overextended medical staff fell ill, women were asked to volunteer to care for patients. “They are not dying because we do not know about them,” Ottawa mayor Harold Fisher noted in an October 14 appeal. “We know where they are, but have nobody to send. Knitting socks for soldiers is very useful work but we are now asking the women of Ottawa to get into the trenches themselves.” Margaret Patterson prepared lectures on the treatment of influenza. She delivered them several times a day in a Queen’s Park committee room to the “Sisters of Service” (as the volunteer nurses were called), and they were printed in several newspapers. Organizations ranging from the Imperial Order Daughters of the Empire to local Conservative and Liberal clubs offered nursing training.

Nurses were forced to contend with the increasing paranoia of the public. “The houses in which they board are either asking them to move or making it decidedly uncomfortable for them to remain,” the Toronto World reported. Some landlords prevented them from making phone calls, even for more assistance or supplies, to avoid getting germs on telephones. When school boards strongly urged or downright told their female employees to volunteer, many women had to make difficult decisions. “One teacher,” the World noted, “is faced with the alternative of the board to nurse or resign, and at her boarding house has a choice of not nursing or moving.”

Schools and church basements became makeshift kitchens where volunteers prepared food baskets for home delivery. Private car owners were urged to lend their vehicles to those delivering food and other nursing services. Neighbourhood groups collected clean sheets and night clothing for those confined to bed.

The pandemic benefited producers of legitimate and quack remedies. Ads proclaimed the healing powers of everything from electric heaters to a “violet ray ozone generator.” A Toronto cough-syrup manufacturer reported that by mid-October, its production line was running 3,000 bottles short each day. Pharmacists could barely keep up with prescriptions. Members of the medical community and the public urged the government to ease the Ontario Temperance Act so that alcohol would be easier to access; some officials suggested that restrictions for “medicinal” liquor be relaxed to reduce the strain on sick customers obliged to line up at the few legal vendors, while pro-temperance forces condemned any attempt to increase the availability of demon booze. 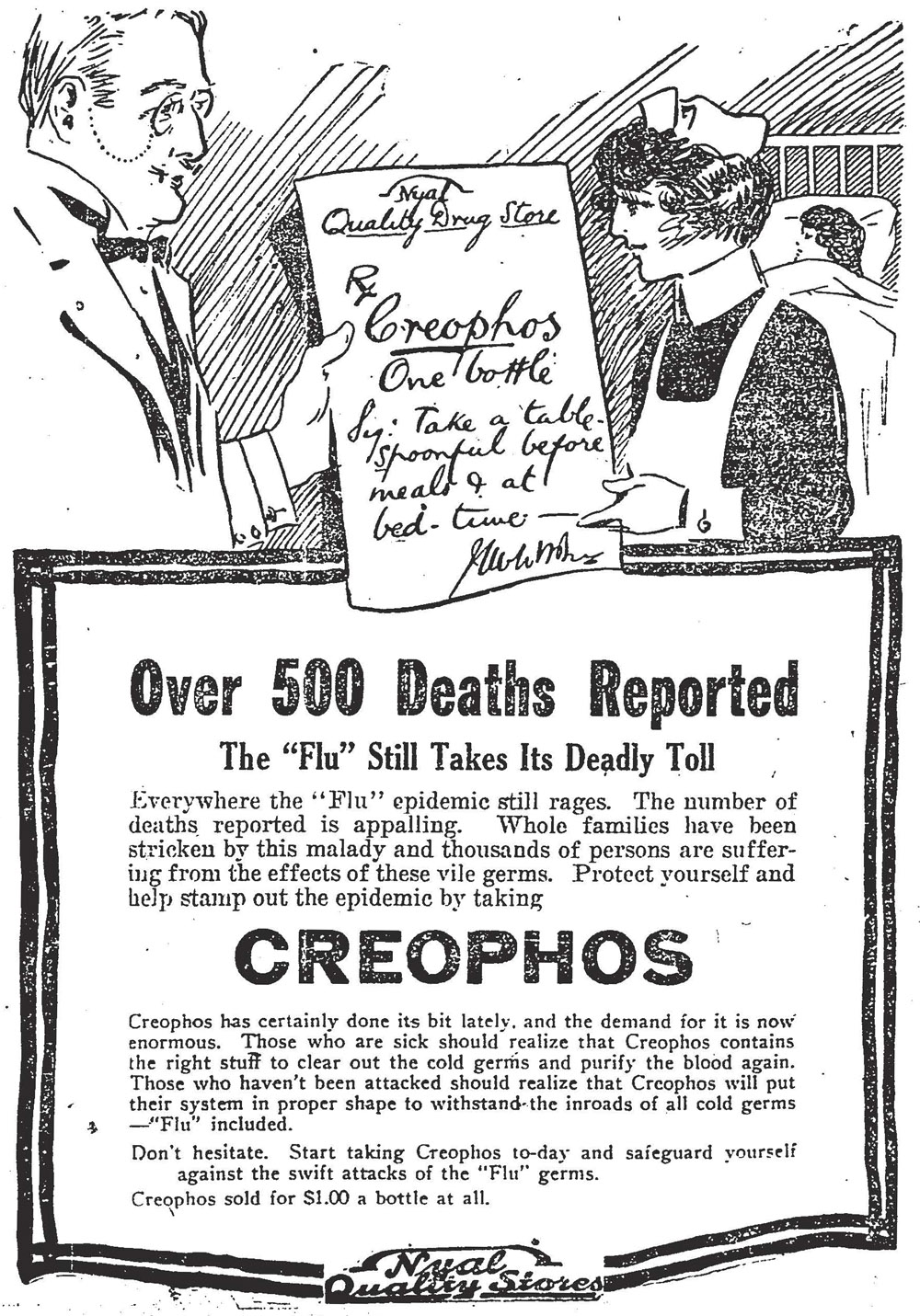 When not preaching against alcohol, newspapers urged readers to follow the advice of medical officers and enjoy as much fresh air and sunshine as possible. Walking to work was encouraged, while spitting on sidewalks was outlawed. The use of surgical masks was strongly recommended, although there were doubts about their effectiveness.

By the middle of November, many of the closing orders in southern Ontario had been reversed, though subsequent flare-ups in places like Hamilton did prompt new closures. Occasionally, newspapers reported “pathetic cases” of remote outbreaks in northern Ontario — First Nations people in the Chapleau area were forced to make long canoe trips to access treatment. Deer-hunting season was extended, and, because not all churches had reopened, Thanksgiving celebrations were delayed until December 1.

On November 11, though, it was impossible to convince Ontarians to stay home. Despite continued concerns about public gatherings, and pleas from politicians to wait until December, people all over the province took to the streets to celebrate the Allied victory and the end of the war.