What WWI can teach us about hoarding toilet paper

In 1918, the Canada Food Board declared that “patriotic Canadians will not hoard food” — and it rolled out new regulations to enforce that
By Jamie Bradburn - Published on Mar 20, 2020
Canada Food Board poster from 1918.

As Ontarians react to the run on toilet paper and other household items during the COVID-19 outbreak, a First World War propaganda poster on hoarding has resurfaced on the internet. It depicts a panicky-looking couple grasping bags of hoarded flour and sugar as a shadowy law-enforcement official passes their window. Produced for the Canada Food Board in 1918, it declares that “patriotic Canadians will not hoard food” — a message intended to reinforce policies that had been designed to prevent runs on critical food staples.

By 1917, with the war in its fourth year, the federal government was increasingly concerned that provinces would not produce enough food to meet their own needs, let alone those of the rest of the country or of troops in Europe. Home farming was encouraged; community groups, such as women’s institutions, provided canning demonstrations to promote food conservation. An anonymously produced booklet published to benefit returning soldiers, Win-the-War Suggestions and Recipes, stressed to housewives how important conservation and sacrifice were to the war effort: “Food must be conserved; the Government must have our money; women must sacrifice their vanity, their mean self-indulgence and criminal selfishness on the altar of the country’s safety.”

As grocery prices rose, some Canadians started to suspect that businessmen and farmers were engaging in war profiteering. The sense that any profit was being made outraged the country’s workers, who had been asked to make numerous sacrifices. The most infamous case involved Toronto-based meat-packing giant William Davies Company, whose head, Joseph Flavelle, was also in charge of the nation’s munitions contracts. After a federal investigation revealed that the company had made millions off sales of bacon and canned meat to Great Britain, the press depicted Flavelle as a greedy “baconeer.” A subsequent federal inquiry revealed only a slight profit margin on high sales volume, but meat-packer profits were restricted for the rest of the war.

During the summer of 1917, the federal government created the office of Food Controller to promote conservation and monitor food sales. Many of its early efforts appeared in local newspapers via “war menus” and a weekly column. Among the topics covered was hoarding. “Now storing and laying up a prudent supply for real needs is not a crime in peacetime,” a February 1918 column observed. “But the man or woman who willfully and coolly decides today to store more food than he or she would buy in ordinary times is committing something that has the moral effect of a crime.” Hoarding, readers were told, kept supplies from the poor, aggravated existing obstacles in food distribution, and allowed valuable food to rot. 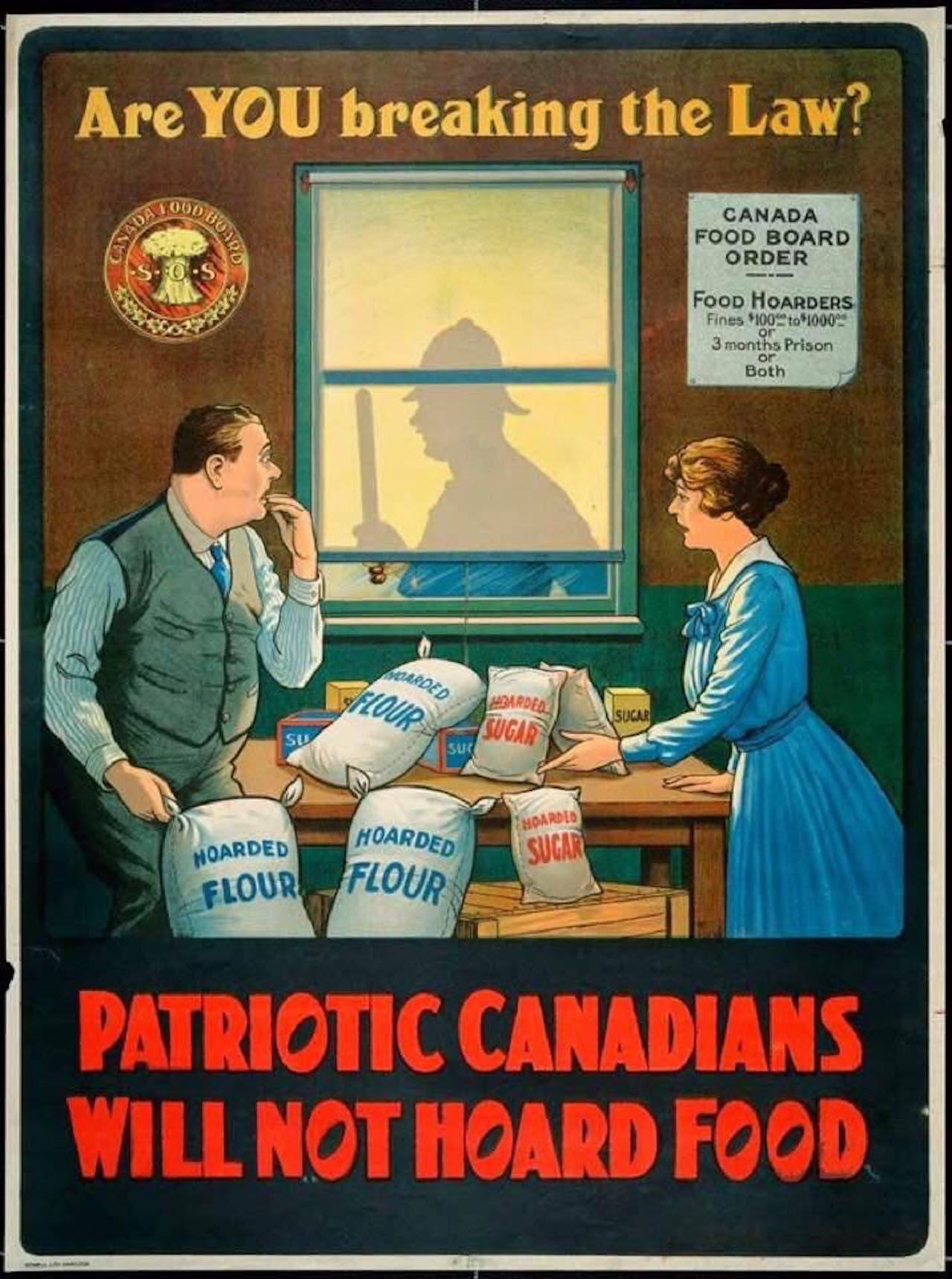 The Food Controller was soon rolled into a new government agency, the Canada Food Board, which imposed a licensing system that applied to the distribution of such items as butter, cheese, eggs, lard, and meat. After consultations with the food industry, it began rolling out anti-hoarding and anti-waste regulations in March 1918. Dealers and retailers were required to file monthly reports on their stock and sales volume. Limits were set on how much inventory they could carry — for example, a 15-day supply or eggs or a 30-day supply of cheese. Anyone believed to have excess food that was suitable for human consumption was required to sell it off immediately — if they didn’t, it could be seized by the government. Fines ranged from $100 to $1,000, or up to three months’ imprisonment. “Most people in this country realize that there is a great war waging and that people on whom the world depends are in danger of starvation,” a late April Food Controller column observed. “Some few apparently do not. This new law will do much to teach them.”

The regulations surrounding the supply and use of flour and sugar were complex and frequently adjusted. Personal limits depended on one’s proximity to a supplier. When the directive was given to millers to produce more flour per pound of wheat by using whole wheat or blending with other grains, fear grew that old stocks of white flour would be hoarded. Restrictions limited not only the quantities of sugar one could possess, but how it could be used. An order in late April 1918 decreed that “no persons shall make for private consumption French pastries, iced cakes or biscuits, or cakes with icing adding to the interior”; cane sugar could not used for home candy-making. Anyone with excess quantities of flour and sugar was asked to return it.

Community supervision of these policies was placed in the hands of a local food officer. In Toronto, the job went to Charles Hastings, the city’s medical officer of health. His initial inspections found little evidence of hoarding within the city. The health and street-cleaning departments worked together to monitor unusual amounts of food headed to dumps or to the city incinerator. Customers who displayed unusual purchasing habits in retailer reports could be subjected to home inspections and raids. Yet Hastings was measured in his initial response to the regulations. “A good deal of private hoarding is innocent, and is because people don’t understand,” he told the Globe. “When one household buys too much, then another household goes short.” By September, the Food Board had urged Hastings to undertake deeper investigations, as its records showed that sugar consumption had not decreased as desired. A sugar-ration-card system was proposed, but the outbreak of the “Spanish flu” meant that Hastings had more serious matters to contend with.

Community organizations voiced their support for the Food Board’s efforts. “If our people have the right spirit,” the Walkerville branch of the Imperial Order Daughters of the Empire observed, “they can do more without hardship.” Everyone from advice columnists to the wives of federal cabinet ministers advised women to snitch on anyone they suspected was a hoarder. Many housewives complained that sugar rations were so low that they were unable to make their war-effort-friendly preserves; food retailers felt that the press made them into scapegoats for food waste, despite the fact that few charges were laid. There were also some financial losses: apple dealers in Ottawa, for example, were forced to sell off half the city’s existing supply in March 1918.

One of the heftiest penalties was doled out to Robert Wright of Niagara Falls, who was sentenced to two and a half years' imprisonment for possessing eight sacks of flour and 52 cases of pork and beans. In Toronto, an inspection of Joseph Levinsky’s house found nearly 200 pounds of sugar: he claimed he had bought it before regulations went into effect and that his wife would have used it for preserving if she hadn’t been hospitalized. He was penalized $100.

Restrictions were lifted in the months following the end of war. The Second World War saw the introduction of a rationing program that involved the issuing of ration coupon books: penalties for hoarding included up to two years’ imprisonment. Toilet paper, though, was not among the items subject to restrictive purchasing.

Coronavirus
COVID-19: What you need to know for January 26