LONDON — When Covent Garden Market opens its farmers’ market this weekend, there won’t be any of the usual live music, kids activities, food sampling, or crafts. There won’t be any tables set up around the public square for socializing. And, for the first time this century, Lorraine Lynch and her maple-butter and sugar leaves won’t be in attendance.

The 83-year-old says she thought it would be too risky to come in from her farm west of London for the opening. With emergency COVID-19 prevention measures beginning to be lifted, she’s anticipating another surge of cases: “Well, I don’t want it,” she says.

“Will we have all our farmers? Absolutely not,” says Bob Usher, manager of the city-owned public-market facility that hosts Covent Garden. About 10 vendors will turn out, he says, down from the 30 to 50 who would have been there on a typical pre-pandemic market day. “Some of them are not sure whether they’re planting or what they’re going to do,” he says. “And some of them are waiting to see how things go.”

The Covent Garden Market is one of 180 farmers’ markets across the province trying to set a course for the summer season as Ontario begins the first stage of reopening its economy — but choosing a direction has been tricky. On March 23, the province included farmers’ markets in its list of essential services that could remain open during the pandemic emergency measures; it then dropped them when the list was narrowed on April 3. Shortly after, it confirmed to Farmers Markets Ontario that markets could open, says Philip Powell, a spokesperson for the organization, who added that the permission came with a caveat: “They had to follow public-health policies and work with their public-health units and their landlords, which in many cases are municipalities.” For some markets owned by municipalities, such as those in Kitchener and Cambridge, that meant having to close until further notice. Others delayed opening — in the case of Covent Garden’s Saturday market, by about three weeks.

After the municipality of Bluewater, on the week of March 13, closed the public park that the Bayfield Farmers’ Market uses in the Lake Huron shoreline town of the same name, “We thought, well, we might not be able to open, because we don’t have a place,” says Mary Brown, who manages the market. Three weeks ago, municipal officials relented and allowed the farmer-run non-profit to operate an online pre-order/curbside-pickup market model in the street next to the park. The model is one of two operation-safety protocols that Farmers Market Ontario and public-health officials have developed; the other requires distancing strategies similar to those used in grocery stores.

Provincially mandated safety protocols have meant new purchases. Bayfield, for example, is buying supplies such as plastic bags, masks, gloves, and hand sanitizer. “We are fortunate,” Brown says. “We have a bank balance on the positive side.” (It’ll be waiving its weekly $17.50 stall fee for vendors this season.) Steve Green, who manages the Downtown Windsor Farmers Market, anticipates added costs not only for sanitation but also for extra equipment, such as hand-washing stations and barricades for crowd control. The market is also looking into using an e-marketing platform. It will add “more than one chunk of $10,000, I suspect,” he says. “Everyone will have additional costs — even the vendors.”

Some farmers have developed new ways to connect with customers. The Chesney family, which farms 500 acres of fruit and vegetables near Woodstock, sells at 10 farmers markets from Toronto to London, including Covent Garden — the revenue, Alex Chesney, says, represents about a third of the farm’s annual sales. After hearing of opening delays and closures until further notice, they launched a market-box home-delivery service for about 200 customers within the catchment areas of their regular markets. “We just finished our first week of deliveries last week,” she says. “And it went really well.”

Bradley Rickard, an economics professor at Cornell University, says there’s a good chance that farmers’ markets and forms of farm-direct marketing, such as community-supported agriculture — through which buyers pay in regular instalments to receive weekly deliveries of fresh produce — will have a solid year.

Rickard, who recently co-authored an analysis of the impacts of the COVID-19 pandemic on Canada’s fresh-produce market, says he’s been hearing accounts of rising interest in locally grown fresh-food products on both sides of the border. “There’s some indication that people are just buying more,” he says. “Food service has gone way, way down, and people are buying more food. They’re being more conscientious of what they buy, they’re planning more meals, and they’re cooking more meals at home.”

Green, now in his 10th year running the market in Windsor, says that, when he announced on social media that the market would open on May 30, the response was like nothing he’d ever seen. “There were already 10,000 views and thousands of interactions and hundreds of shares” on social media within two days, he says. Usher says that at least a quarter of the calls Covent Garden has received of late have been inquiries about the market’s opening — a volume he’s never seen before.

While Usher predicts that Covent Garden’s pared-down appearance will disappoint some customers on Saturday, he notes that all organizers can do is try to adapt: “We are certainly willing to change the way we do our business and how do we do it, and we’ll see how it evolves — and we hope to stay ahead of the curve and evolve with it.”

Education
How universities sprang into action in a COVID-19 world
Some Ontario universities managed to do in one weekend what might otherwise have taken a decade to accomplish — going almost entirely virtual.
Steve Paikin
Coronavirus
Has COVID-19 Changed How We Shop for Food? 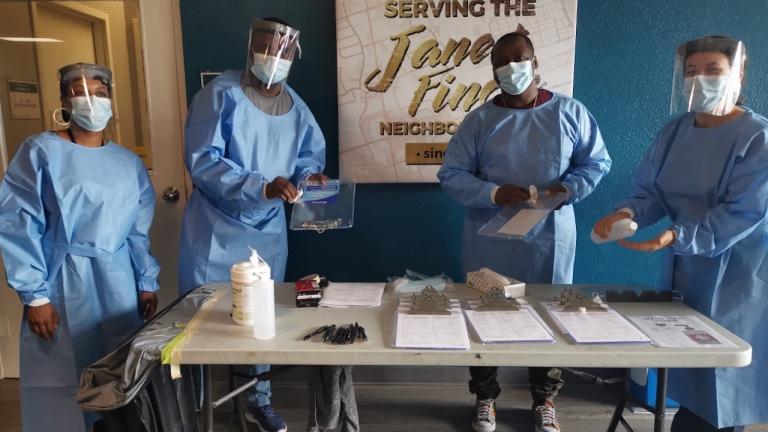 Coronavirus
What does a community approach to COVID-19 testing look like?
Priya Iyer
sfy39587stp16