What California can teach the GTA about urban density

OPINION: A new Fraser Institute report says Canadian cities have plenty of room for densification. A proposed bill south of the border could show us how to get it done, writes John Michael McGrath
By John Michael McGrath - Published on Jan 12, 2018
Toronto, at just 4,457 people per square kilometre, isn’t even as dense as Queens or the Bronx. (Chris Hepburn/iStock)

​Judging by the newspaper editorials and the complaints from some vocal city councillors, anyone could be forgiven for thinking that our provincial capital is rapidly being converted from a modest city of lowrise neighbourhoods into a forest of towers. Toronto, the received wisdom goes, is rapidly turning into one of the densest cities on Earth, and the city’s transit infrastructure simply can’t keep up with demand.

But, to slightly misquote Luke Skywalker, nearly every word of that is wrong: Toronto remains firmly in the middle tier of major cities as far as population density goes, with most of the city’s growth concentrated in its walkable downtown core. The city’s transit infrastructure, meanwhile, has been languishing for generations thanks to the inaction of our political class at both City Hall and Queen’s Park: the TTC hasn’t built a subway to serve the city’s downtown in more than a half a century, consistently preferring to concentrate on costly suburban expansions like the most recent one to Vaughan in York Region, or the Scarborough subway extension.

A new report from the Fraser Institute on the density of Canadian cities says that there’s plenty of room for them to densify without sacrificing quality of life. Indeed, the assumption that living more densely must, in all places, mean a lower standard of living is an error according to Fraser: the report’s author, Josef Filipowicz, found no statistically significant correlation — positive or negative — between density and quality of life.

As for Toronto, nobody will be surprised to learn that the central city of the Greater Golden Horseshoe isn’t as dense as global financial hubs like London or New York City. But Toronto, at just under 4,457 people per square kilometre, isn’t even as dense as Queens (8,282) or the Bronx (13,366), much less the denser parts of New York like Brooklyn or Manhattan. (Even the denser areas that formed pre-amalgamation Toronto boast only 6,962.) In other words, there’s still plenty of room for Toronto (and other cities in the region) to grow without needing to resort to greenfield sprawl.

The question of how to do so affordably is where these kinds of discussions usually break down, and that’s why it’s worth looking at a recent proposal from California. State Senator Scott Wiener has proposed a bill that would override local zoning rules in areas within reasonable distances of decent transit service. Under the bill, instead of having to go through the cumbersome process of negotiating permissions with local cities to approve tall-ish “midrise” buildings in exactly the places where new homes would create the lowest environmental impact, developers would simply be allowed to build them as of right.

Ontario, like California, is also nominally committed to putting new housing close to transit service. Like California, Ontario also has a housing crunch on its hands. But the contrast between Wiener’s bill (which is ambitious enough that it may well fail to pass) and Ontario’s recent changes to planning policy is hard to ignore. Faced with many of the same problems, Ontario has gone in the opposite direction from what Wiener is proposing.

While Wiener’s bill assigns responsibility for California’s housing crisis to ponderous local approvals, Ontario just gave the province’s largest municipalities more power to delay and deny new housing permits. The government didn’t call it that, exactly, but that’s what Bill 139, the Building Better Communities and Conserving Watersheds Act did by weakening the Ontario Municipal Board. Timelines for appeals were lengthened, and rules were changed to give the opinions of municipal councils more weight in approvals. The new Local Planning Appeal Tribunal, which has replaced the OMB, may still override recalcitrant councils in some cases, but the legislation was structured so as to emphasize local decision-making.

Offsetting that choice somewhat, Bill 139 did include language that will encourage more density around transit service, but limited it to “higher-order transit,” defined as anything in its own right-of-way, with its own reserved space in (or under) the street. Light rail planned for cities like Ottawa, Mississauga, and Hamilton will qualify, as will the proposed bus rapid transit in London. But vast areas of Toronto (and most other Ontario cities) will be left untouched. 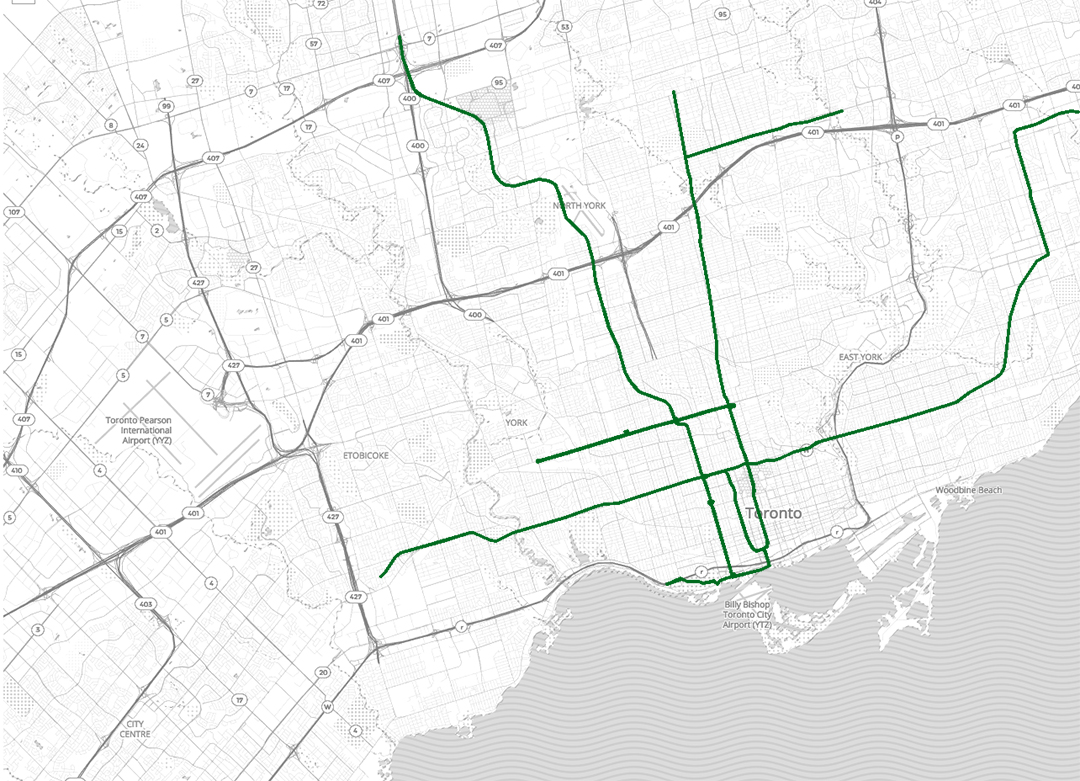 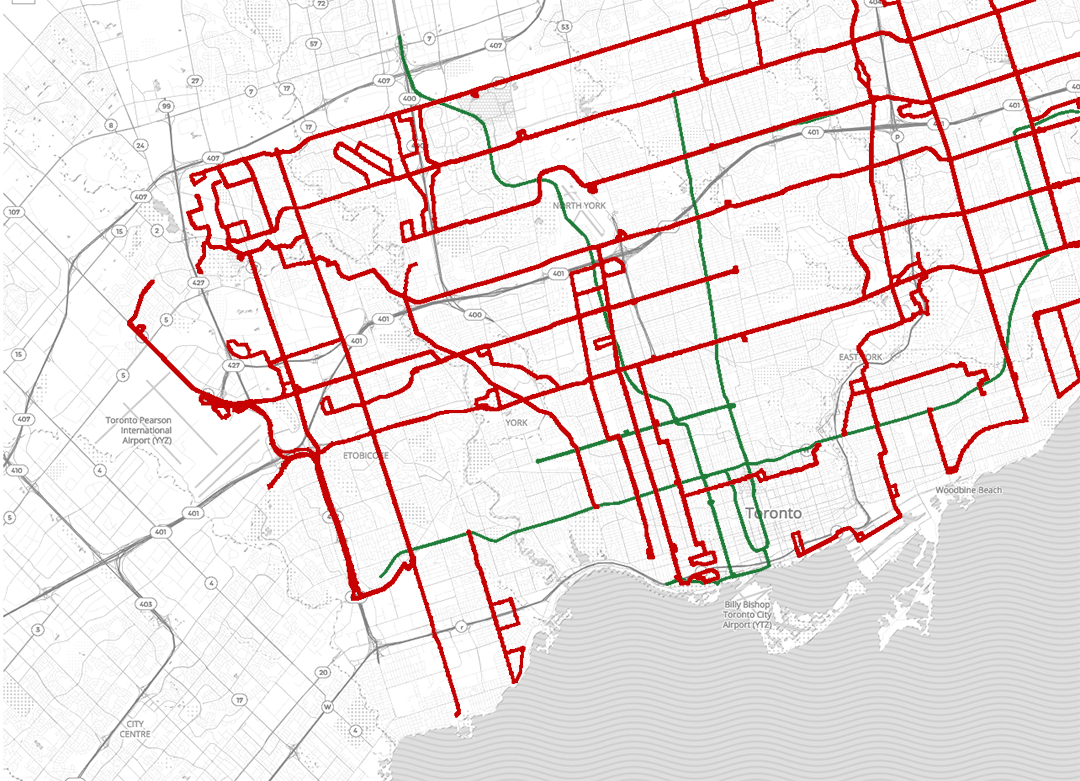 Treating frequent bus service like it’s serious transit opens up a much larger area of — and very different parts of — the city for intensification: instead of construction being clustered in a handful of areas, building permissions would be more spread out.

Although Bill 139 allows for more intensification around major transit stations, it leaves local municipalities in control, while Wiener’s SB 827 overrides them. There are two different philosophies on display: Bill 139 allows more density around transit, and provincial policy encourages it through other measures, but in the end it reinforces most of the local planning powers cities are used to; SB 827 prohibits cities from obstructing dense new construction, and grants broad building permissions in clear legal language.

It would be surprising indeed if SB 827 passed in its current form. It may simply fail, or pass in a form that’s so watered down it’s unrecognizable. But California has already seen major housing legislation pass in recent years, and Wiener’s bill won’t be the last serious attempt to address that state’s housing shortage. Prior laws that liberalized rules on other types of housing have already succeeded in creating more units than even proponents expected. Ontario should keep an eye on events in the Golden State — we might just learn something.

Correction: This article originally stated that Toronto's population density is just under 7,000 people per kilometre. In fact, the number is 4,457. TVO.org regrets the error.

Politics
The Tories want to deregulate intercity bus service. What comes next?
ANALYSIS: Bill 213 would dissolve the Ontario Highway Transport Board and end a century-old system of regulation. Here’s what that could mean for travel in and around the province.
John Michael McGrath