With the city already seeing subzero temperatures at night, there is a growing sense of urgency about how the city will help its homeless population — and where it will find the money
By Nick Dunne - Published on Oct 02, 2020
Christianne Blain and Ashley Mathews of Living Space conduct an outreach tour of downtown Timmins. (Nick Dunne)

TIMMINS—As Ryan awaits transitional housing, he’s spending his days behind Living Space, a Timmins service hub and shelter where he’s slept overnight for the past month. On this balmy late-September afternoon, he’s hunkered down under some water-meter piping, but he hopes to be in semi-permanent housing by the end of the week. He’s confident that stable accommodations will help him get an ID, a bank account, a job, and, eventually, a permanent place to live. “No matter what, I'm sure I'll be able to get it done, but it's been taking years,” he says. However, he can’t help but worry as winter approaches. “I am very concerned,” says Ryan, who asked that TVO.org use only his first name to protect his identity.

Ryan isn’t alone in his concern. The Cochrane District Social Services Administration Board, the regional body responsible for allocating provincial and federal money to local organizations, says that it is severely underfunded relative to other administration boards and that COVID-19 has wiped out its 2020 budget — even though it received $358,000 from the COVID-related Social Service Relief Fund, and there’s another $806,539 of SSRF funding coming “in the near future,” according to a spokesperson for the Ministry of Municipal Affairs and Housing. The Cochrane District board’s chief administrative officer, Brian Marks, says it won’t be enough: “We were already behind the eight ball, and then COVID hit.”

Living Space had partnered with the city to use the McIntyre Curling Club as an expanded, socially distanced shelter space. It housed an average of 40 to 50 people per night — 70, when it was at its busiest. But, due to funding, daytime drop-in services ended August 1, and overnight shelter space at the curling club ended August 31. Living Space’s main location has 28 emergency beds and 11 transitional rooms.

With Timmins already seeing subzero temperatures at night, there is a growing sense of urgency about how the city will help its homeless population — and Marks and others suggest that the province’s funding model for the Community Homelessness Prevention Initiative, or CHPI, is a big part of the problem.

How municipalities track homelessness varies, which means that drawing comparisons can be a challenge. “With any methods that we use it’s difficult, because hidden homelessness is so hidden in rural communities,” says Carol Kauppi, a Laurentian University professor who studies rural and northern homelessness. “But what we found in Cochrane is that the rate of homelessness is high. It's very high.” Marks says that Timmins has among the highest rates of homelessness in the province.

In the city of about 41,000, 741 people — or 1.8 per cent of the population — are absolutely homeless (on the street or living in shelter), hidden homeless (couch surfing, for example), or at risk of being homeless (living in substandard accommodations), according to a 2018 study from Kauppi. The larger Cochrane District has a population of around 78,000, of which 1,894, or 2.3 per cent (roughly one in 43 people), are experiencing homelessness or on the brink of it.

Yet provincial funding from the Community Homelessness Prevention Initiative, a program within the province’s Poverty Reduction Strategy intended to “support the province’s goal to end chronic homelessness by 2025,” according to the program’s guidelines, falls far below what other jurisdictions receive relative to their respective homeless and at-risk populations.

The Cochrane board received $1.3 million, or $686 per person affected, while the City of Greater Sudbury received $3,059,602 for its 2,178 homeless or at-risk individuals, or $1,404 per person. The Manitoulin-Sudbury District Social Services Administration Board received $766,183 for its population of 171 people, or $4,480 per person. All jurisdictions used the period prevalence count method, which surveys a homeless population over a period of time. “I was hesitant — and I remain hesitant — to provide a comparison to other service managers and DSSABs,” Marks says. “But the methodology for the CHPI allocation does not reflect need when considering absolute or hidden homelessness.”

A spokesperson for the Ministry of Municipal Affairs and Housing told TVO.org via email that “the province focuses on a needs-based approach to allocate CHPI funding. The province calculates allocations for Service Managers with a formula that uses evidence-based indicators to reflect relative need across Ontario, for both people experiencing homelessness and people at-risk of homelessness.”

The CHPI methodology uses several weighted factors to determine funding: 33.5 per cent is based on what share of the provincial total local low-income households make up, 33.5 per cent is derived from the area’s unemployed population as a percentage of the province’s total unemployed population, and the remaining 33 per cent considers the youth and Indigenous population in relation to the province’s total population. The ministry spokesperson also notes that other funding has been provided: Cochrane is receiving $367,046 under the provincial Home for Good program this year and will get $400,000 from the federal Reaching Home program.

But Marks says the CHPI criteria don’t take into account the actual population of homeless and at-risk people: “Considering income of households is not going to get Ontario to the goal of ending homelessness. Serving homeless people and coordinating supports and finding/creating housing will end homelessness, and with our current allocations — CHPI, Reaching Home, Home For Good — we don’t have what it takes.”

Kauppi says that the acute nature of Timmins’ social issues isn’t reflected in the funding it receives: “They are [more impacted], and, proportionately, they should be getting more funding from the government.” The solution, she adds, lies in housing availability: Finland, for example, has focused its efforts on building affordable homes to provide people with permanent shelter.  Without a focus on homebuilding, Kauppi says, “you’re just shuffling things around a little bit, getting some people housed — the most serious cases — but it’s not addressing the problem in a sustainable way.”

Because of its funding situation, Marks says, the CDSSAB has had to focus almost entirely on homelessness and food insecurity. That means that organizations dealing with violence against women, rent arrears, and eviction prevention will see CHPI funding cut by as much as half. “We reached out to all our service providers and let them know what the priorities had to be. Keeping people alive off the streets has to be a priority compared to everything else,” Marks says. “We also stopped any additional capital spending in our housing portfolio to make sure that we don't go too far into deficit in 2020. We stopped EMS capital purchases.”

Marks says the shelters are already turning away 10 to 15 people per night; with a second wave hitting the province and winter getting closer, answers on how to shelter these people will have to come fast. Jason Sereda, executive director of Living Space, is talking to the region’s agencies to find extra space; the Timmins Native Friendship Centre, which last winter opened its gym, will not be able to do so during the pandemic. “Nothing’s confirmed for winter yet,” says Sereda.

Discussions around community safety and the opioid crisis were front and centre at a September 22 Timmins council meeting. (The Porcupine Health Unit is seeing increased opioid deaths; between January and September 2018, there were eight deaths; in 2019, there were 13; this year, there have been 18 suspected deaths.) Mayor George Pirie urged Dave Landers, the city’s chief administrative officer, to schedule a meeting with the North East Local Area Health Network, calling social services “a patchwork that is failing.” In an interview with TVO.org, Pirie stressed that the municipality alone cannot effectively address the shelter issue. “We need resources here and for the local Indigenous communities as well. We need help. We're not getting the funding from anywhere.”

Back behind Living Space, Ryan continues to hold out hope not only for himself but also for those in similar predicaments. “I would imagine [people] hope for good local community. They need support from the local communities — all of them.”

Timmins
Why this family crowdsourced ideas for its first Christmas celebration in Timmins
Although Nikitha Balasubramanya and her family are Hindu, they wanted to give their three-year-old the full Christmas experience this year. So they turned to social media for suggestions — and it delivered.
Ashley Okwuosa
Timmins
Reporting the Opioid Crisis in Ontario's North 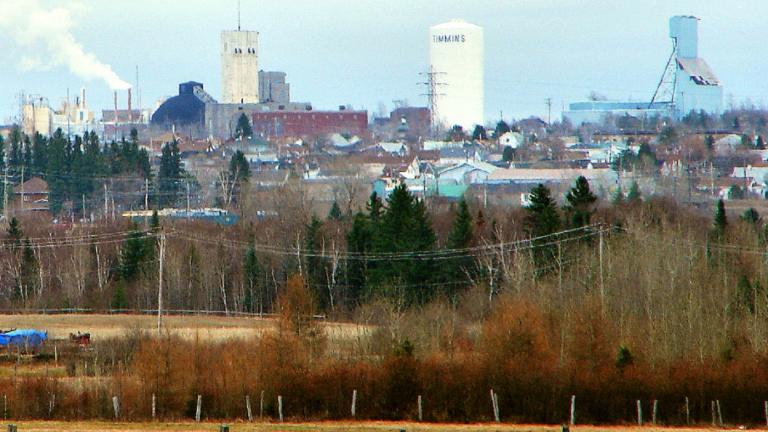 Timmins
In 2018, Timmins vowed to address racism. So what has it done since then?
Nick Dunne
sfy39587stp16