TVO On The Road: The Thousand Islands Parkway

By Michael Lehan - Published on Feb 08, 2016
Eastern Ontario is home to a unique ecological region, thriving small businesses and the first steps in OLG's casino plan.

The eastern region of Ontario is a vibrant and ecologically diverse area home to a strong local food movement and the forefront of Ontario Lottery and Gaming's vision for the future. TVO.org explored the region through the Thousand Islands Parkway — a historic road that runs along the shores of the St. Lawrence River.

The videos and stories below document the history of the changing region and look toward its future as its residents fight to protect endangered species, develop new industries such as craft brewing, and navigate the next steps for casino gaming in the province.

As you travel east along Highway 401 past Kingston you might notice a sudden change in the landscape. The gentle slopes of forest and farmland give way to rocky hills of windswept pines — more like the rugged Canadian Shield of the north than the temperate shoreline of Lake Ontario. You've entered the Frontenac Arch, an arm of exposed bedrock that bridges the shield to the north, and the Adirondack Mountains in New York State to the south. Flowing through the arch is the St. Lawrence River and dotted along the channel is an archipelago of 1,864 islands referred to as the Thousand Islands. 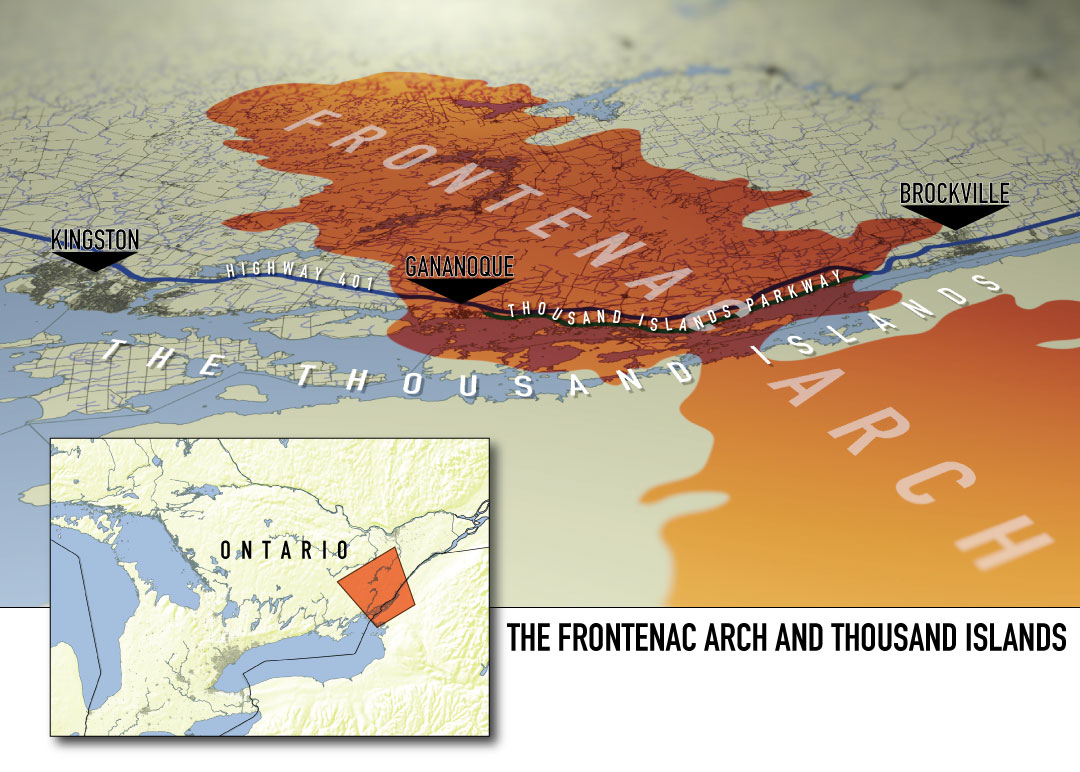 The story of the Thousand Islands begins long before humans first arrived in this part of the world. For billions of years there were no islands at all. This is the story of how a thousand hilltops became a thousand islands.

Over the decade he’s spent as an ecologist for Thousand Islands National Park, Josh Van Wieren has thought a lot about deerberry.

It's a shrub-sized plant that sprouts tiny constellations of white flowers in the spring and blueberry-like fruit in the summer. Except perhaps to the deer who feast on it, it can appear a fairly mundane-looking plant, but it’s actually one of the national park’s highest operational priorities.

Thousand Islands National Park, and the Frontenac Arch that houses it, are home to a large number of plants, animals and insects in similarly precarious states of existence. Of Ontario’s identified species-at-risk, the area has 33 regularly occurring species (ones that live in the area year-round), eight migratory ones (mostly birds), and another 13 that have been spotted but never officially tracked, Van Wieren says. That’s 54 species of the province’s official list of 217—about 25 per cent.

The local food movement in the Thousand Islands region has something other areas don’t: Wendy Banks.

The head of the region’s local food initiative remembers when the effort was small enough to fit around a kitchen table. Don Ross and several area farmers gathered more than 12 years ago to discuss the importance of food from the region.

“A lot of produce gets its flavour from different soil – everybody is pretty familiar with that from the wine-growing industry but it affects the taste of everything,” Ross, executive director of the Frontenac Arch Biosphere, says. “Here we have an unusual geography of food related to the rest of Ontario. All the fields are small – we seldom have a square field around here because they're fields that tend to fit into pockets of soil in that rugged Canadian Shield landscape. Those pockets of soil are very different chemistry from place to place.”

Local flavours weren’t always readily available in the Thousand Islands region. It took the handful of people around the table to make the connections. In the second year, the Frontenac Arch Biosphere had about 35 local producers involved. Today there are more than 100 participants in the program which covers the entire Frontenac region.

The Gananoque Brewing Company is taking advantage of the local food movement in the Thousand Islands. Located in the town of Gananoque, the five-year-old brewery sources many of its ingredients from local producers.

‘I don’t want to be flippant, but it’s money that counts in business …’ — Chuck Keeling, Great Canadian Gaming

Ontario Lottery and Gaming Corporation has a lot riding on Gananoque.

Casino Thousand Islands, just outside the tourist town, is the agency’s first foray in a plan to hand the province’s casinos over to a private operator. The goal is to boost revenue from gambling while letting the private market handle the costs of renovating and expanding casinos.

If all goes well in the region, OLG will get out of the business of running casinos directly throughout the province and hopes to boost the annual dividend it takes from casinos and lotteries from $2 billion to $3 billion.

Michael Lehan is a former digital media producer with TVO.org.