Turning Shakespeare’s ‘The Tempest’ into an aboriginal story

"Shakespeare is a drunken savage with some imagination whose plays please only in London and Canada." - Voltaire

As an actor and theatre director, I believe we choose to produce the plays of William Shakespeare in part because he affords us voice to examine what we cannot easily say with colloquial speech. Through poetic distance, he engages our imagination and advocates for us to search out a more profound level of understanding of the human condition. In that way, he remains a 450-year-old contemporary writer addressing emotional truths that we all carry within ourselves, and which we continually need to confront.

To me, The Tempest has always been a New World play, and a connection to the world of the west-coast Haida Gwaii (formerly known as the Queen Charlotte Islands) has always seemed a reasonable and respectful cultural metaphor to explore.  With the release of the Truth and Reconciliation Commission report on residential schools last year, the time and opportunity seemed ripe for this interpretation. So in February, the theatre department I direct at Alberta’s Red Deer College presented a Haida Gwaii adaptation of one of Shakespeare’s most ambiguous and pliable plays.

"Our production was about the capacity within us and our families to reach beyond the mistrust and scars of the past."

The mysterious world Emily Carr revealed through her paintings of Salish, Bella Coola, Haida, Tsimshian and Tlingit begged a deeper understanding into an advanced culture both exotic and yet familiar, and her images informed our design. Our production team believed the world of Haida Gwaii, set amid the haunting west coast rainforest, must have seemed no less wondrous and foreign to Captain George Vancouver and the men of the ship Discovery, than what the Elizabethans saw in the Barbary islands off the coast of North Africa.

Against this background, The Tempest’s tale of usurpers in a far-off exotic land, would feel familiar. The style of performance could also be released from a strictly naturalist portrayal as the Haida practice of mask and performance was ripe for the masque divertissement performed within the play. It was our chance to celebrate a rich culture of art, expression and powerful spiritualism in communion with the natural world.

None of our cast was of indigenous background, however. Conscious of the possibility of co-opting a culture, we opened a dialogue with the local Native Friendship Society to address any issues of cultural appropriation.

With their assistance, we invited Haida elder and master carver Reg Davidson to open our awareness to the diversity of messages possible. Under his tutelage, we gained an understanding and reverence for Haida beliefs and use of masks and totems. 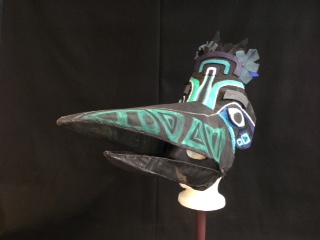 Davidson reassured and freed us from the stigma that we held about performing Haida song and dance by explaining how they were created to be performed and shared, becoming powerful gifts for all who embrace them with respect. Here, then, was the lesson we needed The Tempest’s Prospero to learn as well.

For us, Ariel, the resident airy spirit of the Shakespeare’s island, became Yaahl Jaad – Raven Woman – whose life story of trickery and assistance to mankind is well embraced by the Haida culture. The intelligent and communicative bird became tutor and companion to our Prospero.

Caliban represented for us the progeny of an intermarriage between Shakespeare’s “blue-eyed hag’’ Sycorax and local inhabitants, trapped by his ancestry between two worlds.  Neither wholly native nor European, he is unable to accept either. When he first meets Prospero he is eager to please, but his fall from grace is that he knows no other morality than what he has experienced, let alone a European understanding of property, propriety or justice. The troublesome “drunken Indian” reference in our play is manifest through his corruption at the hands of self-seeking European masters.

On our island, Prospero’s true magic is acquired from the island spirits of the Raven, dogfish, wolf and beaver that he comes to commune with and to understand. He gains knowledge from his island hosts, which enhances the European perspective he brought with him. As Davidson taught us, hate holds you prisoner and must be released to move forward.  What Prospero asks of us in his final speech is to recognize that he, too, can change.

If The Tempest is indeed a New World story, then it follows that this is our story, and that we have to tell it. It is a chance to explore the dangerous themes of retribution, reclamation and reconciliation at a time when our nation is coming to grips with the sad failings it has perpetrated upon its first peoples.

In the end, Red Deer College’s production was not directly about the West Coast indigenous experience, but about the capacity within us and our families to reach beyond the mistrust and scars of the past, to burst forward into new healing, to access our capacity to forgive and to create a brave new world.

It is always a treat to work with such heightened language in a time when we value literary imagery so little in our lives; it lifts us from the mediocrity of our commonplace vocabulary to something closer to the sublime.

Revisiting Shakespeare through a contemporary lens, we find his relevancy to speak to new audiences.  As a poet, he recognized the role of art to provide entertaining commentary on his society. To Voltaire he becomes like Caliban, a “drunken savage” child of two worlds, able to amaze and fascinate contemporary audiences of any age.

Thomas teaches directing in the Theatre Performance and Creation program of Red Deer College. Currently artistic director of Prime Stock Theatre, he has directed more than 100 plays, and is a certified instructor with Fight Directors’Canada.

Thomas teaches directing in the Theatre Performance and Creation program of Red Deer College. Currently artistic director of Prime Stock Theatre, he has directed more than 100 plays, and is a certified Instructor with Fight Directors’ Canada.

ANALYSIS: The TTC helps Toronto’s economy more than you might think. And remote work could undo those benefits.

Coronavirus
The State of COVID-19 in Jails