Trust issues: How much faith do Canadians have in government?

ANALYSIS: For a government to succeed with a new agenda, it needs to have the electorate’s trust. Here’s what the numbers say about what Canadians are thinking
By Brad Graham - Published on Sep 09, 2021
At the beginning of the federal election, trust of Canadians in government grew to 65 per cent. (Pgiam/istockphoto.com)

This is the first in a series of articles jointly produced by the Institute on Governance and Advanced Symbolics for TVO.org and iPolitics. Throughout the federal-election campaign, these articles will analyze the extent to which Canadians trust in government — and what that trust could mean for the future of our country.

The current federal election will determine who will lead Canada through the many challenges before us. For a government to succeed with a new agenda, it needs to have Canadians’ trust. As the campaign unfolds with the leaders’ debates, Canadians’ changing views of trust will determine the success of a new mandate.

Trust in government ranks highest in Atlantic Canada and Nunavut, which are followed by Quebec, Ontario, Manitoba, and Northwest Territories.

Trust declines further in British Columbia and Yukon and is most negative in Alberta and Saskatchewan. 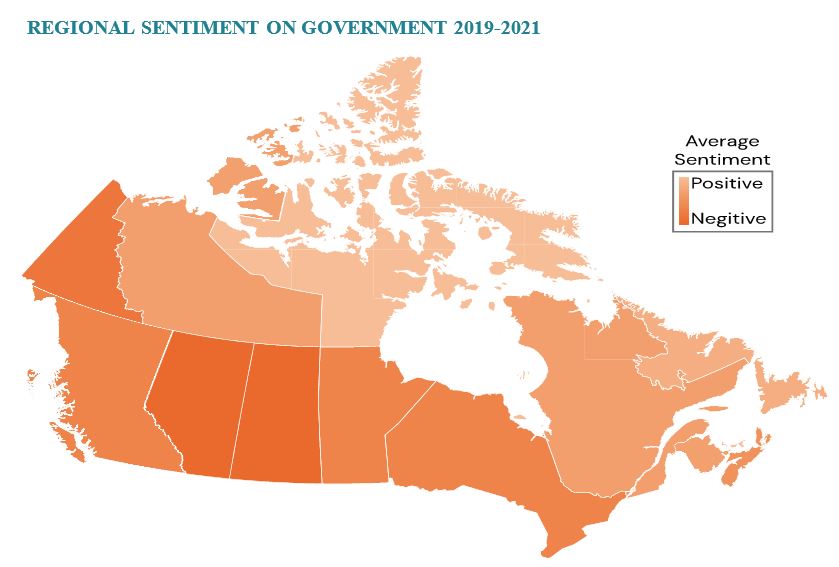 Canadians’ trust in the ability of governments to deliver on their mandates typically rises during an election campaign. Canadians’ trust going into this election was lower by four points than it was during the October 2019 election.

COVID-19 has greatly affected trust levels. After an initial increase in trust at the outset of the pandemic — as governments worked together and science-based information was made available to Canadians — each of the first three waves saw trust fall as governments tightened public-health measures. The effect of the fourth wave, which continues amid the current election campaign, is unclear at this point.

As the leaders’ debates unfold this week, we can expect to see volatility before longer-term trends of trust in government can be established. Trust levels coming out of the election will reflect Canadians’ faith in a new government’s ability to deal with important issues.

Research tells us that: