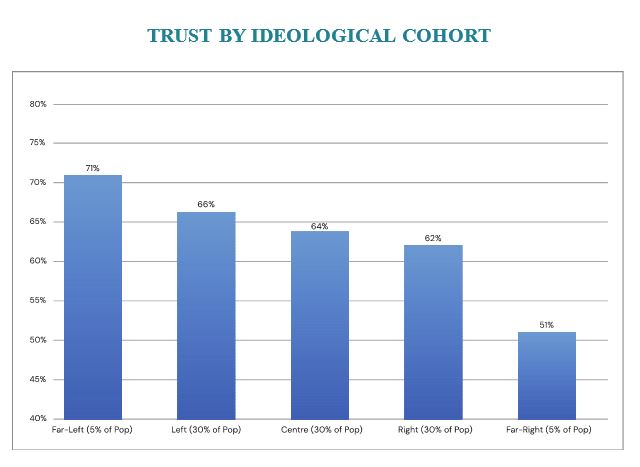 While trust in government institutions was consistent heading into the first several days of the election, the expected election trust bump was short-lived. Canadians were questioning governments’ responsiveness — which is one of the leading components of trust — as they grappled with the fourth wave of COVID-19 and as wildfires continued to burn in the West.

The day after the August 15 election call, the government in Afghanistan collapsed, and Canadians witnessed not only a chaotic exit led by Western governments, but also an unfolding humanitarian crisis. Trust dropped from August 26, the day of the last Canadian exit flight, to a low of 51 per cent on August 29.

Politicians lead governments. The sharp and negative turn that trust in government took in September occurred as leaders’ election rhetoric sharpened around such issues as the role of the private sector in health care, access to abortion services, gun control, and the need to increase vaccination rates in Canada.

We are also seeing a very “un-Canadian” rise in political-protest aggression and vitriol from anti-vaxxers, reportedly led by members of the far right. We know that the 5 per cent on the far right are extremely engaged on social media and have by far the lowest level of trust in government.

Overall, the fourth wave of COVID-19 is not having a significant impact on Canadians’ trust in government, as it is seen as a “pandemic of the unvaccinated.”

A new government will need the trust of Canadians if it is to effectively implement a new mandate. If trust continues to decline across all five of the IOG/ASI ideological cohorts, it will be increasingly difficult for a new government to achieve consensus when addressing such key files as climate change and systemic racism.

We can expect Canadians to be more engaged and interested in the campaign as the televised leaders’ debates unfold. It will be interesting to see whether these debates also affect Canadians’ longer-term views on the ability of government and its institutions to address leaders’ key commitments.