Through a magical door to acceptance

Imagine being able to travel to the other side of the world in the time it takes you to walk through the closest door. This is the world that Mohsin Hamid creates in his latest book, Exit West. Hamid pictures a world where doors replace passport control with the promise of a new life on the other side.

The UN Refugee Agency estimates that there are about 65 million refugees world-wide, and we see some of them in the news – those who survived the voyage – on worn-out boats in the middle of the sea. It’s safe to say that those of us who've been lucky enough not to experience that kind of desperation would find it difficult to understand why someone would endanger their life by getting into one of those boats in the first place.

We all have access to doors – doors through which we welcome our loved ones and friends, and doors that we lock to protect us at night to keep us safe. In Exit West, Hamid’s use of magical quick-access doors humanizes refugees and shrinks the inaccessibility to the world that so many people experience. 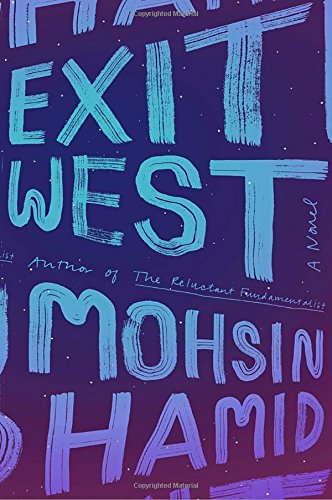 The story follows Saeed and Nadia, who are at the beginning of their adult lives but live in a nameless country that is falling apart amidst political unrest. It depicts a young couple just like any other, falling in love, going out to eat Chinese food and smoking weed on the rooftop as the stars fall from the sky.  It's about how both women and men must cover themselves beneath heavy black robes; Nadia so men don't bother her, and Saeed to sneak into his lover’s abode.  It’s a world where access to social media provides a lifeline to the outside world and listening to records in a house where the walls have been blown out is a defiant act of being alive.

Hamid writes, "It might seem odd that in cities teetering at the edge of the abyss young people still go to class – in this case an evening class on corporate identity and product branding – but that is the way of things, with cities as with life, for one moment we are puttering about our errands as usual and the next we are dying, and our eternally impending ending does not put a stop to our transient beginnings and middles until the instant when it does."

Within the global community, it once used to be honourable to welcome refugees, and now it's seen as right and necessary to not only deny them passage but to deny them acknowledgment. In Europe and the United States, it’s been debated as to whether those that have fled their homes should be called refugees or migrants. As if to imply that a hierarchy for desperation exists, one can only be a refugee if one's country is at war but if one flees because of the inability to feed their family, then it is a choice, and one that denies them access to basic human rights. And even for those fleeing civil war, there is no longer a guarantee that they would be received as refugees with President Trump’s travel ban that places restrictions on refugees from several war-torn countries.

It seems that the worth of an individual is now measured by what they can offer to their new country. People have been reduced to how many points their skills add up to rather than being seen as human beings who need a safe place to live.

I’ve been an economic migrant in the U.K., but perhaps I'm biased because prior to that I was a former refugee in a welcoming Canada. I think many fail to realize that luck is a factor in terms of where a person is born. What's striking about Hamid's book is his borderless world persuades the reader to see life through the eyes of those without a nation.

Exit West is one of the most complex, lyrical and exquisite books that I’ve ever read. And it’s a reminder that we are more alike than not.

Tonight I speak to Hamid about nativism, empathy,  and I discover why he says this book was a form of activism for him.