This is not your parents’ food guide

OPINION: The 2019 version of Canada’s Food Guide won’t tell you how much cheese or bread to eat, writes Corey Mintz. Instead, it may actually encourage healthy eating habits
By Corey Mintz - Published on Jan 23, 2019
The new Canada’s Food Guide suggests that we “build a plate,” half of which should contain fruits and vegetables. (Health Canada)

The cover of the 2019 version of Canada’s Food Guide — produced by Health Canada and released Tuesday — is staggering.

It features a photo of a healthy-looking plate of food. The heavily lit bird’s-eye shot would not be out of place on the Instagram feed of someone training for a marathon. Produce, including broccoli, carrots, berries, and peas, takes up half the plate. A quarter of the plate is protein — kidney beans beside a wedge of salmon, a thimbleful of yogurt (the only dairy product visible), four almonds and four walnuts, three slices of beef, three slices of pork, and two cubes of tofu. Those numbers are no accident: they’re a message, clear and direct. The remaining quarter plate features grains such as brown rice and quinoa, as well as a small triangle of bread that might as well be a crouton.

If I were in the wheat, dairy, or beef industries, I would see this photo as a hand in my pocket. I feel sympathy for businesses affected by the government’s telling people to eat fewer of their products, so I can hardly blame them for attempting to influence Health Canada’s decision-making.

In school, I was taught from the 1982 version of the Canada Food Guide. On its cover, the four main food groups — produce, dairy, protein, and grains — were arranged annularly around a lip-smacking cartoon sun, and each one got equal billing.

Even the 2007 edition was industry-friendly: the food was laid out in a rainbow, and many of the products were illustrated alongside or in packaging (a fish sat next to a can of fish, spinach appeared wrapped in plastic, etc.). Up front were two whole loaves of bread and a carton of milk.

If it seems as if I’m too preoccupied with image, consider how we make food choices today. Health Canada obviously did: there’s an entire section of the new guide called “Be aware of food marketing.” It challenges readers to question what influences their food choices, whether it’s social media, sponsored content, sponsored events, product placement, celebrity endorsements, or targeted advertising based on browser history. The section displays a nuanced understanding of the modern influence-peddling — and of the notion that inoculating young minds against it will go a lot further toward encouraging better dietary habits than would prescribing a specific dosage of cheese, something the new guide doesn’t do.

That’s probably the most obvious change. The 1949 version of the guide, known as Canada’s Food Rules, recommends at least one serving of potatoes a day. Grain products dominate the 1992 iteration. Page one of the 2007 guide had us drinking two to four servings of “milk and alternatives” a day, age depending. The new guide doesn’t tell us how much of anything to eat; instead, it suggests that we “build a plate,” half of which should consist of fruits and vegetables. I had to search for five minutes to find any mention of milk (it’s listed as a healthy alternative in the section called “Make water your drink of choice”).

And while industries may grumble, the new guide is earning praise from public-health advocacy organizations such as Community Food Centres Canada and the Heart and Stroke Foundation, both which have applauded the water-drinking directives and the targeting of fruit juice as a source of unnecessary sugar. 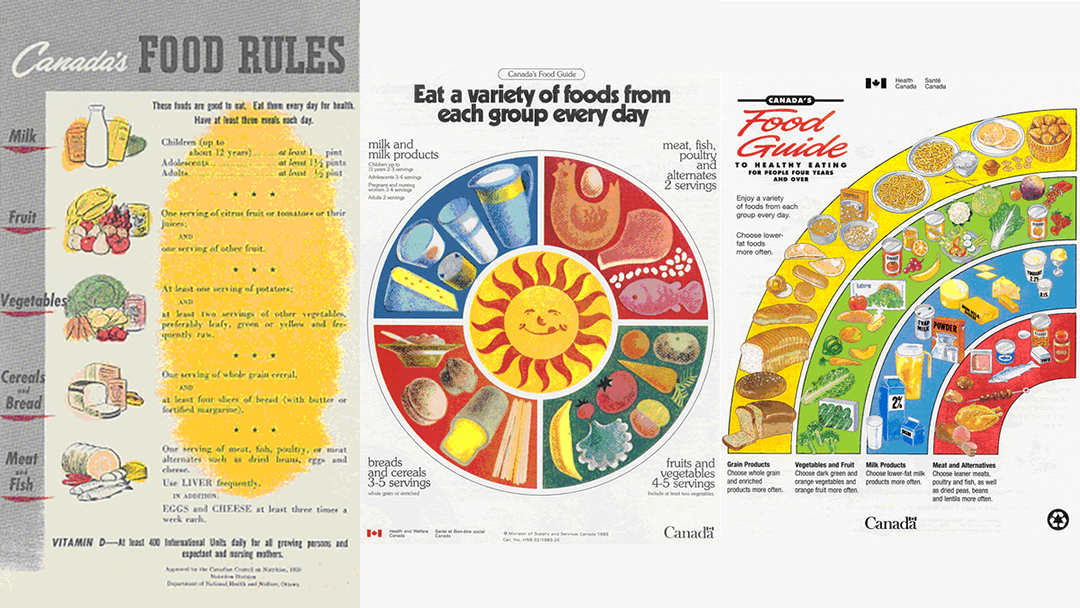 Still, the revamped guide is not without its peculiarities. The page about water offers the tip that you can drink it hot or cold — which, while technically true, feels as if it might’ve been written by a robot that has developed sentience but has not yet had its empathy chip installed.

A section that explains “How to cook more often” grabs my attention. It provides practical tips for turning leftovers from one meal into multiple future meals: “Chilli one night turns into tacos the next and a topping for spaghetti another night.”

“It seems to me that less cooking is done today than used to be and that when it is done, it is so much more work because we have lost the habit of the continuous kitchen,” wrote Kafka in her 1995 book, Roasting: A Simple Art. “We start each meal from scratch with fresh shopping and a brand-new independent recipe. Our predecessors didn’t, and we can save ourselves a great deal of work and have better, more economical food with greater depth of flavor by seeing cooking as an ongoing process.”

That’s how I live. The other night, I bought a roast chicken from the supermarket. After eating it over the course of two meals, I boiled the bones to make a stock. As I write this, I’m cooking dried kidney beans in the stock. Soon, I’ll have soup.

But how would I have known how to do any of it if I hadn’t been taught by my cooking-school instructors? How would I know how to do my taxes if I hadn’t learned math in school? You can’t cook efficiently until someone has taught you the basic skills.

We should be teaching cooking skills in public school (yes, I’m on that soapbox again). And in the kitchen, it would be easy to incorporate lessons in math, science, history, and language, too. While there’s no such revolutionary change on the horizon, the new Canada’s Food Guide demonstrates that the federal government views cooking as a matter of public health. That attitude lays the groundwork for change.

Coronavirus
It’s now officially patio season — but is it safe for servers to go back to work?

Most of the province is now in Stage 2 of Ontario’s reopening plan, which means that outdoor dining is a go. That has waitstaff choosing between potentially heightened risk and financial need.

Coronavirus
It’s no picnic: What restaurant reopenings look like in Ontario
Jessica Huras