Think you’ve been working remotely too long? These students haven’t been to class since 2019

Rachel Perzan has tried to imagine a high-school experience without panic attacks, strained interpersonal connections, and monotonous days spent at home, but it’s all she’s ever known. The Hammarskjold High School student, who finished Grade 11 in June, has been dealing with the impact of distance learning on her education. But she and other Hammarskjold students were dealing with it even before the pandemic: due to bomb threats at the Thunder Bay school, its students have been out of the classroom since 2019.

“Every day was a guessing game,” Perzan says of the threats. “Am I going home early? Am I going to make it to school? Am I going to have to get someone to come pick me up? Even when you're in class and you're trying to focus, it’s still in the back of your mind that we could go into a lockdown at any moment.”

The string of bomb threats, which took place between October 2018 and April 2019, derailed high-school events and classes, triggered lockdowns, and cancelled 12 full days of classes. (Two pupils were later arrested.) In order to minimize the disruption and keep students on pace with their studies, the school moved to online learning in March 2019 — meaning that students in grades 11 and 12 at Hammarskjold High School have endured the longest stretch of remote learning in the country.

Research has linked extended periods of remote learning to unprecedented disruption to education, social isolation, loneliness, and mental-health consequences. For students at Hammarskjold, the additional school year that was peppered with bomb threats has lengthened displacement from high-school normalcy, and experts believe the event puts this adolescent cohort at even greater risk of falling behind.

Jennifer Connolly, a professor of psychology at York University who specializes in youth mental health and developmental psychology, says that high school is critical, because it helps kids learn how to establish meaningful relationships and navigate social settings. She believes the additional year of bomb threats would have been disruptive, traumatic, and disorienting and affected students’ sense of community and safety. “They will be forever shaped by these few years,” she says. “The pandemic on top of [that experience] would reinforce those feelings and likely cause a greater sense of loneliness and disconnection from their community and from everyday life.”

Connolly says that isolation can drive or exacerbate mental-health issues, such as anxiety and depression, and that, in severe cases, students who haven’t been able to establish valuable relationships in high school may struggle to do so as adults. But, she adds, if students are supported, they will often bounce back: social and mental-health services, as well as structured environments with face-to-face connections, will be critical.

“Peer-group activities, both for learning and for socializing, will be important to help kids get back into the rhythm of social interaction,” she says. “ I would encourage parents to involve their children in some after-school activities, of course within the bounds of public safety.  Schools and educators can use peer-learning opportunities to facilitate social interaction in the service of learning as well.”

When school resumes in the fall, parents, guardians, and school staff should be especially mindful of how they can help these students in their transition, she says. They should look out for learning gaps and have a plan to address them, for example. Parents and educators, she says, should also watch out for behavioural changes and signs of anxiety, such as not wanting to go to school or see friends, or not getting appropriate amounts of food or sleep. In such cases, she suggests counselling.

“The adjustment will take time,” she says. “School will seem very different to many kids — for many, their last experience of school was as an elementary student … Kids can be very sensitive about any perceived deficits, and so lots of reassurance from parents and educators that they will catch up will be helpful.”

Making new friends is something Tori Pelechaty hopes she’ll get another chance at in her senior year. The student, who finished Grade 11 in June, says she hoped that high school would allow her to branch out from her friend group and meet new people. That’s proven to be difficult to do. “I’ve always thought about high school like how it is in the movies,” she says. “Part of me knew it wouldn’t be like that, but it’s been less than ordinary, being at home all the time. If I could tell my Grade 8 self one thing, I’d say go out there, take different classes, and make as many friends as possible, right at the start.”

Kevin Le graduated at the end of June in an empty gymnasium, meeting his principal and vice-principal for a photo with diploma in hand. But that’s just a piece of paper, he says, adding that he feels he’s not prepared for post-secondary life. “I feel like I’ve been cheated out of a normal high-school experience,” he says. “Really I only had one full year … I’m not annoyed or mad, just more disappointed that I lost three years of my high-school experience.”

As a hands-on learner, Le says he struggled with the online curriculum and felt defeated when the provincial government announced that remote learning would continue until the end of the school year. He plans to return to Hammarskjold for an extra year in September to boost his marks, in hopes that he’ll get accepted at Confederation College’s aviation-flight management program. He’s aiming to play on the sports teams he joined in earlier years — something he remembers being the highlight of high school.

An emailed statement sent from the Lakehead District School Board on behalf of principal Derek Di Blasio indicates that the school provided social-work services, individual counselling, and group debriefings after the bomb threats and continues to offer all students the option of seeing a social worker: “The students of Hammarskjold High School are resilient, but have had to endure exceptional circumstances over their secondary school career,” it reads. “They have used their strong sense of pride in their school, their resilience and sense of community to rise above and succeed despite the difficulties.”

When contacted about the decision to remain in a remote model and the added impact it might have on the students at Hammarskjold, a spokesperson for Education Minister Stephen Lecce acknowledged that prolonged absence from in-person activity at schools can affect mental health and well-being but pointed to investments the provincial government is making.

“We will continue to follow the best advice of the Chief Medical Officer of Health, as we work to get students back to class, full-time, while continuing to keep Ontario schools safe,” they told TVO.org via email. “With a focus on student wellness, our government unveiled our $85 million plan to help students recover from learning loss with a focus on mental health, math and reading supports, in addition to an $80 million investment in mental health supports, staffing, and specialized intervention.”

Some education experts, however, say the provincial government’s plan is short on details and lacks a strong vision for getting students back on track. Annie Kidder, executive director of People for Education, says that, while money is earmarked for mental health and well-being, she still hasn’t heard much about the province’s back-to-school response beyond mask-wearing mandates, ventilation, and the sharing of common spaces.

“We see the stats saying that kids are struggling from being out of school,” she says.

“It's still very, very difficult to access support for young people who are in a crisis, and it's not easy. This is not teachers’ expertise, nor should it be, to be providing support for mental illness. What is important is that the supports are there.”

Kidder says such supports could come from increasing the number of mental-health professionals available within schools or putting more funding toward community mental-health organizations. According to Kidder, British Columbia’s education recovery plan, released in June, adopts a comprehensive approach and looks at a number of relevant factors in education, such as literacy, numeracy, social-emotional development, and mental health and wellness — she suggests the Ontario government should look to it for guidance.

“There’s another piece that’s missing, and that’s why we bring up B.C., who specifically talks about a holistic plan. They had a taskforce … they had ministry staff, political stuff, policymakers, teachers, principals, parents, students, people from health,” she says. “When you have these people working together, then you're much more likely to have that big vision.”

Perzan, who will enter her senior year in the fall, is looking for a fresh start and has even thought about taking a victory lap, like Le. She’s says she’s relieved to be finished school for the year and is trying to put the past three behind her. By September, she says, she’s hoping she’ll be able to see her school as more than a former lockdown site or potential breeding ground for COVID-19.

“We’ve been pushed through high school just to get it over with … I haven’t had a full year of high school yet,” she says. “Being able to make memories in the school is what I’m most looking forward to. It’s that chance to bond with your peers, even ones you don’t usually talk to … They’re small things but they mean a lot.”

In the interest of full disclosure: since it was created in 1970, TVO has been part of the province’s delivery of distance learning. Today, TVO offers online secondary-school courses through the Independent Learning Centre; it has been asked by the province to help implement a provincial online-learning system in Ontario. 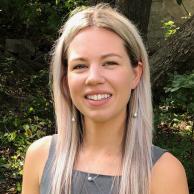 Lindsay Campbell is a freelance journalist based in Thunder Bay and Ottawa whose work has been featured in such publications as the Globe and Mail, Modern Farmer, and Nunatsiaq News.

Society
‘A high emotional toll’: Why Ontario veterinarians are under pressure
Diane Peters