Private companies carry out almost half of all lab tests in Ontario — one group is fighting to make them more transparent and accountable
By Sarah Reid - Published on Dec 18, 2017
The Ontario Coalition for Lab Reform sent out letters in personalized test tubes to all Ontario MPPs last month. (OCLR)

​The Ontario Coalition for Lab Reform wants to make sure Ontario labs serve patient interests first and operate transparently. The group, made up of small laboratories, doctors, patient groups, and others, sent letters to all Ontario MPPs in late November in personalized test tubes and held a press conference at Queen’s Park on Thursday, urging politicians to learn about the lab system in Ontario before regulations are amended next year.

In Ontario, a mix of service providers perform lab testing, but hospital laboratories make up 47 per cent of the market, and community laboratories, run by private corporations, account for another 46 per cent, according to the Auditor General of Ontario’s 2017 annual report, released in early December. The remaining tests are performed at Public Health Ontario labs and physicians’ offices.

Almost half of all lab tests, then, are done by private companies, seven of which operate in the province today — the two largest run more than 90 per cent of community laboratories in the province. LifeLabs received just over 63 per cent of all Ministry of Health funding for community labs in 2015-16 ($404.1 million), and Dynacare received more than 30 per cent ($195.7 million), according to the AG. 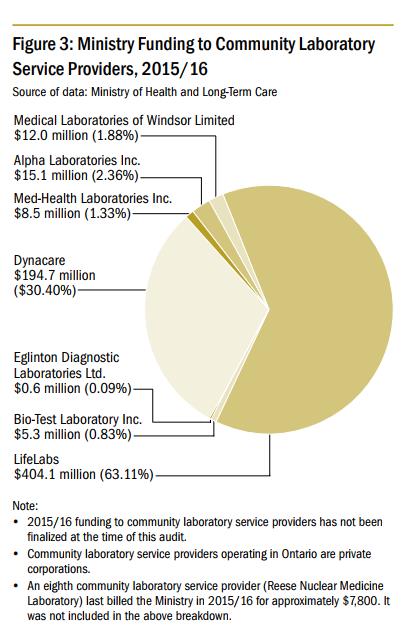 Gerard Kennedy, a former Liberal MP and MPP who is now the CEO of Alpha Labs and a spokesman for the coalition, says having two large firms deliver most of the service “isn’t conducive to the kind of transparency and accountability that there really should be for a public health care service … it really is incumbent on the government to design the right incentives to make sure that whatever the laboratory organizations do is going to be in the public interest.”

Currently, there is no onus on community lab service providers to locate in particular areas of the province: they have total discretion over where they locate collection centres, the AG’s report says.

According to the AG, the Ministry of Health “has not regularly performed any detailed analysis to identify areas of the province underserved by community laboratory service providers’ collection centres, and has not taken effective action to improve the accessibility, availability and capacity of these services throughout the province.”

This has left some communities underserved, Kennedy says, even in urban areas. Ottawa and the surrounding area, for example, had a total volume of tests that was 43 per cent lower per capita than Hamilton Niagara in 2015.

Although 90 per cent of rural Ontarians live within a 30-minute drive of a collection centre, the AG says the Ministry of Health did not “consider the differences in capacity (such as operating hours or the number of blood-drawing chairs) that could affect how many patients the collection centres can serve.” This can add up to long waiting times.

Taking a blood sample should take five to six minutes, Kennedy says, but in some parts of the province, people are waiting two to three hours. “And what they don’t realize is that’s not a government decision — that’s not because of cutbacks: it’s simply because a private organization has made a decision about how much [service] they should get.”

The Ontario government is planning to sign three-year transfer payment agreements with these private labs in 2017/18, and as part of that plan, providers that operate in northern or rural Ontario will receive more money. But the AG questions this move, “because the underserved areas are not necessarily located in rural and remote northern areas, based on our analysis.” Mississauga Halton, for example, has the second-lowest ratio of community collection centres in the province, her report shows.

The list of approved tests is also long out of date. The AG noted that a consulting firm engaged by the Ministry of Health identified 16 medically necessary tests that are currently not funded by the Ontario government, although they are available in both British Columbia and Alberta. The health ministry did not include any of these tests in its new draft price list, the report says, although the Ministry has indicated that the current list of uninsured tests “should be reviewed to determine if any of these tests have clinical validity and utility in the community setting.”

The cost of insuring the 16 new tests, which include those that diagnose and monitor different types of cancer, would cost the province less than $5 million, the AG found.

The Ministry plans to introduce a new price list in 2017/18, but it will be based on an analysis of how much tests cost to administer in other jurisdictions and settings (e.g., hospitals), not how much they actually cost to administer in private labs in Ontario. As the report says, “the Ministry does not have access to any financial information (such as costs of performing laboratory testing or profit margins) from community laboratory service providers under the fee-for-service arrangement currently in place with these providers.”

Private labs are paid on a fee-for-service basis, but the price list hasn’t been significantly updated since 1999, the AG says, meaning the health ministry overpaid community laboratory service providers “by at least $39 million in 2015/16.”

“The current price list is outdated and does not reflect changes in testing methods and technological advancements in laboratory testing, which have led to significant automation and cost reduction in performing many routine tests,” the report says.

And payments made to the labs are not tied to performance, the AG notes. “The Ministry also has not verified if community laboratory service providers have been billing OHIP accurately for tests actually performed.”

In 2015, a Lab Services Expert Panel, commissioned by the provincial government, said in its report that its “greatest concern lies in the complete absence of formal performance contracts and service level agreements with individual laboratories to clearly identify roles and responsibilities and deliver better value.”

Kennedy says nothing has changed. “In the last year and a half, there have been no standards, no contracts, no pressure on the laboratories to perform better,” he adds. “And it has us quite mystified and concerned about what’s happening next.”

In late August, the Ontario government posted a Health Insurance Act regulation amendment for public comment for 15 days. To find it, you had to know it was there and then search for it, or have the link. It concerned fees for lab tests and lab testing standards.

“The Ministry of Health is about to dramatically change the standards and funding system for the first time in 20 years,” reads the coalition’s letter, “but for unknown reasons is keeping all the details secret. Eric Hoskins confirmed the changes are consequential but has yet to commit to share the Ministry Labs Strategy with you before it is finalized — or with the thousands of healthcare practitioners who will be affected daily.”

“That regulation got put out in a very non-transparent way,” Kennedy says. “You cannot tell by looking at what was posted what the regulation is about … but it’s really all the transparency that’s planned for changing the test prices, for changing the way that things work.”

“Most of the details that could protect the public would seem to be headed for an agreement or a contract that is between the government and the labs, and all those terms might be kept private, which we think is ludicrous,” he says.

For its part, the Ministry of Health says it followed the rules in posting the regulation. The Ministry informed health stakeholders in Ontario — laboratories, Local Health Information Networks, hospital associations, health regulatory colleges, and other organizations who might be interested in submitting comments — of the posting, a spokesperson wrote in an email. And the level of detail provided was sufficient, she says, because there is no requirement to post more than a summary of the proposed changes to the regulatory registry. The regulation will now go to Cabinet for approval, but timing is subject to Cabinet confidentiality.

The Ministry says further regulatory amendments will happen in fiscal year 2018/19 — two under the Laboratory and Specimen Collection Centre Licensing Act and one more under the Public Hospitals Act. The spokesperson said no further policy details were available at this time.

These changes should be debated openly, Kennedy says. “In our view, it’s very tilted in favour of the large labs, but we can’t say why; we’re not allowed to unless that gets some public transparency. There’s a very strong risk that even if the Ministry had all of the resources it needed, that they could make some mistakes here. So we don’t understand why it wouldn’t make it public, why it wouldn’t let the physicians and physician organizations and the pathologists and the nurse practitioners that have to use the system every day — let them see and understand what’s happening.”

The Ministry says it developed its labs strategy in consultation with many stakeholder groups, including hospitals, the College of Physicians and Surgeons of Ontario, Canadian Blood Services, Aboriginal Health Access Centres, and others.

But Kennedy isn’t convinced. “A labs commissioner, a good set of standards, and everyday patient choice on the service — we think that those are the ingredients for a much better service,” he says. “We would easily be able to afford, based on what we’re paying, compared to elsewhere, the best tests for people and pretty even service across the province.”