After 42 years in power, the Progressive Conservatives found themselves on the ropes in the bitterly contested election campaign of 1985
By Jamie Bradburn - Published on May 24, 2018
In 1985, David Peterson (right) became the first Liberal premier of Ontario in decades. (Thomas Szlukovenyi/Globe and Mail)

This is the fifth in a series of articles detailing the elections that shaped Ontario.

Going into the 1985 provincial election, the Progressive Conservatives believed their reign in Ontario – which by then had exceeded four decades — would continue. Pre-election polls showed that they remained popular, and they had weathered changes in leadership over their long tenure in office. But a combination of blunders, complacency, a controversial education policy, internal divisions, a shift to the right, and voter weariness ended the era of the “Big Blue Machine.”

Politicians and pundits expected an election call when Premier William Davis announced a press conference for Thanksgiving 1984. Instead, after 13 years in office, Davis retired. The subsequent leadership race saw three candidates — Larry Grossman, Roy McMurtry, and Dennis Timbrell — run as party moderates. Former provincial treasurer Frank Miller represented the party’s right wing, which had felt ignored by Davis’s urban backroom advisers and looked to international smaller-government role models like Ronald Reagan and Margaret Thatcher for inspiration. Miller benefitted from the party’s decision — taken in order to avoid flooding the convention with delegates recruited by particular candidates — to decline new memberships before the January 1985 convention. He appealed to delegates who were small-town businessmen and professionals like many of his constituents in Muskoka, promising to implement economic policies that would balance the books and assist entrepreneurs.

Miller’s rivals depicted him as too old (at 57, he was two years older than Davis and had suffered a heart attack), too right-wing, and too out of touch. Delegates disagreed, and he defeated Grossman on the third ballot. Sworn into office on February 2, Miller’s cabinet mixed old faces from the Davis era with rookie ministers, including future premiers Ernie Eves and Mike Harris. Instead of focusing on establishing his governing style, Miller rushed into an election, which he called on March 25.

The campaign stumbled from the start. Lingering tensions from the leadership race meant that the Davis-era backroom team was excluded. Young advisers made a huge mistake when they ordered Miller to stick to the script and avoid talking to the press — a tall order for a man who spoke his mind and got along well with reporters. After the Globe and Mail criticized Miller’s campaigning style, he told a key adviser, “You have destroyed my relationship with the press and my confidence in myself, and you have done it all in four days.” Miller also avoided participating in leaders’ debates. This aloofness added to the public’s perception that the PCs believed they were the province’s natural governing party.

Liberal leader David Peterson embraced voters happy with the middle. “To most political watchers at Queen’s Park,” journalist Thomas Walkom noted, “Peterson seemed the most unlikely person to bring the Liberals to office after 42 years in opposition. Pleasant but dull, he was an indifferent speaker and, in the legislature, a lacklustre opposition leader.” The Liberals had moved in a more progressive and urban direction under Peterson, who had led the party since 1982. Branching out from their traditional rural base, they now supported policies such as pay equity and increased funding for daycare and hospitals. His staff pitched him as a caring, compassionate businessman — he got rid of his large eyeglasses and dull suits. When the election was called, he took a page from former provincial NDP leader Stephen Lewis’s playbook and made policy announcements at strategically relevant locations. He even promised to allow beer and wine sales at corner stores.

Like Miller and Peterson, the NDP’s Bob Rae was participating in his first campaign as party leader. The party’s coffers weren’t overflowing with cash, so corners had to be cut. “I had to share a bus with the press,” he later recalled. “Someone gave me an electric piano, and I drove them crazy with what I thought were clever songs about Frank Miller and the Tories.” The NDP platform shared similarities with the Liberals’: both supported pay equity and promised to fight pollution, reduce unemployment, and reverse cutbacks to education and health. The campaign team assumed that the PCs would win and aimed to finish in second place, a strategy Rae disagreed with. His awkwardness compared to Peterson on the campaign trail didn’t help, nor did strained relations with some party members stretching back to his leadership win in 1982.

By mid-April, the PCs were sliding. Canvassing revealed that voters were nervous about the party’s rightward shift and its embrace of rural and small-town values, and felt it was time for a change. When asked about pay equity, Miller wondered how anyone could equate the relative worth of his male driver and female secretary (“My secretary can save my job,” he observed, “but my driver can save my life”). Although voters were interested in educational, environmental, and social policies, the PCs stuck to their business-centric “Enterprise Ontario” platform. The party’s poor handling of an incident involving a truck that leaked PCBs for 250 kilometres in northern Ontario was embarrassing, as was an “All-Ontario Night” rally held via satellite hookups across the province that ran behind schedule, suffered from transmission hiccups, and included a speech in which Miller noted that the Tories deserved to be the party of Ontario. The press’s turn against the party may best be illustrated by an editorial page column in the Kingston Whig-Standard that listed “100 reasons why you shouldn’t vote Conservative on election day.” 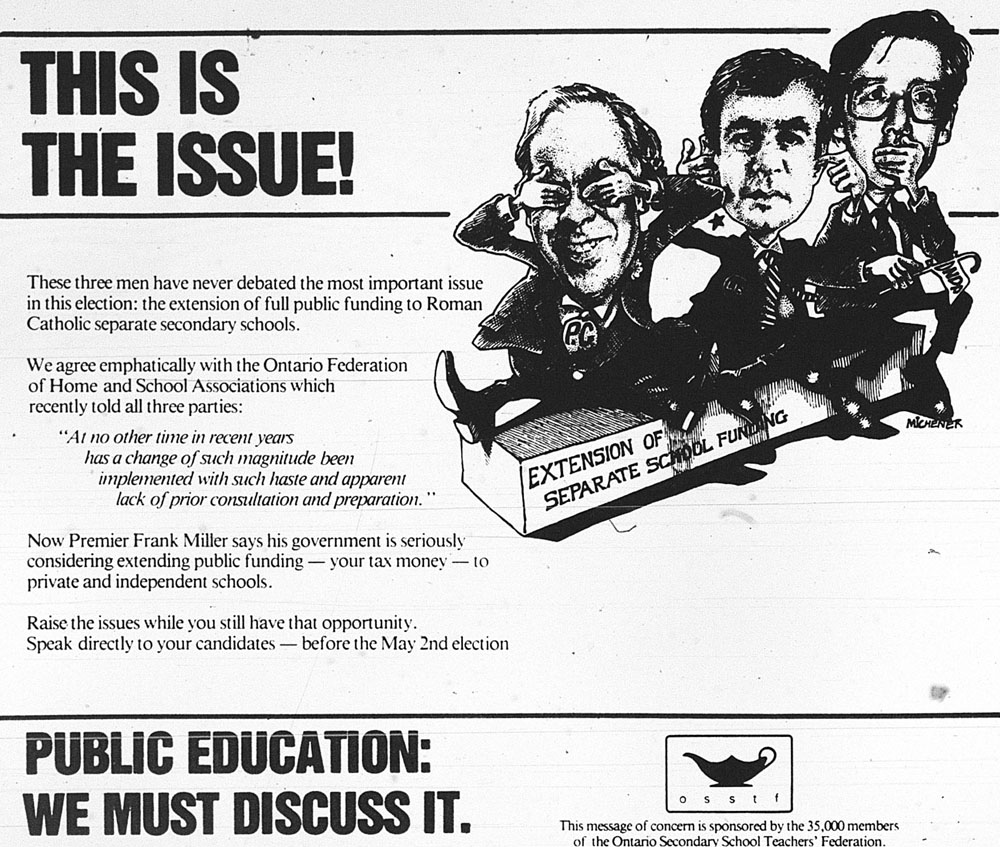 One of Davis’s last policy initiatives proved explosive. In June 1984, he announced that full funding would be extended to the province’s Catholic separate school system beyond Grade 10. The Liberals and the NDP supported the idea on the basis of fairness and constitutional arguments stretching back to 1867. The PCs felt that their support for it would break the Liberal hold on Catholic votes, but it succeeded only in further alienating the PCs’ traditional middle-class Protestant base. Tensions were heightened when Toronto Anglican Archbishop Lewis Garnsworthy compared Davis to Adolf Hitler because of the former’s willingness to change education by decree — a statement that was criticized by all party leaders. Garnsworthy later privately admitted, “I fear I’ve done something terrible.” In Essex County, where the population mix raised the possibility that small-town public high schools would be handed over to the separate board, independent anti-full-funding candidates ran in two ridings — one ended up outperforming the NDP in Essex South.

After the May 2 vote, the PCs were left with 52 seats — far short of a majority. Eight cabinet ministers were swept away. The next morning, Miller blamed the outcome on the full-funding controversy and hinted that he might scrap the policy, angering Catholics and party veterans. Peterson, whose Liberals finished with 48 seats, later said he thought that if the campaign had run another week, he might have won a majority. Rae, while disappointed to have finished third with 25 seats, told NDP supporters that there would be “interesting discussions” regarding the balance of power.

Those discussions allowed the Liberals and the NDP to reach an agreement. The Liberals would govern as long as they implemented certain NDP policies and didn’t call an election over the next two years. In return, the NDP promised not to trigger an election via a non-confidence vote. A four-page document outlined the terms, which included introducing a freedom of information bill, a committee to investigate patronage, election-finance reforms, and television in the legislature; broadening the powers of the provincial auditor; allowing public servants to participate in political activity; and investigating the commercialization of health services.

All that was left to do was topple Miller’s government. In a final effort to stay afloat, the PCs delivered a throne speech on June 4 that introduced an agenda with echoes of the Liberal and NDP platforms. In his final speech as premier, Miller attacked the opposition, warning that the NDP had signed its death warrant and that the Liberals would rush into an election. “We know that at the first opportunity, they will engineer an excuse to run back to the polls so they can get the socialist monkey off their back,” Miller said. “We do not fear an election. We will be ready. We have already begun our comeback. We will return — to repair the damage and to pick up where our predecessors in our party left off — building, not destroying what has been created by the men and women who went before us.”

Rae introduced a motion of non-confidence, just as he done as a federal MP in 1979 to kill Prime Minister Joe Clark’s Progressive Conservative government. The PCs were defeated 72 to 52, and Miller resigned as party leader on August 20. His family believed that losing the election extended his life, as the pressure of the premiership might have caused another heart attack. Peterson was sworn in as premier during an outdoor ceremony at Queen’s Park on June 26 that was designed to demonstrate his government’s openness to the public. As promised, the accord with the NDP lasted for two years.

To Toronto Star journalist Rosemary Speirs, the demise of the PCs was “a clear illustration of the old political adage that governments are not defeated, they defeat themselves.” She noted that Miller’s inept campaign “roused public concern that he and his government were abandoning the moderate traditions of the past 42 years. The voters lost faith in the province’s long-time managers and began to look elsewhere.”