The weight of memory in Japanese-Canadian art

An exhibition at the Royal Ontario Museum brings together the works of eight Japanese-Canadian artists. TVO.org talks to three of them, from three different generations, about identity, inspiration, and the legacy of the internment
By Matthew O'Mara - Published on Mar 13, 2019
Detail from Steven Nunoda’s ROM exhibition piece “Ghost Town & Ladder to the Moon.” (Rebecca Rowley)

For many Japanese-Canadian artists, family research is a necessity.

When the federal government sent Japanese-Canadians to internment camps in the interior of British Columbia during the Second World War, communities were destroyed and families were separated. The lives and identities of the Issei and the Nisei — first- and second-generation Japanese-Canadians — were disrupted, causing reverberations still felt today.

“Most of us Sansei [third-generation Japanese-Canadians] don’t have Japanese names,” says Bryce Kanbara, co-curator of Being Japanese Canadian: Reflections on a Broken World, an exhibition at the Royal Ontario Museum that brings together works by eight Japanese-Canadian artists from different generations. “That’s the kind of experience that’s reflected in the works that the artists have created.”

The thread that connects art produced by Japanese-Canadians, Kanbara says, is the amount of research that’s gone into family histories. “Each of those artists needs to have come to that necessity of exploring their family’s past and their identities on their own,” he says. “It’s pretty clear that they’ve done a lot of soul searching at some point in their lives.”

TVO.org talked to three Japanese-Canadian artists from three generations about how family, memory, and history informed their works in the ROM exhibition. 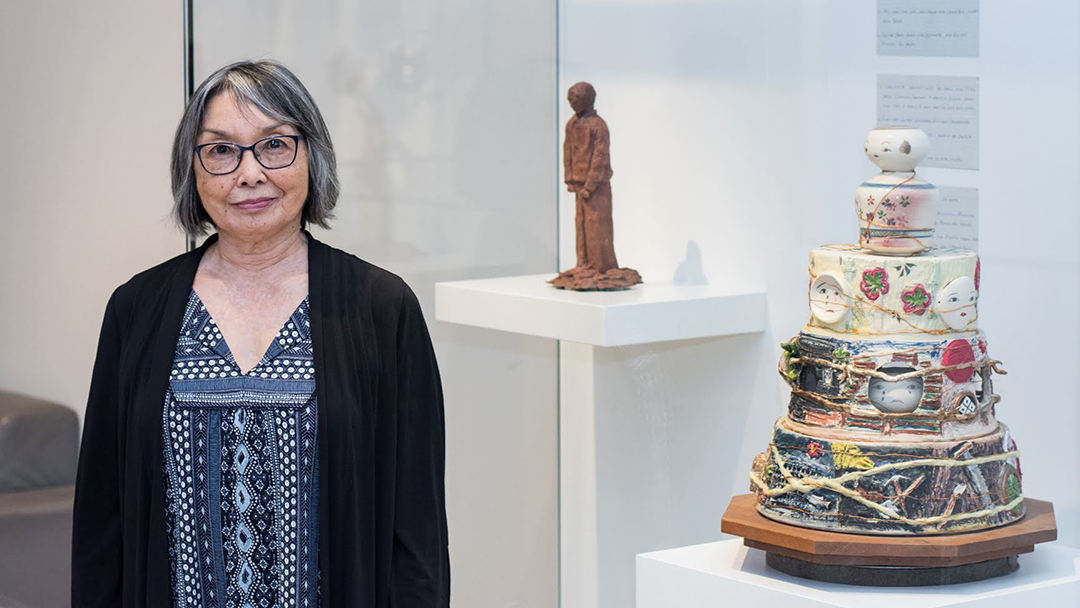 In 1981, Marjene Matsunaga Turnbull asked her aunts and uncles to tell her stories about her grandparents. Over the next 11 years, she collected these memories.

Then she baked a cake.

Turnbull’s “Continuum: A Japanese-Canadian Cake History,” a ceramic sculpture, is informed by the experiences of the first immigrants, who took jobs on the sea and in mines, of the internees forced to work on farms and in road camps, of those who fought for redress, and of the new generations rediscovering their identities. Each layer features objects related to each generation, such as sugar beets, a crop Japanese-Canadians harvested while interned on farms.

“The reason why I wanted to write the stories of my mom and aunts was so I could tell my children,” says Turnbull. “They would ask me questions, and I wouldn’t know what happened, so it was important for me to tell them, so that they can now tell their children.”

Looking around the gallery at the art on display, she says, made her feel empowered.

“I think they all pointed to the same thing: the experience of all the people who went through [the internment] and who are still affected by it,” said Turnbull. “It’s still felt by everybody.” 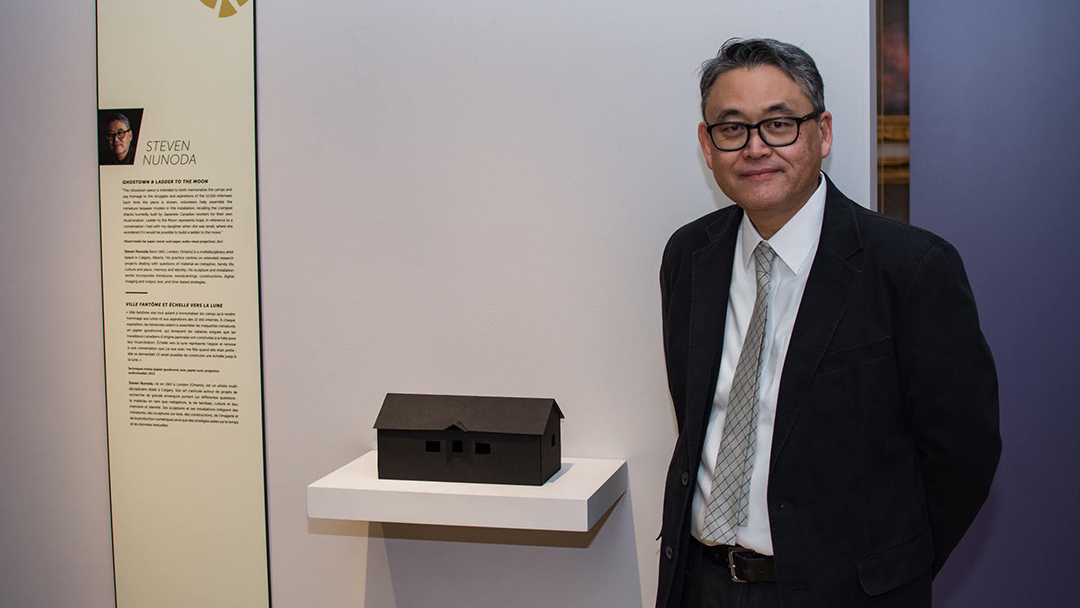 After his children began asking about the internment, Steven Nunoda became curious about what everyday life had been like in the camps. He began asking the older members of his family such questions as, Where was the sink? Where did you get water from? Was it from a lake or from a well?

He heard stories that gave him insight into the daily experiences of those who’d been interned at camps including Lemon Creek, Tashme, and New Denver.

“My having to deal with this topic, which was difficult in its own right, became a talking point in the family about what exactly happened,” says Nunoda.

His father told him stories of being trucked off to pick fruit, taking trips to visit friends in nearby camps, and what it was like to feel so isolated.

“The moment you got off the highway, you were in the wilderness,” Nunoda says.

Nunoda’s “Ghost Town & Ladder to the Moon” — which features row upon row of miniature shacks made from tarpaper, a material used to weatherproof the makeshift buildings in the camps — was born from stories about “ghost towns” such as Roseberry Camp, where the wood used to build the shacks was so green that it shrivelled during the first winter, leaving occupants exposed.

“Some people got a hold of some rolls of tarpaper and, rather than putting them on the outside, they put them on the inside,” Nunoda says. “You can imagine what it would be like with that smell of tar and the darkness, as well as the other hardships of the internment.”

Although Nunoda agrees that the theme of memory is one that’s often explored by Japanese-Canadian artists, he says that “the real value of the work is the conversations it starts.” 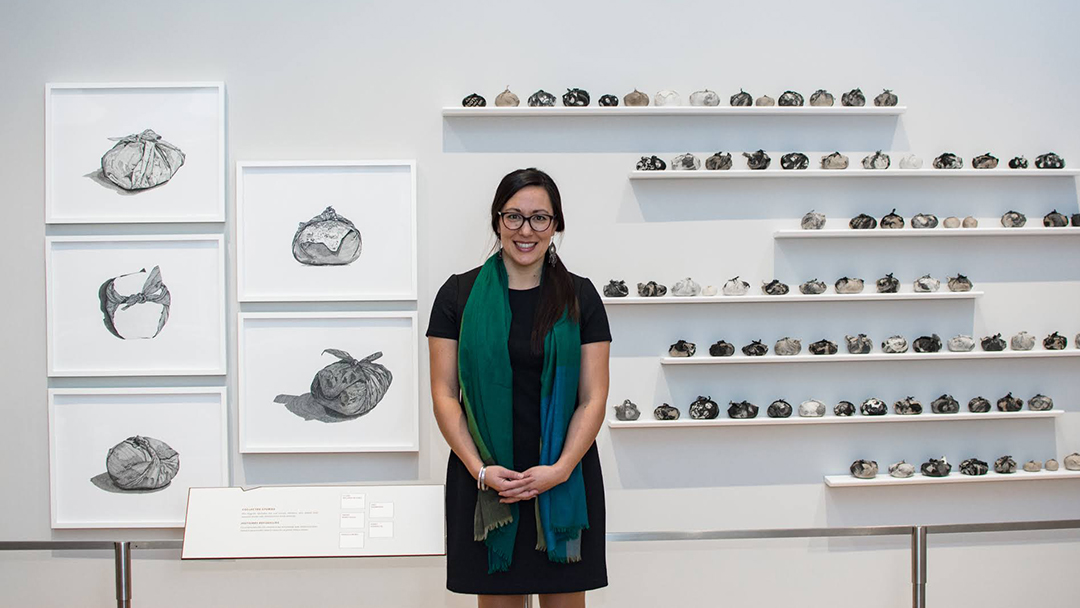 Emma Nishimura’s grandparents met while both were interned — her grandfather in Yard Creek and her grandmother in Slocan City, the same camp that features in Joy Kogawa’s Obasan.

“I reread Obasan when I was working on a piece and realized that what I thought had been my grandmother’s experience was really the main character in the novel’s experience,” says Nishimura, “which is really interesting in how we conflate these memories and stories.”

The novel tells the story of 36-year-old schoolteacher Naomi Nakane and what she learns about the internment through letters and the memories of her aunt Aya, whom she calls Obasan.

The sculptures that make up Nishimura’s “An Archive of Rememory and Collected Stories” explore the significance and weight of memory. Each is wrapped in a family photo; each resembles a heavy stone.

“But they weigh nothing,” says Nishimura. “How much does memory weigh, and how much does that weigh on us?”

Society
Time for a Four Day Work Week?
Can a shortened week be the answer to everything from productivity to fighting climate change?

Society
A Snapshot of Ontario Policing and other top stories
sfy39587stp16