The secret behind Brampton’s transit success

ANALYSIS: Public transit ridership is stagnating across North America, but in Brampton, it’s on the rise. Here’s why
By Sean Marshall - Published on Jan 08, 2018
The most visible enhancement to Brampton Transit in recent years has been Züm, a network of limited-stop express buses.

​Brampton, population 600,000, is a fast-growing city northwest of Toronto. It boasts a charming downtown core that predates Toronto’s post-war growth, but, like so many other suburban communities, it is made up primarily of subdivisions with single-family homes, big-box retail outlets, and business parks full of nondescript warehouses and industrial malls. Its wide, six-lane roads are jammed with cars and trucks. But Brampton has what most suburbs don’t: a thriving local transit system.

In October 2015, in a divisive 6-5 decision, Brampton City Council rejected provincial funding for a segment of the planned Hurontario-Main LRT that would have connected downtown Brampton — and its GO station — with Port Credit in Mississauga. The project had the support of Brampton’s mayor, Linda Jeffrey, but prominent residents, such as former Premier Bill Davis and members of the local business community opposed it, claiming the LRT would disrupt the historic downtown core and cause traffic congestion, and raising concerns about the cost of operation. Some observers, such as writer Noreen Ahmed-Ullah, saw the divisive vote as evidence of a conflict between Brampton’s older white establishment and its younger South Asian and Black residents. As things stand now, the light-rail line — which begins construction in 2018 — will terminate in Brampton’s south end, at Steeles Avenue. The city is now studying alternative, less direct routes to bring the light-rail line into the downtown core.

But when it comes to local transit, the city is exceeding expectations and bucking a worrying trend across Ontario and North America, where ridership is stagnating. In 2016, the Toronto Transit Commission’s ridership grew by only 0.1 per cent: in 2016, total ridership was 538 million. In Hamilton, ridership dropped by 1.8 per cent, or 435,000 trips, despite some service improvements. In Burlington, the drop was five per cent. MiWay (Mississauga Transit), GO Transit, and York Region Transit did see modest ridership increases, but in Durham Region — another fast-growing suburban area — ridership fell by 1.1 per cent.

This impressive feat cannot simply be explained by population growth. The city’s population increased by 13.3 per cent from 2011 to 2016: during the same period of time, Brampton Transit ridership increased by 41.6 per cent. 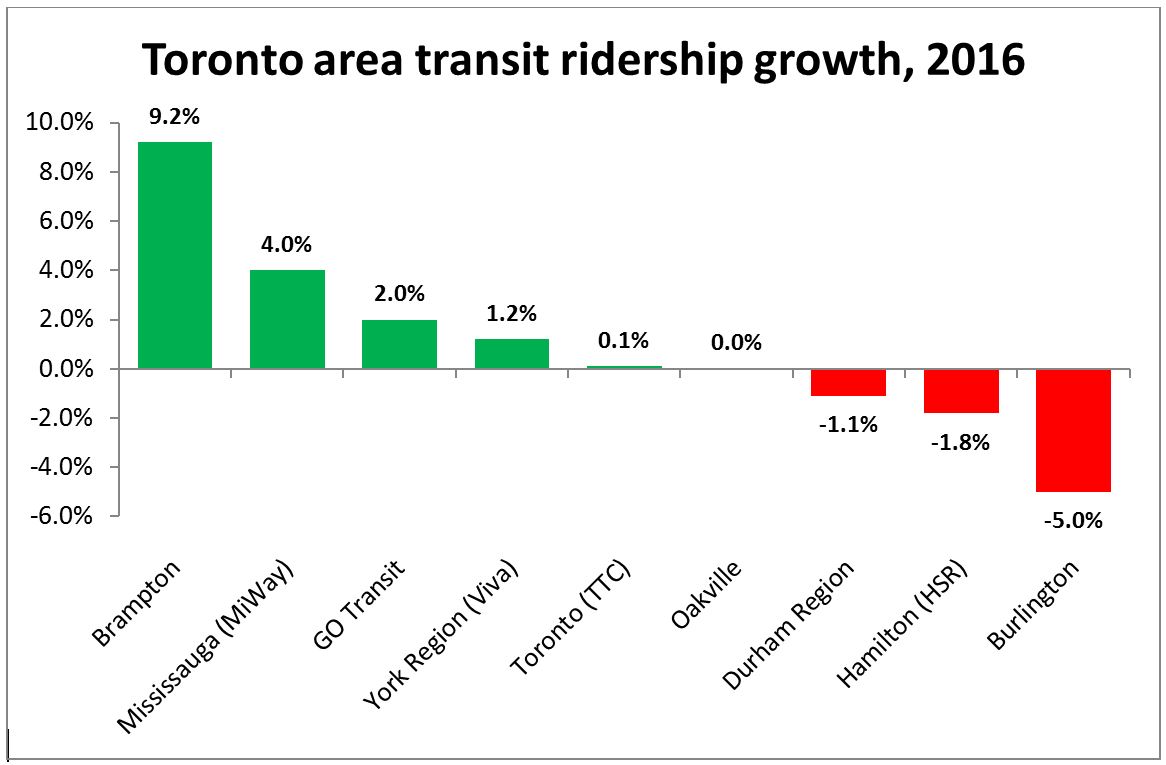 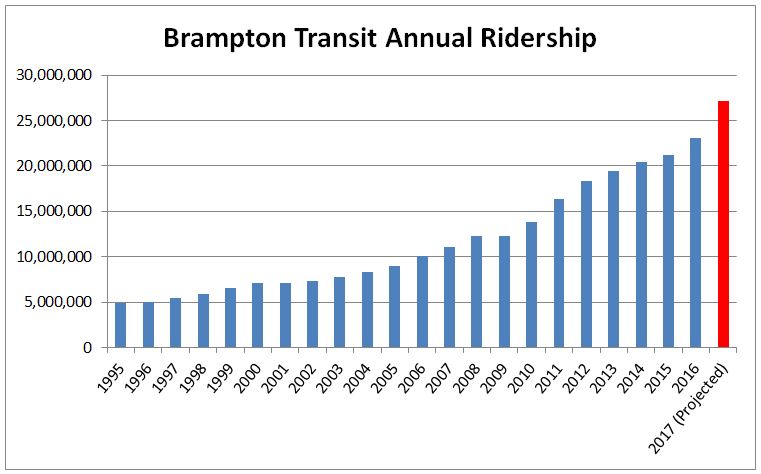 So why has Brampton Transit performed so well compared to its peers?

In the 1990s, Brampton Transit provided minimal service, making it easy for patrons to travel between shopping centres, but often using meandering loops to provide coverage to outlying areas. The annual ridership in 1995 was less than 5 million; the city itself was generally uninterested in providing effective transportation, beyond widening roads. Sunday bus service was introduced on a permanent basis only in 1998, and late-evening service on most major routes was non-existent. Connections to other transit systems, including those in Toronto and Mississauga, were minimal. In 2001, Brampton Transit operated 28 routes; only 11 offered Sunday service. 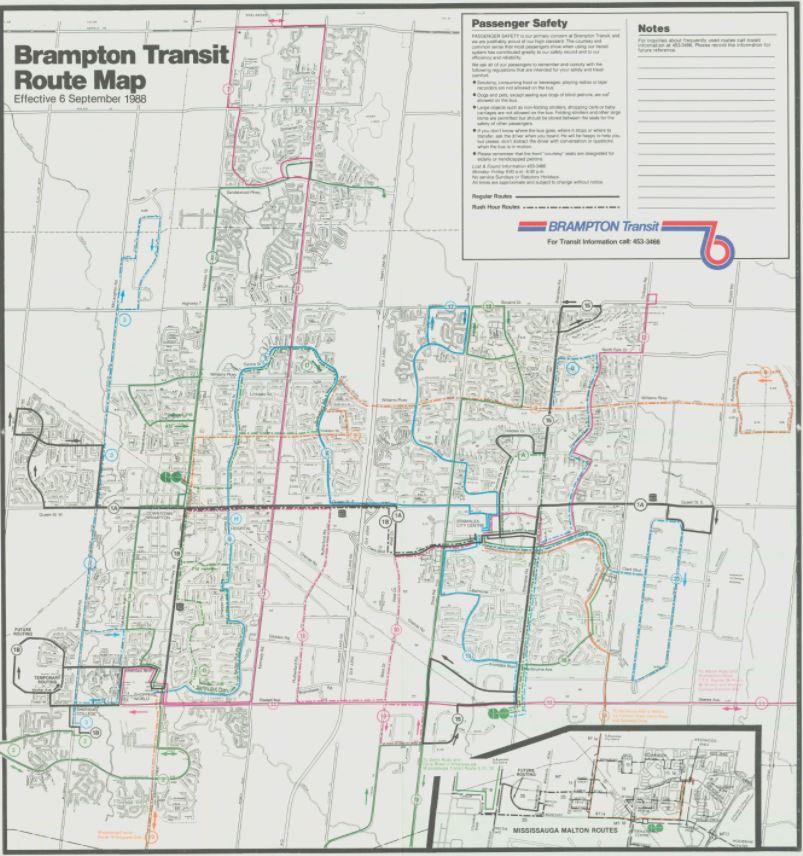 But in the early 2000s, city hall started to take transit more seriously and began boosting funding. In May 2005, Brampton Transit adopted a grid-based route system, straightening meandering routes, and introduced a two-hour transfer. In 2008, it introduced a new express route to Pearson Airport and improved service on base grid routes, ensuring 30-minute minimum frequencies, seven days a week. Bus routes are now added to new subdivisions as soon as possible to build ridership.

Of course, the most visible enhancement was Züm, a network of limited-stop express buses (sometimes referred to as bus rapid transit) that debuted on Queen Street in 2010.

New Züm routes were added to Main Street in 2011, Steeles Avenue in 2012, and Bovaird Drive in 2014. While Brampton lacks full all-day GO Transit rail service (it has long been promised, but has yet to be delivered), these new routes connect the city to major transit hubs — like Humber College, York University, and Mississauga’s Square One — that offer connections to GO Transit, and to the TTC and York Region and Mississauga routes. Today, Brampton Transit operates 419 buses on 50 bus routes. Thirty-two routes offer service seven days a week.

Further expansions are planned for the Züm network over the next four years: new routes will be added on Airport Road and Chinguacousy Road, and additional service will be introduced on the busy Queen Street route, which now, thanks to the opening of the extension to York University and Vaughan Metropolitan Centre, features a direct TTC subway connection. Buses will also be added to existing routes to meet growing demand. In 2018, 19 additional buses will be put into service; in 2019, another 18 will hit the road. The construction of a third bus garage is also being planned.

Brampton’s Züm service followed the lead of York Region Transit, which launched Viva — an express bus network that serves the major Yonge Street and Highway 7 corridors — in 2005.  Currently, York Region is spending $2 billion to build bus-only medians, called Rapidways, along those corridors to allow for faster service, but it has neglected to improve its conventional grid network, and made several cuts in 2016 and 2017 to local service in Vaughan, Aurora, and Newmarket.

If other municipalities want to repeat Brampton Transit’s success and reproduce its record ridership increases, the path forward is clear: Commit to transit expansion in the municipal budget. Offer more frequent service, and guarantee a minimum level of service on major routes. Provide useful connections to major transit hubs and post-secondary institutions, even if that means extending service well beyond municipal boundaries. Adjust service regularly to meet demand. And develop a network of rapid, reliable express routes, while at the same time ensuring there’s a strong local network to feed the express buses.

Brampton may have the reputation of being a suburban bedroom community, and its record of supporting transit may have been tarnished by its rejection of provincial LRT funding, but Brampton Transit is a success story that we should take notice of — and learn from.

Politics
What’s ON: The week that was in Ontario politics (January 17-21)
A new reopening plan, money for more housing, and debating what the premier should do in a snowstorm.
Daniel Kitts