The politics of abortion after Morgentaler

After the Morgentaler decision, Ontario’s approach was to treat abortion as a medical issue. The government made no attempts to block access, either through funding or physicians and facility restrictions; indeed, the addition of abortion to other health care responsibilities in the province was almost routine. When contrasted with other provinces, extensive litigation and legislative debate on the topic is noticeably absent.

The medicalization of abortion – that is, treating abortion as a solely medical issue insulated from social and political concerns – has allowed for the creation and maintenance of reasonable access for many Ontarians, but others continue to face barriers in their attempts to access care. Even though access is quite good in large urban centres, rural access to services continues to be a problem. In a province as large as Ontario, both geographically and in terms of population, such a disparity is noteworthy. Treating abortion as a health care procedure has largely obscured the centrality of services to women’s citizenship.

Political and legal activity surrounding abortion access issues in Ontario has been markedly less prevalent than in New Brunswick, effectively ceasing after the Morgentaler decision. Nonetheless, the activity that has taken place in the province has been instrumental in shaping the landscape of abortion access in Canada today. Although the Ontario government has never overtly stated that the provision of abortion services is necessary for women’s equality, provincial regulation treats abortion as a health care issue and, at least in this respect, access is widely thought of as a right. 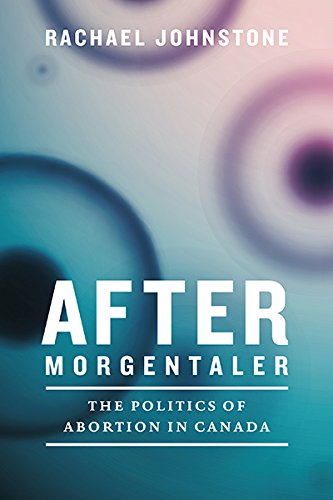 The 1988 Morgentaler decision originated from a legal challenge in Ontario, where Morgentaler opened a clinic in 1983, when abortion was still regulated under section 251 of the Criminal Code. When abortion was decriminalized ﬁve years later, the Ontario government was compliant with the ruling, treating abortion as a matter of health. Coverage for abortion services was included in the provincial health-insurance program for both hospitals and clinics.

In the midst of these changes, a small amount of overt anti-abortion sentiment was vocalized in the Ontario legislature. This sentiment was only apparent in the years following the Morgentaler decision, when abortion was still being debated in the House of Commons. Liberal MPPs Carman McClelland and Michael Murray Dietsch, for example, both spoke out in February 1988, encouraging the federal government to create new legislation “to provide protection for the unborn.” However, these views did not seem to be widely held, and abortion has rarely been a topic of debate in the legislature, except for one notable Ontario court case: Murphy v. Dodd (1989).

This case, which was the Ontario equivalent of Tremblay v. Daigle, concerned an Ontario man, Gregory Murphy, who sought an injunction to prevent his former partner, Barbara Dodd, from getting an abortion. Murphy claimed to be the undisputed biological father of Dodd’s fetus, despite his knowledge that she had been intimate with another man. He also signed a sworn aﬃdavit that he had “conferred with Ms. Dodd’s gynecologist who was of the opinion that a ‘third abortion’ could represent a serious risk to [Dodd’s] life’ while ‘a pregnancy did not constitute such a risk to her’” Dodd subsequently provided “an aﬃdavit from her doctor who swore that the alleged conversation never took place." Ultimately, since the injunction was granted on fraudulent grounds, the case never went to court. The injunction, however, was an area of contention in the legislature.

In response to the court’s decision to grant Murphy an injunction, NDP MPP Richard Frank Johnston stated that it was “an outrage to women in the province [and] an aﬀront to their sense of autonomy” that “a third-party male should be able to make a decision which would hamper a woman’s right to have an abortion,” calling the decision a “reversion to notions of women as chattels.” In response, Liberal MPP Dalton McGuinty reiterated the Morgentaler decision’s allusion to “the need to achieve the socially imperative balance between the rights and interests of women and the equally important rights and interests of unborn children.” Despite these passionate reactions to the case, the use of a language of rights appears only in these isolated statements. Neither a strong pro-choice nor anti-abortion position has been pushed in the Ontario legislature, which continues to remain relatively neutral on these debates, attempting to treat abortion as a straightforward medical question.

In general, abortion has become a virtual non-issue and is rarely raised in provincial politics. When it is discussed, concerns regarding the way abortion is regulated in the province have tended to focus on the distribution of services. The greatest political concerns in the province pertaining to abortion access relate to deregulation of services and the enactment of policy at a service level. The actions of Mike Harris’s Progressive Conservative government are a prime example.

In 1995, the Harris government took dramatic steps to curb healthcare spending, delisting many services, particularly those dealing with quality-of-life issues. Michelle Robidoux, manager of the Ontario Coalition of Abortion Clinics (OCAC), spoke about these cuts in an interview:

"Several years ago, the Ontario government delisted a whole range of procedures, ranging from reversal of tubal ligation to removal of port wine stains that people are born with to the provision of prosthetic testicles for men who have testicular cancer. Small, cosmetic things that can make a diﬀerence for a person who is in that situation – and they just cut it. We saw it very much as part of a process of whittling away at things that are considered part of essential health care."

Robidoux went on to deﬁne essential health care as procedures that are necessary to deﬁning “your sense of yourself as a person” – that is, “your mental health, as well as what’s immediately necessary.” The anti-abortion movement, however, continues to see abortion as falling outside the realm of essential health care.

Anti-abortion groups in the province have tirelessly reiterated their belief that abortion is not a necessary medical service. Consequently, there is fear that abortion care could also face funding cuts, particularly if the politicians masterminding these decisions are anti-abortion. Indeed, Robidoux identiﬁed this kind of potential attack on abortion services, which has already manifested in New Brunswick, as part of a greater challenge to “what’s seen as a right, what kind of healthcare is seen as your right, and what’s seen as your private responsibility, or a luxury, or trivial.”

This push by anti-abortion groups to reframe abortion as a lifestyle issue – a procedure of convenience, chosen frivolously by women – rather than as a medical issue or a right has been a major area of concern for abortion rights advocates. Pro-choice advocates feared that abortion might also be delisted. In the end, the Harris government abstained from cutting abortion, but attempts by social movements to redeﬁne what constituted a necessary medical service exposed the potential pitfalls of relying on a rigid healthcare framework to realize women’s equality.

An expert panel on abortion service provision in Ontario, assembled by Echo, an agency of the Ministry of Health and Long-Term Care with a focus on women’s health, underscored concerns that abortion services in the province are vulnerable. As a result of healthcare reforms that shifted from a model relying on hospitals to one relying on clinics, concerns arose that abortion services and their importance have become “poorly understood and [are] dependent upon a relatively small group of providers." Without formal recognition as a right, provinces are largely free to treat abortion like any other health care service. The report made several recommendations based on continued stigma around the procedure, including improvements to the system of reproductive healthcare designed to increase the quality of services, and better training for providers to ensure their “alignment and adherence to [the] ethical and legal obligations” they must meet as healthcare professionals.

Despite concerns about delisting, limited facilities, and a lack of providers, interviewees in the province generally perceived access to be quite good. This is in no small part owing to the stability of abortion provision in Ontario, which has meant that individuals within the province generally feel that access is relatively secure. Interestingly, when interviewees in Ontario articulated their concerns for the future of abortion access in the province, they were most often focused on external threats rather than provincial; namely, the actions of the federal government.

The inﬂuence of the Harper government, in power at the time the interviews were undertaken, was widely cited as a concern by interviewees in the province. The increasingly vocal anti-abortion sentiment in the federal government seemed to overshadow issues of provincial politics. For instance, a representative of Planned Parenthood Toronto explained that, although in previous years the organization felt relatively secure in the notion that abortion access was “here to stay,” the Harper federal government has threatened this view. “Within the political atmosphere,” she elaborated, “a lot of the political leaders still see it [abortion] as murder, and they still see it as wrong.  It’s always going to be jeopardized as long as there are people with that mentality running the country.” Robidoux echoed this sentiment, stating that she believes the Harper government had “quite uniform and quite dominant opposition to abortion in their caucus.” She drew particular attention to the role of Conservatives in anti-abortion legislation, relating that on recent backbencher bills designed to restrict women’s rights to abortion, “the bulk of the people who voted for those laws were Conservatives.” Even though the “Conservatives stand out on the political landscape” in terms of anti-abortion policies, Robidoux did not express trust in the Liberal Party either. She explained that, “historically, the laws that existed which restricted abortion were probably in place as long under Liberal governments as they were under Conservative governments,” stressing that she does not “have any great faith that we are protected from such things just by the fact of a Liberal government.” She did, however, clarify that although she had no “conﬁdence that the Liberals have a strong commitment to it [abortion access], in the sense of really ﬁghting for it,” the Conservatives were of particular concern because they are “really, really opposed to it.”

The absence of enforceable rights to abortion access for women is an ongoing concern in Ontario, despite the absence of any provincial restrictions on the procedure and virtually no litigation since R. v. Morgentaler (1988). Keeping abortion strictly within the realm of healthcare has left it vulnerable to cuts and disputes over what constitutes a medically necessary service. It also leaves the regulations of the procedure largely outside provincial politics, since non-state actors chieﬂy control the training of future providers and the inclusion of abortion in medical school curriculum. Although abortion is a healthcare service, its taboo status has meant that it is not always treated as such. Thus, in spite of Ontario’s policies being far from regressive, without formal recognition of abortion as necessary to women’s equality, women’s rights remain at the discretion of doctors rather than women themselves.

Excerpted with permission from After Morgentaler: The Politics of Abortion in Canada by Rachael Johnstone, 2017, UBC Press, Vancouver and Toronto, Canada.