The pioneering life of Lincoln Alexander

We know so much about American history, but we barely recognize the names of Canadian civil rights leaders. Here's the story of one
By Nam Kiwanuka - Published on January 19, 2017
Lincoln Alexander inspects an honour guard prior to the speech from the throne at Queen’s Park, April 22, 1986. (Bill Becker/CP)

1968 was a pivotal year in the fight for civil rights in the United States. The world was rocked with the news when the civil rights leader and Nobel Peace Prize winner Martin Luther King Jr. had been assassinated. In the week that followed his murder, riots erupted in 125 cities across the country with damages in the millions. Later that year, two Black Olympians protested the country’s racial discrimination when they raised their fists while standing on the medalists’ podium during the national anthem — a simple act of defiance that was later condemned by the IOC. At a press conference following the protest one of the medalists, Tommie Smith, said: "If I win I am an American, not a Black American. But if I did something bad then they would say 'a Negro'. We are Black and we are proud of being Black.”

North of the border in Hamilton, history was also being made, though it's a history far fewer of us know about. Lincoln Alexander became Canada’s first Black Member of Parliament, elected to represent Hamilton West for the Progressive Conservatives.

It wasn’t the first time Alexander had been the first — and it wouldn’t be the last time, either.

This past week as the world celebrated what would have been King’s 88th birthday, I realized that Alexander’s birthday was in the same week. In fact, January 21 is Lincoln Alexander Day. How did I not know this? As I followed the coverage of King’s accomplishments on social media, a friend and fellow journalist, the CBC’s Adrian Harewood, tweeted: 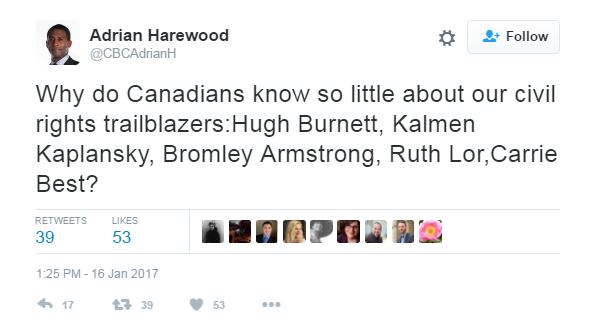 As I read through the thread, names popped out that I had never heard of. I started Googling. I learned that Hugh Burnett was a carpenter from Dresden and founded an anti-discrimination group in 1948. Kalmen Kaplansky was known as “the zaideh [grandfather] of the Canadian human rights movement.” Bromley Armstrong is a Black trade unionist who played a key role in campaigns that would later lead to the creation of Canada’s first anti-discrimination laws. Ruth Lor Molloy, a Chinese-Canadian, protested alongside Armstrong and Burnett during the Dresden sit-ins. Carrie Best was a journalist and human rights activist.

During a time when their abilities and capabilities were dismissed because of their ethnicity or skin colour, these men and women played significant roles in creating a country that’s considered one of the most diverse and equitable in the world — yet most of us don't know their names or accomplishments.

Recently the Bank of Canada announced that Viola Desmond would become the first Canadian woman to appear on a bank note — the $10 bill — starting in late 2018. Desmond was a successful businesswomen from Nova Scotia and was thrown out of a movie theatre in 1946 when she sat in a whites-only section. Jailed and fined, she decided to take her case to court and became the first Black woman to launch a legal challenge of racial segregation in Canada.

While many Canadians didn’t know who Desmond was when the announcement was made, some have come to refer to her as Canada’s Rosa Parks, even though Desmond took a stand against racial segregation nine years before Parks refused to give up her seat. In a blog post titled "VIOLA ISN'T ROSA: Viola Desmond & The Erasure of Black Identity," writer and activist Bee Quammie writes:

“The lack of knowledge about the history of Black people in this country is a contributing factor to our 'othering' — when you aren’t taught that you have a solid foothold in the development of this country, it’s that much easier to feel like the Canadian identity (whatever that looks like) doesn’t belong to you. We didn’t all arrive here thanks to former PM Pierre Trudeau — Black people have existed and contributed to this land for generations, and our stories deserve to be told and learned about by all Canadians.”

Quammie further explains that while Parks had been involved in activism prior to her famous arrest for keeping her seat on an Alabama bus, Desmond had not. She took an independent stand, and her courage helped to forge a new path in the fight for equality in Canada. This isn't to say one was better or stronger or more important than the other, but that they were each individuals, and in lumping them together we do both a disservice.

Desmond's fight was a significant step along our path toward creating a more equal society. In choosing her, the Bank of Canada took another step, saying it was time “to break from tradition and feature other prominent Canadians who have made their mark on the history of our country.”

It’s important to note that it’s not just the accomplishments of Black Canadians missing from the history curricula. Until recently, many Canadians knew little about our country’s residential schools, which have created a legacy of intergenerational trauma within First Nations communities. I didn’t learn about residential schools or the Indian Act in high school or at university, for instance, but when I joined Twitter.

The Truth and Reconciliation Commission of Canada has recommended that provinces and post-secondary education organizations teach Indigenous history to Indigenous and non-Indigenous people alike. Last January, Historica Canada (a group that raises awareness about Canadian history) released The Canadian History Report Card. It acknowledged that the “perspectives of Aboriginal peoples are significantly lacking in the curricula of many provinces” and that our education system “must enhance the perspectives of ethnic minorities, women and immigrants. Curricula should acknowledge that Canadian history is made up of diverse voices. All students, regardless of their ethnicity or gender, should be able to 'see themselves' in the history curricula of their province or territory”.

While Ontario was rated as having the strongest history curriculum among all the provinces and territories, the report card found the province’s Grade 10 course tried to cram too much history — roughly 95 years — into one course. It also noted that “while Ontario attempts to include diverse perspectives into its social studies curricula, it neglects regional history” and that students should “have a greater opportunity to learn about Ontario’s past and its connection to the country, as well as to the world.”

Voted the Greatest Hamiltonian of All Time by readers of the Hamilton Spectator in 2006, Lincoln Alexander’s path began in kindergarten, when he was the only Black student. He became the first in his family to pursue a post-secondary education. At Osgoode Law School, he was the only Black student in a class of 260. Not only was he the first Black MP in Canada, he was re-elected four times and became the first Black cabinet minister in 1979 under the government of Joe Clark. And in 1985, he was named the province’s first Black lieutenant-governor, a post he held for six years. Alexander also went on to make history as the University of Guelph’s longest serving chancellor; to honour this accomplishment he was later named chancellor emeritus.

When Alexander died, then-lieutenant-governor David Onley announced his passing, saying, “Lincoln Alexander did not belong exclusively to Hamilton. He was a Canadian icon, recognized far and wide as a man who made a unique contribution to Canada and to Ontario. At a time when racism was endemic in Canadian society, he broke through barriers that treated visible minorities as second-class citizens, strangers in their own land.”

As he reflected on his life in the documentary, he concluded, “My life has been very interesting. Very varied, very hurtful. Very wonderful, very exciting, very disappointing but on balance, I’m the winner. And I’m a proud Canadian.”

Lincoln Alexander Day is observed on January 21 across Canada.

Correction: An earlier version of this article stated that Lincoln Alexander was re-elected to the House of Commons three times. He was actually re-elected four times.

Society
‘We have to set the example’: How London is trying to tackle anti-Black racism
Roundtables. Liaison. Community consultations. The city is developing a strategy — but activists say they’re not seeing quick and decisive action.
Mary Baxter
Society
Perdita Felicien: Hurdling Through Trial and Triumph
Society
Ep 2 - Queen Victoria and her Nine Children
Society
Asher Hill: Breaking Barriers on the Ice
sfy39587stp16