The numbers are in, and the Liberals are in trouble

ANALYSIS: Political pollsters agree on at least one thing — as 2018 gets rolling, you’d rather be the Tories than the Liberals, writes John Michael McGrath
By John Michael McGrath - Published on Jan 18, 2018
Kathleen Wynne is historically unpopular for a leader seeking re-election. (Chris Young/CP)

​As the province’s political parties gear up for the June 7 election, they know only a few things for sure: Premier Kathleen Wynne is extremely unpopular; the $14 minimum wage isn’t; and plenty of voters are in the mood for a change.

Five months is a long time in politics, and the Liberals will have plenty of opportunities to fight their way back into the lead. But the task ahead of them is daunting, if the polls are anywhere close to right. Here’s what the most recent polls have to say about the relative party standings. 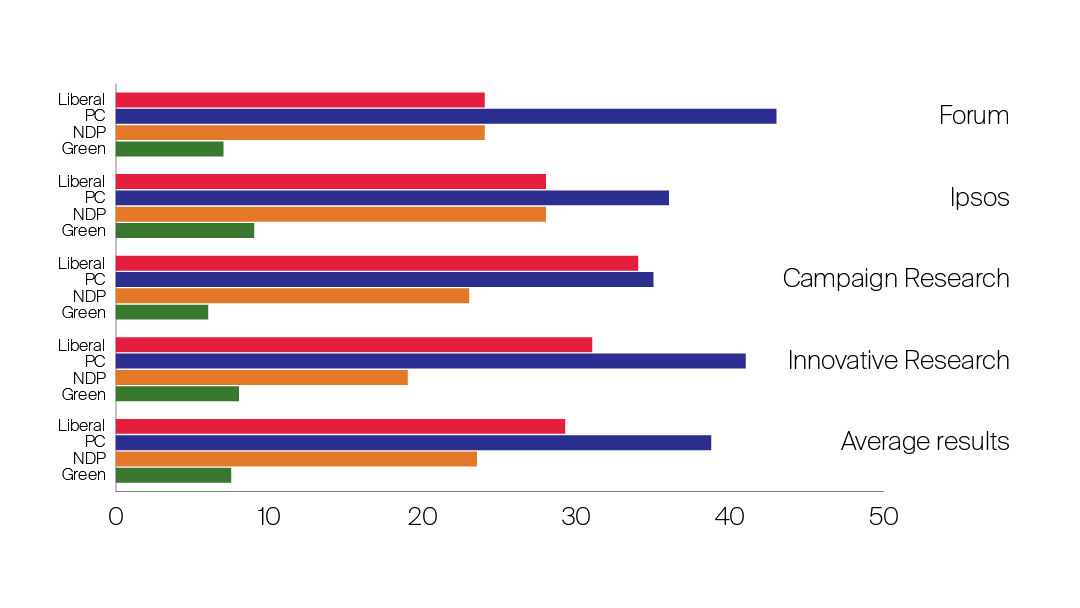 Ontarians were polled by Innovative Research Group in November, Ipsos in December, and both Forum and Campaign Research in January. Forum is continuing to show the largest lead for the Tories — at the end of January, it will have been three years since the Liberals held a lead in any Forum poll of provincial voters. But Ipsos and Innovative Research both show the Tories substantially ahead, by 8 and 10 points, respectively.

(Note: Innovative Research published two sets of results — one that includes undecided voters, and one that doesn’t. We’ve used the numbers for decided voters to ensure consistency.)

While Forum’s numbers show the largest lead for the Tories, it’s worth noting that the average of all polls doesn’t change substantially if Forum is removed: 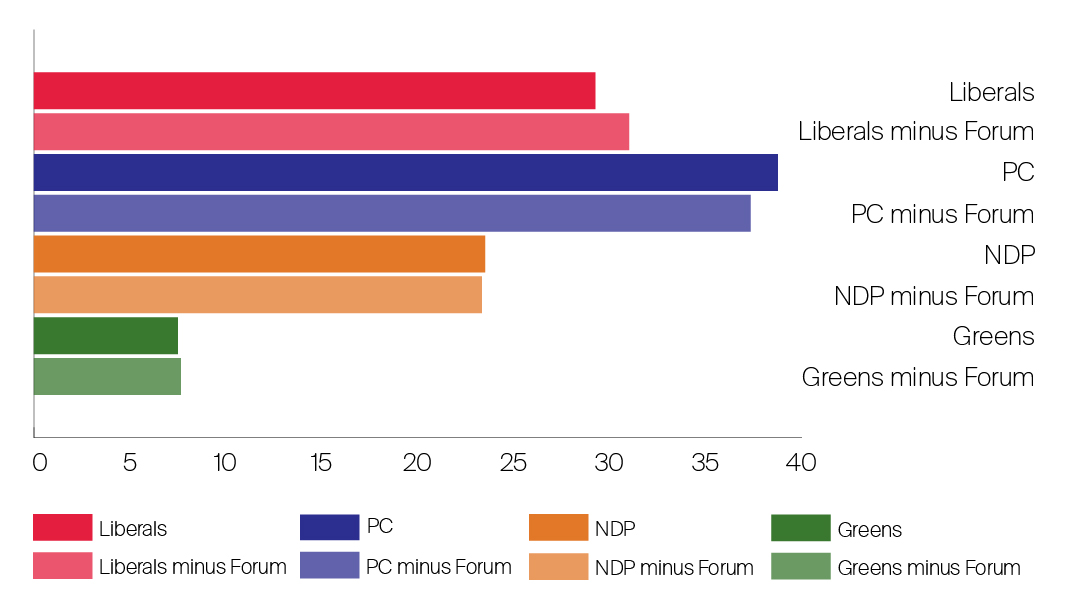 And by the same token, removing Campaign Research from the average would make the Tory lead look even wider. In short: if you’re running to become or stay an MPP in June, you’d prefer to be flying the blue banner based on these numbers.

Campaign Research offers the most hope for the Liberals: it shows the governing party effectively tied in support with the Progressive Conservatives, and it points toward what is working for them. Two progressive policies the government implemented on January 1 — the $14 minimum wage and free prescription drugs for people under 25 — have opened the door for at least some voters to switch their support to the Liberals.

“I think anything to do with health care, perennially the most important issue for Ontarians, is generally very well received by the electorate,” says Eli Yufest, CEO of Campaign Research. “And when it comes to kids’ health, it’s proven to be extremely popular.”

The popularity of the minimum wage is one of the few things that most polls agree on. According to Campaign Research, the Liberal youth pharmacare program is even more popular: 72 per cent of all voters — including 60 per cent of self-identified Tories — support the plan. Campaign Research estimates that 2 per cent of Tory and NDP voters may jump to the Liberal banner because of the minimum wage, while 6 per cent could be persuaded because of OHIP+. Those margins may not sound terribly impressive, but remember that the Liberals won by a margin of only 7.4 in 2014 and 2.2 per cent in 2011. The 2018 election may well also be decided by a thin margin. If the Liberals do manage to prevail, they’ll be able to point to OHIP+ as one of the things that put them over the top.

The big question is whether voters will be able to get over their dislike for Wynne. There’s no nice way to put this: the Liberal leader is historically unpopular for a leader seeking re-election. Forum CEO Lorne Bozinoff says Wynne’s unpopularity explains most of her party’s trouble in the polls. Most worrisome for the Liberals is that her own party isn’t foursquare behind her, either in Forum’s results or in other polls.

“Typically, within a party, the leader has a 90 per cent approval rating,” Bozinoff told TVO.org this week. “For Wynne, it’s like 70. It’s way off track.”

(Ipsos, Forum, and Campaign Research all show that between 30 and 36 per cent of self-identified Liberals disapprove of Wynne’s job performance. There’s no comparable dissatisfaction with Patrick Brown or Andrea Horwath within their respective parties, despite complaints from some Tories over the party’s nomination processes.)

“When a government’s been in power for 14 years, there’s a lot of baggage… it accumulates over time,” Bozinoff says.

Forum’s may not even be the most damaging assessment of Wynne. Ipsos’s poll from December found that 80 per cent of Ontarians think it’s time for a change in government. And only 26 per cent of respondents strongly or somewhat approve of the job the Liberals are doing under Wynne — slightly lower than the approval rating Bob Rae’s NDP government had before being wiped out in the 1995 election.

Ipsos also suggests that there’s hope for the New Democrats under Andrea Horwath. Multiple polls have found that Horwath is the most popular of the three party leaders and ranks highly when Ontarians are asked who would make the best premier, but to date, the New Democrats have failed to turn that into success at the voting booth. She is, though, well ahead of where Bob Rae was in 1990 when his party won a surprise victory.

It would be foolish to write off the Liberals at this point: as CBC’s Éric Grenier noted last year, the Liberals often pick up support as election day nears. Campaigns matter, and the Liberals have profited handsomely from the errors of their adversaries in the past. But at least so far, PC leader Patrick Brown has avoided any serious missteps. (And if Forum is right, the Tories could lose half of their current lead and still form a minority government.)

But a poll is only a snapshot of voter intent at one moment in time, and some of these polls are no doubt already out of date. The spring budget will almost certainly contain something intended to woo voters back to Team Red — a further expansion of pharmacare? Quebec-style subsidized daycare? — but there are no guarantees in politics: Forum’s Bozinoff notes that the minimum wage is popular but that support is polarized along party lines: Liberal, NDP, and Green voters are massively in favour of it, while more than half of Tories either somewhat or strongly disapprove. Tory voters are also more likely to say the higher minimum wage will hurt, not help, the provincial economy. In short, even broadly popular policies may not actually move the needle much on voter intent.

We’ve already seen the Liberals make other moves in preparation for the coming election —Wednesday’s cabinet shuffle, for example. And there will be more to come. MPPs return to the legislature in roughly a month’s time, and it’s going to be a busy spring.