The Liberals think hydrogen trains are the future — but what if they're wrong?

ANALYSIS: Metrolinx has ordered hydrogen-powered trains for GO Transit. But even the companies eager to sell them can’t promise they’ll actually work, writes John Michael McGrath
By John Michael McGrath - Published on Feb 23, 2018
The GO RER plan requires electrifying the diesel trains that have been the traditional workhorses of the GO system. (Stephen C. Host/CP)

​The government’s latest report on the feasibility of new train technology devotes seven pages just to explaining the acronyms used in the text. That’s before getting to the introduction or the executive summary. Nobody has ever complained that government makes it too easy for the public to understand the decisions made on our behalf, and nobody’s going to start today.

Which is a shame, because the government’s latest announcement has important implications for how Ontario is going to spend $21.3 billion revamping the train network that’s the backbone of the province’s regional transit system. Instead of just funnelling passengers into downtown Toronto in the morning and back out to the suburbs at night, GO Regional Express Rail (or GO RER) will feature multiple trains running into and out of the city daily by 2025.

On Thursday, the government announced it was contracting with train makers Alstom and Siemens to design a hydrogen-fuel-cell-powered locomotive to replace GO’s current diesel locomotives. If Metrolinx likes the resulting prototypes, it’ll try them in real-world tests on the existing train network, which could potentially lead to the government adopting them system-wide as a clean, efficient form of propulsion.

If everything goes right.

The GO RER plan has always required electrifying the diesel trains that have been the traditional workhorses of the GO system. Until last year, it was assumed that would mean electrification the way it’s been done literally everywhere else in the world: with overhead wires feeding electricity to electric trains. Electric trains can be smaller and cheaper than massive diesel-powered locomotives, and they can start and stop more quickly, meaning they can safely zip in and out of stations more frequently.

Indeed, the advantages of modern electric trains are so obvious that when Metrolinx was originally putting the plan for regional express rail together, it deemed other forms of train to be unsuitable for the level of service it’s imagining for 2025 and after. Electric trains are relatively well-understood technology: they’ve been used in all places that are serious about rail transit, and there are a number of reliable global vendors that could potentially sell the government what it needs.

Not a single part of that last sentence is true for hydrogen trains: they’ve never been used on the scale Metrolinx is planning; the technology has only been adopted incrementally in one part of Germany so far; and there’s only one vendor with a train even close to market readiness.

There are a number of questions about hydrogen trains. Unfortunately, Thursday’s announcement didn’t offer a lot of answers.

Is Metrolinx confident that hydrogen rail (or “hydrail,” as the industry insists on calling it) can actually meet the performance targets the RER plan requires? It doesn’t know yet, but hopes the prototypes from Siemens and Alstom will provide an answer.

One obvious issue that needs to be addressed is whether a fuel-cell train will be powerful enough to haul the heavy passenger cars Metrolinx currently uses.

“That’s the big challenge,” said Metrolinx CEO Phil Versters. “If you need more power to get the right ratio, maybe you have to make sacrifices in other areas —10, 15 per cent less seating capacity, perhaps. That’s the type of challenge the industry is struggling to get their head around.”

(Toronto transit advocates dealing with the city’s dangerously overcrowded subway system may well be grinding their teeth at the idea that Ontario could blithely choose to give away 15 per cent of its ridership capacity in order to buy the shiniest new train technology.)

There’s also the basic environmental question of how much cleaner these hydrogen trains will actually be. Much of the bill for GO RER electrification is being funded by the Liberal cap-and-trade carbon-price system (or, until earlier this month, a federal carbon tax that was, ahem, part of the Progressive Conservative platform). The point isn’t just to carry more passengers than the current train network — it’s to do so while massively reducing climate-altering CO2 emissions.

Hydrogen trains will likely be cleaner than diesel under any circumstances, but it’s not just environmental angels pushing the government to look at hydrogen: natural gas companies like Enbridge are also big fans, since methane is currently the most economical source of hydrogen around. McGarry acknowledged that the government hadn’t made a decision yet about whether  it would restrict the province’s hydrail plans to cleaner forms of hydrogen, such as using renewable (or nuclear) energy to extract hydrogen from water.

Finally, there’s the more obvious pocketbook concern: Is Metrolinx confident that this won’t leave taxpayers on the hook for an untested new technology? Well, it intends to protect taxpayers with a public-private-partnership (P3) structured to make sure that private contractors, not the government, bear the risk of cost overruns or project delays. Except 2018 hasn’t been kind to P3s in the news, and it’s still only February: in the United Kingdom, the country’s largest P3 contractor imploded last month, leaving employees there scrambling as the Canadian subsidiary went into creditor protection. At least as concerning, a P3 arranged by Infrastructure Ontario for Ottawa’s light-rail line left a big enough loophole that the contractor in that city will miss its May 2018 deadline without the city collecting the $1 million fine it was supposed to be entitled to.

That leads to an uncomfortable but obvious question: the government relies on P3s to prevent situations like the one in Ottawa, and it happened anyway. The risks are much, much larger in the case of the government’s rail plans ($21.3 billion for GO RER vs. $2.1 billion for Ottawa’s LRT line), so how can taxpayers be confident that they’ll be protected from the downside risk that a new and untested technology represents?

Minister of Transportation Kathryn McGarry said she’s “very confident” that Metrolinx and the companies working with it to test the waters on hydrogen technology won’t leave the government high and dry.

“It’s precisely why we’re moving forward right now with this kind of contract. We are asking our industry to do so in a conceptual way to see if it’s really feasible to use hydrogen-fuel-cell-powered trains,” McGarry said. “There are other jurisdictions that are moving in this direction in other parts of the world, and I want Ontario to be a leader here.” 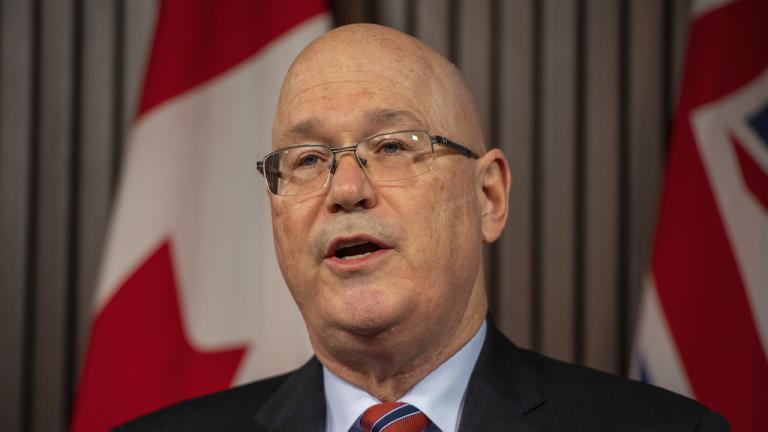