The high cost of food on First Nations reserves

EXCERPT: Living on Kashechewan First Nations reserve in northern Ontario, Alexandra Shimo experienced what life is like with an insufficient — and expensive — food supply
By TVO Current Affairs - Published on Jan 19, 2017
Goods at the Indigenous-run stores in Kashechewan are much cheaper than at the Northern Store — sometimes the same prices as in Toronto. (Photo by Alex Shimo. Courtesy of Dundurn Press)

Journalist Alexandra Shimo lived a few months in Kashechewan, intending to write about unsafe water in the northern Ontario First Nations community. But she discovered problems way beyond the water supply. During her stay, she struggled to understand the poverty, suicide pacts, and food insecurity — all of which started to affect her physical and mental health. Invisible North is a portrait of Kash, set in the greater context of Canada’s historical policies and treatment of Indigenous people. Shimo also provides personal reflections as she tries to adapt to reserve life. In the following excerpt, she describes her first trip to the Northern Store, where she encounters outrageous food prices.

The Northern Store is unlike any I’ve visited. It sells everything that one needs for life up north: cans of tuna fish are crossways from ATVs, heads of lettuce near canoes. When the stores first opened in the late 17th century, these goods were purchased with furs. In 2009, the shop stopped accepting them, according to trapper bobby Wynne, 46; today most send their furs by mail to places like North American Fur Auctions, then spend the money at the Northern. It’s more of a hassle, but it means that they get a better 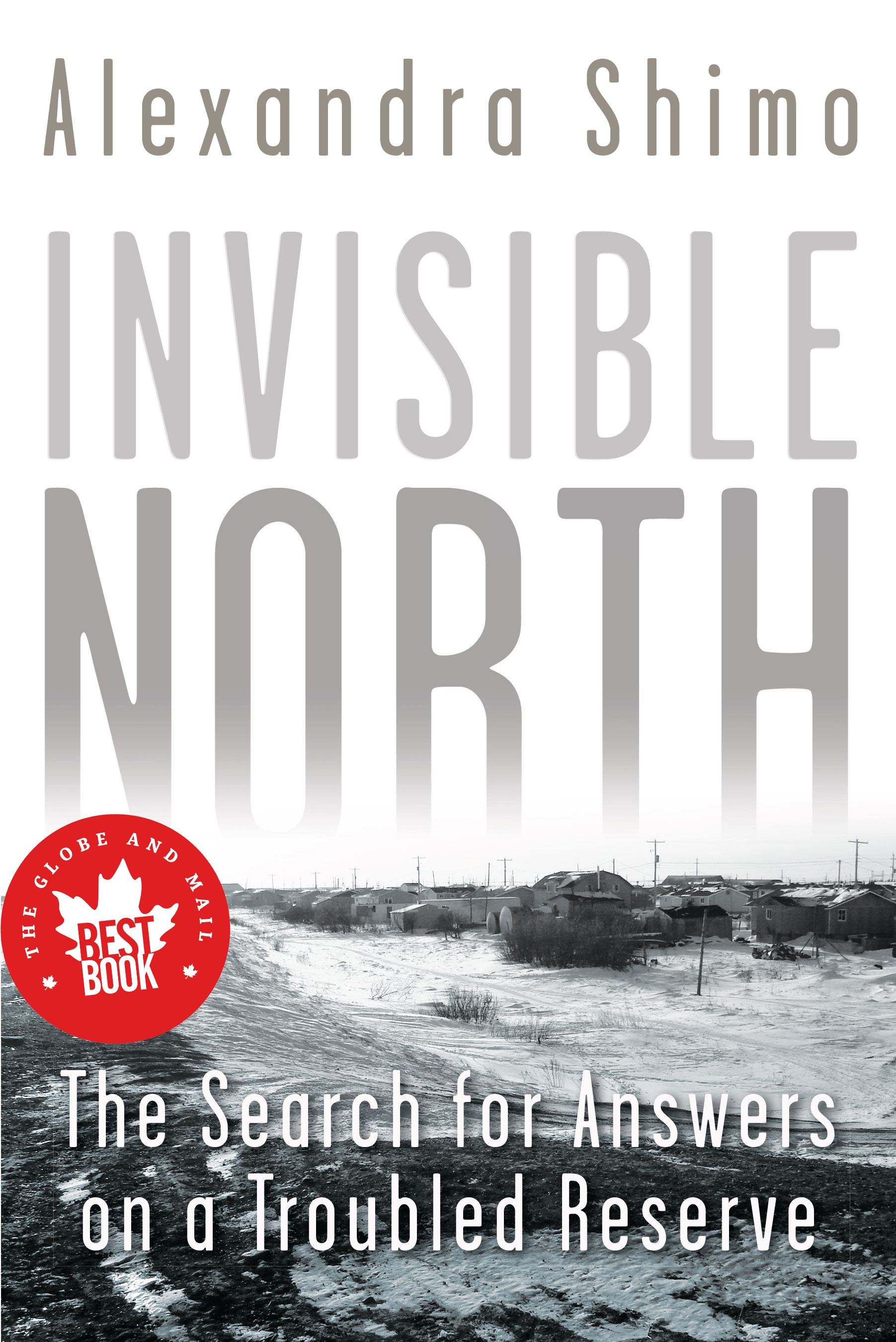 price, he says. It’s a complaint more than 200 years old: as a result of the bans on First Nations trade, they have long had monopoly power, explains Edmund Metatawabin, a Cree author and activist. The furs were underpriced, he says, and most fell into debt.

I walk past $30 frozen pizzas and $15 cartons of eggs. At the fruit and veggie section, a bunch of grapes (79 grams or about 100 grapes) costs $13.42, a bag of apples (three pounds of Golden Delicious) is $15.29, and a single head of red cabbage is $12.89. The prices don’t reflect the quality: the veggies are dry or browning, and some of the meat is past its sell-by date. I choose only the cheapest items: a bunch of green onions on sale for $2.69 and some apples.

Then I walk to the tinned goods section, where a crowd lingers. There’s a special on Klik canned meat: today it’s only $5.99 for the smallest tin.

“Salty,” he replies. We both laugh.

“The prices are crazy here,” I say.

He shrugs: “It’s what we can afford.”

He returns to his shopping cart, which is full of tins.

I walk to the pasta section. Mac and cheese is on sale. It’s only $2.50 per box, a steal, and only a dollar more than down south. I stock up. Next to me a twentysomething woman in a plaid shirt sidles up to me, examining the brands of mac and cheese. Two young kids jockey for position in her cart. 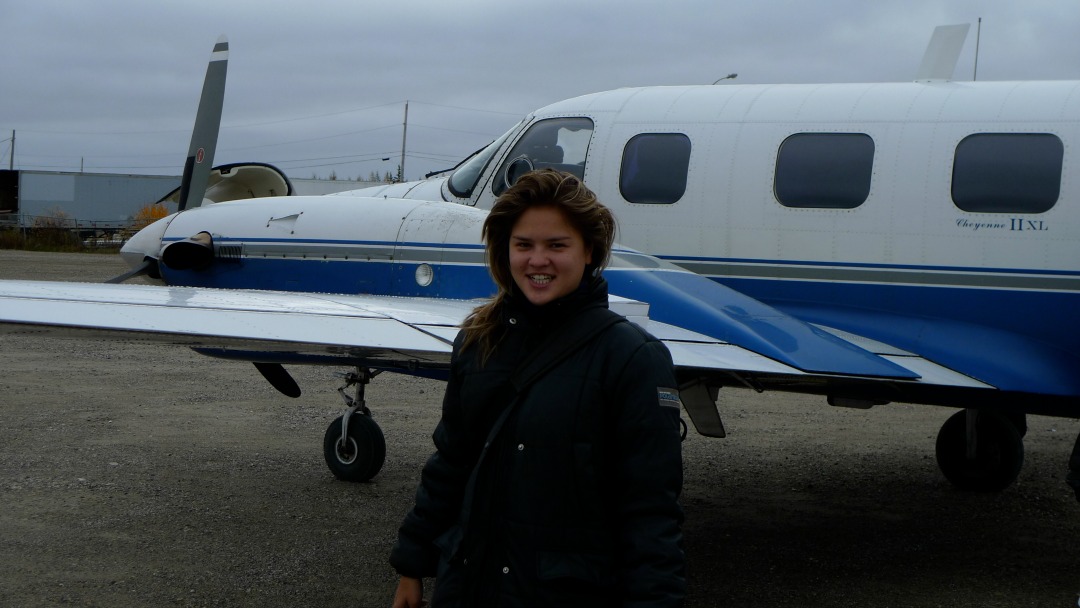 “Settle down,” she whispers. She pauses and scratches her arm. Visible beneath her shift cuff is a rash of raised red circles that look, to my inexperienced eye, like ringworm. I want to ask her about it, but she turns away, covers up.

I finish my shopping and walk to the shopping clerk. I was careful in my selections; I abstained from buying any fresh meat, fish, or fruit. Mostly I’ve bought mac and cheese, pasta, and tuna fish. These were the staples of my childhood, when my mother, recently divorced and a struggling artist, did her best to make the pennies last. My two luxuries were green beans and chili oil.

I stand at the checkout and nervously watch the numbers spiral upwards. My first grocery bill comes to $342.57. I take out a wad of fifties.

Fuck, I think. How do people survive on the $383 monthly welfare? I work full-time and still don’t have the money to live.

I take a taxi home to avoid being chased by the stray dogs. Once home, Emma [Shimo’s host] and I make dinner together and discuss the prices at the Northern store. It’s a big problem, she says. Some of her kids come to school without having had breakfast, or even supper the previous night. She knows when it happens because the kids tune out or misbehave. Sometimes, she says, they eat paper, likely to quell the hunger pangs.

We finish our meal, and then sit down to watch television. There’s a knock at the door. I answer it. A middle-aged woman and her daughter of about six stand on the doorstep. “You like Cree art?” asks the mother.

I nod. The woman opens her plastic sack and holds it up. Birds are stacked on top of each other. I take one out and hold it to the light. Twigs curve at sharp angles, like a delicate exoskeleton. It smells like a spruce forest.

I return to the living room and get my wallet. Returning, I buy two geese.

“Any more?” she asks. She gestures to her daughter. The child picks out a bird and holds it up for me to see. Her wide eyes look like tiny saucers. Her mouth is smudged with something dark, and her hair is matted. She reaches forward, offering it as if it’s a gift.

I know I should keep buying. I can see this family is desperate. Twenty dollars is hardly anything. Just about enough for a bag of oranges at the Northern Store. Not enough for a whole pizza. Certainly not enough for a full meal. That’s what my conscience says. But I suddenly feel panicked. I shut the door.

I have always brought back suitcases of stuff whenever I’ve been in developing nations, such as Cuba or Tanzania. Kash is like those places in some respects, with its shared taxis and people selling homemade goods door to door. But not in terms of cost. Although its population is desperately poor, with 86 per cent surviving on welfare, the prices are some of the highest in the world.

In terms of income, on average, its population earns an estimated $9,741 per person, which includes salaries of those who work, and the 86 per cent of people who survive on welfare alone. This is slightly below Statistics Canada’s on-reserve average of $14,000. If it were a country, Kashechewan’s income would be ranked at 104th in the world, below Iran (70th), Namibia (101st), and Sri Lanka (103rd). But these statistics do not give a true indication of Kashechewan’s poverty. In Iran, Namibia, and Sri Lanka, the salaries are low, but so too are the prices. In Kashechewan, the wages are low, but the costs are four time as high as in the rest of the country.

By including purchasing-power parity, the relative incomes in Kashechewan fall even further. They are more aligned with South Sudan, Haiti, and Afghanistan — all economies that have been ravaged by conflict and war. For this reason, Indigenous communities in Canada and North America are sometimes called the “Fourth World” rather than the Third.

According to a 2014 Council of Canadian Academies study, 90 per cent of the Dene Nation of Northwest Territories said that they or other adults in their household ate less or skipped meals as they couldn’t afford to eat regularly. This is true for other First Nations communities in the north, according to the 2007-08 International Polar Year Health Study, which found that Canada had higher incidences of food insecurity than other developed countries with Indigenous populations, such as United States and Greenland. “The emerging public health crisis in northern Canada represents serious concerns that require immediate attention,” the Canadian Academies study stated. In the short term, it recommended more food banks.

Things are not supposed to be this way, at least not according to our own laws. We signed national legislation and international treaties outlining our commitment to providing adequate food, including the 1948 Universal Declaration of Human Rights; the 1966 International Covenant on Economic, Social, and Cultural Rights; the 1989 Convention of Rights of the Child; and the 1998 Canada’s Action Plan for Food Security. These laws and treaties look at what is required for a person to thrive and function in society. They have argued that safe, nutritious, and sufficient food is part of society’s contract with its citizens. Access to food taps into the very pillars of Canadian society — justice, community, health — and for this reason is as much a social justice concern as a basic human right.

Excerpted from Chapter 2, “The Fourth World,” Invisible North: The Search for Answers on a Troubled Reserve by Alexandra Shimo © 2016, Alexandra Shimo. All rights reserved. Published by Dundurn Press.