The decline and fall of Canada’s first Sears

Before the department-store chain failed everywhere else, it failed in Stratford
By Jamie Bradburn - Published on Nov 29, 2017
Detail from an ad in the Stratford Beacon-Herald announcing the official opening of the country’s first Simpsons-Sears store.

​Nineteen fifty-three was a momentous year for Stratford. On July 13, Alec Guinness took the stage as Richard III during the Stratford Festival’s debut performance. Two months later, on September 17, the ribbon was cut downtown for the first Simpsons-Sears store in Canada. But while the festival continues to flourish, Sears Canada is currently counting down the final days of its winter of discontent.

Following the Second World War, Sears, Roebuck and Company eyed expansion across North America. Although it did see some successes — a department store that opened in Mexico City in February 1947 drew crowds — a catalogue business launched in British Columbia that year failed because of high tariffs. Upper management determined that the best way to break into Canada would be to team up with an established retailer. So in July 1952, a joint venture was announced with the Toronto-based Robert Simpson Company, creating Simpsons-Sears (the name officially became Sears Canada in the 1980s).

The venture would draw on the existing Simpsons catalogue network, and plans were made for four retail-outlet sizes, ranging from full-line “A” department stores to small “D” outlets specializing in appliances, furniture, and mail order. No locations would be placed within 40 kilometres of existing Simpsons department stores — a move that affected London and Toronto until the policy was abandoned during the 1970s.

For its first new store, Simpsons-Sears leased 40-44 Ontario Street in downtown Stratford in May 1953. The space had previously been both a furniture store and a Simpsons mail-order branch (Simpsons had run smaller appliance/catalogue/furniture stores across the country since the early 1930s), so it was ideal for a test of the “D” format. The store would occupy three floors, with auto accessories, hardware, and sporting goods in the basement; appliances, catalogue desk, plumbing and heating, radios, sewing machines, and vacuums at street level; and flooring and furnishings on the top floor.

“The interior of the new store is planned to put as much merchandise as possible before the customer and facilitate the handling of customers during rush hours,” noted the Stratford Beacon-Herald’s store preview. “There is an almost complete absence of counters. Practically all of the merchandise is out in the open where it can be seen and handled. The sales staff work right out of the floor where they can easily demonstrate any of the merchandise.”

The preview suggested that the corporate opening would boast a neighbourly spirit not often associated with similar events today. “On hand to greet customers and friends on opening day will be several well-known Stratford men now on Simpsons-Sears staff,” the paper reported. Men like R.J. “Mike” McClacherty, who ran the plumbing and heating department, and experienced furniture guy W.M. White. Female staff ran the catalogue desk and credit office.

With a cut of the ribbon by Mayor Lawrence Feick, the store officially opened at 9:15 a.m. on September 17. “It is a pleasure to have a store such as this in the city,” he told the crowd. “I’m sure the citizens of the community and district will enjoy its facilities.” The top door prize was a frozen piglet, which went to the customer who came closest to guessing its weight.

The store, though, quickly ran into problems. “It didn’t allow for adequate merchandise displays and the selection of goods was very limited,” observed J.D. Irving, who managed the chain’s “D” stores. “We were not well stocked in any of the lines we sold. It was a sorry start, and it didn’t raise much excitement in Stratford.” And while the first two editions of the Simpsons-Sears catalogue enjoyed strong distribution, implementing Sears’s American policy of adding delivery charges on hard goods and large items alienated Canadian customers used to free delivery — a mistake Eaton’s quickly took advantage of. The extra charges were scrapped within three years. 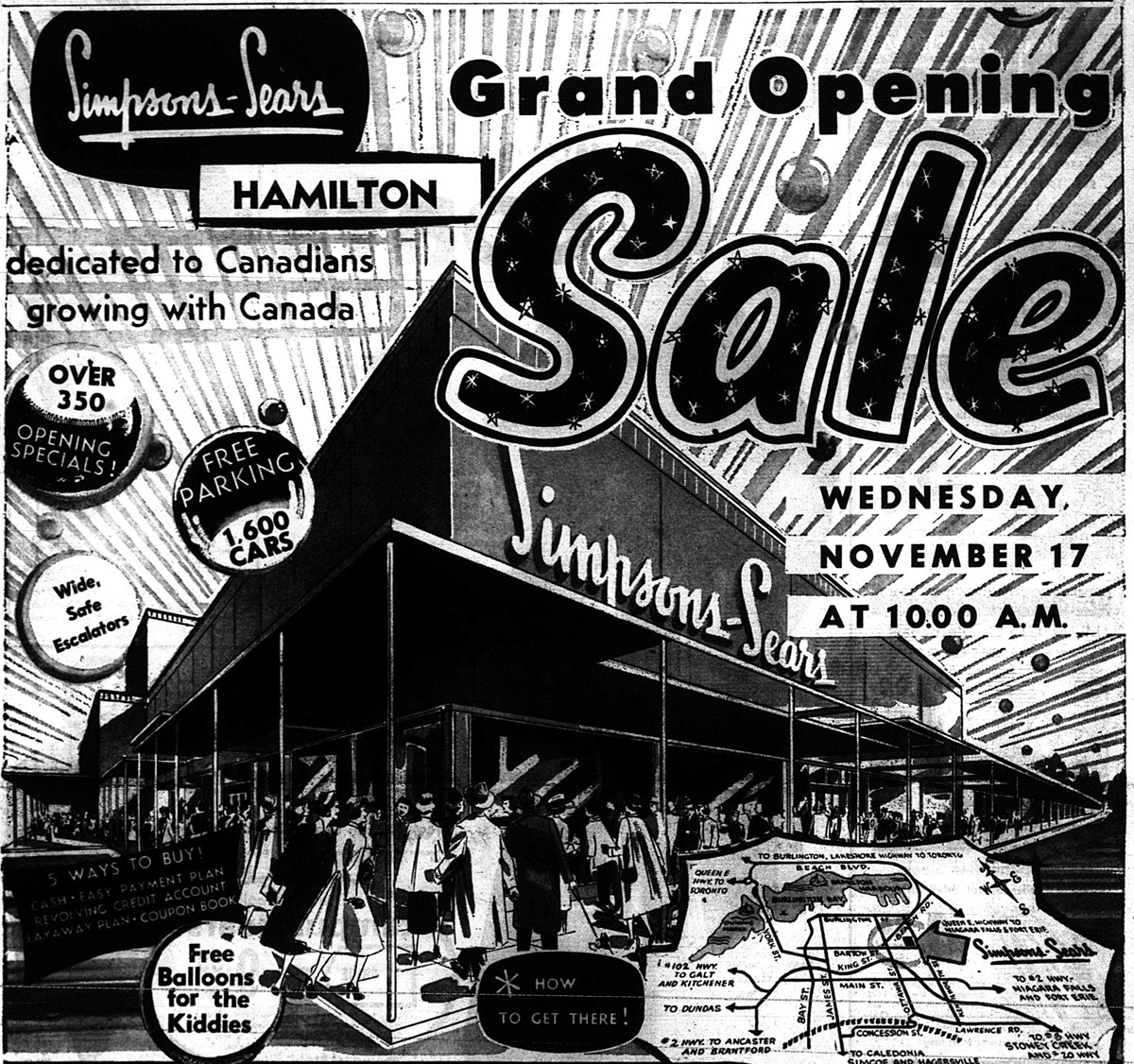 The first “A” store in Ontario to resemble Sears’s future mall locations opened at the Greater Hamilton Shopping Centre (later known as Centre Mall) on November 17, 1954. Nearly 50 police officers directed traffic around the new store, which included 42 departments and 1,500 parking spaces. The store’s staff included highly specialized positions, such as a colour co-ordinator who ensured the right combination of palettes — rust tones for hardware, for example, and a mix of “deep smoke grey, cherry pink and apple marine” for women’s wear.

While other “D” stores were opened across the province in locales from Belleville to Timmins, the format took a back seat to the full-size locations. By the early 1960s, the furniture/appliance combinations were phased out, though specialty Sears stores for those lines would open decades later.

The Stratford location closed within a few years of its opening, but a catalogue office remained. In 1989, a store opened in Festival Marketplace mall. It later moved into a former Zellers elsewhere in the mall, giving Sears the opportunity to test a prototype for one-floor, full-selection department stores in smaller markets. Like the other remaining Sears Canada stores, it is now in liquidation sale mode, ending the chain’s 65-year presence in the city.

Opinion
Systemic racism is at the heart of economic inequality — and of how we get sick and die
OPINION: Our pandemic response has shown how race, class, and gender determine who is most likely to be in the line of fire. We need aggressive reforms to counter systemic racism.
Grace-Edward Galabuzi

Politics
Transit Spending to Save Our Cities?
sfy39587stp16