The case against the case for delaying Toronto’s subway plans

OPINION: The idea that the pandemic should make the province rethink its plan to build more subways in Toronto is flawed. Subways were a good idea before COVID-19 — and they’ll be a good idea after it
By Shoshanna Saxe - Published on Oct 18, 2021
Subway-building requires years of planning and design, followed by roughly a decade of construction. (Daxus/iStock)

It’s been 19 years since Toronto last opened a new subway line. During the interval, the city’s population has increased by about 400,000 people — and it’s expected to increase further. Now is the time to build better transit infrastructure for the future, not to push pause.

But some commentators, including TVO.org’s own John Michael McGrath, take a different view: “Given the profound uncertainty around the long-term state of Toronto’s downtown core,” McGrath writes, “and the enormous costs of getting this kind of decision wrong, the province should at least pause its plans for major subways around the city: the Ontario Line, the Scarborough extension, and the Yonge extension.”

The pro-pause argument boils down to three basic points: One, that during the pandemic, many people bought cars and so will presumably have less use for the TTC. Two, that Toronto’s ever-increasing cost of living will make the city unaffordable to all but the highest earners, who tend to drive. And three, that remote work may render the massive people-moving capacity of subways unnecessary.

All this overlooks what it takes to build a new subway. It overlooks the reasons subways were a good idea before the pandemic and will remain a good idea after it. And it overstates the extent to which the TTC’s ridership today — or even five years from now — should matter to Ontario’s decision-making. As a result, it arrives at faulty conclusions as to what the province should do with its subway plans.

None of the arguments in favour of a pause reckon with the realities of subway-building: it requires years of planning and design, followed by roughly a decade of construction. Early in my career, I worked on the design of the Eglinton Crosstown LRT. That was in 2010. The line is scheduled to open in 2022 — 12 years later. That’s how long it takes to build good-quality, large-scale projects underground. (The province predicts that the Ontario Line, for example, will be completed in 2030.)

Also, there aren’t that many people with the expertise to design and build a subway, and they’re not going to wait around in Toronto if there's no work to do. Projects of this scope take a huge effort to wind down and ramp back up, something that caused big problems between the opening of the Sheppard line in 2002 and the start of construction on the Toronto-York Spadina Subway Extension (a project I also worked on) nearly a decade later, by which time expertise had to be imported — and design timelines extended.

Right now, the province is spending millions of dollars on the planning and design of future subways. The billions of dollars in construction costs will come later. So a one- or two-year pause would result in only short-term savings, an increase in costs when the project is restarted, and further delays to a much-needed subway that Toronto has been talking about, in the case of the Ontario Line,  for nearly 40 years. It would be short-term gain for long-term pain.

While it’s true that new car owners may continue to drive for the next 10 years or so, their pandemic-era vehicles will eventually wear out, and we’ll need new transit infrastructure to discourage the purchase of even more cars in the future — as well as to make transit a more attractive option for potential riders. When talking about a new subway, one that’s not even under construction yet, 10 years is not the relevant timeline. This scale of infrastructure planning challenges us to think 50-plus years ahead.

It also requires us to take a holistic view of transit. As McGrath argues, it’s possible that the job concentration in downtown Toronto may never recover to pre-pandemic levels — but getting people to their jobs is hardly the most important reason to build subways. The fact is, Toronto has a huge infrastructure deficit. Too much housing has been built too far from rapid transit, forcing more and more people to drive. We cannot achieve our goals for equity, prosperity, or environmental sustainability if we continue to rely on the automobile as our primary mode of transportation. We need to attract new transit users and win old ones back — and that means building as much rapid transit as we can, as soon as we can.

But my biggest issue with the pro-pause position is that it reverses the cause and effect of infrastructure. Too often, we think the job of planners is to predict the future and then build the infrastructure that that future needs. But infrastructure is destiny: we get the future we build. And cities that invest in public-transitinfrastructure get cleaner air and lower costs, while their residents get better access to basic needs, jobs, fun, and one another.

The pandemic has undoubtedly changed how we see the future, as well as our confidence in predicting it. Still, there are lots of things we can — and should — do to increase the likelihood of busy and prosperous new subway routes. If demand for workspace in the core plummets, we should retrofit office towers for housing, which Toronto has a dramatically unmet demand for (in the 21st century, no urban district should serve only one purpose anyway). We should build bike lanes and rapid bus lanes now, then coordinate them later to act as feeders for the subways. We should use as many tools as possible to orient land development around subway stations, even if that means altering so-called stable neighbourhoods.

Today’s TTC ridership should not factor into the province’s plans to build more rapid transit in Toronto. Subway systems around the world have survived and thrived after disasters. But they’ve done so only thanks to patience, perseverance, and significant financial investment.

To pause subway development now would be to give in to some of our worst anti-urban instincts. 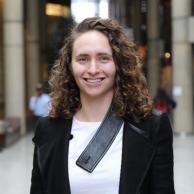 Shoshanna Saxe is an assistant professor in the Department of Civil and Mineral Engineering at the University of Toronto and the Canada Research Chair in sustainable infrastructure.