The Canadian MP who won an election from the frontline

Many of you reading this will have seen our beautiful Centre Block  and Peace Tower on Parliament Hill many times. I have too, but last week, I saw it in a whole new light.

The precinct has added a new light show, which illuminates the buildings at night time in spectacular colour. 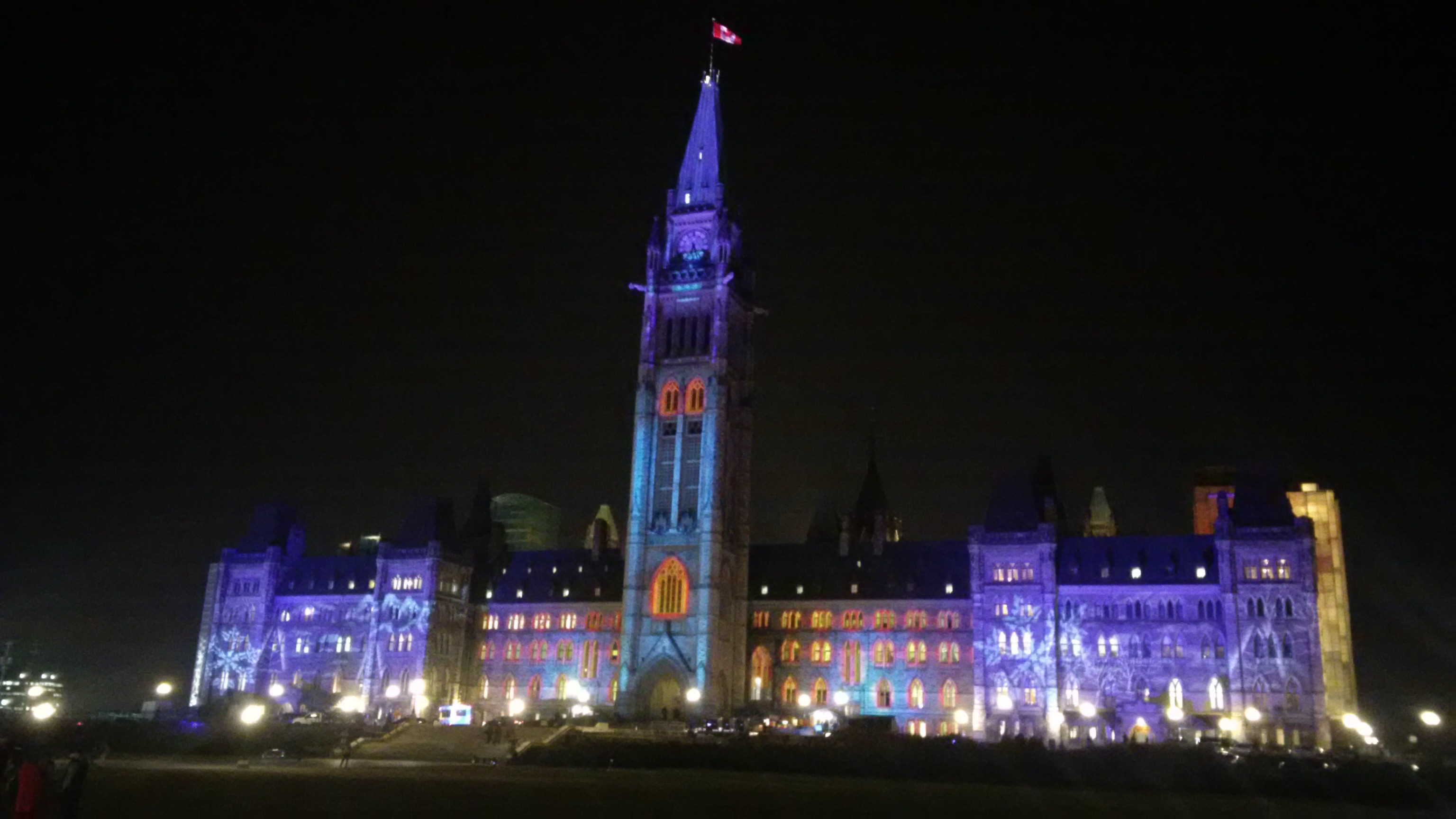 It also reminded me that, from time to time, we’ve actually had members of Parliament inside that building who were as illustrious as the light show outside of it.

Which brings us to the story of Sam Sharpe.

Sharpe was the only sitting MP from the World War I era who was re-elected in the 1917 election while he was a soldier in the Canadian military and fighting on the front lines in France. Nearly 100 years later, it is impossible to imagine a sitting politician raising a battalion and shipping off to war. But Sharpe did it, and not only that, he was awarded the Distinguished Service Order for gallantry under fire.

Sharpe sailed for Europe in July of 1916 and was then deployed to the French front in February 1917. He fought at Vimy Ridge, Avion, Hill Seventy, and Passchendaele.

Sharpe was from Uxbridge and one of his most famous constituents was Lucy Maud Montgomery. She wrote most of her Anne of Green Gables books in Sharpe’s riding and in fact cast her first vote for him, despite being a Liberal from Prince Edward Island Montgomery supported the war and so did Sharpe, a Conservative, and so she supported him. 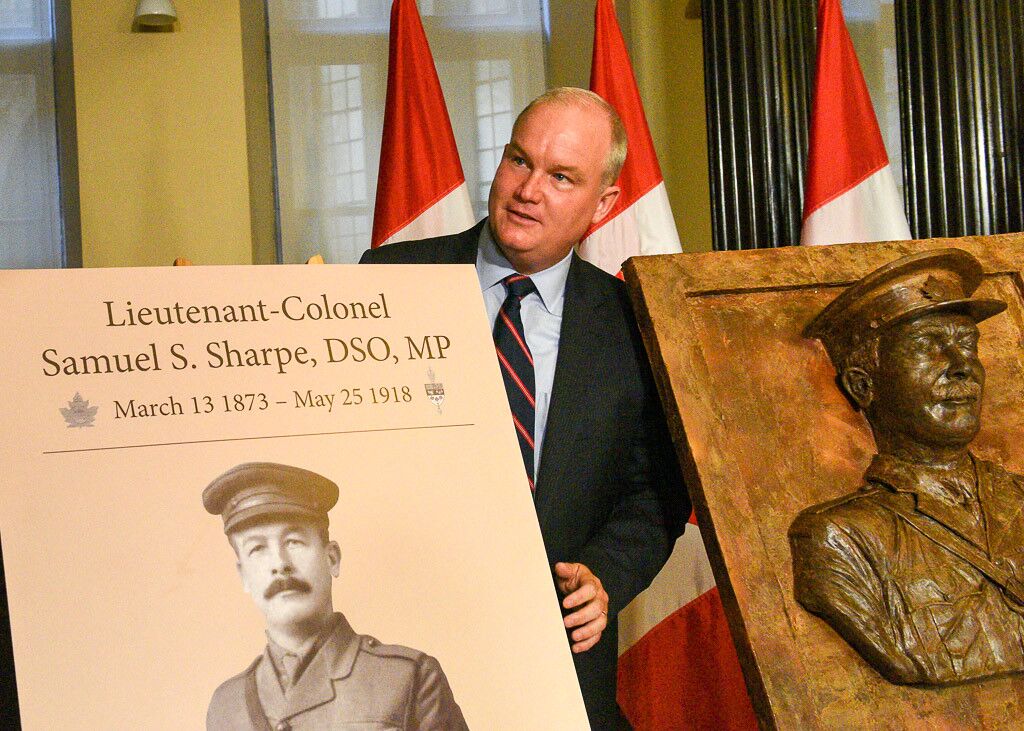 Ironically, while off fighting in Europe, Sharpe ran in the 1917 election on a platform of senate reform. I guess the more things change, the more they stay the same.

You may not have heard of Sam Sharpe, in part, because of how he died. Durham MP Erin O’Toole says: “His memory was essentially erased from history because he was evacuated from the front for ‘nervous shock’ and returned to Canada.”

O’Toole says his return was cast as “battle fatigue, or even worse, cowardice,” when in fact Sharpe was suffering from post-traumatic stress disorder. Sharpe leapt to his death from the window of his hospital room at the Royal Victoria Hospital in Montreal. 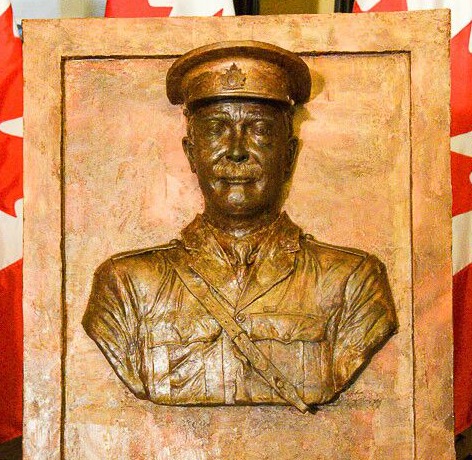 “And I represented his hometown of Zephyr and Uxbridge where he was the town solicitor,” he adds.

Every year, O’Toole co-hosts a Sam Sharpe Mental Health Breakfast during Mental Health Week. And he wants Sharpe’s name resurrected to its rightful place in history. One former MP, George Baker, died at the Battle of Ypres in 1916 and a beautiful statue was erected in the foyer of the House of Commons to commemorate his sacrifice.

“But Sam Sharpe has no recognition in Parliament,” O’Toole says ruefully.

He’d like to change that. O’Toole wants a plaque mounted in the Centre Block on Parliament Hill, right next to Baker’s memorial.

In addition, at the recent gala of the Churchill Society for the Advancement of Parliamentary Democracy, O’Toole used the occasion to lobby Ontario’s attorney-general, in hopes of naming a court house in his riding after Sharpe, given the former MP’s legal background.

“Her reaction was encouraging,” O’Toole said. “Samuel Sharpe’s story stands as a reminder that not all injuries are visible.”

Nearly a century later, maybe it’s time to give Sam Sharpe the dignified place in our history he deserves. Putting up a plaque in Centre Block and naming a court house after him seem a good place to start.

Images of Samuel Sharpe plaque ceremony courtesy of the office of Erin O'Toole.

Northeastern
How northeastern Ontario became a surprise COVID-19 hotspot
Sudbury. Algoma. Timiskaming. Each is facing increased cases — and its own challenges in overcoming them.
Nick Dunne

Coronavirus
COVID-19: What you need to know for December 2
TVO.org staff