The new book 'Diasporic Intimacies' documents how queer Filipino-Canadians helped shape Canada’s LGBTQ movement
By Tairone Bastien - Published on November 17, 2017
Two years ago, members of Babaylan got together to remake one of their old banners. (Courtesy of Lisa Valencia-Svensson)

“This was in the early ’90s when in North America, the conversation around being gay … was just starting to be a public topic of discussion,” says Valencia-Svensson, who’s now in her 40s and is an Emmy-winning documentary filmmaker. (She was a producer for the film Migrant Dreams, which was broadcast on TVO last year.) “Arguably, the fact that Canada is not all white was starting [to be recognized too].” She found that political activism was a natural extension of her desire to live out and proud, not only as a queer woman but also as a Filipina.

Among the group of friends Valencia-Svensson made that summer were a handful of other queer Filipinos living in Toronto. Some of them had been born in Canada; others had moved from the Philippines in their youth. All wanted to be more active on issues affecting both the LGBTQ and Filipino communities in Toronto and the Philippines — especially as there were a growing number of queer Filipinos in the city, many of whom had come to Canada as part of the federal Live-In Caregiver Program and felt isolated at home and in the LGBTQ community.

“I felt like a lot of us were coming out just as much as people of colour,” says Valencia-Svensson, who still lives in Toronto. “Not that it was a secret before, but we were coming out and saying, wait a second, this is an important part of who we are. The LGBT community has to deal 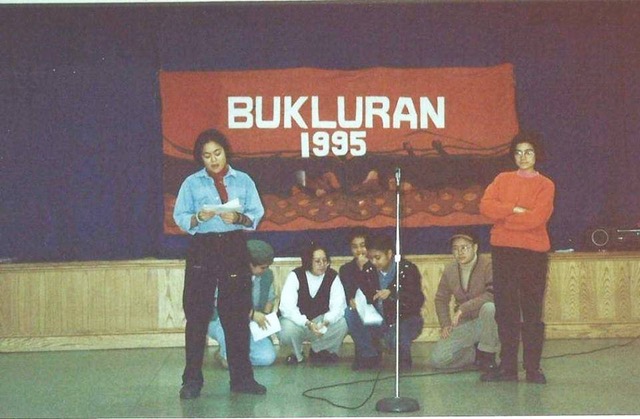 with its racism, and our communities of origin have to deal with … their homophobia.”

Valencia-Svensson and her fellow activists called their group Babaylan, after the pre-colonial Filipino name for a shaman or healer — roles traditionally filled by women or transgender members of Indigenous communities. The group is featured in a new book called Diasporic Intimacies: Queer Filipinos and Canadian Imaginaries, which launches November 17. The book, which includes interviews, memoirs, and scholarly essays, tells Babaylan’s story and highlights the influential but under-recognized contributions other queer Filipino-Canadians have made to Canada’s LGBTQ movement over the past four decades.

Babaylan was most active in the ’90s and early ’00s, organizing events, workshops, and performances to raise awareness of issues important to the LGBTQ and Filipino communities. They no longer act collectively these days, but they remain close friends. Several of them together recounted their most active years with Babaylan in an interview with Diaz for the book.

JB Ramos, a transgender man who today runs a school in Toronto teaching Filipino martial arts, was the youngest members of Babaylan when he joined at 18. He contributes his own chapter to the book, on coming out — first as queer and then as transgender — and on his increasing activism. Born in Canada in the late ’70s, Ramos grew up in Scarborough and attended a Catholic high school, where he refused to wear the school uniform assigned to girls, choosing to wear his older brother’s clothes instead. Ramos came out as queer in high school, but he didn’t feel part of the LGBTQ community until he met a group (unrelated to Babaylan) of queer Filipinas in Scarborough, most of whom were live-in caregivers and newcomers to Canada.

“When immigrants came to Canada, especially from the Philippines, most of their families were still back home,” says Ramos. “So they made their own familial group.”

Ramos remembers his first encounter with Babaylan, in 1994. He attended an event the group had helped organize at a café on Queen Street West, meant to raise awareness of the plight of Flor Contemplacion, a Filipino domestic worker in Singapore who’d been convicted of a double murder in a trial many believed was unfair. Ramos remembers sitting at the back of the room with his friends from Scarborough and being impressed with what he saw: a group of activists engaged with big issues.

Now his story and others like it are part of the big issue Diasporic Intimacies is intended, in part, to address: namely, that although Canada celebrates multiculturalism, the dominant mainstream culture remains white — including in the LGBTQ community. “When we think about queerness in dominant society, we often think of Modern Family, we think of Ellen,” says Largo, one of the editors of the collection. “The type of queerness that is depicted there is very much white, middle-class queerness.”

By telling the story of Babaylan and giving the group its place in the larger narrative of the LGBTQ movement in Canada, Diasporic Intimacies seeks to help change that, to amplify voices that have long been ignored.

Tairone Bastien is a public-art curator and a journalism fellow at the Munk School of Global Affairs.

Tairone Bastien is a public-art curator and a journalism fellow at the Munk School of Global Affairs.

Coronavirus
Liberty vs. Security in a Pandemic
Are Canadians being asked to behave too far against their civil liberties during the COVID-19 outbreak?
Coronavirus
Dealing with COVID-19 Skeptics