Students should not have to educate educators about racism

OPINION: Universities and colleges must take a hard and unflinching look at the ways their policies, practices, and attitudes perpetuate discrimination
By Ena Chadha - Published on Mar 22, 2021
"Students experience overt and systemic racism in their curriculum, lectures, evaluations, residences, and campus life," writes Ena Chadha. (iStock/Drazen Zigic)

On Sunday, the United Nations commemorated International Day for the Elimination of Racial Discrimination with the theme of "youth standing up against racism." It’s a theme that resonates here in Ontario, as diverse groups of students repeatedly denounce racism and inequities in their universities and colleges.

Last year, students across the province created various university- and college-specific Instagram accounts to anonymously share their experiences of racism, leading to hundreds of testimonials and thousands of followers. In the fall, Ottawa students organized a five-day sit-in protesting anti-Black racism, including faculty’s use of a racial epithet. Around the same time, under the banner of ExposeUWindsor on Twitter, students revealed ugly scenes of racism. Just last week, students rallied on social media to decry a York University professor’s callous comments about a student’s need for accommodation because of civil violence in Myanmar. Whatever the institution or encounter, a common narrative is students demanding tangible action to end anti-Black, anti-Indigenous, and anti-Muslim racism.

When the Ontario Human Rights Commission learned about discrimination that students had said they’d been subjected to by their peers, professors, and administration, including disturbing behaviours like microaggressions, surveillance, racial slurs, and violence, it issued an open letter to all public colleges and universities in Ontario. The OHRC's December 18 letter emphasized that academic institutions have a duty to proactively investigate systemic discrimination and that students should not be left to bear the burden of calling on academic institutions to combat racism.

It is highly problematic that students, some recently out of high school, felt they had to solicit OHRC support to secure respectful learning environments because their human-rights concerns had gone either ignored or unresolved. By coming forward, students expressed risks to their mental health and fears of harm to their reputations and career prospects. When students experience discrimination in their education, this diminishes their self-esteem, sense of safety, academic performance, and social integration. Given that pursuing such concerns can be draining and discouraging, it is likely that we may, in fact, be hearing from only a fraction of affected students.

Academic institutions must promote a culture of equity and inclusion by embedding comprehensive and effective anti-racism and anti-colonial initiatives in all areas and at all levels of their institutions. Students experience overt and systemic racism in their curriculum, lectures, evaluations, residences, and campus life, as well as through financial barriers. Institutional racism undermines hiring, promotion, and tenure procedures and permeates administrative and governance policies. Instead of making performative gestures to honour an international day against racism, universities and colleges must commit to taking a hard and unflinching look at the myriad ways their policies, practices, and attitudes perpetuate discrimination.

One serious omission contributing to the problem is the absence of data documenting the racial diversity of students in post-secondary education. Unlike the United States, which has a longstanding practice of tracking patterns and causes of academic disparities by race, we have no systematic framework for collecting race-based data. A 2016 Statistics Canada survey reported that only 20.9 per cent of Canada’s full-time faculty identified as racialized; however, no reliable student census exists. While some academic institutions have made commitments to collect this data, there are no formal mandates requiring such efforts.

Domestic and international students in diverse fields of study desperately want to learn about the impact of race in today's society, how to create equitable communities, and how to dismantle structures that reinforce racism. Students identify the dearth of curricula about Canada's history of colonialism in their lack of understanding of systemic discrimination and in their search for the meaning of truth and reconciliation. Students report that racial and colonial oppression should be compulsory learning for all post-secondary students in Canada, not just those pursuing an education in social studies.

Students have mobilized to create change, and their insights are essential to transform attitudes, values, and systems. But, ultimately, post-secondary institutions must be accountable for educating their students about equity. Students must be provided with meaningful opportunities to learn about anti-racism, decolonization, intersectionality, privilege, and oppression in such fields as science, business, mathematics, arts, athletics, theatre, engineering, and health care. Critical pedagogy is fundamental to decolonization and liberation. Unless we teach human rights to students in all programs of study, we will fail to launch the next generation of leaders necessary to create an equitable society.

Systemic racism exists in all social arenas, and academic institutions are not exempt. Post-secondary institutions are a microcosm of society and replicate the human-rights disadvantages and dynamics we see and experience around us. It is devastating to hear about students’ experiences of discrimination, especially at the hands of faculty. We must pay heed to and support students' calls for anti-racism curricula, fair systems, diverse representation, and accountable structures. Students championing equity should not be left to educate the educators. 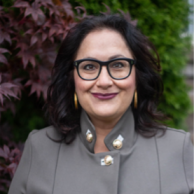 Ena Chadha is a human-rights lawyer who previously served as the interim chief commissioner of the Ontario Human Rights Commission.