Since ice roads won't stay frozen, we need to get serious about building permanent roads in the far north

OPINION: More than 30 Ontario First Nations communities rely on winter ice roads to truck in everything from fuel to building supplies. Warm winters are jeopardizing that lifeline, and we need an alternative
By John Michael McGrath - Published on Jan 24, 2017
Climate change is hitting the north hard, and that means Ontario will have to decide whether the ice road network will be able to sustain the region in the 21st century. (John Michael McGrath/TVO)

The one thing that’s supposed to be reliable about Ontario’s far north is cold winters. But increasingly, warm spells in winter have delayed the opening of the ice roads that connect 31 remote First Nations communities spread across the bulk of the province’s north, from the shore of James Bay to the far northwest. This year, while grading and packing of snow and ice clearing has started in some locations, not a single one of the province's ice roads has opened to commercial traffic, and only half a dozen have opened for personal vehicle use. In the province’s northeast, the Wetum Road connecting the Moose Cree First Nation and other communities farther north to the provincial highway system won't open until next Monday at the earliest.

The ice roads are a crucial lifeline to communities physically cut off from the rest of the province most of the year. Climate change is coming for all of us, but in Canada it's hitting the north hardest, and that means Ontario is going to have to decide sometime in the near future whether the ice road network will be able to sustain the region in the 21st century.

It almost certainly won’t, and the province should start talking about what will replace it, and what that will cost.

“The weather reports today say it could be too warm for another week or so … The communities that still rely on diesel plan their fuel hauls for late January, but now that’s not happening,” Fiddler told TVO.org on Monday. “My own community of Muskrat Dam only has seven to eight days of fuel left, and I imagine that’s going to be the case for other communities.”

When diesel reserves run dry one of two things happens: either the power runs out, or the government starts sending diesel by plane – something that’s enormously expensive, and even more contingent on weather conditions.

Not everything can be flown up, however. Building supplies can only be moved by truck, and until the ice roads open to commercial traffic, projects across the north are on hold. “In Sandy Lake, they were planning to construct a new nursing station this year,” Fiddler says. “They need to move all of the materials up on the ice roads, so there’s a lot at stake here.”

Last year’s season on the Wetum Road lasted only 63 days — something remote First Nations expect to be a new permanent feature of life in the north. Winter roads are the only kind of surface route these communities have, and even in a good year they’re only open for a few months. Thanks to climate change, the good years are less and less frequent. Their access to the rest of the provincial economy, already tenuous, is becoming increasingly precarious along with the roads, making any kind of community planning more difficult.

The problem of the far north is a tough one for any government: 24,000 people, about 90 per cent of them Indigenous, are scattered across 45 million hectares, or 40 per cent of the province’s land area. Building infrastructure across such a large area, to serve a relatively small number of people, is something governments have historically balked at except when potential resource riches are involved.

But nobody is calling for a six-lane freeway to the shores of Hudson Bay, either. All-weather roads don’t even need asphalt, given the small traffic volumes: proposals to build a road up to James Bay rely on good old-fashioned gravel.

Fiddler has called for a summit on northern infrastructure — not just roads but energy, telecommunications, and other essential infrastructure networks.

There are a few signs of progress. The provincial and federal governments are collaborating with the Windigo Tribal Council to extend the Northern Ontario Resource Trail 42 kilometres north, to Weagamow First Nation. This will create a permanent, year-round connection to Pickle Lake, where the provincial highway network ends (or begins, depending on your perspective). The Ministry of Northern Development and Mines told TVO.org in an emailed statement that “work is well underway” on planning and designing the extension, but it could not provide a cost estimate.

It’s undeniably good news for the Weagamow First Nation and is worth applauding. But it’s also dispiriting how small a measure of progress it is: the province funds 3,160 kilometres of ice roads annually, so this newest connection amounts to just over 1 per cent of the total distance usually covered. The costs of converting even a substantial fraction of the ice road network into something more permanent could easily run into the billions of dollars.

But Ontario is a wealthy province, one prosperous enough to make decisions that don’t, strictly speaking, meet an accountant’s cost-benefit analysis. It’s possible to do the right thing simply because it would massively improve people’s lives, and improve their communities' ability to plan for the future.

It’s not that simple, of course: even in cases where the government has committed money, the politics of road-building are potentially fraught. In the northwest, a proposed 280-kilometre all-weather road that would connect four communities around the Ring of Fire mineral deposit has been waiting in part for a decision on whether the road is intended to serve the mine or the communities around the mine. The Ontario government has pledged $1 billion in infrastructure funding for the Ring of Fire, but so far there’s no detailed agreement between governments, First Nations, and Noront, the primary mining company involved.

Indigenous people have more than earned their caution about further exploitation of their traditional lands. And it’s a problem that accompanies any plan to increase the connections between the far north and the rest of Ontario: roads don’t go only one way or for one purpose. Giving remote communities better access to the economy will, by definition, mean giving the economy better access to them. It’s not just about resource extraction, either. Some elders worry about the potential for more crime and drug use in communities suddenly given permanent connections to the south. But the ice road seasons keep getting shorter and shorter, and the status quo is literally melting beneath their feet. 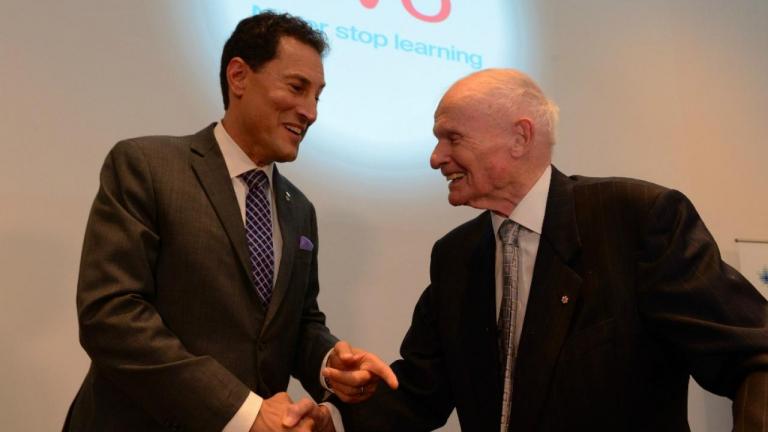