The province ended its vaccine prioritization for hard-hit postal codes on Monday. The Timmins mayor wants it to change course
By Nick Dunne - Published on May 20, 2021
As of May 20, there are 225 active cases in the Porcupine Health Unit’s catchment area. (Nick Dunne)

When a COVID-19 variant of concern was reported in Timmins last month, Mayor George Pirie was worried. “We knew with this variant that the viral load is much higher, and we knew that it was going to end up with a younger population getting sick,” he says. At the time, he had a simple message for residents of the northeastern Ontario city of about 41,000: “This is serious — please take this seriously.”

However, on May 13, the rate of COVID-19 infections per 100,000 in the Timmins region surpassed the seven-day rolling average for the province, according to the Porcupine Health Unit, which serves the city and surrounding area. Two days later, the weekly case rate surpassed Toronto’s, and the PHU’s single-day case rate exceeded Peel Region’s — both among the province’s hardest-hit pandemic hot spots.

This past weekend, Timmins and District Hospital, which can accommodate nine ICU beds during surge capacity, had to transfer patients after hospitalizations doubled. “I was just devastated to see that the numbers kept going and going and going,” says Pirie. “I thought, My, this is going to be a disaster; we've got young kids in hospitals.” On Monday, Pirie declared a state of emergency and asked the province to designate the city a hot spot.

What’s driving cases up in Timmins?

Lianne Catton, medical officer of health for the PHU, attributes the surge in the Timmins region to the highly contagious variant first identified in the United Kingdom — it has accounted for 364, or 67 per cent, of local cases in the third wave.

“We are seeing exposures pretty much everywhere,” Catton said at a press conference on Tuesday. The health unit has not been able to pinpoint any specific outbreak or spreading event that has led to the sharp increase in cases, she explained, noting that the virus has mainly transmitted through community spread: “We've had schools impacted when they were open. We've had daycares and various workplaces — we definitely see it in households and any other potential shared spaces as well.” 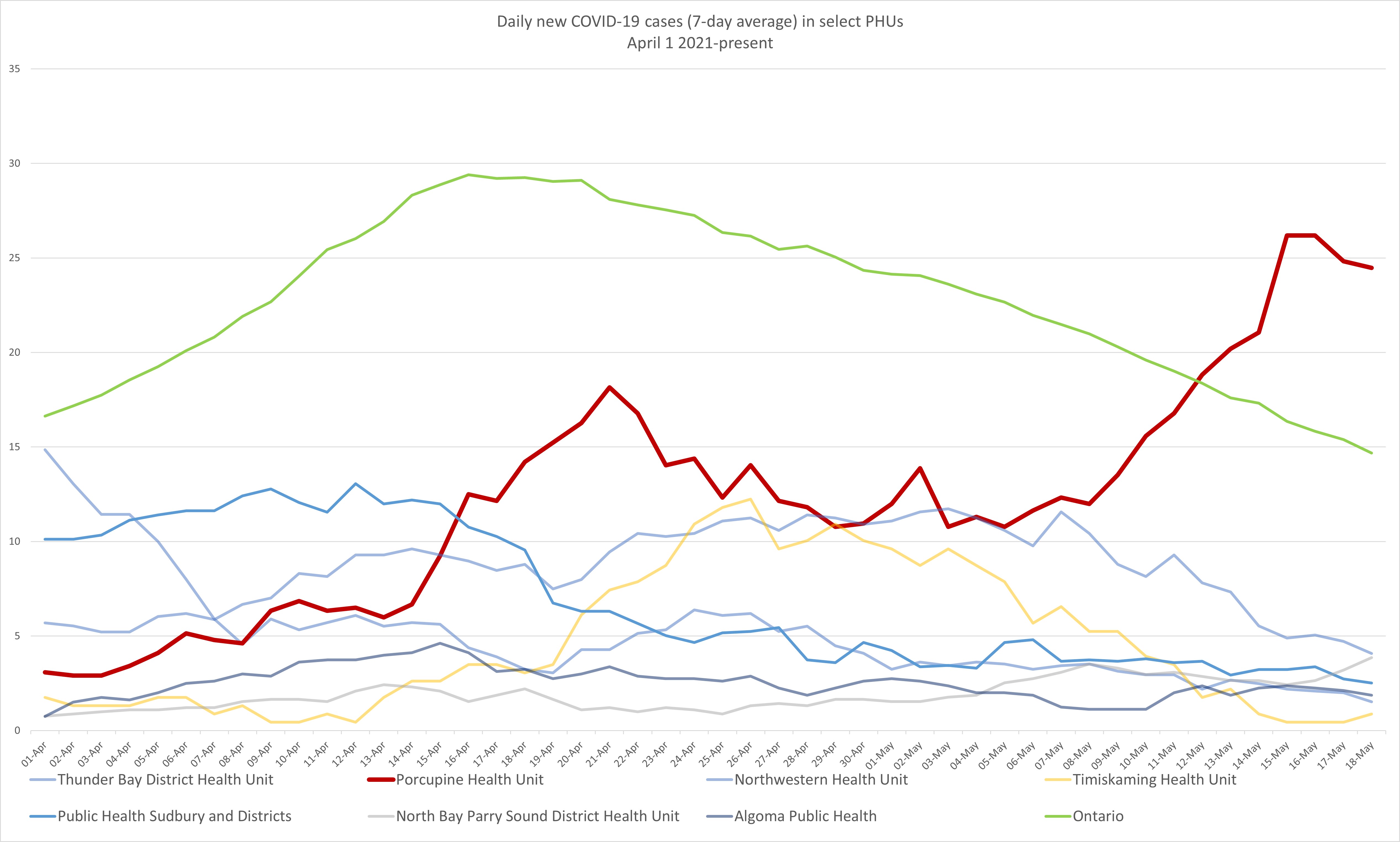 According to data from Public Health Ontario, 276 cases in the Timmins region since April 1 came from close contacts, while 97 cases stemmed from outbreaks. Another 89 had no known epidemiological link, and 55 had no information. Cases have also skewed younger. From May 4 to 18, nearly 54 per cent of cases involved people under the age of 30. “In our third wave alone, we are looking at an average age between about 30 and 35 years of age,” Catton said.

How have hospitals been affected?

The cases have hit the Timmins and District Hospital hard, according to a joint statement from the local health unit and hospital. “In under 24 hours, COVID-19 admissions at TADH doubled from five to 10 patients, with the average age of admission being 42,” says Kate Fyfe, the hospital’s president and CEO, in the statement, referring to developments over the past weekend. “Simply put, we are seeing younger patients — who are sicker than the previous two waves — needing medical attention in hospital.” A spokesperson for the hospital says that although patients have been transferred, ICU capacity is stable.

The escalating cases haven’t affected only the Timmins hospital. Elaine Innes, chief of staff for the Weeneebayko Area Health Authority, which oversees the Weeneebayko General Hospital in Moose Factory and provides health care to the James Bay and Hudson Bay area, says non-urgent medical trips have been postponed for several weeks due to the heightened presence of the virus.

“We're always watching what's happening in the south,” Innes says. Though the authority is located some 300 kilometres north of Timmins, the city acts as a regional hub for health care and other services. “We certainly don't have the infrastructure or capacity to be able to handle very sick patients here at our hospitals,” she adds. As of Thursday, there are 17 cases in WAHA’s area.

How is the city responding?

Pirie says there would be tangible benefits if the province were to designate Timmins as a hot spot: “You get more vaccines, you get more PPE, and you get more resources applied.” The province ended its vaccine prioritization in hot spots on Monday. (TVO.org reached out to the Ontario Ministry of Health but did not receive comment by publication time.)

Catton says that the health unit has received enough vaccines to run multiple walk-in clinics this upcoming weekendand to open vaccine eligibility to anyone aged 12 and older. “The pop-up clinics and walk-ins are really important opportunities to try and ensure that there are no barriers to individuals accessing clinics,” she said Tuesday. While more than 55 per cent of adults in the area have received a vaccine dose, there have been open slots in recent clinics, Catton said: “Whether there's a provincial designation or not, we've been acting as though we're a hot spot here at the Porcupine Health Unit.”

Coronavirus
COVID-19: What you need to know for January 21
TVO.org staff

Coronavirus
COVID-19: What you need to know for January 20
TVO.org staff