Shear waste: Why Ontario throws out so much wool

It’s renewable and biodegradable, but farmers often have to discard it. Can the province change the product’s profile — and make the world flock after its wool?
By Marina Eckersley - Published on Dec 15, 2020
Some experts say that the rise of synthetic materials has contributed to the decline in Ontario’s wool industry. (iStock/D-Huss)

Romy Schill, her husband, and a flock of 900 sheep live in Elmira, where together they operate Circle R Lamb and Revolution Wool Company. Through those companies, the couple sells wool products such as pillows, blankets, and lamb skins. They also sell meat and offer breeding stock, if you’re in the market for Dorset rams, Australian rams, or ewe lambs.

“For the Canadian industry, I don't ever see it possible to raise a flock of sheep solely for wool production,” Schill says. “Not only would that never make financial sense — at some point, you have to get rid of your excess animals.”

Wool is a renewable and biodegradable fibre that can be used for clothing, bedding, insulation, packaging, and fertilizer. But Ontario’s 3,000 sheep farmers, whose animals are largely used for meat, often don’t earn enough from the sale of wool to cover the cost of shearing.

Of course, sheep across the province continue to grow wool, regardless of the cost of upkeep. In 2019, the Canadian Co-Operative Wool Growers Limited, a producer-owned co-operative, collected 800,000 pounds of wool from Ontario farms for market. Eric Bjergso, the general manager, says “upwards of 90 per cent” of that wool is exported.

That doesn’t account for all wool produced in Ontario — some is inevitably stockpiled on farms, composted, or sold. While there is no data available for Ontario, research from Dalhousie University published in 2017 included a survey that found that an estimated 50 per cent of wool in Atlantic Canada goes unused.

According to the co-operative’s annual update, the last two years were unkind to the wool trade. Approximately 30 per cent of the wool collected by CCWG went unsold in 2019 thanks to the trade dispute between the United States and China — and the ongoing pandemic has made things worse. “Prior to the last two years, it was never difficult to sell the entire wool production every year to our international and Canadian customers,” said Bjergso via email.

But the challenges facing the industry are longstanding. In the 1800s, there was small-scale infrastructure for wool processing in almost every Ontario hamlet, according to Helen Knibb, an Ontario wool producer and doctoral candidate at Trent University whose research focuses on the new wool economy. “There were these  … sort of hyper-localized connections … between the producer and the processor, which helped to facilitate the production of homespun cloth for domestic use,” she says. “It was farmhouse scale, but it was essential and necessary.” Once strong mill infrastructure has largely been lost, Knibb says — some mills have burned down or been demolished, while others have been repurposed.

In 1920, according to Statistics Canada, there were more than 1 million sheep and lamb on Ontario farms; today, there are just 325,000. Some experts say that the rise of synthetic materials contributed to the decline in Ontario’s wool industry. But environmentalists have criticized synthetics materials, as washing synthetic clothing contributes to microplastic pollution. While wool carries its own environmental impact, its proponents say it is biodegradable, renewable, and can be washed less frequently.

“There is no one solution and there is no perfect 100 per cent sustainable material that is impact free,” said Anika Kozlowski, an assistant professor of fashion design, ethics, and sustainability at Ryerson University, via email. “So you have to decide where you are OK with having positive and negative impacts — and which kind.”

Processing wool in Ontario is labour intensive and expensive: sheep are sheared for animal welfare, but before someone can use the wool for weaving or knitting, it must be skirted, washed, cleaned, carded, spun, and, sometimes, dyed.

For farmers, that can distract from their existing business. “It's a different set of business attributes versus just farming — I see the value of using wool, and I see the market for it. But that means I'm now having to take time away from the actual farm operation,” Schill says. “If you're busy on the farm, it would be great if you could just sell off your wool, and something gets done with it. Most, I think, would just appreciate at least getting paid for the shearing.”

Much of the province’s wool processing is on a smaller, artisanal scale. “Textiles are inherently expensive because every part of the process requires time,” says Deborah Livingston-Lowe, a weaver and historian in Toronto. “The mills that I work with, they can hardly keep up with what I need, because I’m not their only client. It’s the capacity of the spinning mills that I think is a real bottleneck for us.”

Ontario’s wool is also not necessarily the high-grade variety that’s sought after for sweaters. Wool that is not suitable for clothing, Knibb points out, can be used for such things as packaging and insulation. “It's everything from … using waste wool and wool that is contaminated with fecal matter to create garden fertilizer,” Knibb says. “It’s acknowledging that every wool has a purpose — and finding that purpose.”

“There's an easy conclusion to jump to that you need Merino or a wool-specific breed. We have a rustic wool,” says Schill. “It has its own unique qualities. It repels water better; it keeps its shape better. So there's an education side of it, too, to educate consumers why Ontario or Canadian wool is good.”

Matthew J. Rowe, the CEO of the Campaign for Wool in Canada, says that Canadians need to understand the value of the product. “It’s a classic Canadian story: we supply a commodity, we sell it abroad, and then they add the value, and then they sell it back to us as finished goods,” he says. “We’re not going to build a sustainable economy that way.”

The organization hopes to convince Canadians of wool’s sustainability benefits. “That’s what we're trying to do with the campaign, is to work with the existing parts and kind of push everyone involved — challenge them to create something new or better, more exciting, and ultimately higher value,” Rowe says, adding that insulation, packaging for shipping meat and pharmaceuticals, and masks, are all possible avenues.

In the United Kingdom, Thermafleece has been in the business of wool insulation since 2000, using only British wool. And the results of a study in Nova Scotia suggest “some potential for adding value to wool” in areas where smaller farmers discard it because of its low price.

Knibb says that, while Ontario has lost wool culture and awareness over the decades, she’s started to see change. So-called fibre festivals, for example, are bringing producers and fibre artists together under the same roof: The second annual Muskoka Fibre Fest, which was moved online due to the pandemic, had 46 confirmed vendors listed on its website. The Woodstock Fleece Festival, which was cancelled due to the pandemic, was set to hold its 12th annual festival last month and had over 50 vendors listed.

More generally, Livingston-Lowe says, we need to reconsider textiles, which were once precious enough to be passed down through generations: “People devalue textiles so much. They think that they should be the cheapest thing. And, you know, we want to spend lots of money on technology, devices, but we don't necessarily want to invest in a piece of cloth that is beneficial to so many people on the supply chain — right down to the farmer, who keeps the land in a state that's good for the environment.” 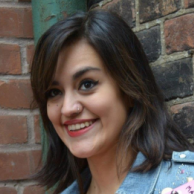 Environment
Shark Kill Zone
They may be the ocean's top predators but sharks still face great challenges in grabbing a meal.
Politics
Does Ottawa's Climate Plan Add Up?
Environment
The Greenbelt Controversy