By Tyler Hamilton - Published on Sep 07, 2016
New federal grants include funding for research into growing food in a changing climate. (jxfzsy/iStock)

Tuesday was a big day for climate and energy science.

The federal government announced that 13 research projects from across Canada are to get $900 million in funding through the Canada First Research Excellence Fund. It’s a massive sum, and five of those projects will in some way examine the effects of climate change or reducing GHG emissions.

The University of Guelph is getting $76.6 million to study and develop systems that are “capable of meeting the rising human demand for food while being resilient to climate change.” Out west, the University of Alberta and University of Calgary will receive $75 million each to look at ways of reducing the carbon footprint of unconventional energy sources and exploring low-carbon alternatives.

The University of Saskatchewan — in partnership with Wilfred Laurier University, the University of Waterloo and McMaster University in Ontario — is getting $78 million to develop new ways of forecasting and reducing the risk of water-related threats, such as droughts, floods and pollution. John Pomeroy, associate director of the new program, says the big Calgary flood of 2013 led to the project proposal. “We’re doing it because climate warming and associated severe weather have coupled with unprecedented growth in population and industry across Canada.”

Finally, Dalhousie University is leading a network of institutions from Atlantic Canada to create the Halifax-based Ocean Frontier Institute. Ottawa is contributing $93.7 million toward the new research effort, which will study aspects of ocean and ecosystem change (much of it climate-driven) and develop “safe and sustainable” approaches to ocean development, all with a focus on the northwest Atlantic and Canadian Arctic gateway — both climate hotspots.

It was U.S. President Barack Obama’s last visit to China before his time in the White House comes to an end, and he made his final trip count. On Saturday, in advance of the G20 Summit in Hangzhou, Obama stood with Chinese President Xi Jinping and announced that their respective countries had formally ratified the Paris climate agreement.

On the sidelines of the summit, mayors from 30 of the world’s largest cities — including Toronto Mayor John Tory and Vancouver Mayor Gregor Robertson — sent an open letter to G20 leaders urging them to work more closely with cities and regional governments to meet the emissions-reduction objectives of the Paris agreement. 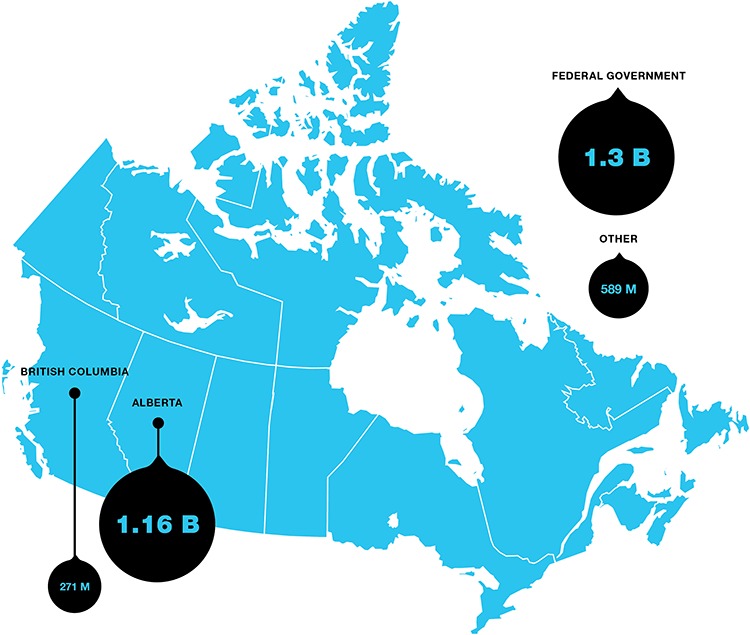 View the text alternative for the fossil fuels subsidy infographic

It’s not unusual, of course, for organizations to use the occasion of a G20 meeting to make a point. The Winnipeg-based International Institute for Sustainable Development (IISD), for example, highlighted the fact that Canada’s federal and provincial governments continue to provide $3.3 billion in subsidies (funding and tax breaks) each year to the hard-hit but still highly profitable oil and gas sectors. The Liberals campaigned on a promise to fulfill Canada’s G20 commitment to eliminate fossil-fuel subsidies, with savings “redirected to investments in new and clean technologies,” according to the party platform. The pressure is on for Canada and other G20 nations to take action by 2020, but the Trudeau government has yet to release a plan.

The Big Picture: Keeping an eye on the Atlantic’s “conveyor belt”

Remember the 2004 movie The Day After Tomorrow? In a nutshell, it’s a highly exaggerated depiction of the extreme weather that could follow globally if the North Atlantic current was disrupted, say, from the melting of polar ice and Greenland glaciers. It was inaccurate in many ways — as big budget Hollywood disaster films tend to be — but the basic premise still holds: real scientists remained concerned about what could happen if the “ocean conveyor belt” begins to significantly slow.

Yale’s Environment360 has an in-depth feature on the issue. Since they started monitoring Atlantic currents back in 2004, they have found that it wobbles and weakens, at times by as much as 30 per cent. When this happens, it turns down the dial on a massive heat pump that carries warmth toward northern Europe. “Turn that dial down too much,” researchers have found, “and Europe will go into a deep chill.”

Generally, when the Atlantic currents slow there are global effects. “The entire Northern Hemisphere cools, Indian and Asian monsoon areas dry up, North Atlantic storms get amplified, and less ocean-mixing results in less plankton and other life in the sea,” the feature explains. Scientists are still trying to figure out whether their observations are part of a natural cycle or part of a climate change-driven phenomenon. We may need at least another 10 years of observation to understand it better, and even then, nothing is for certain with such complex systems.

One talking point often used by skeptics is that climate change can’t be all that bad because, you know, carbon dioxide is fertilizer for plants. The more we spew into the atmosphere, this argument goes, the greener the planet will become. This is true to a certain extent: we pump carbon dioxide into greenhouses to help tomatoes grow, for example.

Andrew Leaker, a researcher at the University of Illinois, decided to put this theory to the test, using soybeans as his guinea pig — a tremendously important crop,  the fourth largest in Canada by acreage and worth $2.4 billion to the country annually. Led by Leaker, researchers grew soybeans outdoors for eight years in a carbon-rich atmosphere like that we may experience in 2050.

They observed that higher carbon dioxide levels do indeed boost plant growth under both wet and normal conditions, but when drought-like conditions associated with climate change are introduced the plants don’t conserve water as previous thought: they actually require more water than usual. They also observed that, under these stressed conditions, photosynthesis declines and plants have a harder time taking in nitrogen through their roots. Leakey says previous models assumed that by 2050 elevated carbon dioxide levels would lead to a 15 per cent boost in crop yield. “What we’re seeing is that as it gets hotter and drier that number diminishes to zero. No gain.”

It’s a noteworthy finding, particularly for Ontario soy farmers, who account for 58 per cent of Canada’s total production, according to Soy Canada.

Results of the Leakey-led research were published this week in the journal Nature Plants. A 17-year study in California, which focused instead on flowers and grasslands, recently came to a similar conclusion.