TVO.org speaks with Megan Fowler of Journalists for Human Rights about what institutions can do to create environments where Indigenous journalists can thrive
By Shelby Lisk - Published on Sep 03, 2020
Two children using media equipment from the Indigenous Reporters Program in Nibinamik First Nation. (Adrianna Oskineegish)

Launched in 2014, Journalists for Human Rights’ Indigenous Reporters Program seeks to increase the quality and quantity of Indigenous stories and voices in Canadian media through three main pillars. Its community-journalism trainer program delivers journalism and media training in First Nation communities in northwestern Ontario. It supports emerging Indigenous reporters through internships, bursaries, and professional development opportunities. And it provides training to newsrooms and journalism schools. “Our original target was to train 300 people, and we’ve now trained over 1,600,” says program lead Megan Fowler. “Our goal is to move beyond a one-time training approach and assist with curriculum development and institutional changes that increase the quality of reporting on Indigenous stories.”

Through the program, JHR has also published a number of reports, including Buried Voices and Buried Voices: Changing Tones, which examined the frequency of Indigenous coverage in Ontario media from 2010 to 2013 and from 2013 to 2016, respectively. In 2019, JHR looked at access to post-secondary journalism education for Indigenous youth in Ontario and at what post-secondary journalism programs in the province are doing to implement TRC Call to Action #86, which urges Canadian journalism schools to ensure that students are taught the history of Indigenous people in Canada. This research was published in 2019 in the Emerging Voices report.

(The author received an Emerging Indigenous Reporters scholarship in 2017; TVO.org and JHR are currently partnering on an initiative to support stories from emerging Indigenous journalists in northern Ontario.)

Megan Fowler: Barriers can start at a young age. For example, when you’re trying to access education, and there’s a lack of internet connection, or you don’t have access to a computer, or you just don’t have any nearby schools or programming that are accessible to you. I think something that can be a barrier for any Indigenous person could be the lack of resources. Funding’s always a consideration. That’s an issue for a lot of students, but if you are coming from a remote community, then it can be really expensive to travel back and forth. There’s also the idea that you could be putting yourself in an environment where you could face racism, and I think that is a huge barrier emotionally and spiritually. It can be really hard to knowingly go somewhere you might face that.

TVO.org: JHR found that 31.3 per cent of Indigenous youth interviewed for Emerging Voices indicated that they were interested in studying journalism and/or media at a post-secondary level. What can post-secondary institutions do to make their programs more appealing and accessible to Indigenous students?

Fowler: As Duncan McCue notes in the Emerging Voices report, sometimes Indigenous education is spearheaded by one person, one educator who cares about this issue, and then, if that person leaves, that commitment can be lost, so it really needs to come on a systemic level. There should also be targeted recruitment and supports for students and really engaging with communities. It is important to bring opportunities back into communities and meet people where they’re at, so that they know what is available to them, and they know that, when they take that step, they’re not going to be alone.

Fowler: The training aspect is important. That being said, we don’t want to go into a newsroom, give people JHR training, and then they check off the box and don’t feel like they need to take any further steps. I think when Indigenous people are hired, they are often made to wear a lot of different hats. They’re expected to be doing the training and educating and giving all this background knowledge and history that people really need to be learning for themselves.

That’s part of why we do our training — so that you can enter the newsroom as an Indigenous person and feel like you can do your work and do stories that matter to you and be able to contextualize your stories, which is, I think, a huge obstacle right now. We can at least remove the barrier of having to be the Indigenous expert on the side. But training is really just one step in the process of having good retention policies for Indigenous people. I think there needs to be the workplace-culture side of it, but you need to be able to do your job and tell stories in ways that are meaningful and accurate and reflect your perspectives.

TVO.org: Whether it’s education, internships, or funding — what are some of the biggest factors in setting up Indigenous journalists for success, and how do JHR’s programs address them?

Fowler: We basically tackle all the things that you just mentioned through the Indigenous Reporters Program. We hope that, one day, we’ll be able to move beyond the internships and hiring. I think those are really important opportunities, but, hopefully, we don’t have to shout from the rooftops forever to make sure that BIPOC, Indigenous people, have access to these opportunities. I think you have to flip the question and be like, “So what is everyone doing to actually set up Indigenous people for success?” A lot of it is on the media as a sector and news outlets as employers to ensure there’s a space being created that is safe for Indigenous voices.

Fowler: From what I have heard, just anecdotally, it is partially because of not seeing themselves in the news. They may not actively pursue a career in journalism, because, subconsciously, you don’t see yourself getting into journalism if you don’t see yourself reflected in it. When we’re working in communities, as we’re working through different media-literacy topics, it’s not always hard news journalism. It’s also talking about how these stories about your community — an Elder in your community or going out moose hunting — is a story, and that story is also journalism. There are so many ways to tell a story that fall into this medium. I think some people don’t necessarily recognize that right away and realize that they have important stories, voices, and skills that really align with journalism, but that they can do it in a way that feels authentic to who they are versus having to fit into “the journalism mould.”

TVO.org: This question was prompted by a tweet I saw from Anishinaabe author and journalist Waubgeshig Rice. He wrote that Indigenous voices in journalism “tend to skew too urban.” Could you talk about how JHR supports journalism in communities (as opposed to just urban Indigenous populations), and why you think that’s important?

Fowler: Going into community is really important to us, and it’s not just to get hard news stories into mainstream media. We do a lot of media activities mixed with media literacy. Basically, we’re getting people familiar with using a camera or using a microphone or a recorder. We really want to help where we can, so, if there’s a radio station or a TV station or a community newsletter, ensuring that they have support in that type of programming and creating community news. The program can also train people to be really great interviewees. I think everyone just has to have an opportunity to share their perspectives and there are lots of different ways of doing that.

TVO.org: When JHR is offering training to non-Indigenous journalists or within institutions, what are some of the main pillars of that training?

Fowler: What we do is go through the Truth and Reconciliation Commission, the Missing and Murdered Indigenous Women and Girls final report, and the United Nations Declaration on the Rights of Indigenous People so that we can talk about the calls to action, but we also get into history. You can’t do it all in a few hours, so we try to keep it pretty local. Also, talking about people’s treaty responsibilities and ensuring that they can place themselves in this conversation and understand why it matters to them as non-Indigenous people. We spend a lot of time talking about terminology and ensuring correct language, looking at examples of stories, going through different types of stereotypes and tropes that media tends to rely on when they are telling Indigenous stories.

TVO.org: What are some future goals for the Indigenous Reporters Program?

Fowler: We really want to be able to address the root causes of the systemic barriers and imbalances that are faced by Indigenous voices and stories in media. So, looking beyond hiring, looking beyond internships, looking beyond training — what’s the next step to really ensure that there’s systemic change? I think JHR has done this in a really thoughtful way in that it’s started with smaller projects; it’s built relationships and spends the time where the time needs to be spent. And now I’m really excited to be part of the program at a time when, hopefully, mainstream media is at least aware that these are the issues and also that there are resources out there, and it’s not necessarily asking your Indigenous employees what they should be doing. 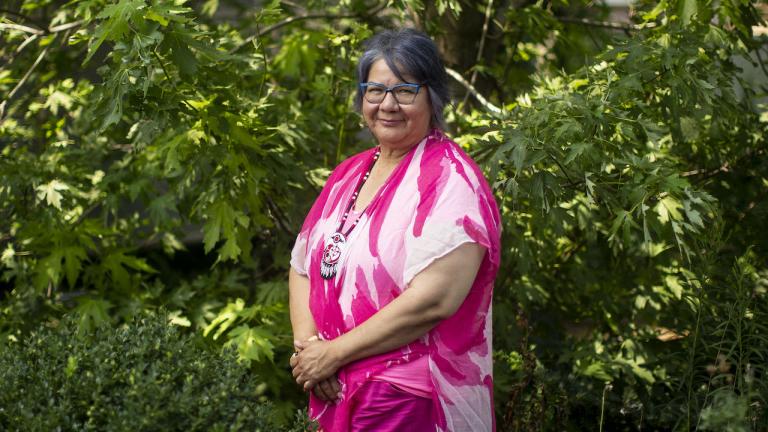