Raucous caucus: A look at the Tories’ first post-election meeting

They were already hooting and hollering by the time the incoming premier’s chief of staff stepped up to the microphone Tuesday morning.

“Premier-designate Ford will be here in just a few minutes,” said Dean French as the cameras rolled and the caucus cheered.

The first meeting of the new Progressive Conservative caucus was a lively affair — understandably so. Not since 1995 has such a large group of Tory MPPs gathered at Queen’s Park after an election (it was 82 back then, for Mike Harris’s first election win; 76 on Tuesday).

And they cheered wildly again when Doug Ford made his way to the podium to remind his fellow Tories of their mission going forward.

“I used to say during the campaign that help is on its way,” Ford began. “I can now tell the people with confidence that help is here.”

Ford had good reason to be happy with what he saw in front of him, and not just because of the PC party’s expanded numbers. Support for the party seemed stubbornly stuck in the mid-30 per cent range with a little more than a week to go in the election campaign. Victory was hardly assured. Plenty of Ontarians were nervous about Ford becoming premier.

But the tide probably turned when Ford held a series of media events surrounded by his team of high-profile candidates. His message was clear: unlike the New Democrats, he seemed to suggest, he would be surrounded by the kind of capable, competent people Ontarians could trust to run the government.

After that, the numbers moved. Ford ended up winning 40 per cent of the total vote on election night, good for the Tories’ first majority government in almost 20 years.

Yesterday’s brief speech and celebration in the presence of the media (which preceded a longer private meeting) was designed to remind everyone what this new government is all about.

“I can tell you this,” Ford said. “The party with the taxpayers’ money is over.”

It was great red meat for the caucus, which responded with even more cheers.

Ontario’s public service didn’t need any hints as to what Ford and his advisers expected to happen immediately. The top-ranking civil servant, Steve Orsini, secretary to the cabinet, sent out an edict to all ministries earlier this week laying out some new rules of the road. Don’t hire anyone new, cancel your subscriptions to magazines and newspapers, don’t think about charging taxpayers for catering, and avoid any out-of-province travel.

Ford’s team also said goodbye to the architect of the current health-care system, the likable deputy minister Bob Bell, who announced his retirement. It’s the clearest signal yet that the Tories intend to change course dramatically on health care by spending less on reorganization and systems and directing more dollars to patient care.

Tuesday’s celebration will almost certainly be a high point of the Ford government’s first term. The room was filled with almost 50 rookies, grateful to be getting their first taste of public life, as well as veteran members thrilled finally to be moving over to the government side of the legislative assembly after nearly 15 years in the opposition wilderness.

John Yakabuski was at the caucus meeting. His first election victory was in 2003, which makes him the longest-serving Tory MPP to have absolutely no experience on the government side. He’ll now get that experience and no doubt a cabinet job to boot.

Someone I spoke to recently used a metaphor to underline the astonishing flow of information and briefings Premier-designate Ford is trying to take in. “It’s like trying to take a sip of water from a fire truck’s hose,” they said. “It’s overwhelming.”

But so far, Ford hasn’t set a bad foot forward. He stood shoulder to shoulder with the federal Liberal government’s foreign minister, Chrystia Freeland, at a news conference last week, during which he excoriated Donald Trump for applying steel and aluminum tariffs ostensibly due to national security concerns.

Ford has also already had a behind-closed-doors meeting with about a dozen of the province’s leading corporate executives. I spoke to one of the people in that meeting, who’d had low expectations for the incoming premier but had left pleasantly surprised. While Ford would be the first to tell you he’s not a deep policy guy, I’m told that the premier-designate was a good listener and that everyone left the meeting feeling buoyed.

Of course, job one for the premier and his team at the moment is picking a cabinet. Fortunately, they appear to have a goodly amount of talent from which to choose. The most important (and most difficult) job will be picking a finance minister, who will need to follow through on the expensive promises Ford made during the campaign while at the same time lowering the deficit — all without raising taxes. If Ford wants an experienced politician who knows the numbers, he could go for Nipissing’s Vic Fedeli. If he wants to make a bit of a splash with a newcomer, he could opt for Ajax’s Rod Phillips or Pickering–Uxbridge’s Peter Bethlenfalvy.

The good news for Ford is that he managed to elect members in every region of the province, from multiple ethnic backgrounds, and with a decent ratio of men to women. As all newcomers must be reminded, cabinet is not a meritocracy. Some less experienced, less politically savvy MPPs will make cabinet because they happen to fulfill another need (geography, gender balance, ethnic representation). But how a premier chooses to balance experience with those other needs varies: Mike Harris’s first cabinet in 1995 included only MPPs with political experience, whether at the provincial or municipal levels. Some future political stars such as Tony Clement and Janet Ecker had to wait before getting in. The idea was, learn how to be an elected politician first — then you can become a minister of the Crown.

The best line of the day came from John Baird, the one-time provincial and federal cabinet minister, who walked back into Queen’s Park today as a member of the Ford transition team.

“It’s a bit like returning to high school,” Baird quipped. “Some of the teachers have gone. But some are still here.”

Ford will be sworn in as Ontario’s 26th premier on June 29. 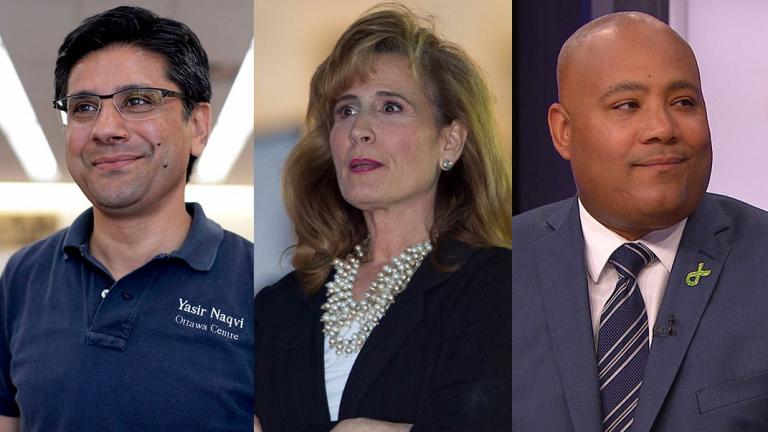 Ontario Election
Can anyone lead the Liberals back from oblivion?
Steve Paikin
sfy39587stp16