Plain out of date: Mapping risk in Ontario's floodplains

Conservation Ontario estimates that about three-quarters of the province's floodplain maps are out of date. The dangers start with property damage and extend as far as potential loss of life
By Tim Alamenciak - Published on Mar 13, 2017
Despite urban development and accelerating climate change, many of Ontario’s flood-plain maps haven't been updated in decades. (Lars Hagberg/CP)

The last time there was a comprehensive update of Canada's flooding maps — which show what land areas might be affected if a waterway overflows its banks or shores — Pierre Trudeau was prime minister and Ontario was nearly 3 million people smaller.

But despite a massive amount of urban development (which can affect the waterways themselves and can change a flood's potential damage); accelerating climate change (which comes with increased risk of flooding); and rapid technological advancement (which allows for more refined tracking of all this); many of those maps haven't been updated in decades. Conservation Ontario, the umbrella agency for all the province’s conservation authorities, estimates that 74 to 78 per cent of the floodplain maps in the province are out of date in some way.

Mapping a floodplain involves looking at the areas surrounding a river or body of water to determine just how much storm and snow-melt runoff will flow into the water body, and running climate models to determine how much flooding would occur due to a spike in that runoff, or to severe storms. 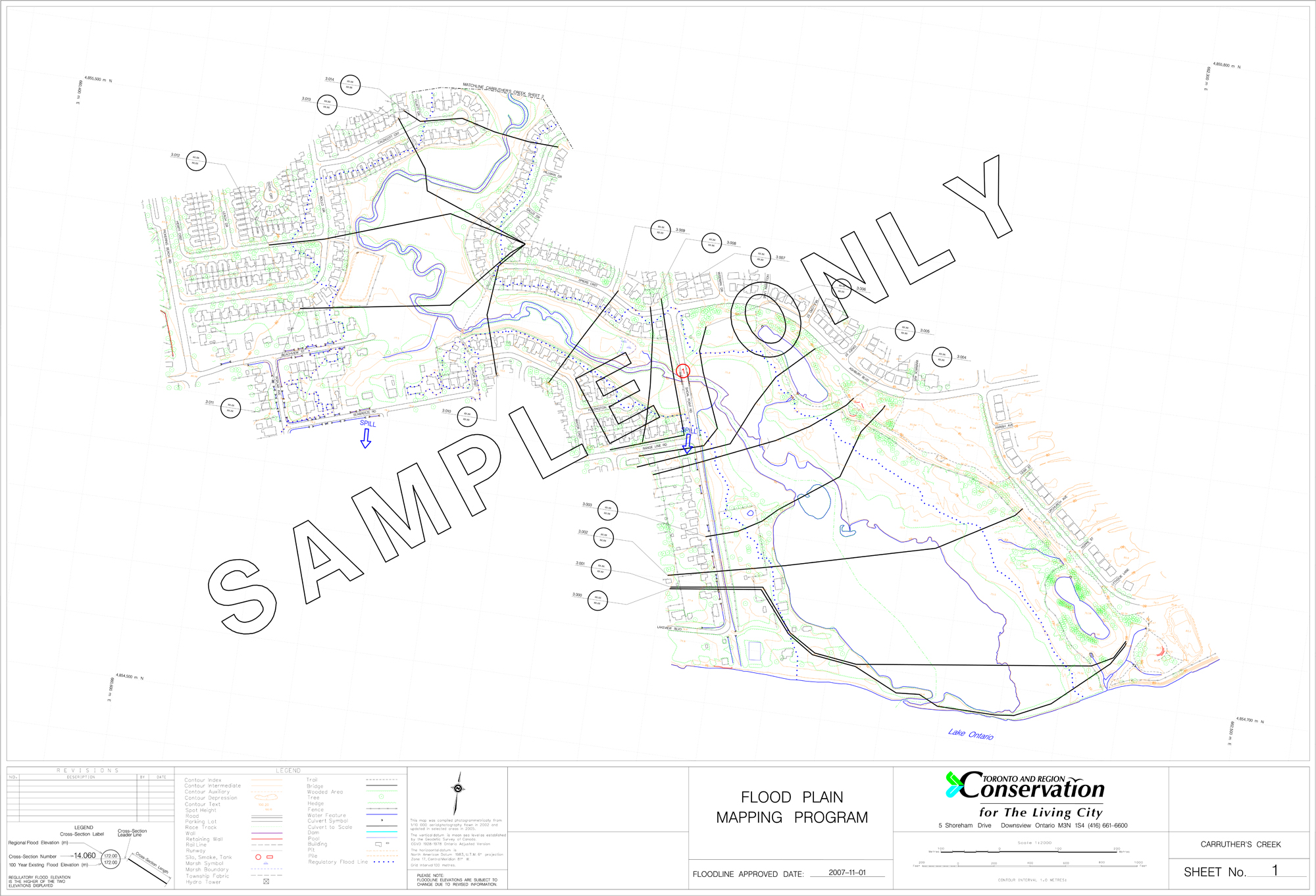 Ontario’s 36 conservation authorities are responsible for much of the province’s natural landscape in southern Ontario, as well as in parts of the north. Part of managing the watershed is maintaining floodplain maps, but many conservation authorities lack the resources or funding to update their own maps. Conservation Ontario reports that the average the floodplain map in the province is from 1991 — a full 25 years' worth of information is missing. In 2013, it issued a report calling for a comprehensive update, warning that “climate change, intensified development, and long term lagging investment in natural hazard structures, tools, and programs now impair Ontario’s ability to maintain existing levels of flood protection and deal with emerging threats.

Conservation Ontario estimates the cost of such an update would be about $136 million — relatively small compared to the damage major flooding can cause. The insurance industry in particular has struggled with understanding the risks posed by flooding, and launched its own mapping project in 2015 in order to allow insurers to start offering flood-protection policies. (Flood insurance is relatively new in Canada, though it has been available in some other jurisdictions for a while.)

“With a warming atmosphere and a slowing jet stream, severe storms can move and essentially dump more and more water in a stationary pattern, which is very difficult to predict,” said Craig Stewart, vice-president of federal affairs with the Insurance Bureau of Canada. “In addition local development such as surface area that has been either paved or simply deforested will affect water runoff. In the last 40 years in southern Ontario there have been significant changes in land use, which will drive changes in flood modelling.”

The insurance bureau’s mapping project gathered enough data for insurers to feel comfortable offering policies, but that information is too low-resolution for land use and urban planning purposes, Stewart says. “The fact that flood events are increasing in frequency and severity and we have maps for land use purposes that are 40 years old, we consider to be a significant problem,” said Stewart. “Governments have not taken the issue seriously enough. Flood mapping information is foundational to be able to inform responsible policies in this area.”

The Toronto Region Conservation Authority is in the minority that has been able — thanks to available funding — to update its flood maps more often. They've done so every 10 years at minimum to account for changes in land use, erosion and climate.

“We have to make sure we have up-to-date flood mapping to inform where development occurs and ensure development is kept at a safe distance from our rivers and streams,” says Sameer Dhalla, associate director of engineering services with the TRCA.

It isn't just a question of mapping flood zones, but also of how mapmakers go about determining risks. Dhalla notes that floodplain mapping in Ontario is traditionally done based on the standard of Hurricane Hazel, the 1954 storm that dumped as much as 200 mm of rain on some parts of the GTA. That standard allows for water volumes greater than rain generally produced by climate change storms, Dhalla says, which has had the fortunate effect of allowing Toronto's maps to accommodate changing weather patterns.

“The flow volume and peaks produced by Hurricane Hazel were very large," Dhalla explains, "and we've been able to protect swathes of our system because of this forward-thinking policy and approach in Ontario."