As the GTA continues to expand, Peterborough is falling into the orbit of Canada’s largest urban centre: How can it reap the benefits of growth while avoiding the pitfalls?
By Will Pearson - Published on Feb 13, 2020
By 2041, the city is expected to grow by 32,000 residents from 2016 levels. (iStock.com/JHVEPhoto)

PETERBOROUGH — On a night in late November last year, the Peterborough-based graphic artist Jeffrey Macklin rolled a batch of posters off his letterpress printer. “PTBO NOT WHiTBY 2.0,” they proclaimed in bright-red ink.

Macklin taped them up in the city’s downtown, his way of giving voice to an anxiety that is becoming more and more common in the city — that unchecked development and urban sprawl from the GTA are threatening, now more than ever, to transform Peterborough into Toronto’s next suburban bedroom community. “We have this urban-sprawl problem,” Macklin says, referring to the thousands of subdivision lots on the edge of the city that have been approved in recent years.

This may sound like a familiar story to anyone else in Ontario’s Golden Horseshoe region, but, for Peterborough, it’s a reality that has begun to take shape only recently. The city once felt relatively isolated from the GTA, insulated by its placement on the other side of the Greenbelt, a swath of land protected from development by the provincial government. But, as the GTA continues to expand, Peterborough is quickly falling into the orbit of Canada’s largest urban centre, causing a reckoning among elected leaders and community members alike over how to reap the benefits of growth while avoiding its pitfalls.

The city’s ambivalence to its own growth was on display last December, when the extension of the 407 toll highway opened after years of construction, connecting it to Highway 115 about 50 kilometres south of Peterborough and making travel to the GTA much quicker (for a price).

“I think people are mixed” about the 407, says Ian Attridge, co-coordinator of Reimagine Peterborough, a grassroots organization that engages citizens around issues of urban planning. “They’re saying, ‘Oh, that’s kind of neat,’ but they’re also wondering how that will change the character and feel of Peterborough.”

When the highway extension opened, the MPP for Peterborough–Kawartha, Dave Smith, heralded it as a vital link that will “help attract jobs and economic growth to this region.” Rhonda Keenan, president of Peterborough and the Kawarthas Economic Development, had already expressed a similar sentiment.

But others are concerned that the new highway — and the eastward expansion of the GTA it represents — threatens to erase what they value most about their community: easy access to natural areas, convenient walking and biking, relative affordability, and a distinctive arts scene.

“I think for a long time [Peterborough] was a bit of a hidden gem,” says Mayor Diane Therrien, “but it’s not anymore. It’s been discovered.” Therrien says that the quality of life that’s possible in Peterborough and the inexpensiveness of its housing relative to the Toronto market are two factors that encourage people to move here from the GTA. Businesses, she notes, have also relocated to the city, attracted by the quality of life it offers their employees. The challenge facing Peterborough now, Therrien says, is figuring out how to “balance that growth dynamic with taking care of all the folks that are here already,” all while “making sure that we retain all the things that make Peterborough special as a small town.”

And that challenge will only intensify over the coming decades. Between 2017 and 2018, according to Statistics Canada, the Peterborough census metropolitan area increased by 3.1 per cent — the fastest rate in the country. By 2041, the city is expected to grow by 32,000 residents from 2016 levels, making for a population increase of about 40 per cent.

Attridge is uncertain how the next few years of development will play out. “The city’s changing, and it always will change,” he acknowledges. But he wonders whether such “citizen values” as greenspace and social inclusion will be reflected in the planning process as the city grows or whether it will become an example of what he calls the “Oshawa effect” — “like those other areas that are so car-dominated and really monocultural that [lose their] distinctive character.”

Part of the uncertainty comes from the fact that the City of Peterborough’s official plan — the municipal document that guides development throughout the city — hasn’t seen a major update since 1981, although councils have made almost 200 piecemeal amendments over the years. City leaders and citizens agree that getting a new plan in place is one of the most important ways to prepare for the coming growth.

A draft of the new official plan, released last summer, pays increased attention to principles of modern urban design. Transit-supportive densities, intensification of built-up areas, and planning for mixed-use, complete communities that make cars less essential are all called for. While the plan has been delayed numerous times, the city expects it to be finalized this year.

But with many thousands of subdivision lots already approved in recent years and in various stages of construction or design, residents such as Macklin worry it’s too late. “It’s probably fallen through our fingers already,” he says.

Attridge agrees that the recent focus on subdivision development likely means the city will struggle to achieve the density targets that will be laid out in the official plan. “But I don’t agree that it’s too late to plan for complete communities,” he says. There’s still time to ensure those subdivisions are planned so that residents will have close access to the services and amenities they need, Attridge believes.

For some city councillors, expanding the city outward is just as much a necessity as densification. Long-time councillor Henry Clarke says the biggest barrier facing Peterborough as it grows is a lack of land. “We do not have any employment lands to speak of,” he says, “and that is inhibiting our ability to attract the kind of jobs that a lot of people would like to have here.” He’d like to see the city expand its boundaries, particularly westward (though other councillors have suggested expanding in other directions), in order to free up more space for development. “There’s a difference between growth and sprawl,” Clarke says. “Even with intensification, with the pressures of population growth, and so forth, you still need appropriate lands.”

Attridge isn’t convinced. “Expanding any municipality beyond its core is much more expensive” than building up within the boundary, he says, and he suspects that the kinds of employers who might use large swaths of land on the city’s outskirts are becoming less and less common as North America deindustrializes. As for housing, “We’ve demonstrated we’ve got plenty of room to build new residential units in the city within the current boundaries,” he says.

What’s clear is that Peterborough does need affordable residential units: property values are spiking, and the city is in the middle of a severe housing crisis. Last summer, a lack of shelter space led dozens of homeless people to set up camp in a park downtown, just one block away from a controversial luxury-condo development.

Christian Harvey, the executive director of One City Peterborough, a housing non-profit, forsees “an increase in housing precarity and homelessness” if the rising real-estate market isn’t mitigated somehow. And he says that his clients, many of whom have experienced chronic homelessness, are also connecting the dots between their experience and the city’s rapid development: “They say, ‘We just keep seeing really high-end housing and apartments and condos go up and nothing that will help us. Everything being built is never going to be in our range.’”

Therrien acknowledges there’s “a bit of resentment” in the community toward those who move from the GTA and are perceived to be driving up local housing costs. “I think it’s only going to continue to be contentious and problematic,” she says, “until we figure out how to alleviate the housing crisis, the transportation crisis, and a lot of these things that we’re dealing with.”

As for Macklin, the graphic artist — he isn’t done advocating for the kind of city he wants to live in, even though he’s uncertain he’ll succeed. “I don’t think we can stop it,” he says. “We just have to curb it as much as we can.”

Will Pearson
Description
Will Pearson is a freelance journalist based in Peterborough.
Follow @quillpearson

Eastern
A year after Flight 752 was shot down, Canadian families are still seeking justice
Shortly after the flight from Tehran to Kyiv claimed dozens of Canadian lives, COVID-19 took over the news cycle. But victims’ friends and relatives continue their fight for answers — and accountability.
Marsha McLeod

Eastern
‘A crisis of capacity’: Ontario faces slaughterhouse scarcity during COVID-19
Marsha McLeod
Eastern
Why Was a Child Shot Near Lindsay? 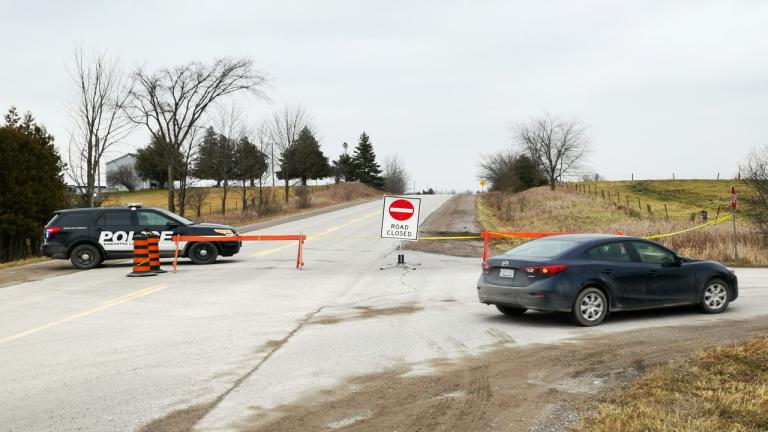 Eastern
The SIU is investigating the death of an infant. Here’s what we know
Marsha McLeod
sfy39587stp16