Offshore wind turbines are coming to the Great Lakes, whether Ontario wants them or not.

A comprehensive report on offshore wind from the U.S. Department of Energy and Department of the Interior is calling for up to 86,000 megawatts of projects to be developed by 2050 to help that country wean itself off coal. That would generate enough emission-free electricity to supply Ontario’s needs four times over — at least when the wind blows, which it does over open water more than a third of the time.

But this isn’t just a matter of developing wind capacity off the Atlantic or Pacific coasts. The report says about 15 per cent of the development could take place on the U.S. side of the Great Lakes. To put that in perspective, that's more than all the onshore wind installed in Canada to date.

Intentions south of the border raise questions about Ontario’s relationship to offshore wind, which could be roughly summarized as a love-hate affair.

Not long ago, the province wanted to lead the North American wind market. In early 2008, after studying the environmental risks, then-natural resources minister Donna Cansfield felt comfortable enough to lift a temporary ban on Great Lakes development and declare Ontario “open for business on offshore wind.”

The province, with its highly skilled workforce and industrial capacity, imagined this might lead to the creation of a new economic hub. In this ideal scenario, projects would start popping up on the Canadian side of the Great Lakes, beginning with Lake Ontario and Lake Erie. A big turbine manufacturer, perhaps from Europe, would set up shop in southern Ontario, and around it would emerge a supply chain of local steel and concrete suppliers, engineering firms and trades, transportation service companies, and other related businesses.

The thinking was that Ontario — which borders four of five Great Lakes — had a unique opportunity to make the most of its geography, move early and establish itself as a centre of excellence, and then export its knowledge and products as the rest of the continent caught up. The government was so keen that when it launched its feed-in-tariff initiative for renewable power in the fall of 2009, it took the bold move of including both onshore and offshore wind in the program.

But after 18 months of building up industry expectations, the pendulum swung. In Feb. 2011 the government re-imposed a moratorium on wind development, citing the need for more environmental study. “Ontario will work with our U.S. neighbours on research to ensure any future proposed projects protect the environment on both sides of the Great Lakes,” the environment ministry said at the time.

Brad Duguid, then energy minister, dismissed any notion that the moratorium was to appease a small but vocal group of anti-wind voters in Liberal ridings. NDP energy critic Peter Tabuns wasn’t buying it, telling the Waterloo Record that the new moratorium had nothing to do with environmental concerns or technical challenges. “It’s a smokescreen, a scientific fig-leaf for them just sort of flailing around trying to figure out what to do next in a pre-election period.”

Today, the offshore wind file in Ontario is a mess. One developer who felt mistreated has taken the province to court, while another is seeking damages through a trade tribunal. Allegations that the government destroyed documents relating to the 2011 moratorium have sparked an OPP probe. And after more than five years of additional study the moratorium remains in place, and it appears it won’t be lifted anytime soon. That the energy ministry has just cancelled plans to procure another 1,000 megawatts of solar and onshore wind suggests that offshore wind ambitions are unlikely to be rekindled anytime soon.

Meanwhile, enthusiasm for offshore wind south of the border continues to grow, and was buoyed this summer by the completion of the five-turbine Block Island Wind Farm off the coast of Rhode Island. That project, the first built in North American waters, is expected to be followed in 2018 by a Great Lakes first: the Icebreaker wind farm in Lake Erie. 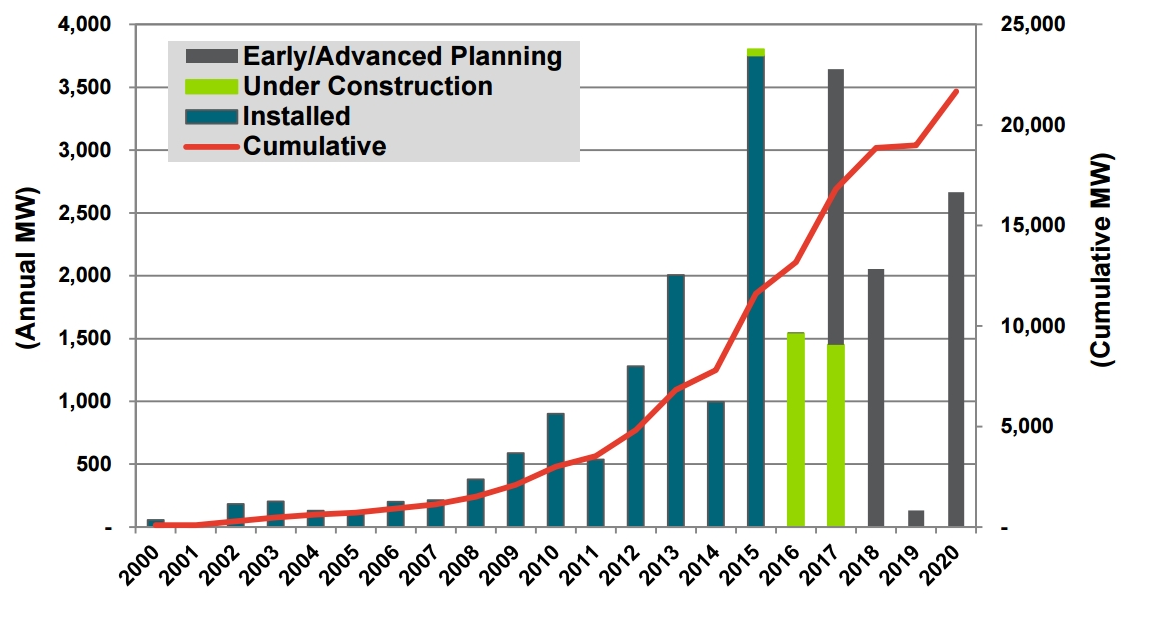 Ohio-based Lake Erie Energy Development Corporation (LEEDCo) is developing the pilot project, which will be composed of six turbines installed about 13 kilometres off the shores of Cleveland. In May, the U.S. energy department identified it as one of three U.S. offshore projects to qualify for $40 million in federal funding support.

One might conclude that the U.S., by pushing ahead with offshore wind in the Great Lakes, has not yet thoroughly studied the environmental risks and is looking past Ontario’s concerns, which include effects on water quality, marine life and bird migration. Even the Department of Energy report boosting offshore wind energy recognizes that a lot still isn’t known and that “data gaps associated with environmental impacts need to be addressed.”

But it also pointed out that getting a full and accurate picture of environmental risks, and ways of managing them, requires directly testing the waters, not just studying them from a distance. In other words, they need empirical data about how offshore wind actually works when they try it out.

“The first generation of installed projects will help to establish and validate the actual effects and impacts of offshore wind development on biological communities, and narrow the range of potential effects that need to be monitored or mitigated at a given site,” the report states.  “Collecting field data on impact-producing factors like construc­tion noise and how these factors affect resources of concern like marine life will help to verify impact assumptions.”

Armed with that kind of field data, regulators are more likely to craft rules and approaches to oversight that are effective, the report concluded. They can also more accurately identify “exclusion zones” where offshore development is inappropriate and would be prohibited.

LEEDCo, for example, believes it can demonstrate a way to erect turbines in Lake Erie without much disturbance to lakebed sediments. The conventional approach is to pile-drive massive concrete-filled steel pipes into bedrock on a lake floor. It takes a lot of time and resources, and causes significant noise. A bigger concern is that it stirs up deep layers of lakebed muck, which can release pollutants with the potential to harm aquatic life and water quality.

As an alternative, LEEDCo plans to employ “mono bucket” technology that has been used by the offshore oil and gas industries for 30 years. This involves carefully lowering what is essentially a 400-tonne upside-down metal bucket into the lakebed so that it forms a seal with the muck. Air is then extracted from the bucket, creating a suction-like effect that holds the structure firmly in place. It results in relatively little disturbance and noise, and doesn’t require the pouring of concrete, president Lorry Wagner says.

The offshore wind market is booming globally. More than 15,000 megawatts were installed by the end of 2015, with 25 per cent of that coming online last year alone, according to Navigant Research. Most of that development has taken place in the United Kingdom and Germany, and the growth has helped to significantly drive down costs while increasing understanding of how the technology works. With offshore wind now more affordable, U.S. interest in it is growing.

It’s unclear why Ontario isn’t taking the same learn-by-doing approach in collaboration with its southern neighbours. Doing so — for example, allowing and closely monitoring one or two small pilot projects — wouldn’t render the province “open for business” and allow unfettered offshore wind farms. What it arguably would do is dramatically improve Ontario’s understanding of offshore wind in the Great Lakes, and better position the province for what could become a major industrial opportunity in the region.

Read more: The Great Lakes: An ecosystem in peril