Ontario businesses are flourishing in China

​Ontario has more of a presence in China than most people think, and in some ways, a greater footprint there even than British Columbia, researchers at the University of Toronto’s Munk School of Global Affairs have found.

“We need to get beyond the traditional way of looking at exporters and trade to see that in the digital economy, there’s a lot happening that may not be counted,” says Deanna Horton, a fellow at the Munk School and the project’s lead.

The research team found that 60 per cent of Ontario businesses in China are service-related (offering intangible products such as banking, consulting, insurance, or technology) — which puts it ahead of all other provinces. And more than half of all Ontario companies there are in the tech industry. “This is a great news story for Ontario,” Horton says. “And I think it’s something that Ontario needs to talk about more. These are the companies of the future.”

Provincial and federal leaders have a history of seeking out business opportunities in Asia, but interest seems to be increasing: on Ontario Premier Kathleen Wynne’s current Asian tour — her third as premier— she has announced $1.9 billion in new business agreements in China, which she says will produce 2,100 new jobs in Ontario.

Prime Minister Trudeau is also in China this week. While the announcement of the start of free-trade negotiations between Canada and China is now less than certain, the trip is still seen as way for Canada to diversify its trade and increase business opportunities for Canadian companies.

Here are some highlights from the Munk research project.

Ontario’s exports totalled more than $205 billion in 2016. China was the fourth-largest recipient of Ontario exports, importing about $2.83 billion of what Ontarians were selling, or 1.38 per cent of the province’s total exports.

British Columbia, on the other hand, sends almost a fifth of its commodity exports, valued at more than $5.95 billion, to China.

The Munk research notes that B.C.’s exports are double those of Ontario, but also points out that Ontario businesses have twice as many locations in China and Hong Kong — 307 to B.C.’s 147. 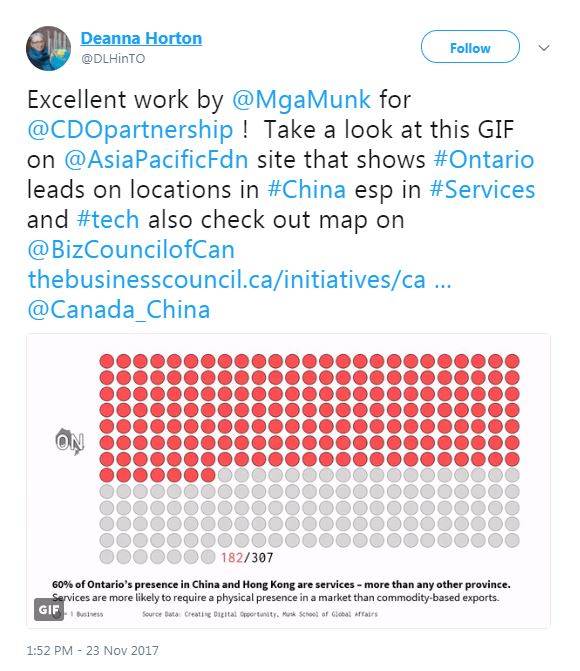 “If you use location-based data, you get a very different picture of a commercial relationship,” Horton says. “I think almost everyone assumed that in Asia, that it would be British Columbia with the largest number of locations. And that’s not true for any part of the data set. Ontario is the clear leader.”

Horton says that Ontario is out in front because of its strength in technology and other service companies. “If you are a manufacturer, or if you are a commodity-based exporter, you might not have to have a location in the country, and in fact a lot of them don’t, because they work through importers or trading companies, whereas services companies often have to have a location because they need to service their clients who happen to be in China or elsewhere in Asia.”

It’s also about the size of the Ontario economy. “B.C. has a strong tech sector as well … but Ontario is the largest economy in Canada, so it’s not surprising, from that perspective, that they have the largest presence.”

Finally, services provided out of country are not necessarily counted when we think about exports. And the way we measure what’s made here but sold elsewhere has not necessarily kept up with digital advancements. “The statistics on services are not complete,” Horton says. “I think most people recognize that there are gaps. So in that case, then, this would be one way of filling in the gap.”

Because large firms are able to scale up and have more resources, people may assume that a company has to be a certain size to export or move into foreign markets. Not so, says Horton.

Her research shows that of all the Canadian high-tech firms in Asia, more than three-quarters are small- and medium-sized enterprises. “One always thinks that companies, especially small companies, when they expand internationally, they go to the U.S. first, and then they go elsewhere,” Horton says. “But the digital economy is different. Companies are going global from a very early stage. In some cases, when you’re thinking about what going global means, for some of these companies, sometimes it’s just a small office with a few people in another country. So it’s not as complex as if you’re a manufacturer obviously.”

Horton’s research is still ongoing in this area, but she says there are a few reasons why small tech firms are choosing Asia: They’re following their clients. And they can partner with local organizations in the host country. She initially thought there would be a large diaspora connection, too. “There is some of that,” she says, “but not as much as I thought there would be. But this is something that, when we do the interviews in China, we will find out more about.”

The Munk researchers have created an interactive map that documents Canada’s presence in Asia, both in business and in other sectors, such as education services. 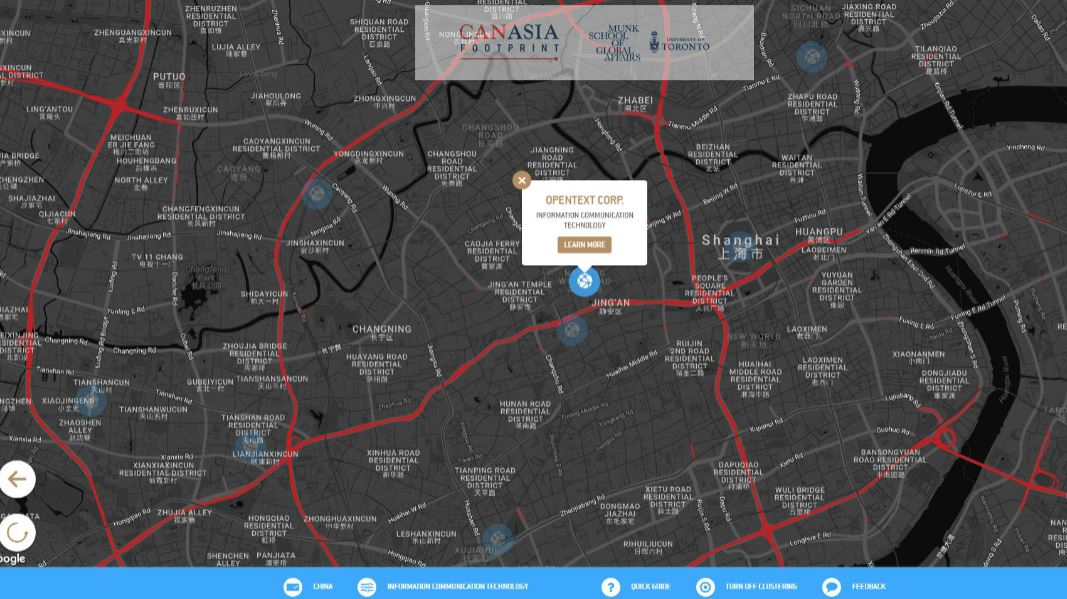 Horton says she hopes businesses, job seekers, and governments will use the interactive map to help with decision-making.

Businesses looking to expand internationally could use the map to find out which other companies in their industry are already in certain markets, or to seek out potential partners or clients in target countries.

If you’re looking for a job, the map could tell you what Canadian companies are based where.

And Horton says that the information is important from a public policy perspective because it showcases Canadian firms. “It’s in our interests, it’s in Ontario’s interest, and it’s in Canada’s interest that companies scale up. The Canadian market is, for many companies, too small. So to get the scale up that they need, they need to go into international markets, and they need to see who else is out there and be inspired to do the same.”

Correction: An earlier version of this article stated that Ontario’s exports totalled more than $2 trillion in 2016. The figure is actually more than $205 billion.

Election Canada 2021
ON the campaign trail: The week that was (September 13-17)
Daniel Kitts