The province has pledged millions to fight the opioid crisis, but only a fraction of that will go to the North
By Jon Thompson - Published on Oct 13, 2017
Eabametoong First Nation was one of the first northwestern communities to experience widespread opioid addiction. (Jon Thompson)

THUNDER BAY — Those who have been fighting the opioid crisis in northwestern Ontario for more than a decade say that while they have seen some progress, the situation remains critical — and they’re not getting adequate support from the provincial or federal governments.

Elizabeth Atlookan was the health director of Eabametoong First Nation (also known as Fort Hope) in 2010, when “epidemic” misuse of prescription opioids prompted its leadership to declare a state of emergency. At the time, she estimated that between 70 and 80 per cent of adults in her community, located 360 kilometres northeast of Thunder Bay, were in some stage of addiction.

The declaration came a year after the Nishnawbe Aski Nation, which represents 49 First Nations in Ontario’s far north, declared a region-wide state of emergency.

“[Addiction] crippled everything: home life, education, workwise, the criminal activity associated with that — break-ins, robberies,” Atlookan recalls. “Families were in crisis. Children did not have food. Their toys were sold. Their beds were sold. A lot of the homes had no furniture. They were all sold for their addiction.”

Eabametoong was among the first communities in Ontario to experience widespread opioid addiction. Health Canada had no program in place to help. Local health workers enlisted a doctor and a nurse as they converted a three-bedroom home into a detoxification health centre.

In 2007, Health Canada approved Suboxone, a drug that combines naloxone with buprenorphine, to treat opioid dependence — but years later, the national Non-Insured Health Benefits program, which provides benefits to First Nations and Inuit people, still wasn’t including it in its coverage. That same year, the NIHB reported that First Nations people were being prescribed opiate-based painkillers at a rate of 898 per 1,000 patients — a third more frequently than non-First Nations Ontarians.

In 2011 Mae Katt, the nurse practitioner for the all-Indigenous Dennis Franklin Cromarty High School in Thunder Bay, started bringing in Suboxone from the south. She developed an innovative care program — the first of its kind in Canada — for addicted students, many of whom come from remote communities. A group of 63 students, or 43 per cent of DFC’s student body, was given Suboxone twice daily. In some cases, it took as little as a month for them to wean themselves off of oxycodone, and in others, as long as two years. But she says every student returned to the far north no longer using drugs.

While she’s a strong advocate of Suboxone, she points to holistic care as the cornerstone of her program, and the primary reason for its success.

“But we also taught them about their culture,” she adds. “We had elders involved in our school communities. We helped them get through the shame they were feeling from the things they had to do when they were doing drugs. They had burned some bridges, so we helped them re-engage with their families.”

Katt also successfully appealed to the federal government to license Suboxone on a pilot basis in northwestern Ontario’s remote First Nations. In the most severely affected community, Katt says, only eight people were not using opiates.

Six communities took part, and the medical studies that followed confirmed Suboxone’s effectiveness: within only 30 days, 95 per cent of participants had migrated to the opiate alternative.

Atlookan, now Eabametoong’s chief, estimates that the opiate-dependent share of her community’s population has dropped to one in every two adults. The Suboxone program, which had 180 clients at its peak, now serves 130. She sees more children in school, more jobs being filled, more food being bought at the grocery store; patients now present themselves at the health station in earlier stages of illness, and the police are making fewer arrests.

But substitutes like methadone and Suboxone are addictive, and those prescribed it often need support to transition into sobriety.

“This is still a problem, the weaning process.” Atlookan says. “We’re still working toward getting professional mental health — the aftercare. The mental health in northern communities is not being met. We have layers of trauma. When you talk about (Post-Traumatic Stress Disorder), if it’s not dealt with in a small community, we’re connected, so whatever happens, we all feel that.”

Katt agrees, noting that it was the communities with the worst suicide rates in the 1990s that seemed to suffer the worst rates of opiate addiction in the decades that followed.  “Had [the federal government] responded to the suicide crisis, we never would have seen the drug crisis to how big it is. Eighty per cent of a community addicted to oxycodone is crazy.”

When Gary Kaminawatamin admitted himself to Kenora’s Morningstar Detox Centre in 2011, he estimates that 80 per cent of residents in his home of Bearskin Lake First Nation, located 425 kilometres north of Sioux Lookout, were also addicted to oxycodone. He quit the drug as soon as he arrived at the centre and then stayed for 10 days, experiencing intense withdrawal symptoms. When he returned home, he found he had lost his job and become a target of public scrutiny.

“I was blacklisted,” he recalls. “I was on the verge of starting to deal [drugs] again, and I knew if I started dealing again, I would start using again.”

Kaminawatamin stabilized his sobriety through a weightlifting and physical training program created by local police officers — a regimen that motivates him to this day. He won a seat on Bearskin Lake’s council and now frequently hands out Suboxone at the local clinic to show others they can also turn their lives around.

Those employed by the First Nation now have stipulations in their contracts that promise their jobs will be held if they seek treatment for drug addiction. But they have access to few supports when they get home. “Doctors are saying we need aftercare, but there’s no funding. After six months, it got put off. We wrote a new proposal, but it got put on a shelf for three months. Over that three months, cocaine is coming into the community,” he says.

“It’s becoming bad because some of the children are starting to show some of the effects of not being fed, not being watched. Family is coming in and saying there’s a lot of fighting. They’re the issues of having drugs in the community, and you can see it.”

In late August, Minister of Health and Long-Term Care Eric Hoskins pledged $222 million over the next two and a half years to combat the crisis across the province. Of the $21 million that will become available before the end of the year, northwestern Ontario will receive $1.65 million for harm-reduction initiatives, $75,000 of which will be used to hire new harm-reduction outreach workers for the region.

But if the proportion of the total harm-reduction funding earmarked for the region remains constant over the next two and half years, the northwest will end up receiving only 2.7 per cent of the total provincial commitment — even though its small, widely dispersed communities often require increased programming costs.

“We’re not getting our fair share,” Katt says. “When you look at how you designate fair share, it shouldn’t just be on population, because we’ll lose every time.”

Bruce Siciliano is the mental health and addictions vice president of the Lake of the Woods Hospital in Kenora. His portfolio includes Morningstar, which last year dispensed 455,192 needles in a town of 15,000 people — the highest-exchange rate per capita in the region. It’s even higher than facilities in Thunder Bay, where each year 30 per cent of babies born at the hospital are affected by a mother’s opioid dependence during pregnancy.

“With the seriously marginalized, we see polysubstance use [the use of multiple drugs] in our practice every day, and because they’re so connected to trauma, residential school, poverty, racism, the high suicide rates, and all that, we’re not just talking about outpatient counselling,” he says. “We’re not even talking about something as simple as patient treatment. We’re talking about long-term supportive interventions that could last years. One and a half million dollars? It’s not even close.”

Indigenous
‘Trust has been broken’: Pikangikum First Nation, the OPP, and the future of policing

After expelling the OPP from the community, chief and council say they want to establish their own police force. What would that involve — and how could the system be changed? 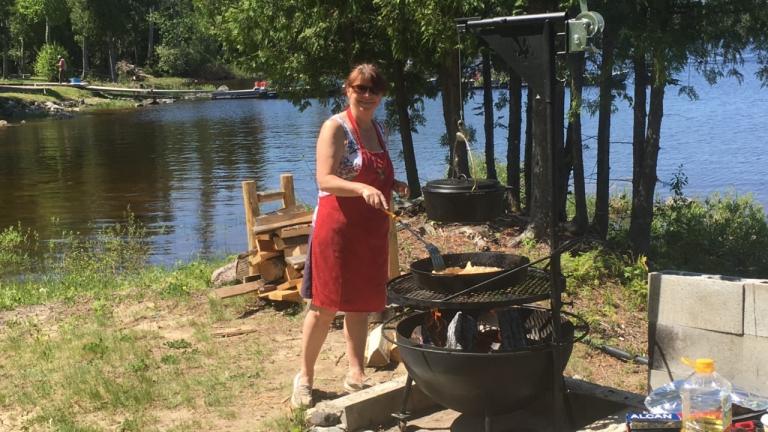