By Tim Alamenciak - Published on Sep 30, 2016
The government says it completed all actions in Nipigon Bay, an Area of Concern on Lake Superior's north shore, but one item is outstanding.

In 1987 the Canadian and American governments agreed on a strategy for trying to reverse some of the extensive damage that had been done to the Great Lakes. Their approach: identify and list what are called Areas of Concern (AOCs), and focus on restoring habitats in those areas, eventually removing each from the list as it is rehabilitated. A total of 43 areas were identified, 17 of which were in Ontario.

Years elapsed during which little action was taken on either side of the border. Then, in 2010, the United States launched the Great Lakes Restoration Initiative, kicking its efforts into gear. It has since spent over $1.9 billion and delisted three AOCs.

The two governments agreed in 2012 to issue reports every three years, detailing each country's progress. The first of these reports was jointly issued this week by the U.S. Environmental Protection Agency (EPA) and Environment and Climate Change Canada. In it, Canada writes that it has completed "all required actions" for the cleanup in Lake Superior's Nipigon Bay — the only Canadian Area of Concern mentioned as having all remediation work complete. The plan for the area east of Thunder Bay has included constructing a new, more sophisticated sewage treatment plant since at least 1995.

This has not happened, confirm a Red Rock councillor, the township’s acting head of public works, its chief administrative officer and the Ontario Clean Water Agency, which is managing the project. Workers haven't even broken ground on the new plant —which is not scheduled for completion until 2018, and which local officials already say will go over budget.

"We have just completed 90% … of design drawing" for the new plant, Red Rock's chief administrative officer, Kal Pristanski, wrote in an email on Friday, two days after the governmental report was released. He added that it "may have been premature" to say all actions have been completed in Nipigon Bay, and wrote that while he did "not want to downplay the work of the Remedial Action Plan Committee [an arm's length group] — they have worked tirelessly for over 20 years to clean up the bay and have done great things — but waiting for the [plant] to be actually built might have been better."

Environment and Climate Change Canada has not responded to numerous requests for comment from TVO.org made both by phone and over email. Pete Cassell, a press officer with the EPA, said in an interview that "We'd defer to Canada as to why they listed [Nipigon Bay]." 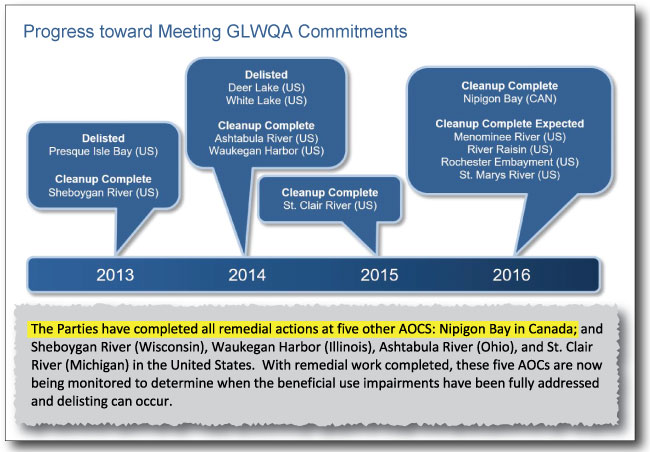 The report was released ahead of next week’s public forum on the Great Lakes, during which experts from Environment Canada and the EPA will discuss the state of the lakes.

Without Nipigon Bay, the report would show only incremental progress made in remediating Canadian Areas of Concerns, while several American AOCs have been fully delisted.

There is also a striking gap in the amount of money each country is putting toward Great Lakes rehabilitation. The U.S. has spent about $300 million a year on Great Lakes restoration since 2010. The Canadian and provincial governments combined have been spending about $17 million a year on the AOCs in general, and spent additional funds on specific projects such as $46.3 million to clean up Randle Reef in Hamilton — still far less, in total, than the Americans.

"This reflects the ongoing problem of inadequate funding to the Great Lakes on the Canadian side," says Theresa McClenaghan, executive director and counsel at the Canadian Environmental Law Association. "There's been a huge disparity for years and decades [between] the amount of money that Canada spends on Great Lakes protection and restoration and the U.S. spends. I'm quite startled by that news, to be honest."

The federal government has agreed to put $9 million toward the new Red Rock sewage plant. It won't be enough, according to Pristanski, the Red Rock administrator.

“The cost of the project has skyrocketed to well over the $9 million originally allocated," he wrote. Moreover, because the government report boasted about progress in Nipigon Bay, he worries this will make it more difficult to get the rest of the money Red Rock will need to finish the plant: "[G]etting additional funding may be impaired as the 'urgency' to clean up the bay is now lifted.  It was a great stick for the town to get politicians' attention."

The report is precise in its language: the EPA made special note that remedial action was still underway in River Raisin, Mich., even though that work is ongoing and scheduled to be finished in November, making sure to list it separately from completed projects. It’s unclear why Environment Canada makes no mention the Red Rock sewage plant is still in development rather than complete.

"If we assume they did just make a mistake, that’s a fairly significant mistake. It means we should be worried that the government is not paying enough attention. Even if it’s not a deliberate error, it’s just sloppy. Either one is a problem."

Jim Bailey, the remedial action plan coordinator for Nipigon Bay, said the sewage treatment plant wasn’t part of the original plan for rehabilitating the area, and was added after public consultation. Bailey works for Lakehead University, one of the organizations involved in implementing the plan, and does not work or speak for Environment Canada.

The upgrade of the Red Rock water treatment facility has been part of the remedial action plan since at least 1995, according to a document on the International Joint Commission website. (The IJC is a U.S.-Canadian organization that monitors both countries' actions on shared waters.)

Environment Canada lists the plant prominently on its information page for the Nipigon Bay AOC.

“The final action required to restore water quality and ecosystem health in the Nipigon Bay AOC is to upgrade the Township of Red Rock’s water pollution control plant to secondary treatment. The upgrades are set to begin in 2014,” reads the website, which says it was last updated in March 2014.

Read more: The Great Lakes: An ecosystem in peril